Is television finally starting to represent the real Chicago?

In the premiere episode of the already critically acclaimed The Chi, a fresh-faced, precocious African-American teen is shot to death on the streets of Chicago’s South Side. After lifting a gold chain and sneakers from a dead body, an affable teen named Coogie, portrayed by Jahking Guillory later runs into the deceased boy’s stepfather, Ronnie (Ntare Guma Mbaho Mwine) — he’s racked with grief and looking for payback. Coogie tries to reason with the man, but it’s too late.

A gun goes off, and Coogie is left stretched on the pavement, bleeding to death. There are no heroes and no villains. It’s a devastating moment. And while it seems in line with all-too-familiar real-life headlines associated with the South Side, things are more complex and nuanced on The Chi.

Chicago has struggled to shake off a rep as America’s most dangerous city. According to a recent USA Today piece, 650 people were killed in the city in 2017, a 15 percent drop from 771 people in 2016. And for much of last year, the Windy City didn’t even rank among the highest murder rates in the country: St. Louis; Baltimore; New Orleans; Detroit; Kansas City, Missouri; Memphis, Tennessee; and Cleveland. Chicago did, though, surpass New York and Los Angeles’ combined murder rates for the second straight year. And most of these murders happen on the predominantly black West and South sides.

There was comedic gold in the lives of everyday, hardworking, blue-collar black folk.

“[Chicago] is not a jungle,” she said a few weeks ago on CBS This Morning. “It’s not a bunch of hooligans with no hearts and no souls. Every black boy isn’t born with a gun in his right hand and a pile of drugs in his left. They’re born with the same amount of hope and joy as every other little baby in the world.”

Hollywood has had a long, complex history with regard to its portrayal of Chicago — and way before today’s gang issues, it’s very often been about the city’s infamous gangster side. Starting with 1931’s Little Caesar (Edward G. Robinson as a not-so-subtle stand-in for the Chi’s Al Capone), it’s taken years for the city to transcend its image of a lawless town under siege by gunfights and political corruption.

There were struggles, but Florida and James Evans instilled family values and a strong moral code into their three children. But the controversial death of James, Good Times’ lone father figure, had critics crying foul. And it didn’t help when the catchphrase-wielding J.J. Evans — Dynomite!!! — was pushed front and center as the show’s reigning star.

The Chi is executive produced by both Waithe and rapper/actor Common, a fellow Chicago native. The 10 episodes are directed by Rick Famuyiwa of the film Dope, as well as behind-the-camera talent that includes Tanya Hamilton (Night Catches Us), Dave Rodriguez (TNT’s Animal Kingdom and USA’s Queen of the South) and Roxann Dawson (Netflix’s House of Cards, PBS’ Mercy and ABC’s Scandal).

This is not to say that The Chi doesn’t delve into hard-knock realities. There’s a distinct feel in its scripts and in the acting that you won’t find on such procedural dramas as the Dick Wolf-produced Chicago Fire, Chicago P.D., and Chicago Med — so vanilla, so pedestrian that they may as well have been set in Any City USA.

Showtime’s long-running Shameless (shot largely in Los Angeles) follows a dysfunctional yet tight-knit white family in the North Lawndale section of the South Side. And CBS’ formulaic “Chicago” sitcom Superior Donuts revels in the diversity of its black, white, Latino and Middle Eastern cast members. But it doesn’t aim for the idiosyncrasies of The Chi, filmed on the South Side, giving it a rich, textured feel, and the narrative is ignited by the murder of a promising young basketball player.

Frustrated law enforcement officers struggle for answers in a neighborhood weary and distrustful of cops. This is a city, in real life, that has been embroiled in a series of high-profile police brutality scandals. And everything about the series screams authentic all-caps CHICAGO, even down to the show’s sound, which included the homegrown genre of stepping music, as well as Chicago artists such as Chance the Rapper, Kanye West, Chicago Children’s Choir, Sir Michael Rocks, and Noname. On The Chi, there is life, laughter and even hope.

For the Chicago-born Sylvia Jones, one of the scribes behind The Chi, working on the series has been a revelation. “This is Lena’s baby … her vision,” said the former local news producer at WGN and WLS. She quit her job in 2016 and flew out to Los Angeles to chase her dream of becoming a television writer. “Very often, shows about Chicago show people either tragically poor or affluent. But there’s not a whole lot in between on television, and that’s what most of us are in real life. … The Chi tries to show black people in all their complexities.”

Indeed, Jason Mitchell (Mudbound, Straight Outta Compton) plays Brandon, a gifted, hungry chef with dreams of opening up his own restaurant with his ambitious girlfriend, Jerrika (Tiffany Boone). There’s the aforementioned Coogie, Brandon’s half brother: a wild-haired, unabashedly quirky kid who rides past murals of Chicago’s adopted son President Barack Obama on a canary yellow bike while listening to Chance the Rapper’s “All We Got.” And Mwine as the drifter Ronnie, a troubled yet loving stepfather who also happens to be a police informant. Alex R. Hibbert (Moonlight) dives into the show-stealing role of Kevin, a charismatic tween who has a crush on a cute schoolmate. And Jacob Latimore is Emmett, an obsessive sneakerhead and girl-crazy playboy living with his mother. The all-too carefree young man is finally forced to face the sobering responsibilities of fatherhood.

It’s a stellar cast, rounded out by Chicago native and Oscar-winning rapper/actor Common and the criminally underrated Sonja Sohn (The Wire) as Brandon’s protective alcoholic mother. The Chi is a welcome nuanced television portrayal of Chicago’s black working class shown through a complex lens that sidesteps the usual one-dimensional stereotypes. And The Chi is not alone. 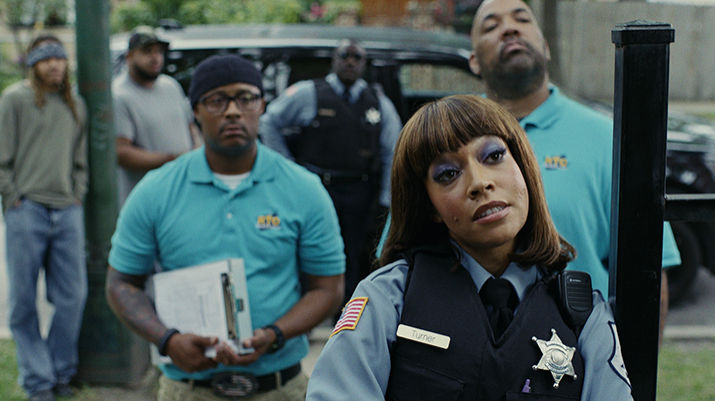 This fall, Comedy Central will debut the workplace comedy South Side. It’s set in and around a rent-to-own appliances and furniture business in Chicago’s notorious section of Englewood. It’s a risk-taking premise for sure: finding comedy in the heart of an infamous neighborhood that in past years has claimed Chicago’s highest murder rates. But according to Bashir Salahuddin, who came up with the idea for the series with his brother Sultan Salahuddin and former fellow Late Night With Jimmy Fallon writer Diallo Riddle, humanizing the community of Englewood is priority.

Many of the actors and workers on the set of South Side are actually from Chicago. And Salahuddin says he hopes to show another side of low-income communities like Englewood, which is experiencing a noticeable upswing. From January to October 2017 there were 130 fewer shootings, a 43 percent decrease. And, even as conversations about gentrification swirl, openings of both Starbucks and Whole Foods have injected a sense of economic optimism.

“A huge chunk of our show is actually shot in Englewood,” said Salahuddin, 41, from his Los Angeles home. Like The Chi’s Waithe, he was born and raised on the South Side. Salahuddin, who also stars as referee Keith Bang in the breakout Netflix wrestling comedy GLOW, recalls hearing hilarious stories from his boy who worked at a Rent-A-Center in Chicago. That’s when the idea hit. Salahuddin knew there was comedic gold in the lives of everyday, hardworking, blue-collar black folk.

“I remember being shocked the first time I saw Friday because all I knew about the West Coast was Boyz n the Hood and Menace II Society,” he said. “So to see the same ’hood backdrop where those two movies took place in, but with a strong black family where the mother and father are together and working and they are staying on their son to better his life, those values portrayed in that environment … blew my mind. We want people to experience the same thing with South Side and say, ‘Oh, there are other kinds of things going on in Englewood, and some of it is really funny and thoughtful.’ ”

For Atlanta native Riddle, also 41, immersing himself in the idiosyncrasies of Chicago culture as well as the city’s notoriously segregated history was an eye-opening experience bigger than West Side vs. South Side, Harold’s Chicken Shack vs. Uncle Remus or Chicago Cubs vs. White Sox.

“When I meet a white person from Chicago, I’ll often say, ‘Man, this person can be from anywhere,’ ” Riddle said. “But a black person from Chicago feels a lot more specific. It’s a weird mix of Midwest and heavy South. Even when I would talk to Bashir’s family or listen to Chicago artists like Kanye [West], there are little things that were tapped into their way of speech and culture that you don’t see anywhere else. For us, this was unclaimed territory. We knew we needed to do a definitive show that jumped into that specific culture.”

“Often, shows about Chicago show people either tragically poor or affluent. But there’s not a whole lot of in-between on television. And that’s what most of us are in real life.”

The emergence of The Chi and South Side come at a time of exceptional growth for the Chicago entertainment industry. According to the Illinois Film Office, which awards a 30 percent tax credit to film, television and advertising productions, in 2016 alone projects generated an estimated $499 million in Illinois spending, a 51 percent increase over the previous year. From 2011 to 2015, $1.3 billion was injected into the cities’ economy, bringing in local jobs and a much-needed kick to hard-hit neighborhoods.

One of the eight major television series filmed full time in Chicago is Empire. “Chicago has such a great pool when it comes to local actors,” said Joshua Allen, a supervising producer on the Fox ratings-fixture and himself a Chicagoan. “People have slept on Chicago forever as a theater town, because when people think theater, they usually think of New York. But it has a huge, vibrant theater scene, so we have a lot of actors we can pull from.”

Both South Side and The Chi offer fresh, challenging takes on the home of the blues. Perhaps that’s why The Chi in particular resonates so profoundly, and South Side, even before its premiere, seems full of possibility. Lena Waithe, and the trio of Diallo Riddle and Bashir and Sultan Salahuddin, are creating work that tells their truth: the good, the bad and the absurd. There’s a newfound black power and freedom that jumps off the screen — as on such other uncompromising shows as Donald Glover’s surreal Atlanta (FX), which returns in March, and Issa Rae’s fearless Insecure.

“There are millions of TV shows, so we have to stand out,” Salahuddin said. “Why do all this stuff and then not show people something authentic?” Indeed.