The WBO welterweight champion is paying it forward in his hometown

NEW YORK — After completing his training in Colorado Springs, Colorado, leading up to Saturday’s defense of his WBO welterweight boxing title at Madison Square Garden, Terence Crawford could have easily jetted straight to New York for the final days of fight prep.

Crawford, instead, flew home to Omaha, Nebraska, where a send-off rally was held at the boxing gym he opened six years ago.

For the people, it was a chance to reach out and touch the best boxer that Nebraska has ever produced. For the 31-year-old Crawford, it was a chance to soak in the love of family, friends and his ride-or-die supporters — the people who always put him in the proper mindset going into a big fight.

“I have a lot of love for Omaha, and the people of Omaha love me back,” Crawford told The Undefeated just before stepping onstage Thursday alongside Saturday’s opponent, Amir Khan. “The turnout by the people was great, and it’s amazing the amount of support that they’ve always showed me.”

What Crawford (34-0) said about Omaha is true: It’s easy to love home when home loves you back.

But home hasn’t always been that hospitable to Crawford, who’s known as “Bud” to the people in Omaha.

In his house, his mother showed him tough love during a tough childhood. On the streets, a bullet fired through his windshield back in 2008 ended up passing through his head and miraculously missing his skull. In the legal system, Crawford was once sentenced to 90 days and probation after being convicted in 2016 of two misdemeanors over a dispute with the owner of a car repair shop.

“Omaha’s got everything you find in any big city: drugs, gangs, crimes and killers,” Crawford said. “I’ve been through my trials and tribulations. But it’s never too late to make the right choices and decide which side of the fence, the right side or the wrong side, you want to be on.”

Last week’s trip home was to visit a place Crawford launched to help direct kids to the right side of the fence: the B&B Sports Academy in North Omaha (B&B refers to Bud and Brian “BoMac” McIntyre, Crawford’s trainer). Fans braved near-freezing temperatures for an opportunity to take pictures with Crawford and get his autograph.

B&B, which was an old garage before being renovated in 2013, has multiple missions: to identify and train talented fighters, much like the way McIntyre discovered Crawford as a youngster, and to provide a refuge for at-risk and underserved youths living in the same tough streets that Crawford had to navigate growing up.

“We’re helping kids stay focused and get good grades, and we even have some of the boxers actually winning big tournaments,” Crawford said. “So that puts a smile on my face, knowing that we’re changing the lives of some of these kids.”

The community outreach for Crawford extends beyond the gym. Since winning his first championship in 2013 (as a lightweight), Crawford has held six title defenses in Nebraska, including five in Omaha, making his hometown a spectacle for international television audiences.

“I want to have them at home because a lot of the people there can’t buy a plane ticket or afford a hotel room to go to New York or Las Vegas to see me,” Crawford said. “Before, they had to watch it on TV. Now it’s good to look out into the crowd and to see my people wearing their new outfits and cheering for me. That motivates me and, at the same time, I get to see the joy in their faces.”

There won’t be that hometown feel on Saturday as Crawford faces Khan (33-4) at Madison Square Garden in New York. While Khan’s best days are behind him, the 32-year-old Brit has enjoyed a well-respected career. He was a 2004 Olympic silver medalist and the WBA light welterweight champion from 2009-12 and has won two fights since being knocked out by Canelo Alvarez in a 2016 middleweight championship fight. He has never lost a fight as a welterweight. (Of his four losses, one was as a middleweight, two as a light welterweight and one as a lightweight.) 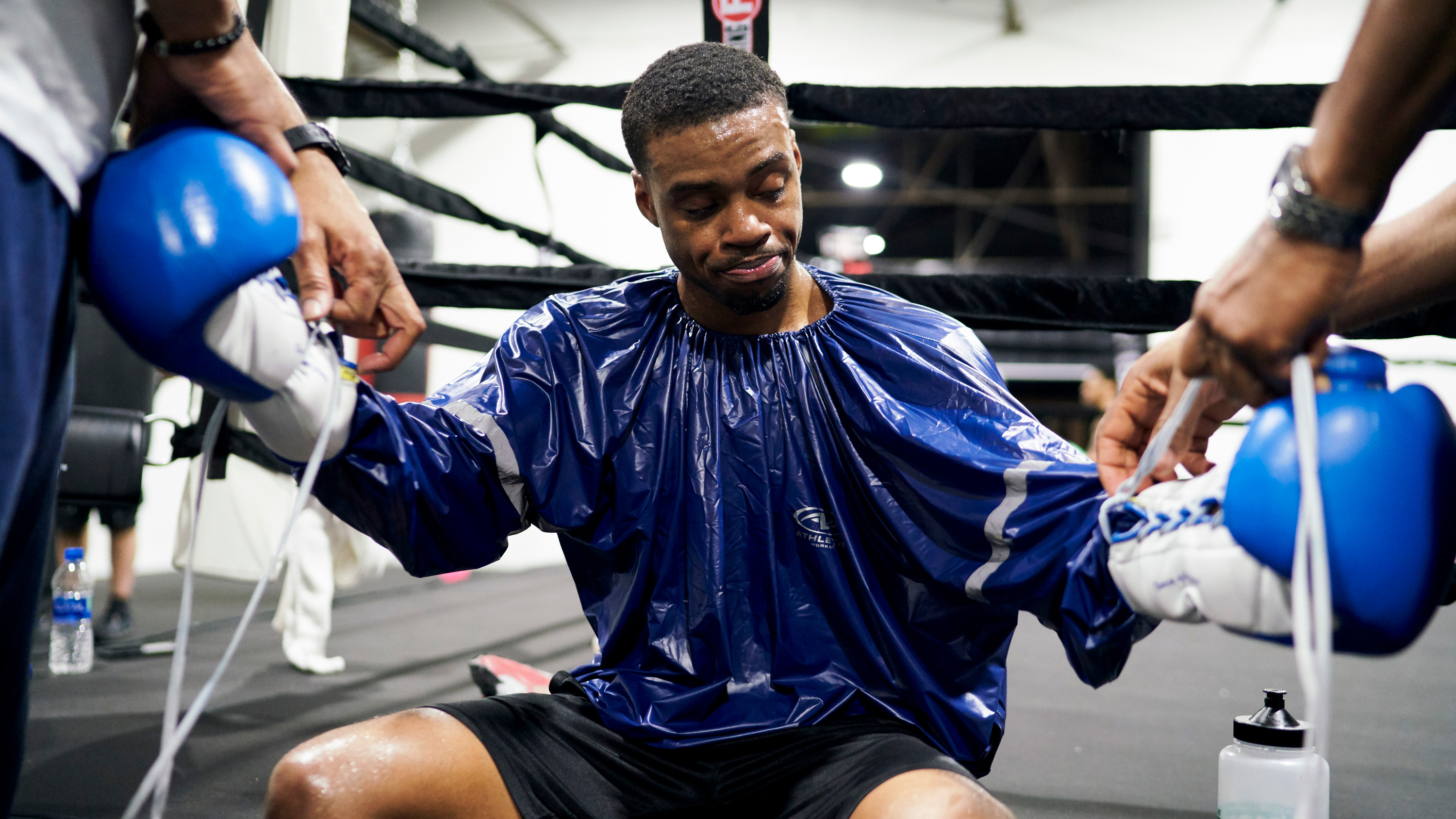 “This ranks as one of the top title fights for me because Terence is high in the pound-for-pound rankings, maybe No. 1, so it’s amazing for me to be in this position again,” Khan said Thursday. “I know I can’t make any mistakes in this fight, because I can get in trouble.”

For Crawford, this is his second defense of the WBO welterweight title that he won by knocking out Jeff Horn last June. His seven previous fights before that win were as a light welterweight. Khan will be the biggest “name” opponent he’s faced.

“Amir Khan’s name came up because he was the next best welterweight in the division,” Crawford said. “He’s done a lot in the sport of boxing, and he’s undefeated in the welterweight division. So why not take another step up?”

The next step up for Crawford after this bout would be a unification fight with IBF welterweight champion Errol Spence Jr. After watching the two jaw with each other outside the ring last November, boxing fans are ready for them to square off in a title fight.

👀‼️ Errol Spence and Terence Crawford met face-to-face and confronted one another at Hooker v Saucedo last night. We need to see this fight.

For Crawford, he’s hoping one of those opportunities brings another title fight to Omaha.

“It would be great to get another fight back home,” he said. “It’s always special when I fight there. I’ll do anything to give back to my city and the community that helped me become the man I am today.”