Started from the bottom, now he’s a Raptor: The rise of rookie Terence Davis

TORONTO – It seemed quite possible following the 2019 NBA draft that Terence Davis Jr. would be enjoying Thanksgiving with his family in Southaven, Mississippi, without an NBA contract. Instead, the undrafted rookie guard will be enjoying turkey, cranberry sauce and dressing with his Toronto Raptors teammates in Orlando, Florida, on Thursday.

“I’m honestly just thankful for what God has done in my life this past year and my whole life,” Davis told The Undefeated. “Blessings after blessings. I give God all the glory for my play. I keep faith in him and remain humble and confident.

“There are people like me out there in terms of talent and things of that sort, but still don’t believe in themselves. All it takes is for you to believe in what you want to achieve. Speak it into existence.”

The 2019 draft class boasts Zion Williamson, Ja Morant, RJ Barrett, Rui Hachimura, among others. But Davis, who the Raptors signed to a two-year deal paying $898,310 this season with a team option for the 2020-21 season, has been one of the biggest rookie stories.

Davis has gone from an uncertain future in the NBA to being part of the rotation for the reigning champs, playing 14.1 minutes per game off the bench. The 6-foot-4 Davis put up a career-high 19 points against Orlando on Nov. 20 and has scored in double-digits in four of his past six games.

“I’m not sure I expected him to do all that,” Raptors head coach Nick Nurse recently told reporters. “I’ve talked about [how] he can vault up and shoot the ball, I know that. He’s very athletic, I know that, too. I think he’s catching teams off guard a little bit. He’ll probably start hitting the scouting reports a little harder.

“But he’s been great the last couple of games. Hopefully we can keep getting him a bunch of minutes so he can gain some experience and keep on going.”

As a senior at Ole Miss last season, Davis was a 2019 all-Southeastern Conference second-team selection, but he was not high on the NBA’s radar. He wasn’t even invited to the 2019 NBA pre-draft camp in Chicago at first.

In April, Davis attended the Portsmouth Invitational Tournament in Portsmouth, Virginia. While all 30 NBA teams still scout the event, which invites the best college seniors, the tournament does not have the cachet it used to since the best college prospects now typically stay only one or two seasons. Even so, Davis caught the eye of NBA scouts and received an invite to the 2019 G League Elite Camp as a prospect for the minor league.

“I felt like it was God opening doors for me,” Davis said. “I was just a fill-in. Someone got hurt and they put me in there. My agent called me and told me I got the invite. So, I just packed my bags and got there the day before.”

Davis’ last name was not even on the back of his G League Elite Camp jersey since he was added so late. But with NBA and G League scouts watching, the motivated guard received notice by scoring a game-high 24 points in 22 minutes during his second scrimmage. That play rewarded Davis with one of five promotions from the G League Elite Camp to the NBA pre-draft camp.

“They didn’t have my name on my jersey, so that just added more fire,” Davis said. “I put the work in, so that is why I had faith.”

Davis continued playing well at the NBA pre-draft camp, averaging 15 points on 57.1 shooting from the field during two five-on-five scrimmages. His hands also received attention, measuring at 10.75 inches wide, the biggest measurement by a guard since 2010.

Suddenly Davis went from an unknown to a potential draft prospect who worked out for Atlanta, Minnesota, Phoenix, Philadelphia, Utah, Sacramento, Chicago, Brooklyn, Dallas and Golden State (twice), according to his agent, Adam Pensack.

“I left Chicago feeling pretty good,” Davis said. “I went up against a lot of talent. I was definitely looking forward to hearing my name called at the draft.”

Davis didn’t attend the 2019 NBA draft in Brooklyn, New York, but his family and friends hosted a draft party for him in Southaven. The party was in a hotel conference room with lots of food and drinks, and Davis was hopeful he’d be selected in the second round surrounded by about 40 family members and friends.

“I had my two phones. I was looking to one of the phones ringing,” Davis said. “We were there having a good time. But I was extremely nervous.”

Davis’ partygoers got excited when a similar name was displayed on the big screen television with the 48th pick. But it was guard Terance Mann of Florida State, selected by the LA Clippers, not their beloved Terence.

Toward the end of the draft, with reality sinking in, an emotional Davis addressed his family and friends with an impromptu speech.

“I’m trembling. I’m not crying. But you can hear the shakiness in my voice,” Davis said. “That was the night I became a man. I said, ‘Hey family, this is a deal. A few teams offered me two-ways [contracts]. I turned them down. I think I am better than a two-way. All those guys that got drafted tonight, they are going to have to lace their shoes up just like I am in summer league. God is not done with my story. It’s not the end. It’s the beginning.’

“My dad came and hugged me. My grandmother hugged me. It still touches me right now. But that is what I mean when I say I became a man. I really took it all in.”

After the draft, Davis retweeted an old video of Raptors guard Fred VanVleet, who addressed his own family and friends in positive fashion after he went undrafted in 2015. Little did Davis know that in a few weeks, he and VanVleet would become teammates.

Denver Nuggets president Tim Connelly called Davis after the draft and offered him the opportunity to play for their summer league team. Davis accepted the offer while turning down similar invitations from Toronto, Golden State, Utah and Memphis. During his summer league debut with the Nuggets on July 7, Davis scored 22 points on 8-of-13 shooting from the field. He nailed 5-of-7 3-pointers, grabbed five rebounds and played well defensively, too. Later that night, he was stunned to get a call from Pensack, who said the Raptors were offering a guaranteed contract.

“I swear I said to my agent, ‘Is this a joke? This happened fast. This can’t be real,’ ” Davis said. “He said, ‘This is real. This is serious.’ I said, ‘I got to call my mom and my dad.’ I wanted to thank God. I was the only [undrafted free agent] who signed a contract from the whole summer league. A real deal. …

“I still didn’t believe it after I signed. But I saw a story in the paper and said, ‘This is definitely real.’ For it to be fully guaranteed in the first year, I just had to continue to thank God. It was an unbelievable feeling. A joyful feeling.”

Davis joined his new Raptors teammates in August for pre-training camp workouts in Los Angeles, where VanVleet got to know him.

“Fred took me out to dinner and he wanted to know my story,” Davis said. “I was with him and his boys just talking. He got to know my story and how it was similar to his. I told him that I saw his [old] tweet the night of my draft and that was just heartwarming. He had to stand up in front of his family telling them it was a long process. I had to retweet it not knowing I would be his teammate.”

Said VanVleet: “He asks a lot of questions, which is good for a young guy. He has a good amount of confidence. He is humble. He understands what his journey is going to be like. I just want to help him speed up his learning curve.”

Raptors All-Star guard Kyle Lowry has also taken a liking to Davis. When Davis was a child he used to enjoy watching Memphis Grizzlies games with a then-young point guard named Kyle Lowry and center Marc Gasol (also with Toronto now). The rookie has made a habit of sitting next to Lowry on the team plane to obtain as much wisdom as possible from someone he says is “like a big brother to me.”

“Terence is from Southaven, Mississippi, and he was 9 or 10 years old when I got drafted,” Lowry said. “It’s pretty cool to have a kid like that and know his background. I know Mississippi. He’s going to be really good.”

Nurse, meanwhile, said he had no preconceived notions about Davis since the franchise has a history of finding diamonds in the rough: VanVleet went undrafted; Pascal Siakam, the 2019 NBA Most Improved Player, was the 27th overall pick in the first round of the 2016 draft; and Norman Powell was the 46th overall pick of the 2015 draft. 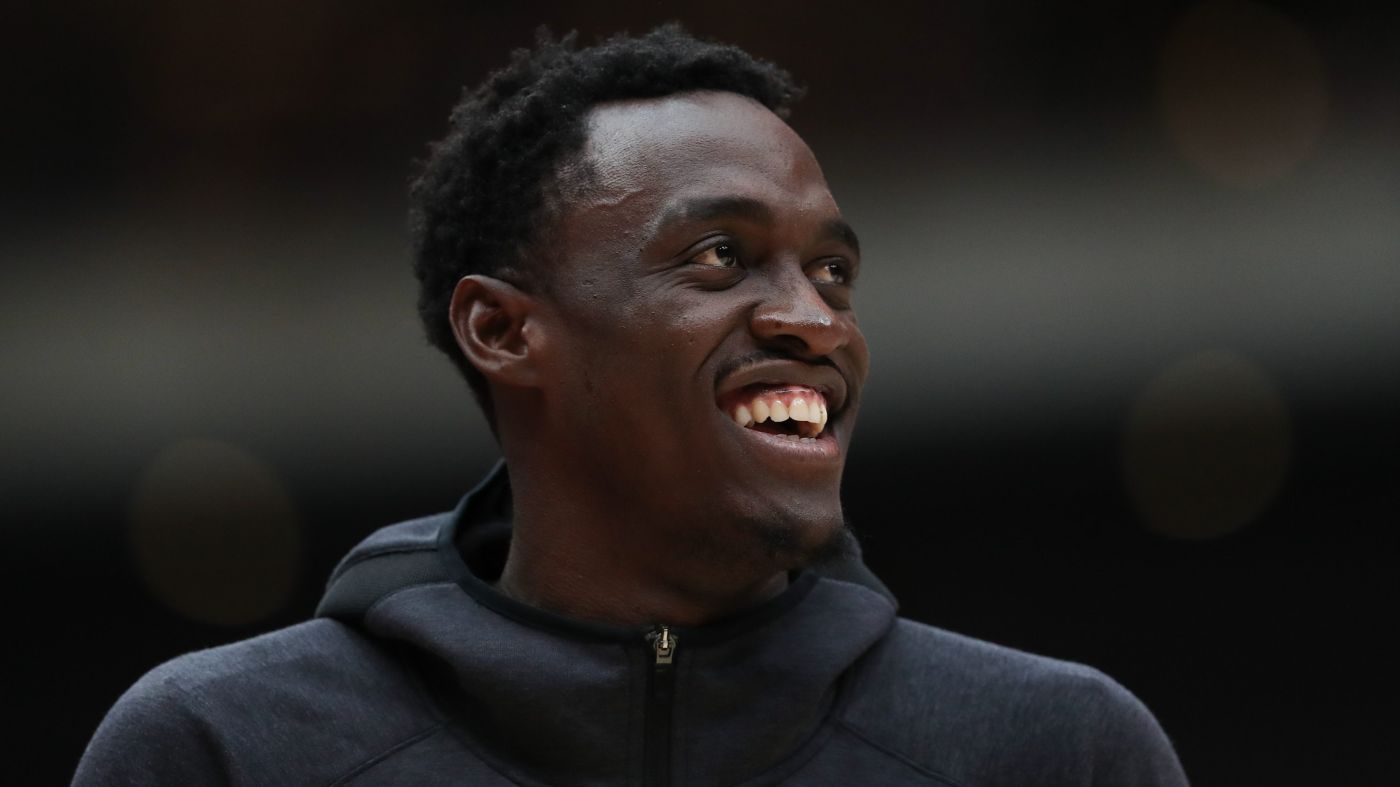 “[Davis] has all the talent in the world. He can play,” Nurse said. “He is explosive, he’s strong and he competes. We have a history of taking these kinds of guys, Freddie, Pascal [Siakam], Norm. … Our scouts have done have a great job of getting us those guys.”

Davis made his NBA debut on opening night on Oct. 22, earning five points, five rebounds and two assists in 15 minutes in a 130-122 victory over the New Orleans Pelicans. His proud father was in attendance wearing Davis’ No. 0 Toronto jersey, along with his wife and their pastor.

“It wasn’t shock because I always knew this day was going to come,” Davis Sr. said. “But, just seeing your son fulfill his dream out there on the court almost brought tears to my eyes. I was just grateful.”

Davis has averaged 6.3 points, 2.8 rebounds and 1.9 assists for the Raptors. And over the past eight games with Lowry out, he has averaged 10.9 points, 3.9 rebounds and three assists. He entered Monday ranked second among NBA rookies in 3-point percentage (.485) and plus-minus rating (+65).

If Davis keeps it going, perhaps he’ll get consideration for the Rising Stars Challenge during the 2020 NBA All-Star Weekend. At the very least, he can inspire others with his story.

“It just feels like I belong here,” said Davis, who writes “#MakeEmBelieve0” on social media for the remaining non-believers. “I want to be part of something special. … I am definitely in the right situation here in Toronto.”