Ernest Shaw is the senior artist in residence at the Motor House, an arts space in Baltimore funded in part by the Robert W. Deutsch Foundation. He is an artist and educator in the Baltimore City Public Schools and is a native Baltimorean. His new exhibition, Testify!, explores themes of black masculinity, violence against women and young black men.

Below is the artist’s statement from the Testify! exhibition.

“Art has to be a kind of confession.” — James Baldwin

“Testify” is my confession. I am testifying to fifty years of study that has given birth to a culmination of work that illustrates aspects of the Black experience from a historical, social and cultural perspective. By “Black” I am not referring to the popular notion of Blackness as the antithesis to Whiteness, which was established in the mid-late seventeenth century U.S. I am referencing a Black/Blackness that’s existed for thousands of years emanating from the continent of Africa and throughout the Diaspora.

Blackness exists and is illustrated through cultural strains that can be witnessed everywhere Black folk/Africans reside. I’m referring to notions of Blackness as observed by the works of artists such as James Baldwin, John Coltrane, Charles White, Nina Simone, John Biggers, Elizabeth Catlett, Sun Ra and Romare Bearden, all whose work has had an impact on my process. Blackness is the roux in the gumbo and the syncopation and improvisation of America’s classical music, also known as Jazz. Blackness is the wail of a mother after losing her child and a parishioner’s shout once struck during church. It’s Dogon astrology and Nile Valley cosmology. Blackness predates the Birth of the Cool, Sundiata’s Epic and The Infinite Wisdom of Ptah Hotep. It exists in all things but cannot be encompassed by any one thing.

This exhibition is a coalition of work created for three major projects: The Blackness, Manhood and Masculinity Initiative, Sorry I Didn’t Know and Too Cool for School. A number of the pieces were created during my sabbatical from Baltimore City Public Schools. These works combined serve as my testimony to Black portraiture and Black figurative artists current and past.

The Blackness, Manhood and Masculinity Initiative is a project originally created by slam poet and writer Kenneth Morrison and me. Two-dimensional portraits and poems were inspired by interviews of approximately one hundred Black men and boys ranging in age from fourteen to seventy-five. The interviews covered topics such as death, religion, sexuality, politics, rites of passage, creativity and relationships. Part of our mission was, and is, to re-humanize the Black male image. The work created was not only inspired by the data collected from the interviews, but the experience of collecting the data itself. It was, and is, an enlightening experience to connect with so many young and older brothers. Thank you to everyone that participated thus far. The project is ongoing and is funded by The Rubys Grant sponsored by the Robert W. Deutsch Foundation. 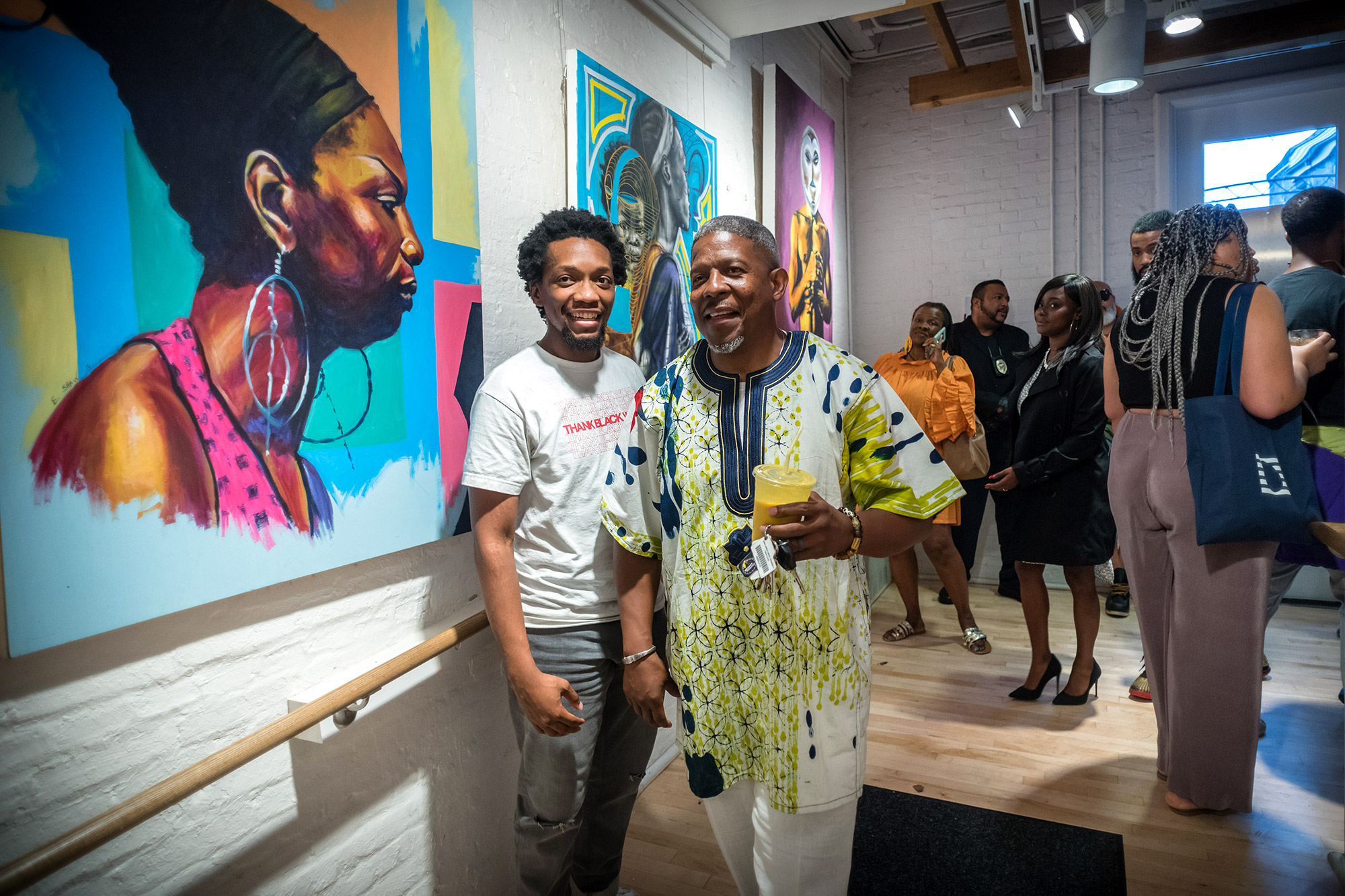 At the opening for his show, Testify!, Ernest Shaw (right) laughs with fellow artist Charles Mason III (left) as he greets guests who came out to support him. 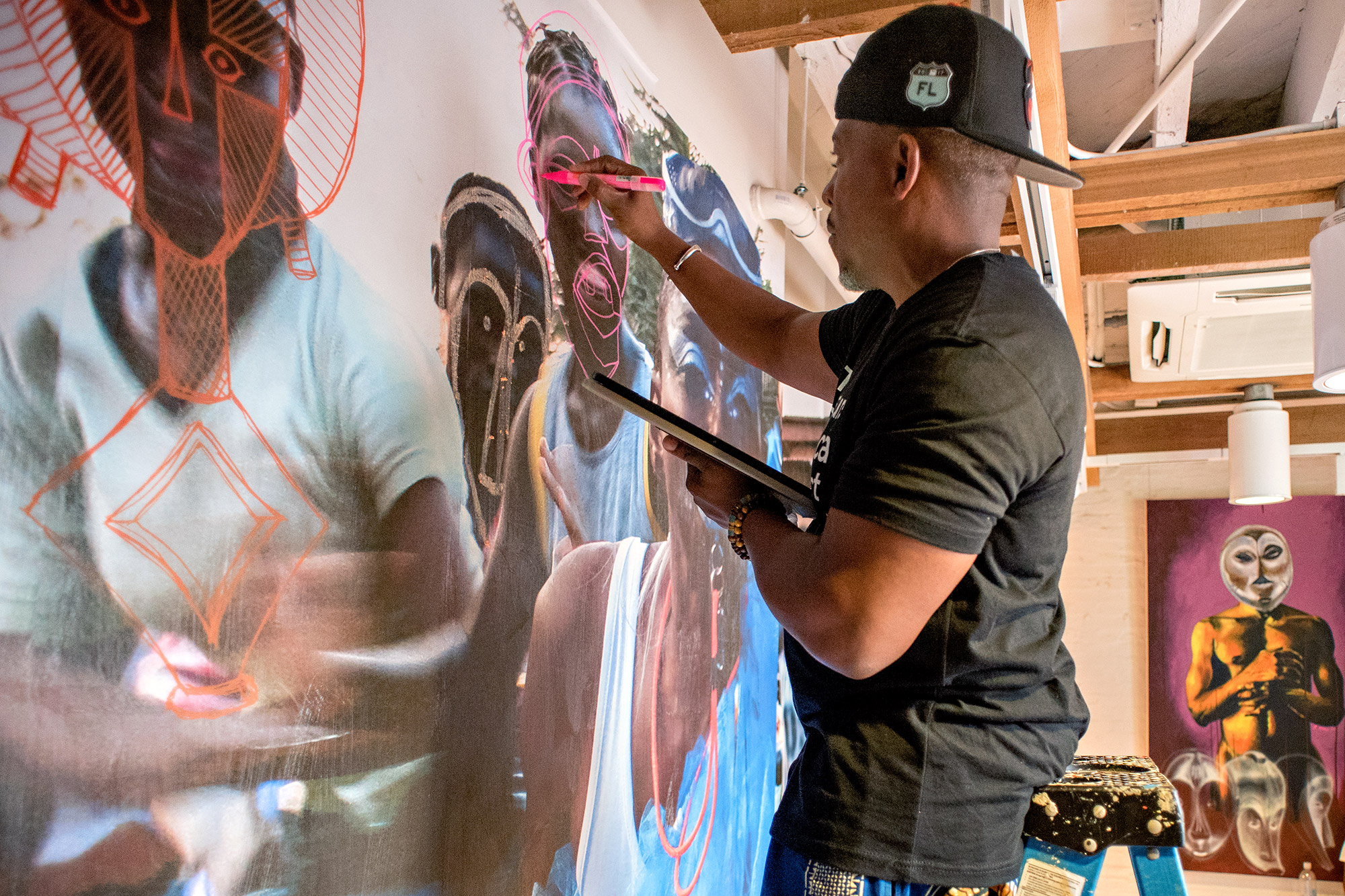 Ernest Shaw puts the final flourishes on a photo mural that he installed with the help of another artist on a wall at the Motor House ahead of his exhibition.

Well into adulthood I was suddenly made aware of the historic and systemic assault on Black women and Black womanhood. I am ashamed that through the majority of adulthood that I was oblivious to the epidemic of sexual assault, abuse and molestation experienced by so many Black women and girls by known perpetrators. It was then revealed that many victims were/are coaxed to remain silent and immediately return to a facade of normalcy. The Sorry I Didn’t Know body of images is dedicated to the layers of trauma experienced by many Black women and girls. In the series I often use traditional African masks to accompany the figure. My use of the masks is dedicated to the historic abuse of the Black woman’s body physically and psychologically. The masks represent the request of Black/African women to hide their trauma and/or attempt to become something they could never be without the use of outside assistance. The aesthetic assault on Black women’s consciousness is arguably as devastating to their self-esteem/self-worth as any physical assault.

Too Cool for School is a series of works informed by my practice as an educator of mostly Black children in Baltimore City. It focuses on the intellectual assault on Black boys who are the lowest performing demographic of students nationwide. I wish to project images of Black boys in an authentic and human light, a light that allows them to maintain the dignity and freedom allotted to boys of other racial groups. My work with Black boys also inspires me to draft images of Black boys who historically never were allowed to reach manhood, if in fact it is at all possible for a Black boy to reach/attain manhood in the context of this society.

There are ties that bind the entirety of imagery of this exhibition. My concern for authentic depictions of the Black body and imagery are at the forefront of any project, mural or lesson with which I am affiliated.

This exhibition is made possible by the financial support of the Robert W. Deutsch Foundation.