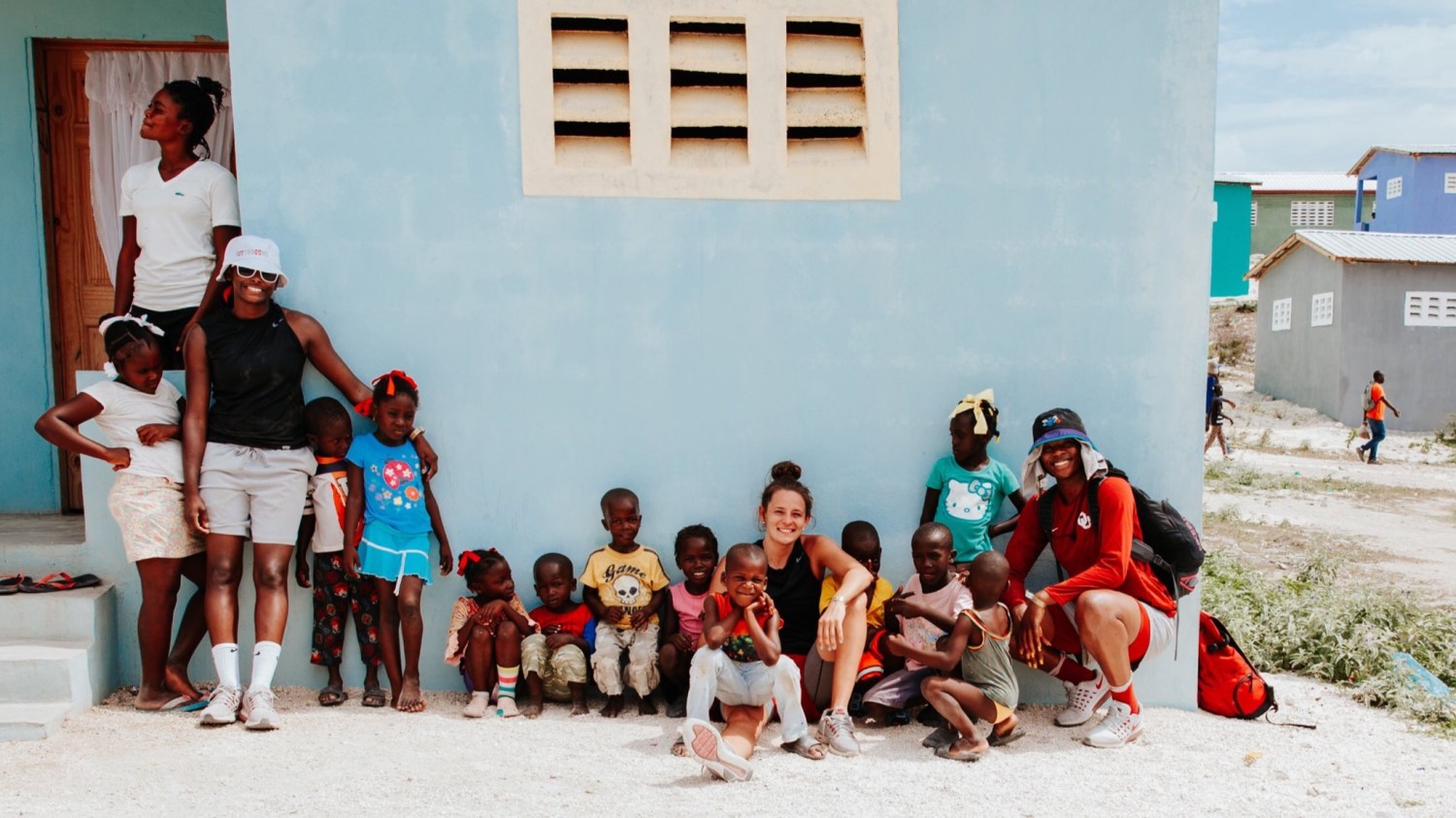 A couple of days into a weeklong service mission in Haiti, Mikado Hinson, the Texas A&M University football director of player development, was clearly excited to be in the company of his student-athletes and the people of Haiti.

“It has exceeded my expectations,” Hinson said of the College Station, Texas, school’s second trip to the poorest country in the Western Hemisphere.

“It’s been great to see our student-athletes have life-transforming experiences. I have not been disappointed in anyone in our group,” said the licensed and ordained minister.

On this day, 67 Aggies, representing 10 percent of the university’s student-athlete population and nine sports, planted trees, painted multiple houses and engaged locals during open discussion forums in challenging weather conditions. Hinson passionately expressed his optimism for Haitian people and his belief in the alternative learning experience. It’s no coincidence that the athletes are in Haiti during Haitian Heritage Month in the U.S.

Thank you Texas A&M for an opportunity of a life time and til next Haiti! Mwen renmen ou! (I love you) #HaitiLove pic.twitter.com/bsWDn65VGI

“You see people with smiles and hope all the time,” said Hinson, a Johnson Community College and Norfolk State University graduate. “Mission of Hope Haiti is a humble organization in that they employ Haitians to serve other Haitians in need through programs such as the Hope House for the elderly.”

After working with coach Kevin Sumlin at the University of Houston, Hinson joined one of the nation’s and Southeastern Conference’s top football programs in 2014. A year later, Hinson was contacted by Jay Richardson, an Aggie and Mission of Hope Haiti staffer.

“I was interested when Jay approached us, but we were busy with the season and I asked him if we could connect when things slowed up,” said Hinson, a Kansas native, husband and father of three.

“We figured out the process and how it would work out,” Hinson said of the first trip last year. “When I informed the department that we were going on the mission, other coaches and staff members became interested. After we got back last year, all the athletes were telling other athletes. The influence of some of those guys is great from the football locker room, and for that reason more football players are coming this year.”

Knight, who began his career at the University of Oklahoma and transferred to Texas A&M as a graduate student, took his first mission trip as a freshman with the Sooners.

“You get to serve,” Knight said last year during a news conference announcing the mission. “You get to get out of all this lavish life [where] everything is kind of given to you here. You get to go and get your hands dirty and be in the hot sun. You break down the walls. You don’t have your phone for a week. So you’re just out there serving, and it turns into a whole lot of fun.”

Hinson echoed Knight’s sentiments. “We are going to serve people and, although we cannot change the world in one week, we can all be changed in one week. We are going to piggyback on what Mission of Hope is doing, and we have the manpower and heart to serve.”

For close to 16 years, Hinson served as chaplain and campus director for Fellowship of Christian Athletes (FCA) while acting as team chaplain and character development coach for the University of Houston’s football program. The spiritually charismatic leader and educator also served as the Houston Rockets’ team chaplain from 2000 to 2008 and on the FCA National Chaplain’s Task Force from 2010 to 2013.

“The goal is to get us out of our comfort zone,” Hinson said, adding that partnering with the Cedar Park, Texas-based Mission of Hope Haiti “has been a great partnership for us in that regard.”

Officially founded in 1998, Mission of Hope Haiti (MOH Haiti) has since grown from a small mission into a fruitful organization that now runs an orphanage, medical facility, school and church. Through partnerships with higher education institutions such as Texas A&M, University of Oklahoma, University of Texas and Texas Tech, MOH Haiti also serves outside of its property on the island by helping other orphanages, churches and schools throughout the country.

Existing to bring life transformation to every man, woman and child in Haiti, MOH Haiti currently feeds more than 91,000 children daily, affects more than 9,000 students through education, trains more than 1,700 farmers and provides medical care to more than 30,000 patients.

“This trip is infectious among the athletes and paying dividends on and off the field,” said Richardson, MOH Haiti’s director of mobilization. “Students are connected to something transcendent and therefore excited to put themselves in a position to change the world.”

“We love to see student-athletes pour their hearts into serving others here in Haiti,” said Brad Johnson, MOH Haiti’s president. “It’s an opportunity for them to impact a lot of lives. It helps them grow individually and as a team.”

Taking a week out of their three-week summer vacation, many Texas A&M student-athletes participate in local community service projects and are not “confined to only domestic issues,” according to Hinson. “We should be moved to go elsewhere. Haiti presented a really good opportunity for us.”

Aggie nation has shown tremendous support for Aggies For Haiti since Richardson and Hinson initially connected. Good Bull BBQ founder and A&M alum Thomas Sitton joined the group last week, donating proceeds of his company’s May sales to MOH Haiti. Appreciative of all the Aggie supporters, aiming to make them proud, Hinson said he and his team are not motivated “for the news coverage.”