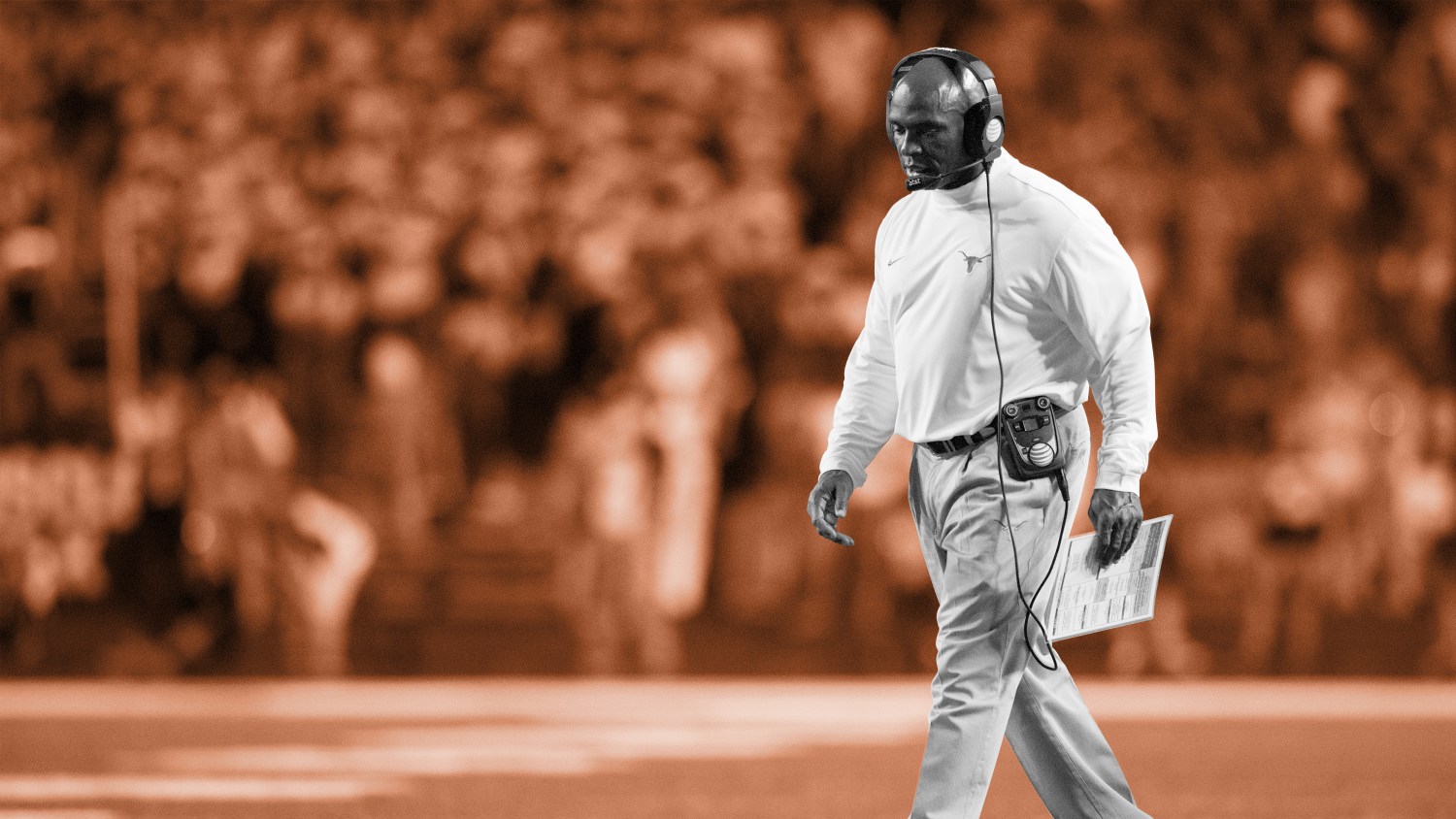 After climbing to the top of college football, the University of Texas coach lost his grip

Long before Kansas kicked off to Texas on Saturday, Charlie Strong was already backed up against his own goal line.

Calls for the Texas head football coach to be fired percolated when his defense gave up 99 points in two early-season losses to Cal and Oklahoma State, with the Cowboys blocking a stupefying three extra points. Criticism increased the following week in a loss to Oklahoma, and echoed even louder one week later after an error-filled debacle at Kansas State.

But Strong had been in tough spots before.

He grew up in small-town poverty in Arkansas, with five siblings and a father living all the way across the state. He walked on at Central Arkansas, then willed himself to become a two-time all-conference defensive back. Traveling the arduous path of the African-American college football coach, Strong was passed over for top job after job despite his stellar resume.

In many ways, Strong was playing defense since arriving in 2014 at UT Austin, the premier public university in a state where football plays a role similar to oxygen. On the very day he finally reached the mountaintop and was introduced as the Texas coach, Strong’s ability was publicly questioned by the school’s biggest booster.

Strong got a pass for finishing 6-7 his first season, with his first-string quarterback never suiting up due to concussions. But folks got restless during a 5-7 campaign in 2015. As his third season slid toward disaster, his record teetering at 5-5, Strong dug in for a goal-line stand.

“A place to stand, it’s all you need. You just need a place,” Strong told The Undefeated before the Kansas game. “Fourth and 1, on the 1-inch line, you got a place to stand. So let’s go stop them.”

The 1-9 Jayhawks were 23-point underdogs. They had lost 23 straight games to teams from the top-level Football Bowl Subdivision. They had not beaten Texas since 1938. But Texas fumbled three times, threw three interceptions, shanked a 31-yard field goal and lost in overtime, 24-21.

On Sunday night, Texas decided to fire its 56-year-old coach.

As he was pushed back toward his end zone, yard by yard, Strong struggled under the weight of black history and burnt-orange expectations.

Then he finally ran out of ground.

African-Americans have coached championship teams in pro football, basketball and baseball. They have won it all in college basketball. But never in college football.

With Strong’s reported firing, only 12 of the 128 FBS coaches are black, according to the Institute for Diversity and Ethics in Sport. One coach is Latino; two are Asian-American or Pacific Islander; 112 are white. The college player population is 54 percent black; 41 percent white; 3 percent Asian-American/Pacific Islander; and 2 percent Latino.

“As a minority coach, there’s just so much more you have to overcome,” said Tony Dungy, the first black coach to win a Super Bowl, with the Indianapolis Colts in 2007.

Strong had the highest-profile job for a black coach since Tyrone Willingham led Notre Dame from 2002-2004. The current black head coaches include Texas A&M’s Kevin Sumlin, whose 2012 team featuring Johnny Manziel beat top-ranked Alabama in Tuscaloosa and Oklahoma in the Cotton Bowl, then finished tied for fifth in the AP poll. At Stanford, David Shaw has taken the Cardinal to three Rose Bowls and the Fiesta. James Franklin’s Penn State squad knocked off Ohio State this season and could make the College Football Playoff.

Unlike in the NFL, coaches in the upper echelons of college football are the face of not only the team, but often the entire university. And while NFL owners can unilaterally hire their coaches, Dungy said, in college that decision is affected by a network spanning from the university president, athletic director and boosters down to alumni, media and fans.

That network made Strong’s journey longer than most.

He was passed over for head coach positions despite sterling qualifications as a world-class recruiter, defensive coordinator under Lou Holtz at South Carolina, and winning two national championships as defensive coordinator under Urban Meyer at Florida. Asked about getting turned down by one SEC doormat, Strong said in 2009, “Everybody always tells me I didn’t get that job because my wife is white.”

“Why doesn’t he get a chance to be head coach at Florida?” asked Dungy. “Then you have to ask, is the playing field really level. That’s when you have to do a little more to overcome the perceptions of a Red McCombs.”

McCombs is the billionaire Texas booster who called Strong’s hiring “a kick in the face” on the same day he was announced as coach. “I think he would make a great position coach. Maybe a coordinator,” McCombs said as the ink dried on Strong’s five-year, $25-million-plus contract.

Maybe a coordinator. Strong had just been head coach at Louisville, going 11-2 and 12-1 his last two seasons, with a Sugar Bowl win over Florida and a Citrus Bowl spanking of Miami.

McCombs’ no-confidence vote turned up the heat on a job that already carried enormous pressure to bring Texas its first title since 2005. The Longhorn legions consider winning a birthright. “We’re Texas” is their usual explanation for sky-high expectations fueled by $121 million in 2015 revenues, four national championships and a bottomless pool of in-state talent.

Strong also coached knowing that “you’re carrying a mantle of opportunity for all of those black coaches who came before you and will come after you,” said Floyd Keith, former head of the Black Coaches Association, who led teams at Howard and Rhode Island.

Explained Dungy: “You know that your success or failure makes it easier or more difficult for other [black coaches] to get jobs in the future. I felt it with the [Tampa Bay] Bucs and in Indianapolis. If we win, guys get interviews.”

Strong felt that pressure, too. “It pushes me forward,” he told The Undefeated.

Entering the Kansas game, in a season with more week-to-week twists than Empire, Strong was in position to save his job.

The roller coaster began with a double-overtime, 50-47 home win over Notre Dame, then ranked No. 10, which vaulted Texas to a No. 11 ranking. Then the three embarrassing losses labeled Strong a dead coach walking. But after Strong demoted his defensive coordinator and took over his play calls, Texas beat 6-0 Baylor on a last-second field goal, took down Texas Tech on the road, and played well in a close loss to 11th-ranked West Virginia. Salvation was within reach. Athletic director Mike Perrin said the team had made significant progress.

“But there’s a lot of football left to be played,” Perrin said.

What happened at Kansas?

Recruiting had suffered in the final years of previous coach Mack Brown. In Strong’s first season, he kicked 10 players off the team, including several starters and two players accused of sexual assault, as he established a culture of accountability and high character. That left Strong with one of the youngest teams in college football this season, featuring a starting lineup with 13 freshmen and sophomores, and only two seniors.

Against Kansas, true freshman quarterback Shane Buechele threw three interceptions, including a final pick in overtime that was behind and over the head of an open receiver.

“In his first year, he got rid of those guys, and they were real football players. They were very good, I won’t lie to you,” Earl Campbell, the legendary Texas running back and NFL Hall of Famer, said before the game. “The reason our program is down is because he chose to clean the program up.”

Texas and the run-and-gun offenses of the Big 12 conference may not have been the right destination for a defensive guru like Strong. But after years of rejection, he couldn’t pass up such a high-profile job to wait on the right SEC opportunity. Others wondered if all the snubs made Strong too loyal to subpar coordinators on his own staff. The Texas administration above Strong also was destabilized: The athletic director who hired Strong was fired for his alienating style; the university president who ushered Strong in was pushed out during an academic power struggle.

Strong was universally praised in Austin for his focus on character and academics. He did things such as personally review every player’s grades weekly, hold meaningful conversations even with equipment managers, and force his leading tackler to miss a crucial game this season to attend his grandfather’s funeral.

But he was often criticized for game decisions, even in victory. Strong’s haunting choice at Kansas was giving the ball to junior running back D’Onta Foreman 51 times. The nation’s leading per-game rusher gained 252 yards but fumbled twice, including with 3:53 left on Kansas’ 13-yard line and Texas leading 21-18. Afterward, Foreman took the blame for the loss, but fingers pointed at the play-calling.

At the postgame news conference, Strong barely raised his eyes from the ground. His wife, Victoria, cried outside the locker room. The next day, Texas reportedly decided to let him coach the regular-season finale against TCU, but no further. Strong will receive a check for the remaining $10.7 million on his contract. But many believe he won’t get another chance to coach at the highest level.

“When you’re a head coach of color, you don’t usually get a second chance,” said Keith, the former Black Coaches Association leader.

Sylvester Croom, who became the first black coach in the SEC at Mississippi State in 2004, was pushed out after four up-and-down seasons. He’s now coaching running backs for the NFL’s Tennessee Titans. Gene Chizik, a white coach who went 2-10 in his second season at Iowa State, jumped directly to head coach at Auburn for the 2009 season, where he won the 2010 national championship but was fired two years later. Will Muschamp, a white coach who got the Florida job many thought Strong deserved, was let go in 2014 after four years. One season later, South Carolina hired him as head coach.

Who will hire a black head coach who went 16-20 with the keys to college football’s richest kingdom? Does what happened at Kansas prove all those schools were right to pass Strong over? Does it validate McCombs’ cheap shot? Or could Strong have turned his team around with 19 starters back in 2017? 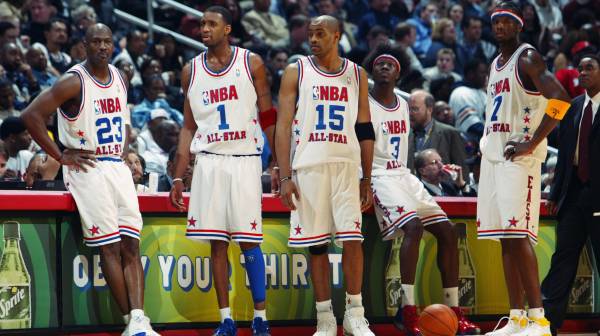 Wins are the ultimate arbiter. Strong lost. He will depart with financial security and a career full of providing opportunities that have proved elusive for black coaches at the highest level.

“When you have a chance to impact people, especially young people, then that’s what coaching is all about, where you have a chance to change a life,” Strong told The Undefeated before his dream fell apart. “I guess through the recruiting process, you see so many people from just different backgrounds and you want to help them.

“Because for some of them, this is the only chance that they have.”