Throughout the past decade, players around the league have honored Martin Luther King Jr. with special-edition sneakers featuring layered storytelling that celebrated King’s life and legacy. Brands have also released annual Black History Month collections each February in a variety of themes and colorways, with each year’s “BHM” pairs often debuted across the NBA up to two weeks early on MLK Day.

This year marks the 10th anniversary of Nike Inc.’s first comprehensive Black History Month collection, a black and gold accented capsule that originally celebrated King through the retro and current sneakers headlined by pioneers of basketball such as Julius “Dr. J” Erving, Michael Jordan and Kobe Bryant. According to Nike executive Jonathan Johnson-Griffin at the time, the 2011 collection kick-started the brand’s annual expanded series through a theme highlighting the “call to greatness” that pioneers both on and off the court have upheld.

To mark the anniversary, several of this year’s Nike, Jordan and Converse sneakers spotted on MLK Day gave a nod to the original “BHM” set. Albeit in a white base instead of the original black majority color, the gold accents remained, as did the original ligature-based interlocking “BHM” lettering logo created by graphic designer Erick Goto that has become an annual staple of Nike’s collections each February.

“We wanted to create [a logo] that has a signature feel to it and can have longevity with the project,” Goto said as the 2011 BHM collection first launched. “We wanted to build something that is strong and bold that can live on all of the shoes.”

The logo has stood the test of time, being featured on both footwear and apparel in the years since, and moving from the original heel placement to the left tongue of this year’s “BHM” Kobe 6 Protro that was worn most around the league on MLK Day as players honored the late Bryant.

Like many throughout the league, LeBron James also honored King with his own “BHM” pair, capping off the full slate of games with a handwritten mention of each member of the #JamesGang family, as well as using up the metallic gold real estate along the right heel to share some of King’s words and wisdom.

For the past four seasons, James has become one of the league’s leading sneaker scribblers, this time adding a favorite quote from King to mark the occasion:

“Our lives begin to end the day we become silent about things that MATTER!!!

As he has since Bryant’s death, Booker penned “Be Legendary” once again on his latest special-edition pair, honoring the inscription and message that Bryant autographed to the then-Phoenix Suns rookie after their last game facing off in 2016. 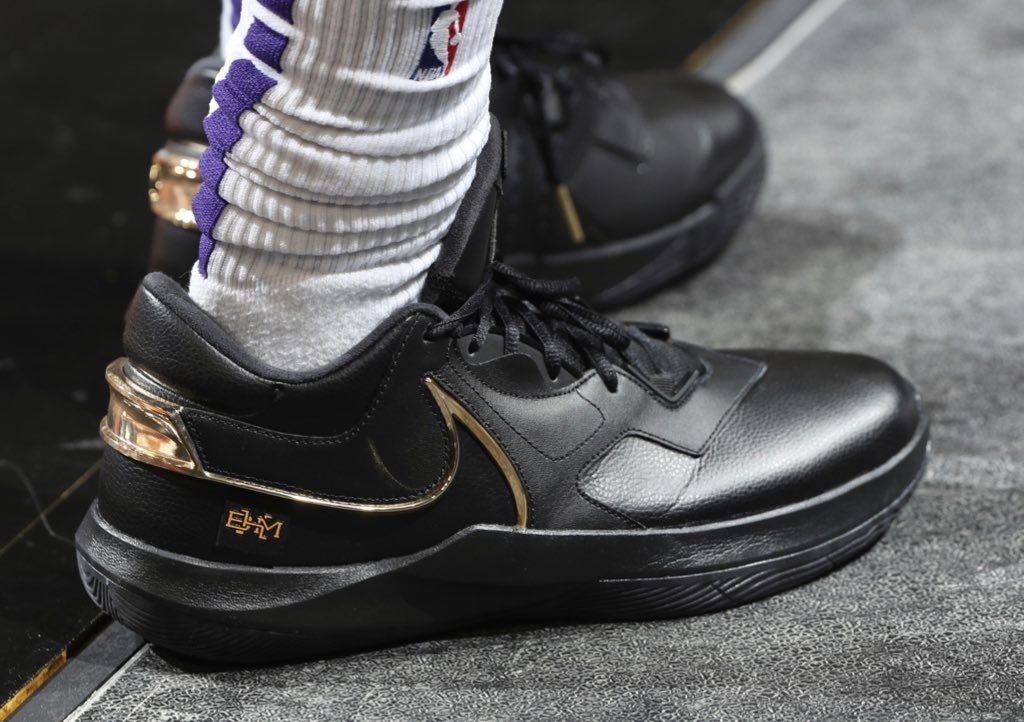 The sneakers worn by Chris Paul of the Phoenix Suns during pregame warm-ups against the Memphis Grizzlies on Jan. 18 at FedExForum in Memphis, Tennessee. (Joe Murphy/NBAE via Getty Images) 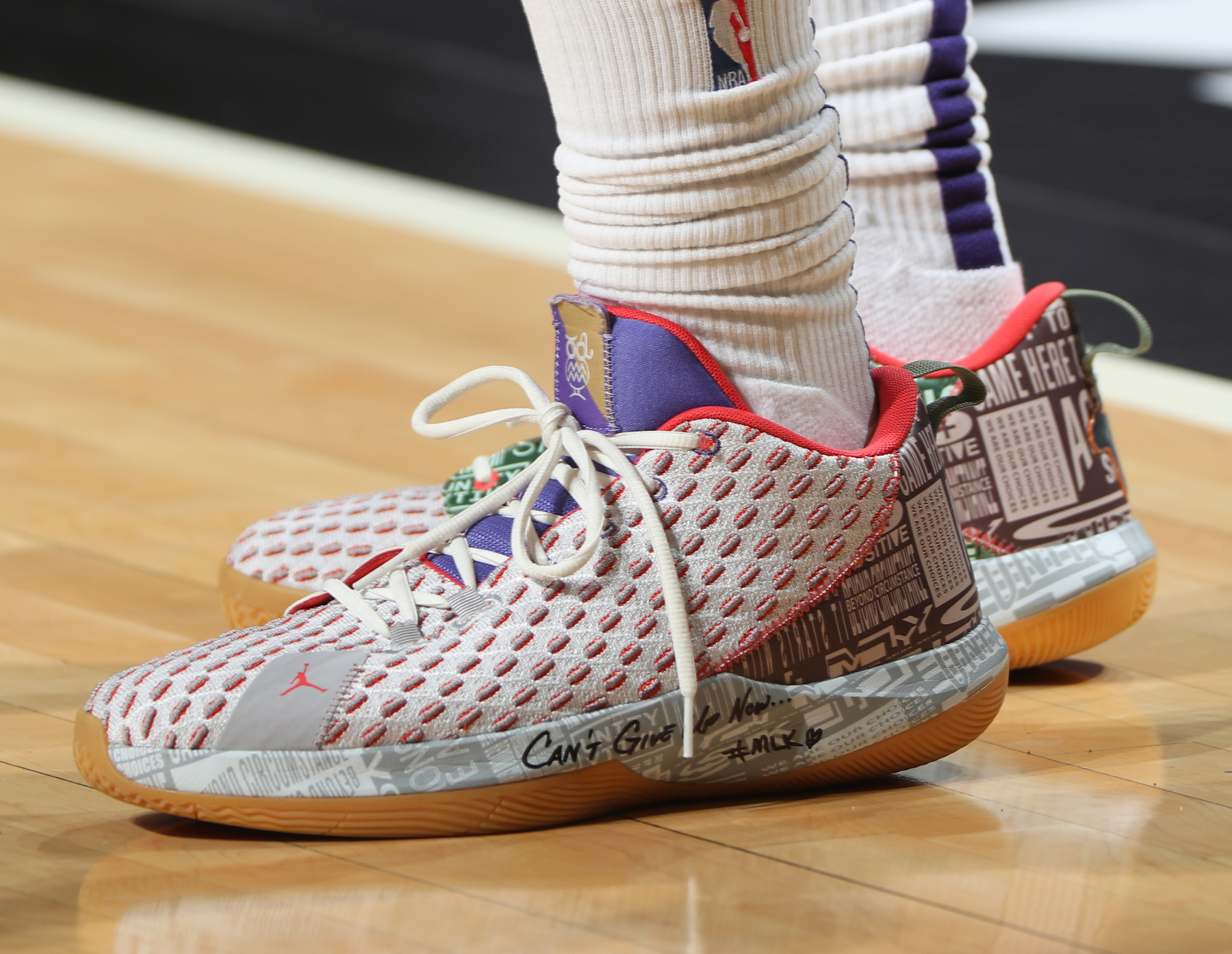 The sneakers worn by Chris Paul of the Phoenix Suns against the Memphis Grizzlies on Jan. 18 at FedExForum in Memphis, Tennessee. (Joe Murphy/NBAE via Getty Images)

After donning a simple black and gold “BHM” edition of his 13th Jordan signature shoe during pregame warm-ups, Paul switched to last season’s model depicting a series of phrases and quotes speaking to the brand’s “UNITE” theme. 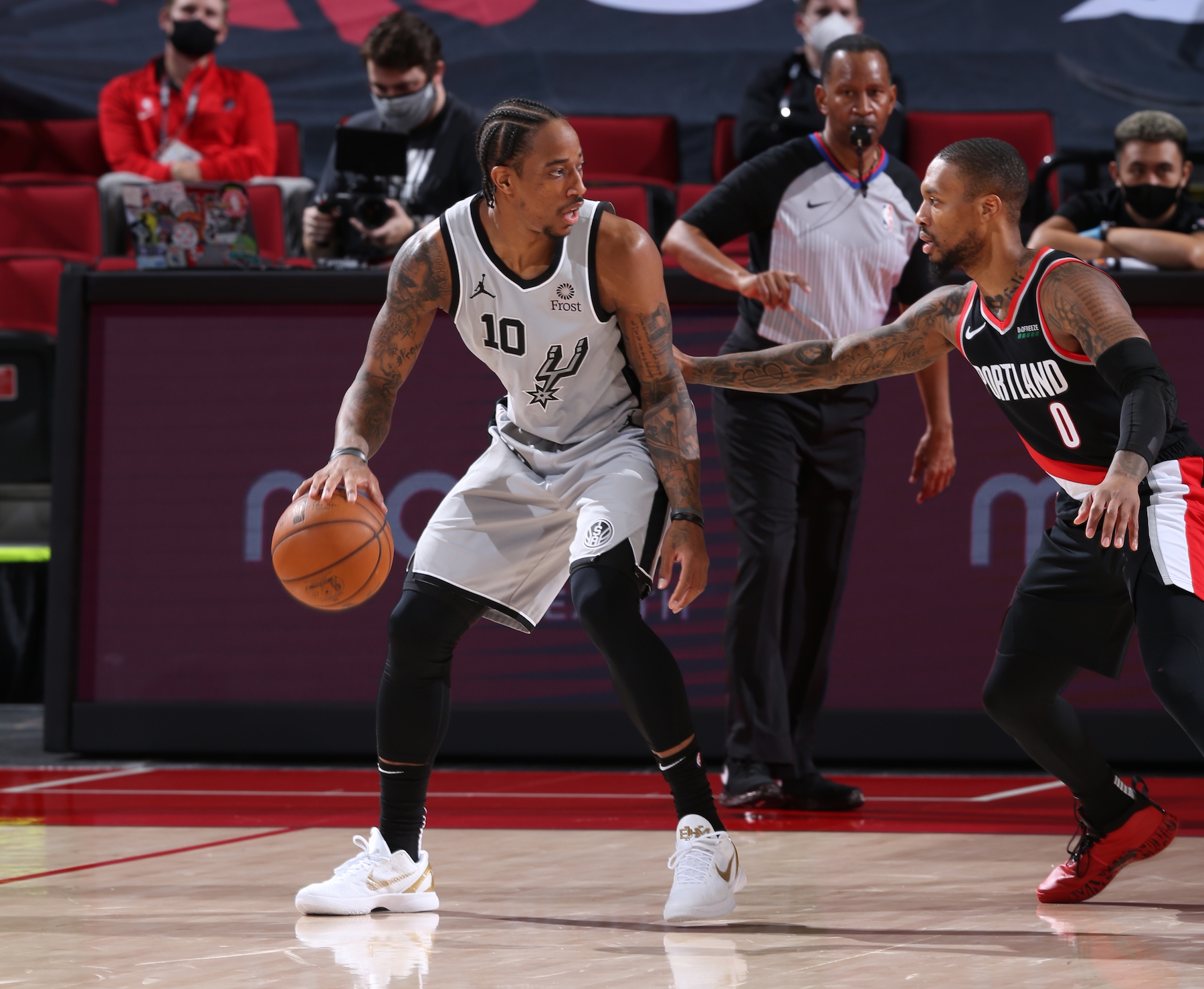 DeMar DeRozan (left) of the San Antonio Spurs dribbles the ball against the Portland Trail Blazers on Jan. 18 at the Moda Center in Portland, Oregon. (Sam Forencich/NBAE via Getty Images) 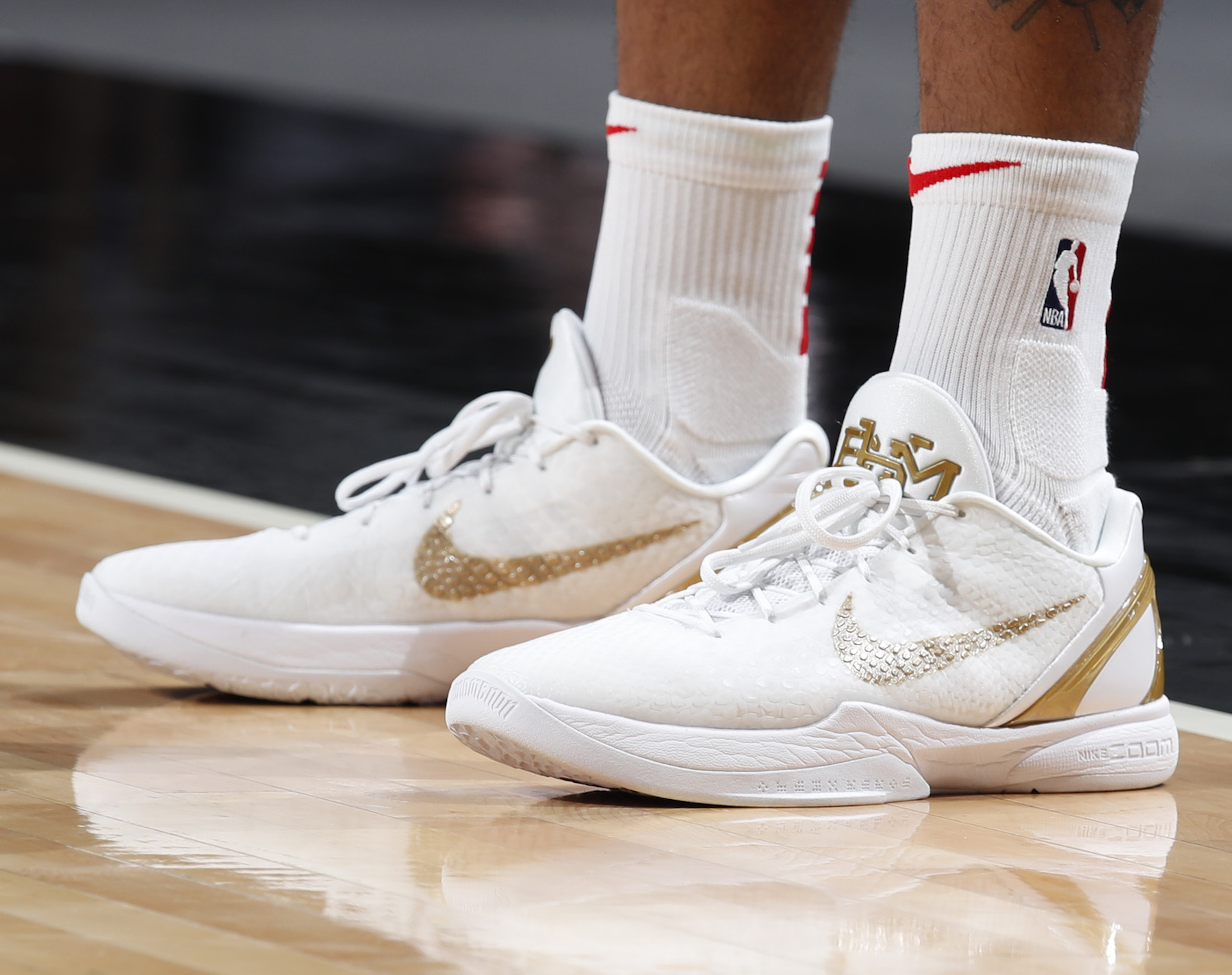 The sneakers worn by P.J. Tucker of the Houston Rockets during a game against the Chicago Bulls on Jan. 18 at the United Center in Chicago. (Jeff Haynes/NBAE via Getty Images) 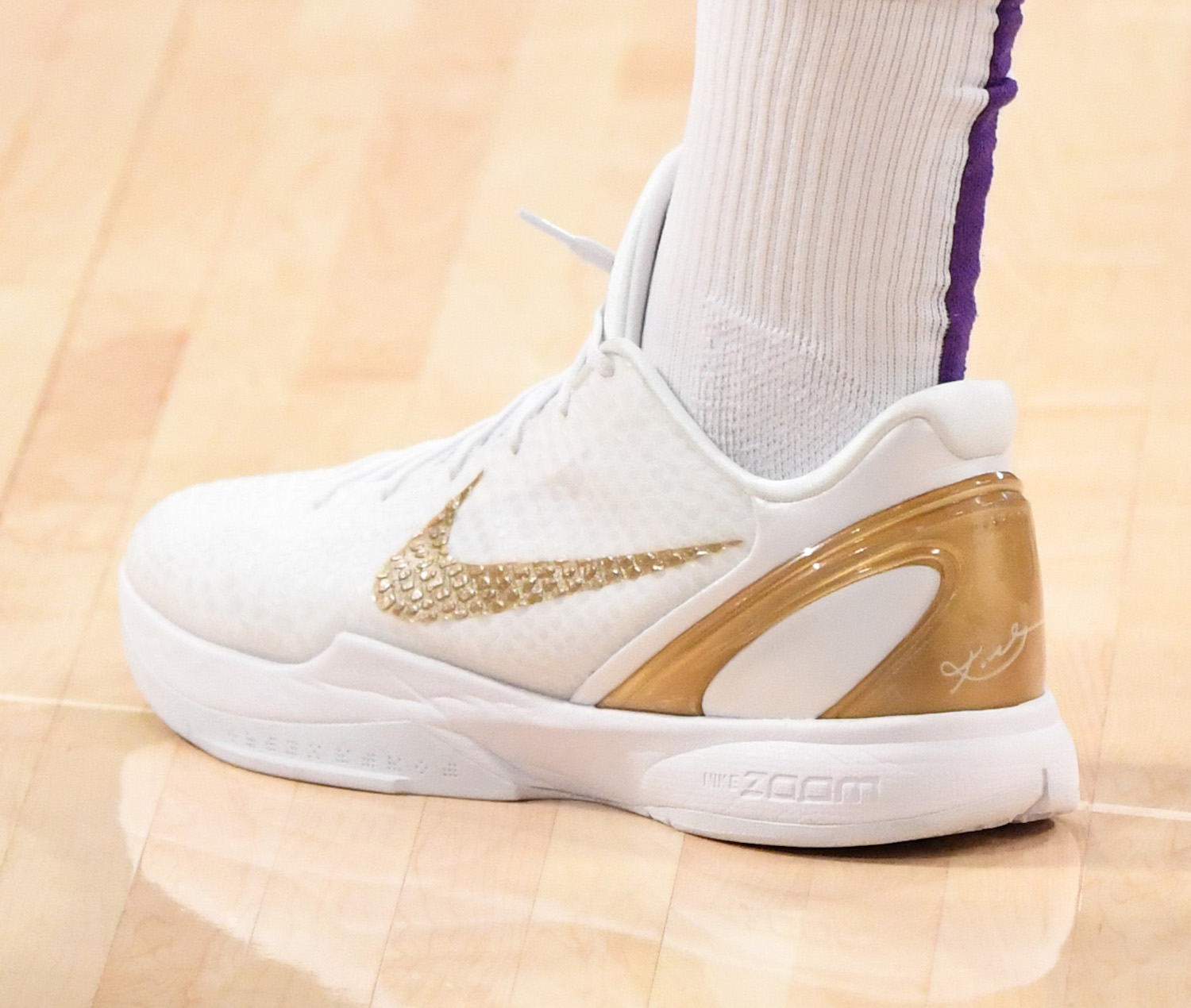 The sneakers worn by Anthony Davis of the Los Angeles Lakers during a game against the Golden State Warriors on Jan. 18 at Staples Center in Los Angeles. (Adam Pantozzi/NBAE via Getty Images)

Players all around the league honored Bryant in a flipped “BHM” look of the modernized Kobe 6 Protro, now taking on white and gold tones.

For the second year in a row, the Suns defender Jevon Carter highlighted his ongoing message for equality with one white and one black sneaker paired together.

All season long, the Trail Blazers’ highflier Derrick Jones Jr. has been spotted in Kevin Durant’s fourth signature sneaker from the 2011-12 season, this time opting for the “BHM” edition from nine years ago that featured graphics and patterns inspired by Kenyan beads and African American quilt making.

While not originally a “BHM” edition sneaker, San Antonio’s Trey Lyles dipped into one of the league’s greatest Kobe sneaker stashes and unearthed a black and gold Kobe 7 from 2012 from his collection to celebrate the colors that have come to be recognized most on MLK Day.

While also not wearing an officially MLK or “BHM” tribute colorway, Andre Iguodala shifted from his recent rotation of black-based Curry 8s he’d been wearing – in support of his former Warriors teammate’s new Curry Brand – opting for a simple white and metallic gold edition that tied into the gold-accented hues seen leaguewide.

Worn for perhaps his best game of the season, the Warriors wing added “My $oul has no skin” along the toe of each shoe, a nod to the sign he carried while marching in protest of George Floyd’s death while in police custody in May 2020.

Always outspoken, Draymond Green added “Times up!” in red along the side of each of his clean white Converse sneakers, likely a send-off to the final few days of Donald Trump’s presidency.