The Bucks now have some ‘dogs,’ will it be enough to get past the Nets?

P.J. Tucker and Bobby Portis bring what Milwaukee has been missing the past two postseasons

There’s a scene in the 2000 football film The Replacements where the protagonist’s team is down 17-0 at the start of the second half and needs a spark to get back in the game. On the first play out of halftime, the team’s quarterback, played by Keanu Reeves, calls a play meant to ignite an attitude shift in his team and strike fear in the opponent to turn the momentum in their favor. “Kickass, on one,” Reeves tells the huddle.

As soon as the center hikes the ball, Reeves’ squad begins to beat the holy hell out of the other team: spearing players from behind, kneeing them in the back, a couple of clotheslines. One player even drop-kicks another. The tactic works, as Reeves’ team comes from behind to win the game, sending them to the playoffs.

That play – and movie – has absolutely nothing to do with the upcoming second-round playoff series between the Brooklyn Nets and Milwaukee Bucks. But, “Kickass, on one” represents the attitude and mentality that two new players, P.J. Tucker and Bobby Portis, bring to a Milwaukee team that has been missing just that the past two postseasons.

During the Bucks’ first-round sweep of the defending Eastern Conference champion Miami Heat – who eliminated Milwaukee in five games in last season’s bubble – Tucker, a 36-year-old journeyman who was traded to the Bucks in March, said the team was able to limit the Heat’s offense because “we dogs,” and “people’s perceptions of us and what people think in the past, we’re erasing all of that. We’re coming out every night focused, not shying away from moments.”

That perception was most likely because, while the Bucks were a great regular-season team, their lack of adjustments, playoff experience and veteran leadership would do them in during the postseason. Which was mostly true, as evidenced by being knocked out of the playoffs by the Heat last year and the Toronto Raptors in 2019. The perception could also be that the team didn’t have that necessary edge to overcome adversity, and deficits, in the playoffs, the small things that separate the title contenders from the rest of the pack.

And looking at the Bucks roster over the previous two years, it’s clear that, scheme and strategy aside, they lacked the players one would consider “dogs,” the players who encapsulate every cliche in professional sports. Those who are physical, high-energy, tough, gritty, unselfish and maybe a little scary. Those who provide the stuff that doesn’t show up on the stat sheets, or in the words of Tucker, those who are willing to “bang.” They dive on the floor for loose balls or set the hard screen that frees the playmaker. For those players, it’s not about how many points they score, assists they dish out or rebounds they drag down, though it’s a plus when they can do both.

Malcolm Brogdon, Tony Snell, Kyle Korver and George Hill are all serviceable-to-good players who can help your team win, but they lack that it factor that can strike fear not only in opponents, but also possibly their own teammates. 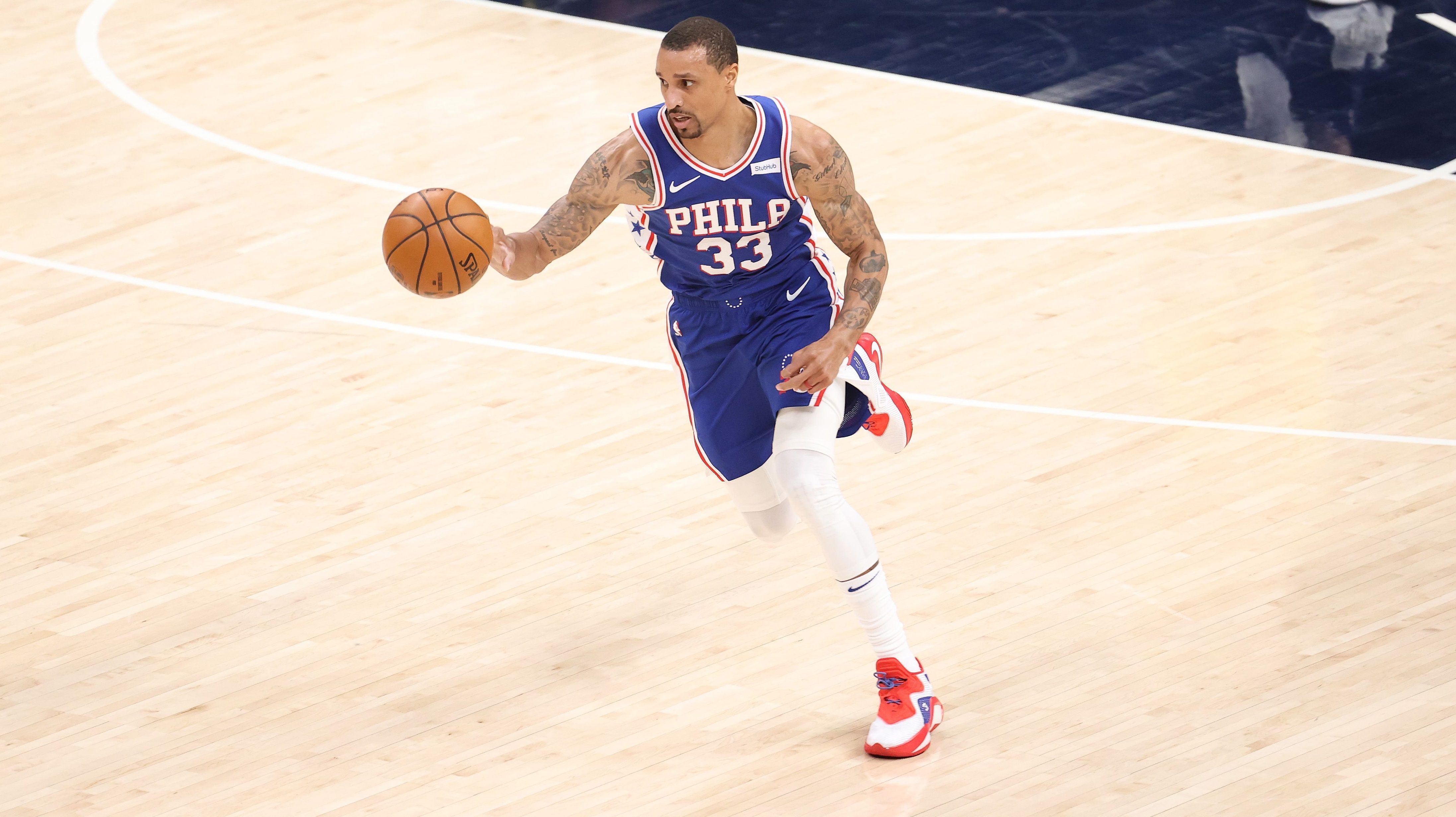 If recent championship history is any indication, sometimes you need a Udonis Haslem, Jimmy Butler, Kyle Lowry, Rajon Rondo, Draymond Green – players who will stand up to anyone and who lead by example when it comes to hustle and perseverance. Not to mention your Patrick Beverleys and Russell Westbrooks.

You could make the argument that the Bucks have been too nice over the past two years. You can’t say that anymore.

Portis, who signed with the Bucks in November, prides himself on being the player willing to let an opponent know that shenanigans against him or his teammates will not be tolerated. The man affectionately known as “Crazy Eyes” has clotheslined enough players throughout his career that it’d make former professional wrestler JBL blush. His dedication to being a “dog” was evidenced in the first round, when in Game 2 Miami forward Nemanja Bjelica committed a hard foul on Bucks star Giannis Antetokounmpo. While Antetokounmpo responded to the foul by kicking the basketball around the court like soccer star Neymar, Portis pushed and grabbed the jersey of Bjelica, earning a technical foul in the process.

“I’ve been doing that my whole career,” Portis said of defending teammates. “I’ve never been a guy who shied away from that. I’ve always been, when somebody hard fouls my teammate, I’d always be the one to be there, especially if I’m on the court.

Tucker can be just as confrontational as Portis. There’s a six-minute YouTube video titled: “P.J. Tucker CAREER FIGHT/ALTERCATION COMPILATION” to prove it. But for the Bucks, it’s been Tucker’s mouth, more than his hands, that has been most beneficial.

On a team with star players such as Antetokounmpo, Khris Middleton and Jrue Holiday – the latter two whose voices probably can only be recognized by residents of Milwaukee – Tucker has been one of the vocal leaders, so much so that “people probably get tired of my voice,” he said. Whether barking out defensive assignments or at referees, Tucker’s loud and booming voice can help when the team is tired and weary toward the end of games and need that jolt of energy – or kick in the butt.

“There’s a toughness that’s come with Bobby Portis, with P.J. Tucker,” Bucks head coach Mike Budenholzer said. “I think our group is built that way more than probably it’s maybe given credit for or understood, but anytime you can add guys like P.J. Tucker, Bobby Portis – that have a real toughness to them, on both ends of the court, willingness to play the right way, a competitiveness – you need more and more guys like that.”

And as Tucker points out, being a “dog” isn’t just about aggressiveness or even hard fouling, it’s a mentality of knowing your role and putting the team’s goals ahead of your own. (Tucker has said Holiday is “the quietest dog you’ve ever played with in your life.”)

“It’s being mentally prepared in situations, it’s knowing your position in certain spots when you’re guarding certain players, it’s knowing your game plan and following it. It’s doing all the little things that don’t show up on the stat sheet,” Tucker said. “That’s being a dog. It’s actually being smart.

“Whenever you look at a series, you can go down the line for every championship team, they had those type of guys that just did everything that nobody else can do the best. That always makes the difference.”

Antetokounmpo has played against Portis and Tucker many times over the years, so he wasn’t surprised by what he was getting from the two when they joined the team this season.

“You know which guys in the league … are going to give everything for the team and which guys are about winning and not about themselves,” Antetokounmpo said. “Before they even joined the team I knew they were dogs. I didn’t have to figure that out once I met them. I knew it already.”

Portis and Tucker bring more than their doggedness, though. Portis ranked third in the regular season in 3-point percentage (47.1%), helping space out the floor for defenses that choose to build a wall against Antetokounmpo. While Tucker isn’t quite the defender he used to be, Butler shot just 15.4% from the field when Tucker was the closest player guarding him during the first round, according to Second Spectrum. That likely won’t hold up against the likes of Kevin Durant, Kyrie Irving and James Harden – whom Tucker has struggled against all season both with the Bucks and his previous team, the Houston Rockets – but it won’t be due to a lack of effort.

It has only been four games, but the Bucks appear to have grown from the past two early playoff exits, including dropping four straight to the eventual champion Raptors in 2019. The wall hasn’t slowed down the offense as it did in the past. The Bucks fell behind by as many as 12 points in the first half of Game 4 against the Heat, but instead of, in the words of Antetokounmpo, playing with their food, they came charging back to win by 17 points. The East semifinals and possible conference semis will be different tests, but the old knocks on the Bucks not being prepared for the playoffs seem to be gone.

For Portis, in particular, this will be a season he cherishes the most. Of his six seasons in the league, this is only his second playoff berth. The teams Portis has finished the season with the previous three years averaged just over 26 wins. Being on the Bucks, he said, makes him want to be a better player and actually want to come to work.

So if that means yoking someone up or being considered the bad guy, he’s fine with that perception.

“I’m not really just trying to be buddy-buddy with nobody on the floor,” he said. “… I’m just playing my role. And if there’s a hard foul or whatever, stepping in and letting people know that we’re here. There’s been times where in this league people can sense when certain guys are scared, they can smell blood.

“I don’t think you can smell blood on this team.”