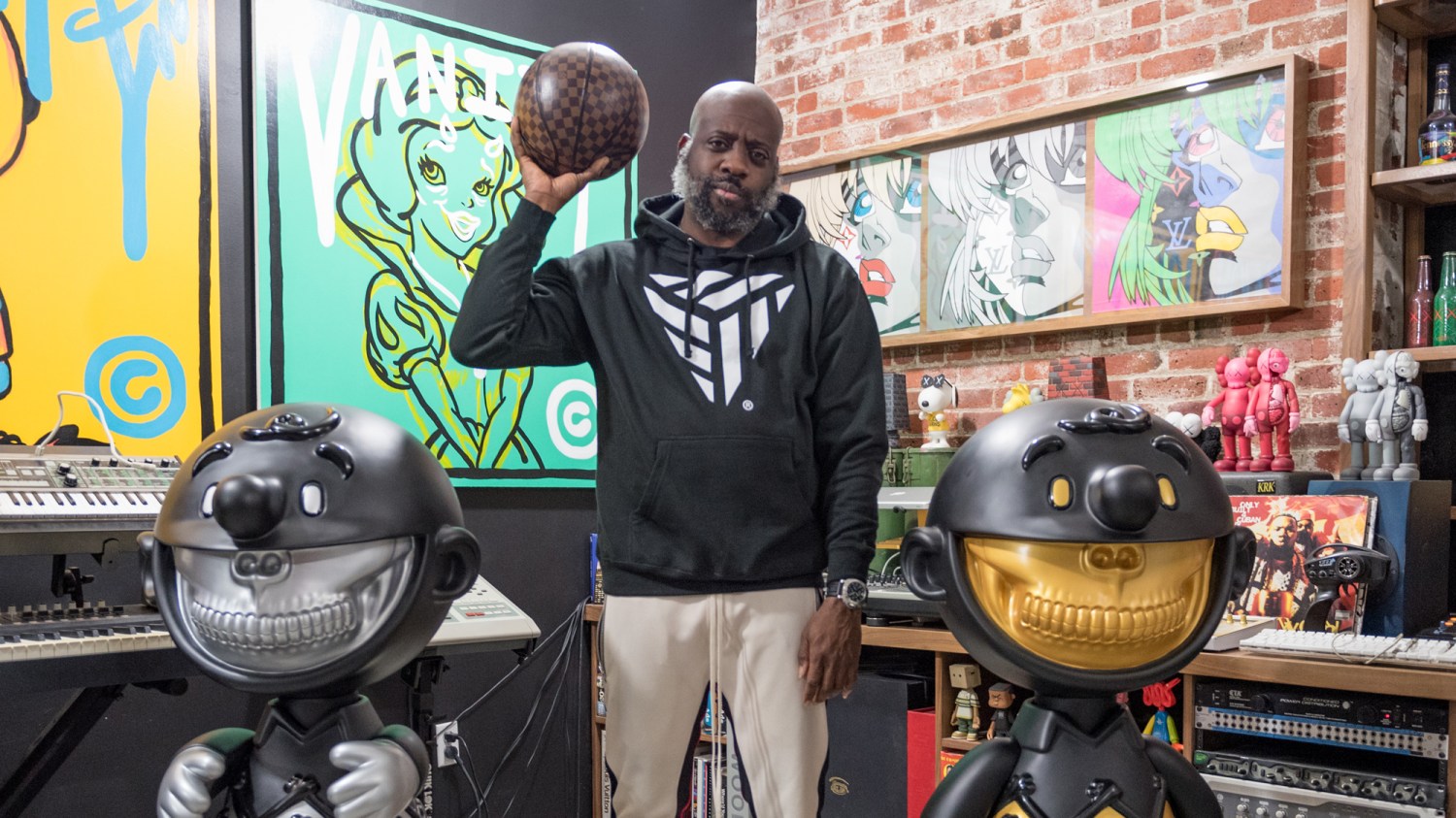 DJ Set Free with his 4 feet tall “Black Charlie Grin” Compound x Ron English statues. Set Free is the creator of The Compound as well as the originator of the And 1 Mixtape series. David "Dee" Delgado for The Undefeated
Basketball

The Compound is compounding culture

A spot where art, hip-hop and the NBA collide

Hip-hop has always been a culture of many melding ingredients — The Lyricist, The DJ, The B-Boy and The Graffiti Artist — all pieces of a movement created in the ’70s. And as much as the culture has changed, so have its components. They have grown and blossomed and blurred the lines with many other genres.

Enter DJ Set Free, the Bronx, New York-born, Queens, New York- and Philly-raised DJ who was signed to the infamous Tommy Boy Records in 1997 as a member of a group named Deadly Snakes. He was also one of the label’s beat makers. One short year later, he was working for AND1 as its director of entertainment marketing. One day while watching a VHS tape of Rafer Alston playing at Rucker Park, he turned down the sound as he normally did and started mixing some records when he suddenly had an epiphany. Later that year, The And1 Mixtape Vol. 1. was released.

The groundbreaking streetball series mixing hip-hop with ostentatious displays of skill became the blueprint for future NBA players such as Jarrett Jack, Iman Shumpert, Kevin Durant and countless others. Jack remembers pooling his money with a friend to buy one of the Volumes and watching it every day after school and practicing and mimicking the moves he saw on the VHS tape. After working on six of the 10 volumes and inspiring a generation of future basketball players, the marketing executive moved on to his next creation, The Compound, a studio, incubator and creative space for his marketing firm, The Oval Co.

Merriam-Webster’s dictionary definition of “compound” is to put together (parts) so as to form a whole: Combine compound ingredients. In 2007, when Free was consulting and collaborating with companies such as EA Sports, Universal Records and Nike’s LeBron 5 and 6 sneakers, he starting calling his music studio The Compound. He also started to incorporate action figures, art and video games into his work — the methodology was to build a playground for creativity across multiple artistic genres. “Music studios are boring, nothing stimulating to look at, just plain walls, soundboards and big equipment. In photography studios, all you have are lights and white backgrounds. Why not have a place that intrigues and stimulates with art, visuals, and sounds?” he said.

#mondaymotivation – “So many people doubted me. They motivated me every single day to be who I am.” #kevindurant Basketball x Art – Know that we are #puttingtheplantogether #StayTuned #compoundapproved

The Compound was originally located in Southwest Philadelphia, but three years later, Free and his wife Liza decided that a relocation to New York was the best choice for their growing endeavor. They choose the South Bronx as The Compound’s new home. Free believed it was symbolic to bring his studio and his interpretation of the genre’s evolution and growth to the birthplace of hip-hop. Walking into The Compound is like a Hypebeast’s dream come true: a wall full of Kaws toys, along with the KAWS x Air Jordan 4 sneakers, basketball jerseys signed by Allen Iverson, Shumpert, John Starks and an Akai MPC 3000 production center signed by The Alchemist, 88-Keys, Prince Paul, DJ Green Lantern and others, are just a few of the gems you see at first glance.

One of the oldest sayings in hip-hop is that “rappers want to be ballers and ballers want to be rappers.” Ask Free his most memorable memory in The Compound and he’ll say, “Hands down, it was one night when Brooklyn rapper Sandman, Yasiin Bey [Mos Def] and Iman Shumpert and me were just hanging out. I was playing with some beats and a cypher broke out. First Sandman went in the booth and dropped a hot verse. Not to be outdone, Yasiin Bey went next and set fire to the mic. Next then went Shumpert, and no one expected much, and he proved everyone wrong. He went on to hold his own with two veteran lyricists and earn their respect on the mic.”

When asked about his next big thing, Free just grinned and said that 2018 is the 20th anniversary of the AND1 mixtapes and something game-changing is in the works.

We are grateful for an amazing year we had so many talented and inspiring individuals visit the compound. @lifeofdesiigner #TheCompound #WeCreateCulture

Brent Lewis is a former Senior Photo Editor of The Undefeated and a lover of all things Chicago except Chicago Mix popcorn. #justcheeseplease