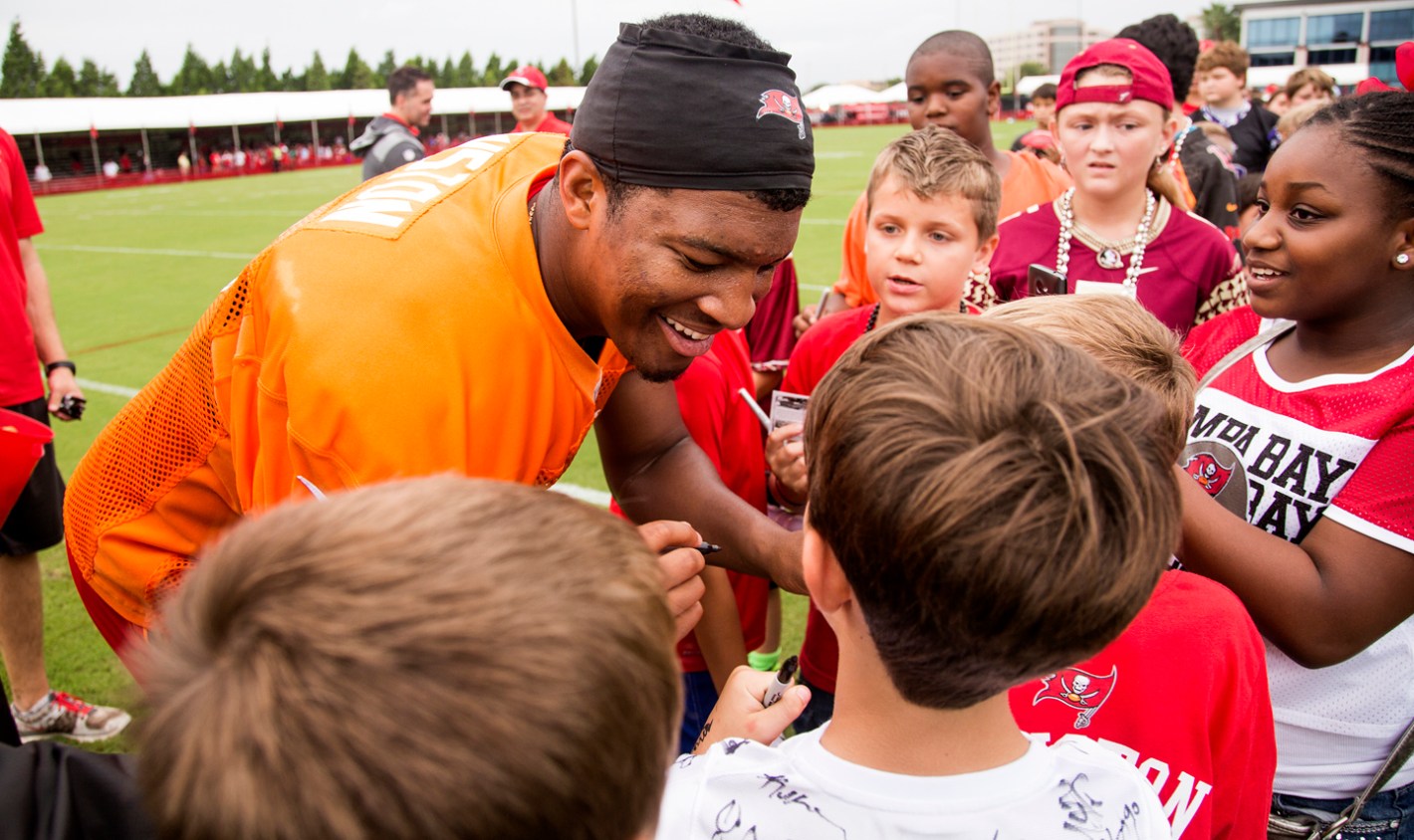 The continued maturation of Jameis Winston

Winston’s off-field issues have been well-documented, from his shoplifting citation to the sexual-assault allegation for which he wasn’t charged. He believed it was important to bring up his own struggles in life in order to connect with the campers and make sure that his message resonated with them. As he told them, “If you can’t take criticism, you shouldn’t be playing football.”

“A lot of these kids face adversity and may feel stuck there,” Winston explained to The Undefeated. “But you always have to get back up and try again.”

The quarterback arrived at 7:30 a.m. and stayed for nearly seven hours. During that time, he ran the campers through stretches, conducted drills, timed 40-yard dashes and gave multiple inspirational speeches to the 400 children. To an onlooker, it might have seemed that this was Winston’s camp.

“It blew me away,” Murphy said with a laugh. “People were surprised, and I didn’t even expect him to be so involved. But he cares so much. He cares about the kids and this community.”

Winston entered the NFL dogged by questions about his maturity. Besides the aforementioned matters, in 2012 he and some teammates were held by campus police for allegedly firing BB guns at squirrels and there was an incident on the Florida State campus when he stood on a table and yelled the words of a vulgar meme.

“I get asked all the time, ‘How is he really?’ ” Murphy said. “I’m always like, ‘Come on, man. Why are you asking me these questions? He’s a great kid.’ He’s made some mistakes, but he without sin can cast the first stone.”

“His work in the community is like no other,” said Buccaneers defensive tackle Akeem Spence, who was also a counselor at the camp. “He’s always giving back, volunteering, supporting good causes and showing up at teammates’ camps. He is always willing to give a helping hand, no matter who asks.”

Winston grew up in Jefferson County, Alabama, but since attending Florida State, the No. 1 pick of the 2015 NFL draft is becoming a Florida guy.

“It’s very important to me,” Winston said of his work in the community. “I know I can’t be in my hometown all the time, but I can be a face and be a voice in St. Pete and Tampa.”

Winston put the league on notice in his rookie season. His 4,042 passing yards and 22 touchdowns were good enough to earn him an alternate spot in the Pro Bowl. The season featured many personal highlights, such as when he threw an NFL rookie-record five touchdowns in a 45-17 stomping of the Philadelphia Eagles.

But Tampa finished just 6-10 for the season. It was a four-game improvement from the franchise’s dreadful 2014 season, but still not enough to even sniff the postseason. These days, Winston is putting his mind to getting the Buccaneers into the playoffs and continuing his emergence as, perhaps, the best young quarterback in the NFL. His teammates rave about his professionalism and believe that it’s only a matter of time until he’s mentioned among the game’s best passers.

“You can tell he is working to be the best quarterback in our league,” Spence said. “In terms of work ethic, Jameis is one of the hardest-working guys on this team. At the same time, he’s bringing others along with him and being the leader this team needs.”

“Jameis is the hardest-working player I have been around,” Buccaneers wide receiver Mike Evans said. He and Winston connected 74 times last season, but Evans’ touchdowns dropped from 12 in his rookie season in 2014 to just three in his second year. “Our chemistry is getting better and it will continue to get better. We have the same goal, and that is to win.”

Murphy’s praise for Winston is extremely lofty and is sure to raise some eyebrows.

“Words can’t really explain how impressed I am with his ability to focus on his craft,” Murphy said. “People don’t understand how serious he takes this. It’s incredible how well he listens; he hangs on every word. I played with [quarterbacks] Cam Newton, Eli Manning and JaMarcus Russell, who were all first-overall picks in the draft, and there’s just something different about Jameis and his approach to the game.”

That’s lofty praise, with Manning being a two-time winner of the Super Bowl and Newton coming off an MVP season. But Winston’s stats were almost identical to Newton’s rookie season and he outperformed Manning’s production in his first season as a starter.

“I would rate his football IQ at 100 out of 100,” Murphy said. “He just understands football. And he wants to keep getting better. It’s so contagious, too. When you see your quarterback working that hard, it makes you want to work harder. He understands what the task at hand is and he doesn’t want to let the city of Tampa down. He’s a winner and he wants to deliver.”

Winston expressed his excitement about these moves on social media when they occurred, and reiterated that he believes general manager Jason Licht did a terrific job assembling this roster (Evans said it’s “playoffs or bust” for the Bucs).

“I love them,” Winston said of the offseason acquisitions. “I love them. I just can’t wait to get out there and start training camp so we can start playing.

“I have very high expectations [for next season]. I’m way more comfortable now. I feel like I’ve been there and done that, but I do still feel like I have to get better every day.”

In an effort to help the Bucs take that next step, Winston lost 18 pounds over the offseason. The weight loss was so noticeable that several of the camp volunteers commented on how slim he looked. He also had some words of caution for the youngsters.

“Everybody out here is different. I’m lame! I can’t crack on nobody,” Winston willingly admitted to the group. “You guys can crack on me and embarrass me and [roast] me. But if we put them cleats on, then can’t none of ya’ll beat me!”

Alex Kennedy is the managing editor of Basketball Insiders.