Not every superhero is larger than life 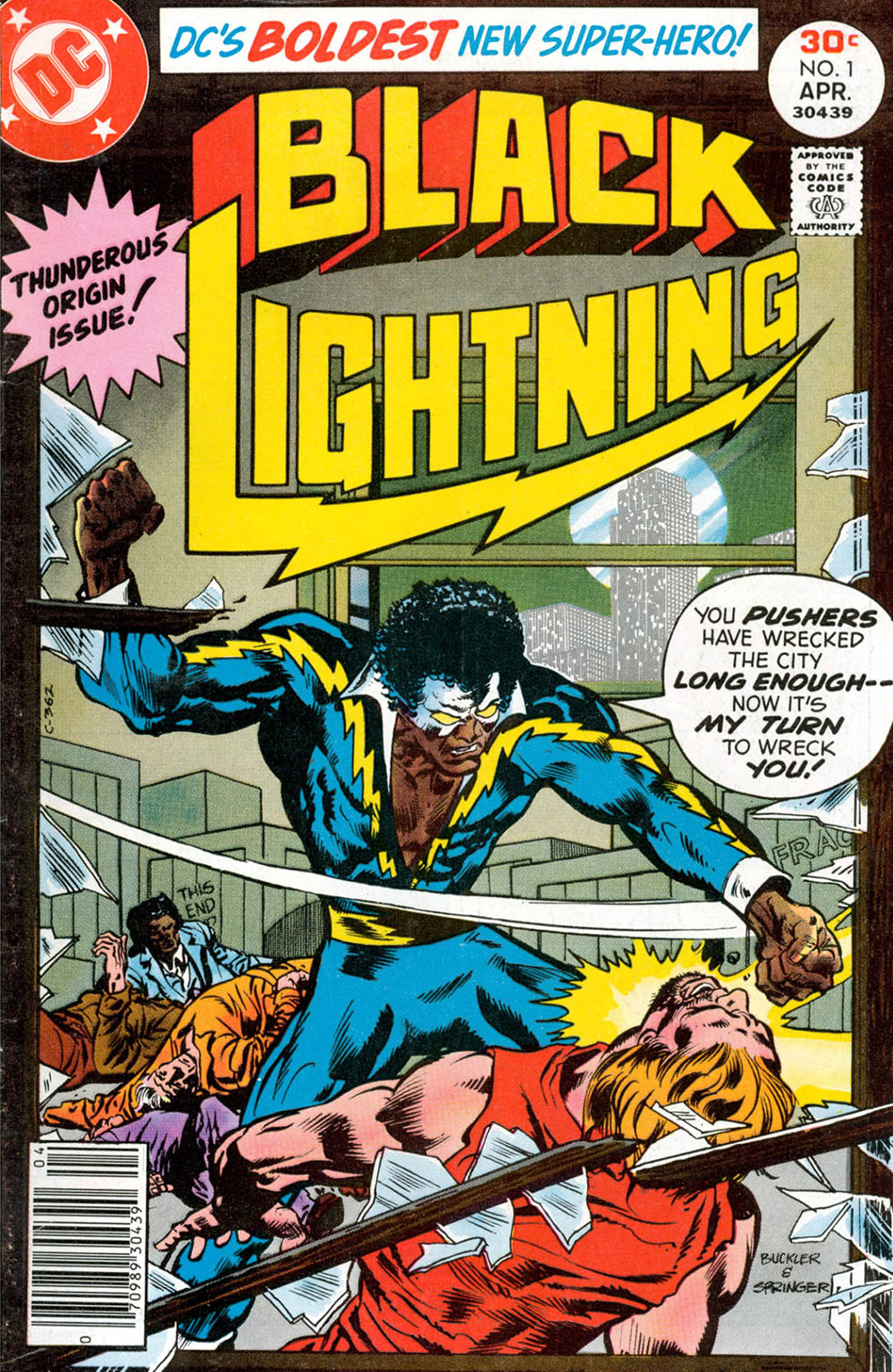 During the 1970s, the major black comic book characters were either African royalty (The Black Panther), a brainwashed criminal (Falcon) or a wrongfully convicted ex-convict (Powerman, aka Luke Cage). It’s an understatement to say that representation of relatable black characters was scarce. Fortunately, comic book writer Tony Isabella stepped in to help fill the void. In 1976, he turned Marvel Comics’ character Bill Foster — once just a lab assistant to the original Ant-Man — into Black Goliath, a hero with the ability to instantly grow to more than 20 feet tall. Later, Isabella created DC Comics’ very first major black superhero: Black Lightning, aka Jefferson Pierce. Black Lightning No. 1 was released in April 1977. On the cover, Lightning, with his Afro, is beating up a group of drug “pushers.” A banner names him “DC’S BOLDEST NEW SUPER-HERO!” It was drawn by Rich Buckler and Frank Springer.

Within only a few pages of the first issue, Pierce is immediately thrown into a conflict with The 100, the latest criminal organization to have a deadly grip on the Suicide Slum neighborhood. Things take a tragic turn when one of his students is killed in an accident while fleeing from The 100. Pierce then makes it a personal mission to take full advantage of his Olympic-level athleticism. And while in future stories Black Lightning had the ability to generate and control electricity, in No. 1 he had a superpowered suit that could generate enough energy to knock even Superman off-balance.

Isabella, who still regularly appears at comic book conventions across the country, is still one of Black Lightning’s least forgiving critics.“I suggested Black Lightning beating up on pushers. A mix of black and white drug pushers,” he said. “I felt this would establish the street-level tone of the series. I did write the cover copy for the issue, though my lettering notes [which words would be in boldface and so forth] were misunderstood. The cover still reads badly to me.”

Black Lightning surely turned out better than its alternative likely would have. When Isabella originally signed on to work with DC Comics, he was charged with retooling two scripts for a character called “The Black Bomber.” The Black Bomber was an overtly racist white man who would transform into a black man during dangerous situations. Fortunately, Isabella was able to persuade his editors to publish Black Lightning’s story instead.“It still amazes me to this day that I had to explain to them that it would be a really bad idea for their first headline black superhero to be a white racist,” Isabella said.

The initial reaction to Jefferson Pierce was by no means record-breaking, but his story was gaining fans in the right places. “There was genuine enthusiasm for Black Lightning,” Isabella said. “The older and more stodgy DC executives just saw it as a way to get money from ‘little black kids,’ but the younger DC folks and a few smart guys like [former vice president of DC Comics] Joe Orlando really liked the character, and my writing.”

Isabella wrote the first 10 issues of Black Lightning before handing responsibilities over to fellow comics writer Dennis O’Neil in 1978. Unfortunately, the series that was created during DC Comics’ rapid expansion in the mid-’70s was soon one of more than a dozen casualties in a wave of title cancellations known as the “DC Implosion.” But this is not a reflection of the series’ impact.

“I’m told that … it was almost not canceled,” Isabella said. “I’d parted ways with DC by then, but, even without his own title, Black Lightning never went away for long.” Recently, DC Comics and Isabella have reconnected. After a lot of ups and downs, DC reprinted the original run of Black Lightning for the first time in 2015, including a 12th issue that hadn’t been released until much later in 1978, due to the series’ cancellation.

And the character is looking to make a lasting impression with contemporary audiences in other ways. It was recently announced that a Black Lightning television series is in the works, with Mara Brock Akil and Salim Akil — the couple behind Girlfriends, Being Mary Jane and The Game — at the helm. FOX has officially made a pilot commitment for the series and Isabella hinted that he may even be involved with the project. “I have spoken with Mara and Salim, and I’m excited about their plans,” Isabella said. “I can’t say more at this time, but I am far from finished with Black Lightning.”

Bio: Keith is a writer, professional binge watcher and a fifth generation Chicagoan. As a rediscovered nerd, you'll likely find him simultaneously playing catch-up and keep-up in the worlds of comics, anime and professional wrestling.