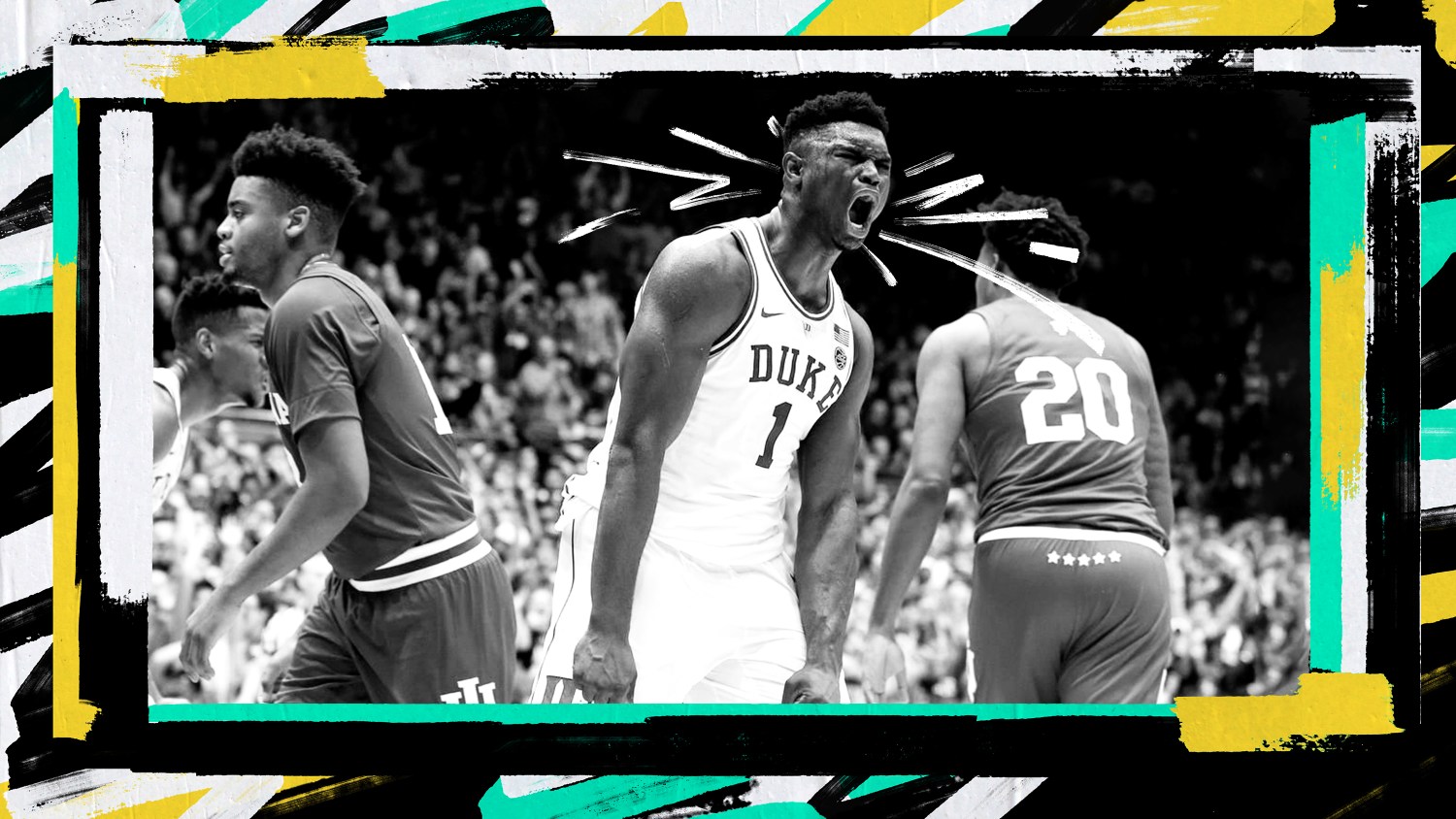 There’s a history of high school hoops legends, but this Blue Devil is next-level

This was inevitable. Inevitable from the moment we first saw high school phenom Zion Williamson take off from a few steps below the free throw line, spin in the air with the ball between his legs and dunk. Now the freshman Duke forward, who’s plowing through the NCAA tournament to the Sweet 16, averaging 28 points and seven rebounds, is the subject of “Zion Cam.”

CBS coordinating producer of college basketball Marc Wolff made the announcement in Columbia, South Carolina, newspaper The State on March 21: The network would dedicate a camera operator and camera to Williamson, the presumed No. 1 pick in June’s NBA draft, as he seeks a national championship. That would be the cameraperson’s only job.

This one-camera-on-one-athlete thing is a first for CBS NCAA coverage, but it’s nothing new for Williamson. Cameras have been following him since high school, capturing seemingly every dunk and making him a household name before he was old enough to drive.

The earlier cameras that followed him, of course, were attached to smartphones. Highlights of Williamson’s gravity-defying dunks were edited for impact, set to hip-hop beats and uploaded to popular YouTube accounts such as Ball Is Life and its partner site Hoopmixtape, garnering millions of views. There’s some liberal editing of dunks that align with the 808s, as well as crossovers that catch the beat of snares that are spread via social media, group texts and fans huddled around smartphones in barbershops and on basketball courts across the world.

Although Matt Rodriguez, Nils Wagner and Jonathan Durden, who together formed Hoopmixtape and Ball Is Life, aren’t black, these videos follow in the black sports tradition of making superstars out of high school ballers and streetball hoopers to the point that they become urban legends. Williamson reached urban legend status before he ever put on a Duke jersey, and he has social media to thank for it.

“Because of Zion [Williamson], we have added a camera dedicated to him the whole time he is on the floor,” said CBS’s Wolff. “We hired a cameraman, a camera, a digital tape machine to record everything he does.”

This content play adds fuel to the fire for those who believe that college athletes should be paid — after all, even the cameraperson dedicated to Williamson is getting paid while the player he’s filming continues to play for free. Sports Illustrated NFL reporter Albert Breer echoed a common refrain for those who believe Williamson’s compensation, a scholarship to one of the best universities in the nation, is enough: “Zion Williamson is one of the few who benefits from the one-and-done rule,” he tweeted. “Without it, no way would he be entering the NBA as marketable and set for endorsement [money] as he is now.”

What Breer is missing is the power of social media and the way in which young basketball players in particular benefit from grassroots buzz — a tradition that has been around since before Wilt Chamberlain was wowing crowds at Philadelphia’s Overbrook High. The urban legend of Tracy McGrady windmill-dunking on James Felton during an Adidas camp reached mythological proportions: Fans scoured the world for a video of what Lamar Odom, who witnessed the dunk, called “one of the best basketball moments of my life.” The moment propelled McGrady to NBA prospect status and nuked Felton’s pro hopes.

The early 2000s saw the rise of AND1 Mixtapes, VHS tapes that featured highlights of streetball legends such as Rafer Alston, who made it to the NBA, but also made stars of guys who never came close and who were known by code names: Hot Sauce, The Professor, et al. These mixtapes were full of clips from courts such as New York’s Rucker Park, where streetball legends have been made for decades. These tapes were powered by black fans, made the rounds in urban circles and created a new American basketball mythology that went beyond the NBA. When online videos and YouTube took over, the shift was natural.

Ball Is Life, which launched in 2005 and later joined with Hoopmixtape, has been the premier hub for high school highlights online and has helped create buzz for future NBA players such as DeMar DeRozan (above), Brandon Jennings and Derrick Rose and hyping players who didn’t quite pan out, such as Seventh Woods, whose 2013 mixtape of his best dunks from his freshman year of high school has racked up 15 million views and counting. Still, no star has created the buzz of the already-first-name-basis star Zion.

There’s just something about Williamson that makes his videos the most captivating of the new-age YouTube mixes. First, he looked like a grown man playing against children. His 6-foot-7-inch, 285-pound frame swatting layups from kids with braces and scrawny arms made him look like a Monstar from Space Jam had landed on Earth ready for revenge. Williamson’s behind-the-back dribbles that brought defenders to their knees looked like they shouldn’t be possible from someone his size.

Then there are the dunks. The 360-degree, between-the-legs dunks. The windmills and the posterizations, eye-level with the rim. Williamson has been called “the next LeBron” thanks to the number of videos of his exploits at the fingertips of casual basketball fans. His legend was secured before he even put on a Duke jersey, and his superstardom has done more for Duke’s marketability than Duke’s cachet has done for Williamson’s. The school even has black fans now. (ESPN is joining in on the mixtape craze, dropping videos of all of Williamson’s dunks in college — complete with hip-hop in the background.)

No star has created the buzz of the already-first-name-basis star Zion.

When Williamson takes the stage at the NBA draft in New York on June 20, presumably as the No. 1 pick, his college freshman stats will have brought him there: 22.7 points per game on 67 percent shooting and 8.7 assists per game. His monster ACC tournament and NCAA tournament runs will be the reason.

But when Williamson signs his endorsement deals for shoes and beyond and the inevitable marketing push starts to further his brand, it’ll be due to the grassroots movement, the cellphone footage, the YouTube videos and social media shares that connected Zion to fans before he stepped on a college campus.