‘We were dying out there:’ Inside the Warriors’ nightmare

OAKLAND, Calif. — DeMarcus Cousins has never liked horror flicks. But during the 2019 NBA Finals, severe injuries made Cousins and the rest of the Golden State Warriors feel like they were in a scary movie.

“It was like, ‘Who is going to die next?’ You really just wanted to get to the end so you could see who survived,” Cousins told The Undefeated.

The Toronto Raptors won their first NBA championship after defeating the Warriors 114-110 in Game 6 on Thursday. The Warriors respected the Raptors in their title quest and didn’t want to use their injuries as an excuse, but their injury woes were freakish, to say the least. 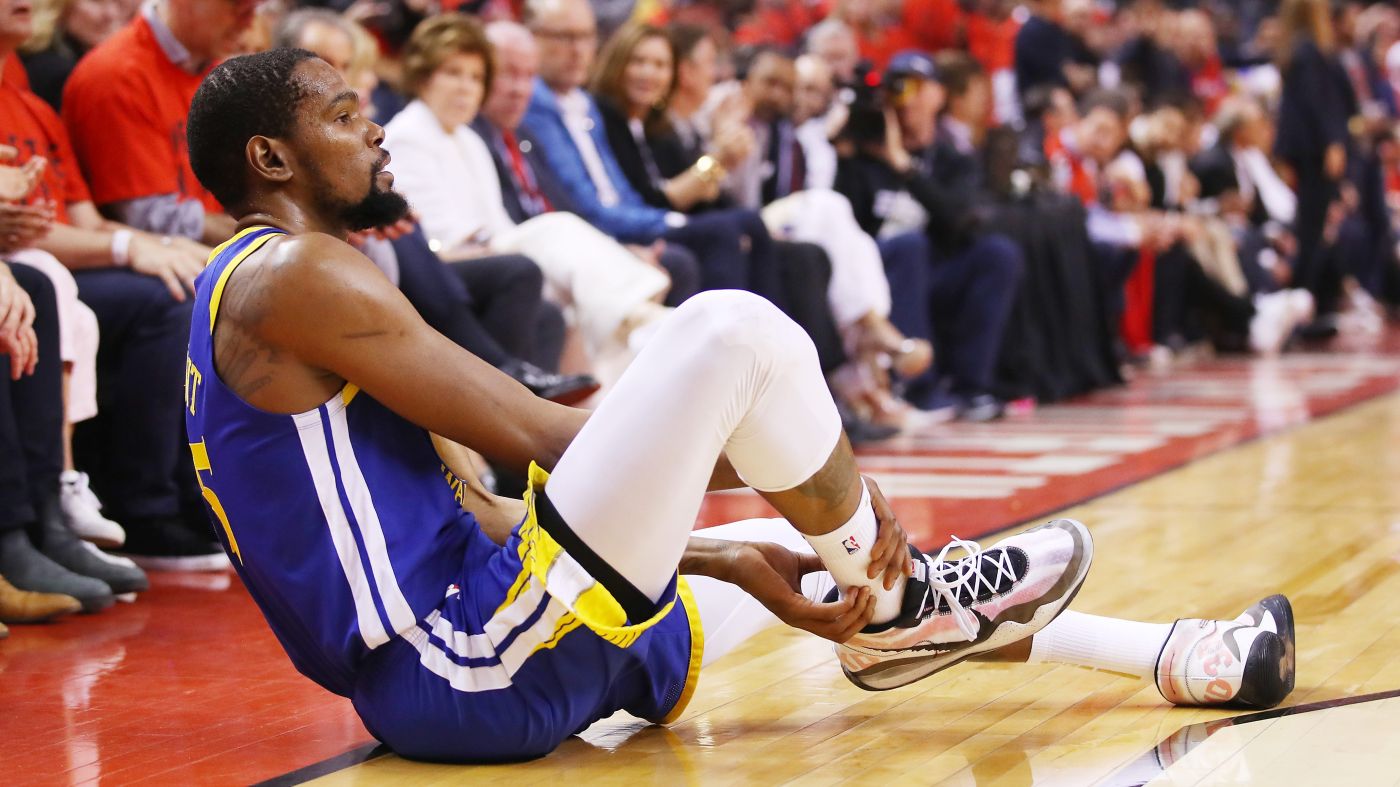 Kevin Durant and the dehumanization of black athletes Read now

– Star forward Kevin Durant tore his Achilles tendon in his 2019 Finals debut in Game 5 after missing the previous nine games of the playoffs with a left calf strain. The 10-time All-Star had surgery on Wednesday in New York City. On Thursday, the Warriors gave away yellow towels to fans entering the last game at Oracle Arena after 47 years that said “For OAK-LAND” with the K and D highlighted in white.

– Star guard Klay Thompson, who missed Game 3 with a left hamstring strain, suffered a torn left ACL during Game 6 with 2:22 remaining in the third quarter after coming down awkwardly following a dunk attempt. The five-time All-Star had 30 points and four made 3-pointers at the time of the injury.

“I saw it and I knew exactly what happened. I knew he f—ed up his leg. I saw exactly how he landed,” Cousins said before sighing. “[Injuries] were just happening so freakish. It was just déjà vu.”

– Forward Kevon Looney suffered a right first costal cartilage non-displaced fracture in Game 2. After initially being expected to be out for the rest of the playoffs following the injury, he missed Game 3 but returned to play through the pain in the final three games of the series.

– Andre Iguodala was dealing with a calf injury he suffered in the Western Conference finals.

– Cousins missed 14 games after suffering a left quadriceps tear in Game 2 of a first-round series against the Los Angeles Clippers. The four-time All-Star returned for Game 1 of the NBA Finals, but he certainly was far from 100%.

“Even though Golden State had some tough injuries the last game and this game, they showed how much heart they have, what it means to be a championship team,” Raptors center Marc Gasol said. “They didn’t make any excuses. They kept playing.”

Said Warriors guard Shaun Livingston: “We were dying out there, to be honest. It’s crazy. … Kevin. Klay. ‘Loon.’ Dray [Green]. No excuses. Give credit to Toronto. Toronto is a good team. But we respect ourselves. No question.”

Afterward, Warriors guard Stephen Curry sat at his locker appearing to be more pained about the team’s injuries than its three-peat hopes and days at Oracle Arena coming to an end. Most of his concern centered on the health of his fellow All-Stars Durant and Thompson.

“It’s not good. Klay and KD are two dudes who are supposed to be walking into the best summer of their lives,” Curry told The Undefeated. “It was taken away from them just like that. It’s tough. It is tough. Two really good dudes.”

Warriors general manager Bob Myers was teary-eyed when he talked about Durant’s injury after Game 5. He was also teary-eyed when talking about Thompson and the adversity the Warriors tried to overcome in the Finals. Myers told The Undefeated that his team could “only take so much” injurywise.

“I am lucky to be around these guys,” Myers said. “That is what it comes down to. The people part is my favorite part of the deal. They were great. You never know what’s going to happen either way. …

“I want every team to be healthy, but you just don’t know what’s going to happen on the other side of it. But we did what we could. We had one last game here. But [the Raptors] deserved it.”

What is amazing is somehow these aptly named Warriors were very close to pushing these Finals to a deciding Game 7 in Toronto on Sunday.

Forgotten was that Curry missed two full-court heaves that hit the rim at the end of the first and second quarters. Golden State missed nine free throws, including three in the fourth quarter. And with just eight seconds left and the Raptors up 111-110, Curry bobbled a pass on an out-of-bounds play and missed a 27-foot 3-pointer.

Curry had made a lot of game-winning and crucial shots at Oracle Arena, but not in the swan song.

“We almost won. We still had a chance to win,” Curry said. “I can shoot that 10 out of 10 times and make it. It was a pretty good play we had. A little bobble on the catch. Two dudes close out. It’s a make-or-miss league. It is what it is.”

Perhaps it was best for the Warriors to succumb to the Raptors in Game 6. If Golden State had made it to Game 7, two key starters would have been out in Toronto in Durant and Thompson. Several others, including Cousins, Iguodala, Curry, Draymond Green and Livingston, had injury concerns. After displaying the heart of a champion by winning a close Game 5 and nearly Game 6, the Warriors certainly would have suited up and fought with what they had. The relatively healthy and title-thirsty Raptors, however, would have been playing at home at Scotiabank Arena.

“Unbelievable. I’m so proud of our guys. Incredible effort,” Warriors part-owner Joe Lacob said. “Look, if Steph hits that shot, we’re going to a Game 7, maybe. And who knows what happens in a Game 7, even as banged up as we were. It was pretty substantial, obviously.

“Their heart is amazing. They all should be very proud, shouldn’t be upset. Toronto is a very good team.”

Said Cousins on playing in a possible Game 7: “Oh, my God. It would have been tough.”

The Warriors have been to the Finals in each of the past five years, but the future is in question because of injuries and free agency. Durant and Thompson are expected to be two of the NBA’s elite free agents this summer, with max contract interest despite the injuries. Livingston said he “possibly” could return next season but is strongly considering retiring. Cousins, Looney, guard Quinn Cook, forward Jordan Bell and forward Jonas Jerebko are free agents too.

“We can sit here and say, ‘Well, if this hadn’t happened or that hadn’t happened.’ … It doesn’t matter,” Warriors head coach Steve Kerr said. “What matters is Kevin is going to miss next season with an Achilles tear and Klay suffered a knee injury. … But it’s just brutal. It’s just brutal what these guys have had to deal with and what they’re dealing with right now.”

The injury-plagued 2018-19 Warriors fell shy of expectations of winning an NBA title. Golden State also lost all three of its last games at Oracle Arena during the Finals. But with the grit and fight that the Warriors showed, the city of Oakland should forever be proud of their final days here.

“Everything this team has been through, I’m extremely proud of these guys,” Green said. “The way we fought, it was great. But we lost.”