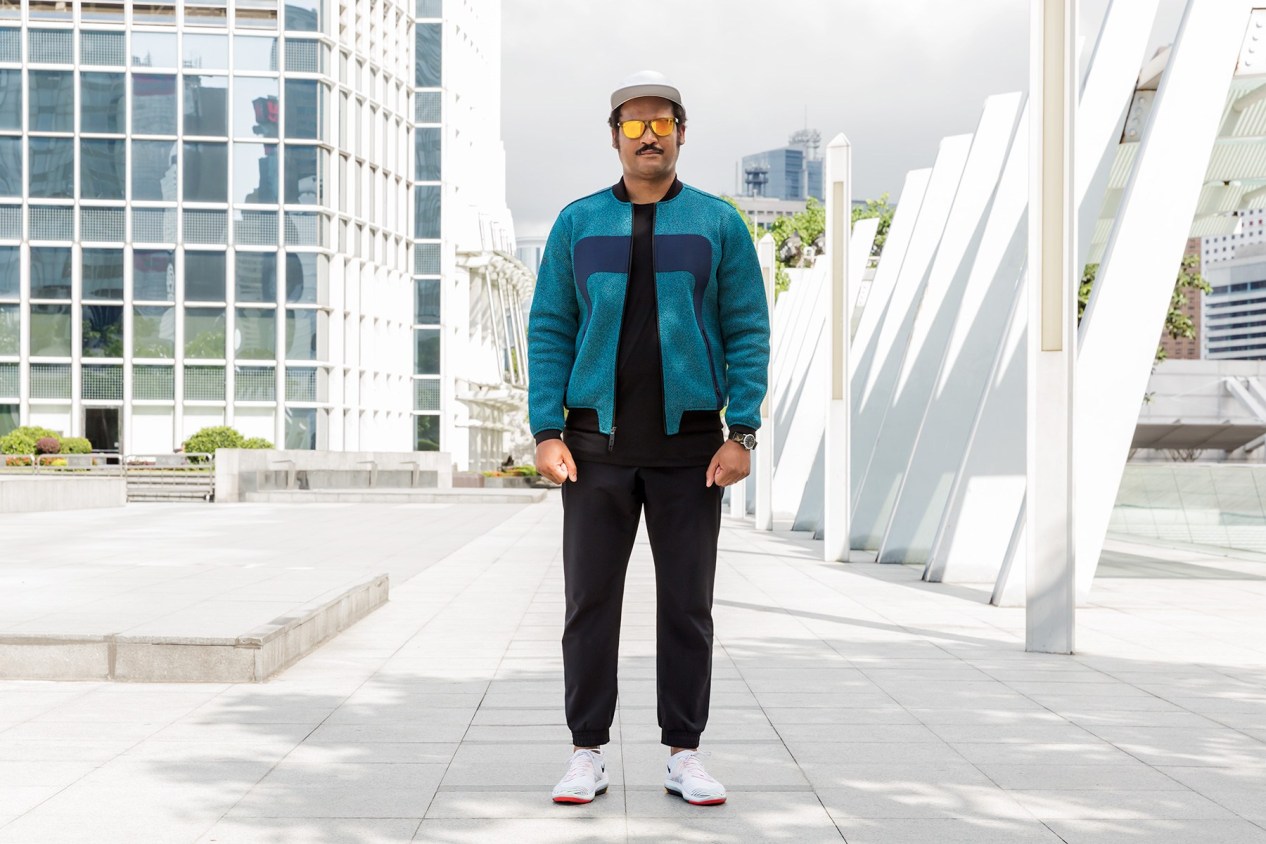 The guy behind the guy

Chris Bevans is the go-to design icon behind some of the world’s biggest athletic apparel brands — How come no one has ever heard of him?

The first face to face came in a huge banquet hall in the JW Marriott in Washington, D.C. Two legends — one a soft-spoken fashion guy, the other a reclusive “straight outta Oakland, California” sports god — agreed to meet before the Seattle Seahawks’ away game against the Washington Redskins.

It was a brisk October day in 2014, and Marshawn Lynch, who was still the Seahawks’ explosive and controversial running back, had agreed to meet Chris Bevans, the freelance designer who is a current Nike consultant, to discuss taking Lynch’s Beast Mode brand to the next level.

Bevans and his business partner, Mitch Grossbach, president of MJGFashion, the New York-based fashion brand-building company, took a meeting with Lynch to suss out and fine-tune the million little creative details that were somewhere in the player’s brain. Grossbach recalled the meeting this way:

“So, Chris starts asking Marshawn questions, ‘So, tell me what colors do you respond to? When you go to dinner, what you like to wear? What length sleeve do you like? When you work out, how do you like your pants to fit?’ Chris shows him pictures on the laptop — he’s always really prepared for these kinds of meetings — and he’s showing jackets and coats, everything. And all the while, he was honing in on Marshawn’s taste.

“Athletes and stars have a lot of style sometimes, but they’re helped by stylists a lot. Or maybe they can’t articulate it in a way to build a brand around it. Chris didn’t try to impose his likes and dislikes on Marshawn; he’s more like an architect asking a client what they want in a custom-built house. He’s asking questions and paying attention to the answers. ‘Do you like your jackets like this? Pharrell likes to wear his jackets just a bit over-sized.’ Chris really has such credibility because the people who have worked with him previously are huge names: Puffy [Sean Combs], LeBron [James], John Legend, Roger Federer. The list goes on and on. He has a certain manner that’s very gentle and humble, and he very quickly became a real design partner with Marshawn.”

The banquet hall gods must have been happy with the meeting. Beast Mode apparel was really born that day. 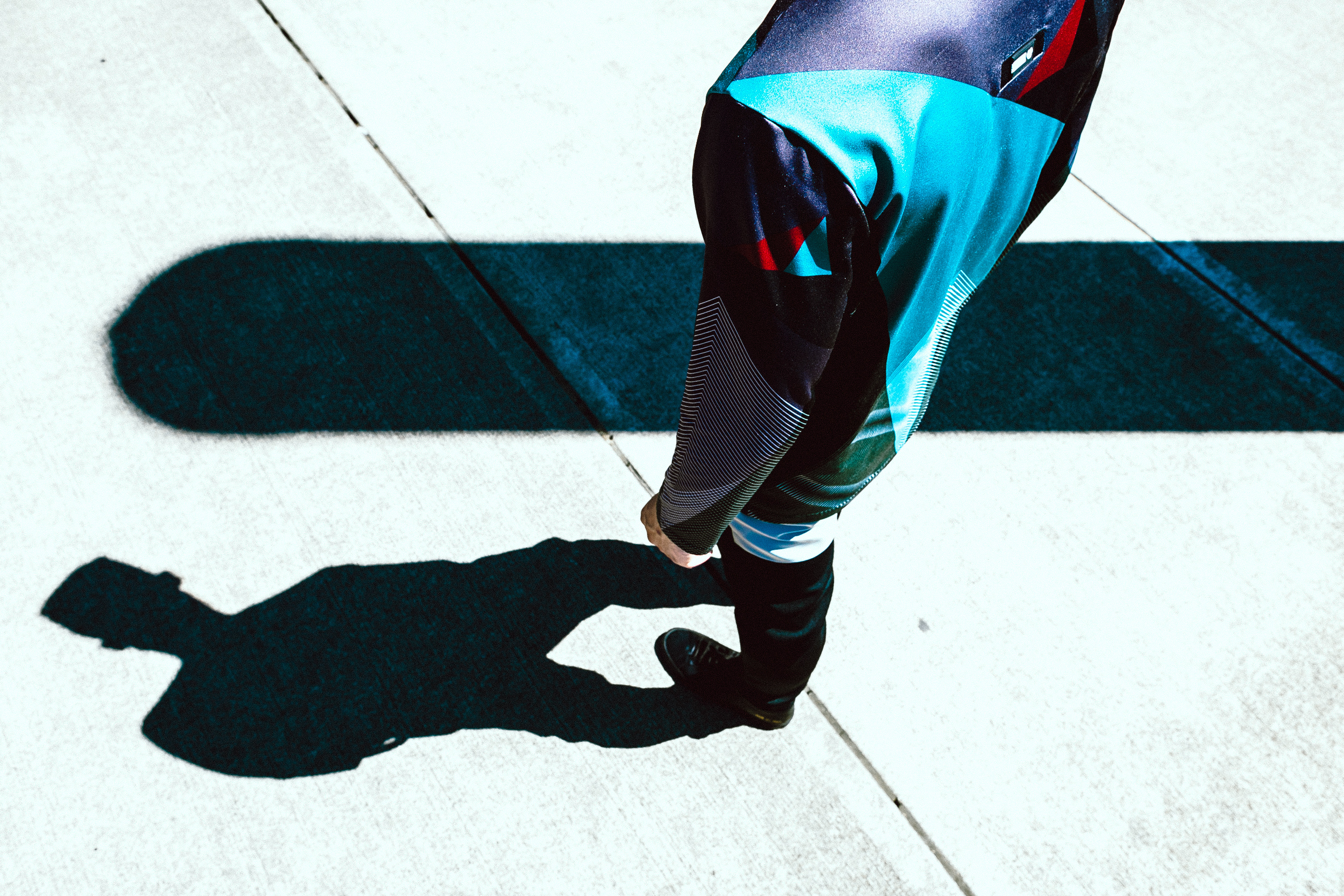 “Marshawn is such an entity unto himself,” Bevans said. “It’s exciting to work with him because he’s incredibly open and honest about what he doesn’t want. As long as you keep him in the loop, he’s very appreciative about what you bring to the table.

“It’s great to see him in his element in that Beast Mode universe in the store,” he continued. “He’s so faithful to Oakland and his fan base in Seattle. He has fans all around the world that continue to be interested in his story.

“Everyone has their own Beast Mode story, whether it’s Instagram moms who are really into working out hard or meatheads or skaters. We all have to get in — and stay in — Beast Mode to make things happen.”

On a recent sweltering afternoon, Bevans sits at an industrial-looking table in the The News showroom in Manhattan, New York, that he uses as the East Coast home for his high-tech menswear company, DYNE. Three long racks of colorful samples from the spring 2017 collection hang behind him. He’s in another meeting, this time with another set of business partners, both of whom have recently returned from the company’s gated factory two hours south of Hong Kong. Bevans asks for opinions about the technical challenges of bonding eco-friendly performance textiles on their state-of-the-art machines.

Outside of Asia, DYNE is available online and has a cult following among hardcore athletes who admire modern details like weather resistance and near-field connectivity. If Nike and Adidas are the Audi sedans of sports apparel brands, DYNE is a Mercedes Benz G-Class SUV: sleek, expensive, tough and cooler-than-you stylish.

The clothes are also fully immersed in wearable (and washable) technology. Jackets, coats and pullovers are all embedded with near-field communication chips, which wearers can scan with a smartphone to take them to a platform that explains everything about the DYNE brand, right down to the music playing in the showroom. DYNE is available online and in specialty outlets such as the luxury department store Lane Crawford in Hong Kong and other cities in China, and Isetan Men’s in Tokyo, where it is sold alongside elite collections like Adidas Y-3, NikeLab, Alexander Wang, adidas Originals White Mountaineering and Acronym.

But the 2-year-old DYNE is only one of the journeyman designer’s many, many gigs (“I’m half-Jamaican so I have plenty job, gal,” Bevans said to a reporter.) — many of which are headed by some of the brightest names in U.S. professional sports. Bevans, who is married and has a daughter, also oversees the creative and design direction of several other apparel companies — many of which have big names, big money and (one assumes) very big egos attached to their brands.

Bevans is the rare brother in the world of fashion who is broad-gauged like no other. His experience ranges from billion-dollar corporate design rooms at Nike to scrappy urban upstart brands and ghost designing for athletes, retired and current. He is the consummate multitasker whose particular set of skills aren’t restricted to styling clothes for photo shoots and celebrities’ public appearances. 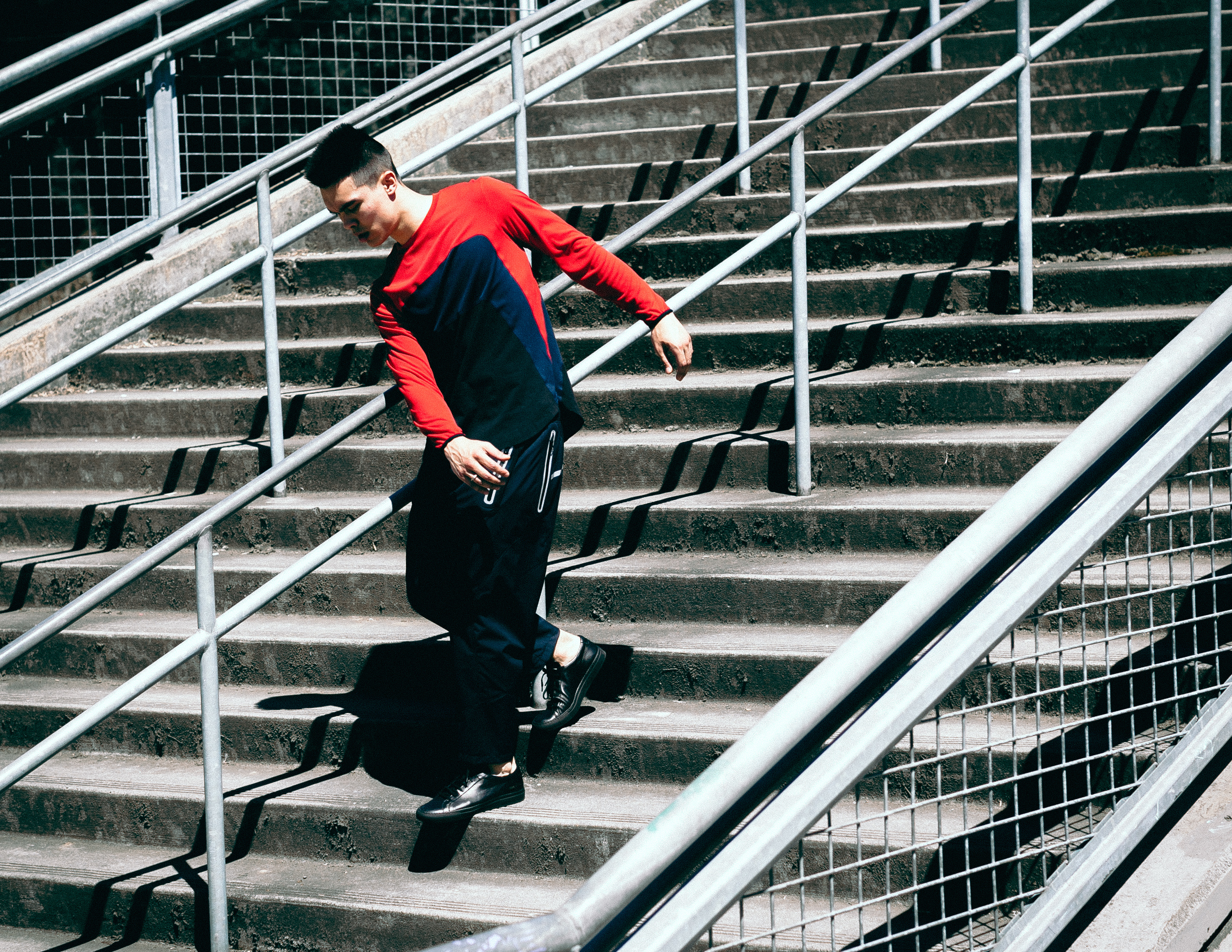 Ten good minutes spent with Bevans, and it’s pretty obvious why megastars such as Lynch, Dallas Cowboys running back Ezekiel Elliott, Philadelphia Eagles safety Malcolm Jenkins, and artists Kanye West and A$AP Rocky are drawn to the 43-year-old design icon. Bevans knows corporate America, the connected worlds of international sports, fashion and entertainment, and how to harness the power of social media to push a brand toward its fullest potential. “Any brand would be blessed to be able to get someone like Chris,” Grossbach said. “He’s arguably one of the best designers in the world in this performance wear space. Companies such as Nike, Adidas and Under Armour are keeping an eye on DYNE and pursue him all the time.

“Chris is one of the most talented guys in the design world because he knows how to translate someone’s point of view into something tangible and have it be an authentic expression,” Grossbach continued. “I spend a lot of time working with high fashion designers, and they are very good at conceiving a collection and having it walk down the runway. But that’s a very different thing than translating ideas into a brand. He’s a tremendous listener, which most fashion designers are not. They are great at listening to themselves; they’re not necessarily interesting in collaborating with others.”

In an era when fashion designers need to be nimble, Bevans has the journeyman work experience that makes him easy to place. DYNE is a niche business that appeals to the avant-garde cognoscenti who appreciate tech-performance gear. Cutting edge designers Rick Owens and Dao-Yi Chow and Maxwell Osbourne of Public School have the same rare-air approach to fashion design that transcends typical streetwear. “Every athlete, entertainer and design house wants him, even though he’s too humble to tell you that himself,” Grossbach said.

And there are still more side projects: He’s an alum of the Director’s Fellow program at the prestigious MIT Media Lab in Cambridge, Massachusetts, where he is active fellow under Joi Ito in the areas of wearable technologies and fabrics; he’s creative director for Everybody Fights, a cross fit-style boxing gym in the Boston area (started by boxer-turned-businessman George “Monk” Foreman III and Anthony Rich) and design director for Spiritual Gangster, a yoga apparel company based in Irvine, California.

In an era when fashion designers need to be nimble, Bevans knows how to translate his — and someone else’s — point of view into a tangible brand. Bevans’ family moved from Brooklyn to Rochester, New York, when he was in elementary school. His mother is Jamaican, and his father, who worked for Kodak, is from Belize. Bevans learned to run a sewing machine and cut patterns from his seamstress grandmother and attended the Fashion Institute of Technology (FIT) in New York after working as an apprentice tailor in high school. His core business early on was making bespoke suits for performers like John Legend, Daryl Hall and The Roots.

Bevans moved to Portland, Oregon, to work for Nike, where he was design director for Global Urban Apparel and helped conceive tennis star Roger Federer’s “RF” tennis logo, worked on NBA star LeBron James’ earliest collections and lead the 25th anniversary of Nike’s Air Force 1 campaign. “I’m not sure if [Nike] realized who they’d actually hired because I don’t dress ‘urban’ at all,” Bevans said with a laugh. “I got in there and they were like, ‘Maybe he’s not urban enough.’ But the timing was right because we were looking to do something that was completely different from what people think streetwear apparel is. 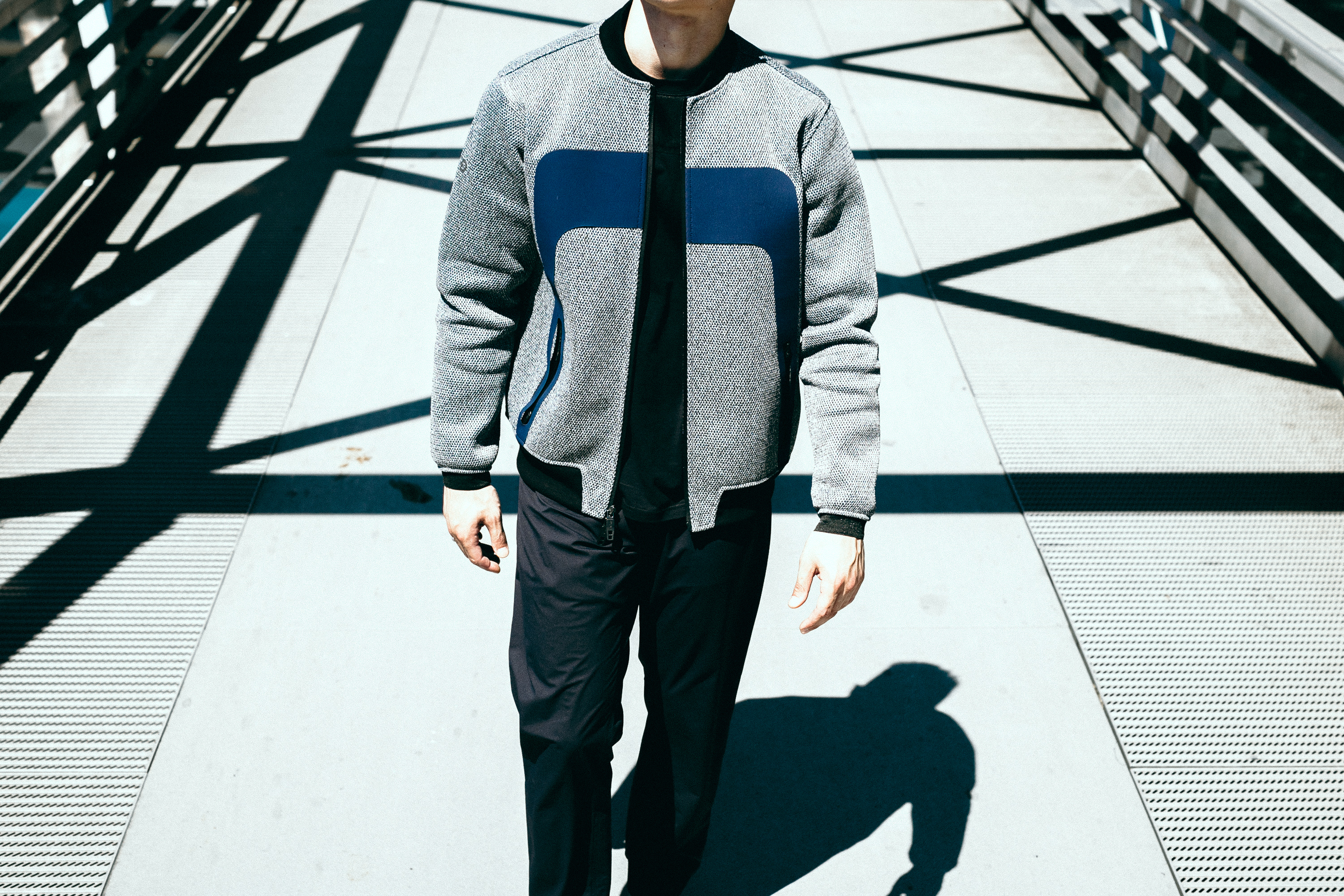 “ ‘Urban’ means nothing, anyway,” he added. “We all know white kids in the suburbs who know more rap lyrics than any black kid who lives in the city. And I’m not listening to rap music all day.” After his stint at Nike (where he is still a consultant), Bevans could take his pick of any design gig he wanted. He worked for Sean John, Billionaire Boys Club and Ice Cream apparel, Head Tennis and Marc Ecko.

Bevans exudes a macho yet nice guy vibe, and displays none of the fashion-y extraness of many high-end designers. He is an avid watcher and player of sports, especially soccer and tennis, the game which spawned his first star crush, the late Arthur Ashe.

“I just love his persona, him being a black man in a white man’s game,” Bevans said. “His style of play was so graceful and off the court. He didn’t shy away from talking about difficult social issues of the time, and it just made me fall in love with that person.”

There are some designers who are just keeping their head focused on their own brand, but Grossbach said that’s not stimulating enough for Bevans. “DYNE is elegant and chic and high performance and technical and beautifully done, but I think he’d get restless if he only did that one thing,” he said. “But if DYNE didn’t work, which would really surprise me, he’d have more opportunities than he’d know what to do with.”