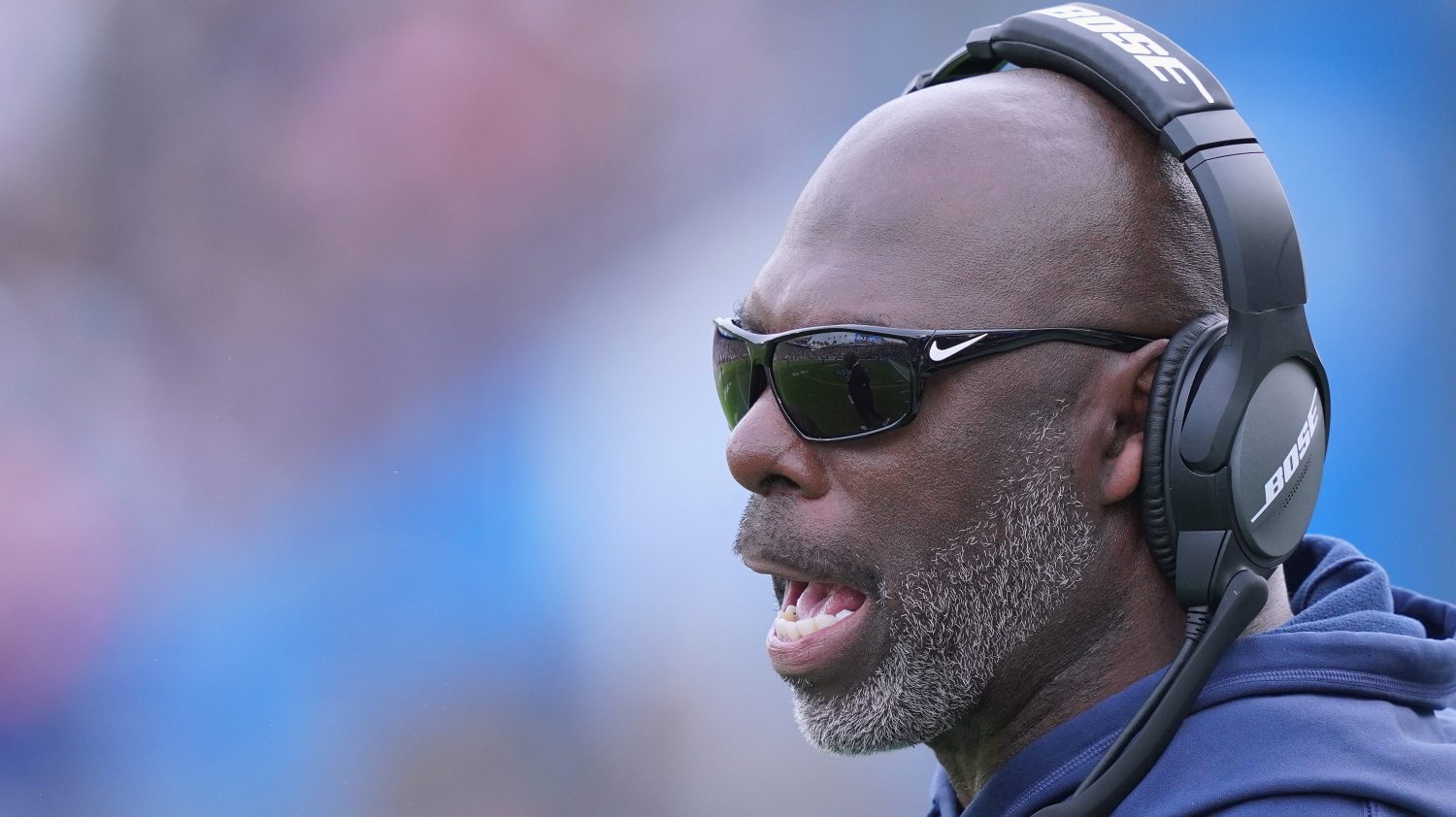 Head coach Anthony Lynn of the Los Angeles Chargers on the sidelines during a game against the Cincinnati Bengals at StubHub Center in Carson, California, on Dec. 9. Harry How/Getty Images
NFL

The importance of Anthony Lynn’s rise as Chargers head coach

Will more African-American assistants get a chance to run their own shops?

CARSON, California – Anthony Lynn could have lost confidence after being passed over for the Miami Dolphins’ head-coaching job in 2016. After all, it’s never easy to be rejected.

But the then-Buffalo Bills assistant remained on the grind, believing he had the coaching chops to successfully lead a team. “And when the opportunity came,” Lynn told The Undefeated, “I knew I would be ready.”

In only two seasons, the Chargers’ forthright leader has directed an inspiring turnaround, producing consecutive winning records and the franchise’s first playoff berth in five seasons. For his efforts, Lynn is among the leading candidates for NFL Coach of the Year. And to hear Lynn tell it, his performance provides yet additional evidence to reinforce something much more significant than one person’s individual accomplishments.

“There are a lot of other [African-American coaches] out there who would be great head coaches,” Lynn said. “But it’s really still all about getting someone to give you that first opportunity to show what you can do.”

An important question will be revisited once the next head coach hiring cycle begins next week: Will owners give more minority assistants the chance to run their own shops? For black coaches, Lynn’s ascent in Los Angeles could effect positive change.

His body of work has provided a textbook example of getting it right with the Rooney Rule, which mandates that an NFL team must interview at least one minority candidate for head coach and general manager openings. In a copycat league in which the franchises at the bottom eagerly follow those at the top, the Chargers are suddenly en vogue because of Lynn. On the other hand, even after Super Bowl victories by Tony Dungy and Mike Tomlin, the two African-American head coaches to win NFL championships, the 32-team league has never had as many as nine minority head coaches in any given season. What’s more, the NFL has suffered major blows to its diversity efforts the past two seasons, with more hits likely to come amid expected firings after the regular season ends Sunday. And at this point, black assistants are no longer just satisfied with getting a foot in the door, many of them said. They want a fair shot at being considered for the best jobs that will help them stay in the game.

Lynn was part of the same rookie head-coaching class that included Vance Joseph of the Denver Broncos, whose time with that organization figures to end very soon. It also appears that New York Jets head coach Todd Bowles is on his way out. Marvin Lewis of the Cincinnati Bengals, the longest-tenured African-American head coach in NFL history, reportedly will leave his position at the end of the season. Lewis, who signed a two-year extension in January, may land in the team’s front office. Although Steve Wilks of the Arizona Cardinals is only in his first season, the team is an NFL-worst 3-12 and he reportedly will be fired.

When the 2018 season kicked off, the NFL had eight head coaches of color, matching 2011 and 2017 as the most the league has had in any season, including seven African-Americans. Currently, there are seven minority head coaches, six African-Americans among them (in October, the Cleveland Browns fired Hue Jackson).

Because of how head coaches are often picked these days, white assistants are in a much stronger position to move up than their minority counterparts.

The league is all-in on offense, which excites fans and helps drive television ratings, so owners prefer to fill top openings on that side of the ball — the side that’s mostly white at the top-tier assistant positions. In fact, Eric M. Bieniemy of the Kansas City Chiefs and Byron Leftwich of the Cardinals are the game’s only black offensive coordinators. Leftwich began the season as the team’s quarterbacks coach and was promoted in October when former Cardinals OC Mike McCoy was let go. The overwhelming majority of the league’s players are black.

Commissioner Roger Goodell has acknowledged that a bigger pool of candidates of color on offense is needed. There’s also the fact that being a coordinator is an unofficial prerequisite to becoming a head coach. Again, white coordinators largely outnumber black coordinators. Rethinking their approach to hiring could help owners help their teams, Lynn said.

“For years, the criteria on how we pick head coaches in this league has blocked certain guys from getting a chance, which is just a fact,” said Lynn, who’s 20-11 overall. “So many times, they [owners] are only picking from guys who are associated with the quarterback, and a lot of those guys are white coaches.

“If you don’t have African-American coaches in those coordinator positions, you’re going to have more white coaches than black coaches [being hired as head coaches] by a landslide. What has to change is that they [owners] need to not be locked in on offense and coordinators and look more at everything a guy brings.”

To his point, Lynn was a longtime running backs coach. Although he also was an offensive coordinator, Lynn said, “Nothing I did in that job changed my mind about the fact that you don’t need to call plays to be a head coach.”

A long-running complaint of many black assistants is that, under the terms of the Rooney Rule, they often feel compelled to interview for head-coaching openings they’re unlikely to be hired to fill. The fact is, no professional league is more gossipy than the NFL. Even before ousted coaches clean out their desks, word spreads about who tops the lists to replace them. Black assistants often feel they’re being used to satisfy the letter of the rule but not the spirit of the rule. The NFL has acknowledged that the rule needs to be strengthened and has moved to make changes it hopes will address holes in the interview process.

The impact of the rule changes will be evaluated over time. In the meantime, John Wooten, chairman of the Fritz Pollard Alliance, which helps oversee compliance of the rule, strongly believes black assistants should interview if called.

Wooten said black assistants must be on the interview circuit to be part of the head-coaching discussion. Many years ago, that’s what Wooten told Lynn, who once had the opportunity to interview with the Jets when he was a highly regarded young assistant.

“He didn’t want to take the interview because he didn’t think he’d get the job,” Wooten recalled. “I said, ‘Are you kidding me? You have to know what the interview process is about. What better way can you find out what something is about than going out there and doing it?’ I told him he needed to do it, and he did.

“We discussed his performance. We talked about different things he could do to help him in future interviews. It’s a learning process. It’s not [perfect], but you take it and let it help you get what you want.”

What black assistants want most is to be hired into head-coaching positions in which they truly have the chance to succeed. There are some franchises that are so poorly run, the leaguewide perception is they will never win consistently. When openings arise, white assistants who are considered hot head-coaching candidates can be somewhat choosy. Many black assistants said they don’t have that luxury because they are offered so few positions.

Within the game, it’s universally accepted that the presence of a top-notch quarterback on a team is the No. 1 factor in determining its future success. Lynn inherited future Hall of Famer Philip Rivers. Quickly, they established a strong working relationship that has produced a productive partnership. Upon that foundation, Lynn rebuilt the Chargers’ culture. It’s a sound formula for head-coaching longevity, Wooten said.

“You and I both know how important it is for a head coach to not only have that quarterback but to be on the same page with that quarterback, and what makes me so happy is that Anthony and [Rivers] are working so well together,” Wooten said. “Anthony has shown he’s a high-character guy, he’s very intelligent, he’s well-organized and he has a great football mind. And I’m not surprised by anything Anthony has done. I always knew he was capable. Just like I know there are a lot of other guys who are capable.”

There’s no doubt Wooten made the correct call on Lynn. Now, Wooten hopes owners will soon give him many more opportunities to prove he’s right.