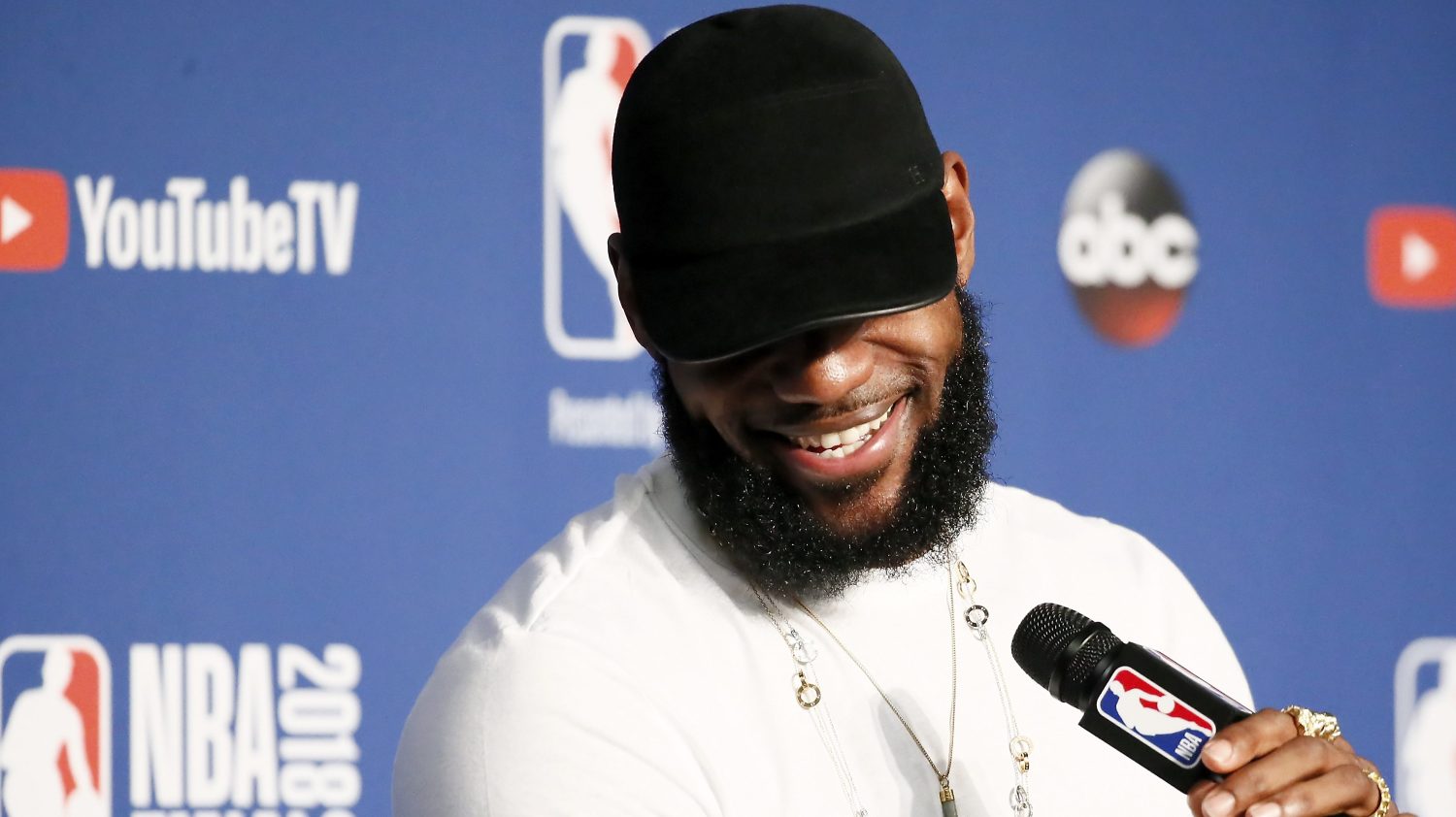 LeBron James talks to the media after being defeated by the Golden State Warriors. Chris Elise/NBAE via Getty Images
NBA Free Agency

Hope you enjoyed the chaos, because it’s probably the King’s final one

Unlike in 2010 and 2014, when LeBron’s free agency was either made into spectacle or announced via The Love Letter That Saved Cleveland, James just exploded the sports world by somewhat quietly signing a four-year, $154 million deal with the Los Angeles Lakers. The news was confirmed via a Klutch Sports Group press release.

As rumors of deals with Kawhi Leonard and/or DeMarcus Cousins abound in Tinseltown, the Lakers have begun filling out their roster, re-signing fellow Klutch client Kentavious Caldwell-Pope and adding the Warriors’ JaVale McGee and longtime LeBron pest Lance Stephenson. But amid the Lakers’ activity and the leaguewide chaos, James’ announcement has the feel of him in a familiar situation but with different factors at play — most notably family comfort and life after basketball in a town best suited for his post-basketball long-range game. We hope you enjoyed the drama of the past few weeks. Because we said post-basketball. This is likely the last time we’ll witness the insanity of a LeBron-led free-agency period. Ever.

The draft did prove to be a tasty appetizer to formal free agency, though. There was a cocktail of trades headlined by Luka Doncic and Trae Young swapping locations in Dallas and Atlanta. There was the Michael Porter Jr. saga and some custom draft suits that only a mother could love. But the NBA draft, even as it develops into more of a fashion show each year, is not free agency. And nothing in sports is free agency with LeBron top of the bill. Not Chris Paul in all of his intensity. Not questions about Kyrie Irving. Nothing.

Over the weekend, aside from the LeBron earthquake, several deals came to fruition. Kevin Durant cashed out in the Bay Area. Paul George is staying in Oklahoma City and was partying with Nas in celebration. Chris Paul re-upping due to “unfinished business,” while Trevor Ariza heads to the desert to be Devin Booker and DeAndre Ayton’s old head. Nikola Jokic and the Denver Nuggets agreed to $148 million over the next half-decade. DeAndre Jordan finally signed with the Mavericks. Yep. The NBA offseason is the league’s version of a reality show. Or The Hunger Games, if you’re into that. There are so many story lines:

What does George’s move mean for the Lakers?

So what’s the deal with DeMarcus Cousins?

So what’s the deal with Kawhi Leonard?

Wait. So Trevor Ariza signed a one-year deal with Phoenix? Can they really pull off a trade for Kemba Walker and put him beside Devin Booker, Ariza and DeAndre Ayton? I’d watch that.

Will Dwight Howard be the Warriors’ latest (and greatest — as in Hall of Fame-caliber) reclamation project?

Really, all these moves are great. But keep it a buck. Has anyone really done anything to threaten the Warriors next season?

And now of course the question is will the Lakers get pulled up like Katniss from the burning arena by LeBron? Because with him, it’s fresh out the frying pan into the fire.

And as far as the critics, tell me I don’t get it/ Everybody can tell you how to do it, they never did it …

Throwback: The landscape changed on July 8, 2010, when James announced his move to South Beach. “The Decision” was derided, celebrated with “The Probate,” given the “We Are The World” treatment, critiqued by NBA royalty and championed in rap lyrics. Love it or hate it, the cultural capital that James’ The Decision created for the NBA is undeniable.

The NFL is embroiled in debates and controversies, and has been for years, leaving many in a moral dilemma as to whether to watch the product altogether. Major League Baseball suffers from the exact opposite of what the NBA thrives on: a surplus of stars who are household names. And while the best thing MLB has going for it are its usually intriguing playoffs, pro baseball’s regular season starts at the tail end of the NBA’s regular season, and the entirety of its playoffs battle the start of pro and NCAA training camps, World Cup (this summer) and the Olympics (every four years). Meanwhile, the NBA offseason is bigger than its own actual summer league.

Everyone asking me if I really jumped earlier from my story early on today, well here you go! Haters will say it’s fake(videoshopped). 🤣🤣🤷🏾‍♂️. P.S excuse my language but it’s Still #BlackExcellence✊🏾 #JamesGang👑

True: Before 2010, NBA free agency was a big deal. Players left one team and signed with another team. Teams traded players. There were even landmark summers — the Lakers landed Shaquille O’Neal and Kobe Bryant in 1996. Steve Nash reluctantly signed with Phoenix in 2004. But the summer of 2010, which kicked off with Amar’e Stoudemire going to the Knicks and ended with James beginning his 305 era, ushered in an unprecedented amount of money, power, respect (and fear) of players and their relationships with each other. Nothing was the same. LeBron James televised the revolution.

Money, power, respect / What you need in life … you’ll be eatin’ right … help you sleep at night / You’ll see the light/ It’s the key to life.

Every offseason since 2010 has been its own show. The rise of social media (Twitter launched in 2006, Instagram in 2010) and a constantly swelling news cycle has magnified the magnitude of the moments that collective bargaining agreements made possible. But the drama, debates and hearsay of NBA free agency play out in real life as well.

Go to the barbershop, it’s there. Everyone at every shop knows where every player is going. And every person in the shop is a salary cap expert as well. Hit the gym — most have treadmills with TV screens and rows of screens hanging from ceilings. All-day sports talk is likely being broadcast, so free agency is there too. Hit any indoor or outdoor basketball court in America and only two conversations matter — who has next and where LeBron is next. Hit happy hour, it’s there too. My mom texted me the Friday morning before his announcement, and even before saying hello she was like, “So where is LeBron going?”

James posted an Instagram story of him listening to Jay Rock and J. Cole’s 2018 “OSOM.” The acronym for “outta sight, outta mind.”

The season beyond the season can be more captivating than the NBA’s actual regular season. And it’s about more than just the stars of the league. Moves really do affect narratives.

For example, shooting guard Will Barton re-signing with the Denver Nuggets for $53 million over four years might not seem like a big deal. And, true, it doesn’t mean the Nuggets are going to knock off the Golden State Warriors for Western Conference supremacy next season. But Barton had the best year of his career last season. That fact, plus center Nikola Jokic’s new $148 million contract, Michael Porter Jr.’s arrival, the versatility of two-guard Jamal Murray and the fact the Nuggets missed the playoffs each of the past two seasons by a single game, means there’s reason for excitement in the Mile High City. Pun absolutely intended.

Why would the NBA ever want the cultural relevance of the NBA offseason to fall back? Discussions of 2019 have already begun about Durant’s two-year deal with an opt-out option for next summer. The two-time Finals MVP is expected to headline next year’s crop of franchise-altering talent: Irving will be in play, along with Klay Thompson, Kemba Walker and Jimmy Butler. Leonard, too, depending on how this summer pans out. The NBA is a yearlong soap opera right now.

As Drake would say, nothing was the same. LeBron James televised the revolution.

A LeBron-less NBA free agency period won’t be the same. But none of this is going to become more docile. Not next summer. And certainly not even the rest of this summer. And even if he’s not central, he’ll kind of always be central. Never forget: He’s the man who, in 2010, helped shepherd in the current age of player empowerment. The man who, by proxy, helped create these current Warriors. And the man who continues to search for the infinity stones to beat them.

It’s his power. The weight of his presence. LeBron is his own high-pressure, high-intensity ecosystem. There’s always a sense of energy around him. Whether it’s the eternal debate about him and Michael Jordan, or the “help” around him. He’s always relevant, and it’s been that way since he torched Lenny Cooke, then the No. 1 player in the country, at New Jersey’s 2001 ABCD Camp. Seventeen summers later, James is still top-billing.

Last week, James was vacationing on the eastern Caribbean island of Anguilla, which soon became known as the “Decision Cave.” James posted an Instagram story of him listening to Jay Rock and J. Cole’s 2018 collaboration “OSOM.” The acronym for “outta sight, outta mind.” Exactly what James was, but wasn’t.

In June, at the draft, when the Cavs went for Alabama point guard Collin Sexton, Sexton’s college coach, Avery Johnson, gave a video sales pitch to LeBron. James remained radio silent. Then there was the news that James was opting out. James remained out of sight. He did appear (with his back to the camera) on Instagram walking the beach with his daughter, Zhuri. And then jumping off a cliff. But he was never far from the NBA’s collective mindstate.

This could be the last “Decision,” of this magnitude, of James’ career as a professional player. By the time this contract ends, James will be almost 38. To some he’s still the lanky kid from St. Vincent-St. Mary. Or the young OG who showed up to Rucker Park with Jay-Z for that infamous 2003 summer game. He’s as superhuman as anyone the game has seen since the days of Wilt Chamberlain. Or the phenom who buried Detroit in 2007, or suffered unparalleled embarrassment in 2011 versus the Mavericks. Or the prodigal son who returned home and delivered on a promise.

Yet there will come a day when LeBron, the greatest player in the world and perhaps of all time, will have his talents spoken of in the past tense. His talent has been a national discussion since he was three years older than his oldest son is now. Outta sight, outta mind, Jay Rock and SiR harmonize on James’ Instagram story from his Anguillan escape. Feelin’ like, I’m runnin’ out of time.

Appreciate the chaos of this moment. Appreciate every moment of James’ forthcoming Lakers era. Because all of it is history. We’ll speak of these decisions for years, decades to come. We’ll speak of this era of basketball and player empowerment, led by James, with the same passion we have when we speak of the ‘80s era and the era before that. There is no offseason equivalent in all of sports than a LeBron James-led free agency. And if this was the last rodeo, James stayed 10 toes down to the blueprint of his life’s story: He’ll shock the world every single time if given the chance. LeBron James is a Los Angeles Laker. Let that marinate. That’s not love. That’s not hate. That just is.