After a year of anti-racism protests, the San Jose Earthquakes forward believes there’s still work to be done

Last spring, exactly a week after the murder of George Floyd by Minneapolis police officer Derek Chauvin, Major League Soccer player Jeremy Ebobisse wrote in a Medium post that, in the face of yet another example of police brutality against African Americans, he wanted white Americans to feel as angry and agitated as he does; he wanted white people to feel uncomfortable.

The then-Portland Timbers forward would go on to call racism in this country a “plague on the white community” that can only be cured by white Americans taking an initiative in anti-racism work, which included “decolonizing your minds” and actually listening to Black people. (Ebobisse was traded to the San Jose Earthquakes on Aug. 5.)

But after a year of protests, continued police violence, promises from politicians, and a presidential election in November that was meant to signal a new direction for the country as it pertained to race but instead led to the insurrection at the U.S. Capitol in January, Ebobisse was proven correct in that as long as the majority in this country feel comfortable with the status quo, change is hard to come by.

Anti-racism activists asked for police reform or defunding, to improve working and living conditions for Black people and other people of color, and an overhaul of a criminal justice system that disproportionately targets and criminalizes Black people. Instead, they received calls for more police funding, less access to voting, and a brewing culture war about how history is taught in public schools.

“Now we’re arguing about critical race theory,” he said, referring to the decades-old legal academic concept that posits that racism is embedded in every U.S. institution. “When the people arguing against it don’t even know what it really is.”

The last year has been both what Ebobisse expected post-George Floyd America to be, but also an exercise in gaining tangible results through coordinated organizing and activism. 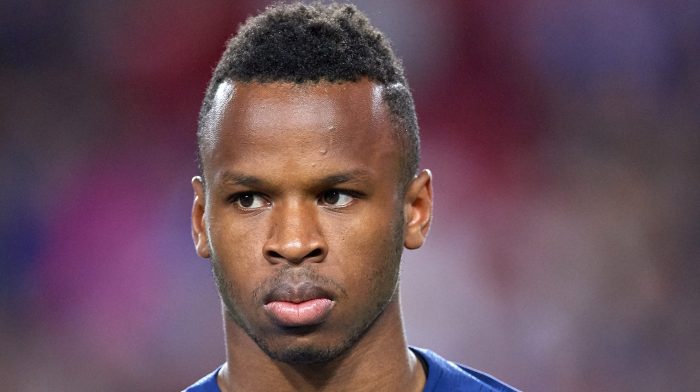 In June 2020, MLS announced that the league would return from a five-month hiatus due to the coronavirus pandemic to play a six-week tournament at the Walt Disney World properties. While at the resort, Black Players For Change (BPC), a player-led organization that advocates for racial equity in both soccer and American society, organized an on-field demonstration ahead of the first match of the MLS is Back Tournament between Inter Miami CF and Orlando City SC to keep attention focused on anti-Black racism.

While every available Black player in the league was a part of the demonstration, there was concern among the BPC members, much like with their counterparts in the NBA, that participating in the tournament would distract from the work of the protesters who were in the streets risking violence and arrest. But in the end, the group figured that leveraging its platform in the MLS bubble was the most powerful and impactful action it could take.

“It really skyrocketed our trajectory,” Ebobisse said of playing during the protests. “Whereas had some of the Black players not gone into the bubble, or had Black Players For Change – as an organization, as a nonprofit – decided, ‘We’re not going into the bubble,’ I don’t think we would have gotten that attention, and I don’t think we would have been able to leverage the partners that we would come to meet and work with after that.”

When Ebobisse wasn’t consumed with organizing for BPC, which he said consisted of endless Zoom meetings, phone calls and text messages with the group’s partners and constituents, there was the matter of playing soccer. After a group stage and knockout round, the Timbers defeated Orlando City 2-1 to win the MLS is Back Tournament trophy, which automatically qualified the Timbers for the 2021 CONCACAF Champions League and a $300,000 prize.

Ebobisse credited his team’s success in the tournament to having been in similar unfamiliar situations in the past, such as the six weeks the Timbers spent in Costa Rica in early 2020 due to their stadium in Portland, Oregon, not being ready yet. He also relishes the fact that the Timbers are likely the first and last bubble champions.

“There’s always a reason to discount a championship,” he said. “While we recognize that the MLS is Back bubble tournament is not MLS Cup, or it’s not MLS Cup as it’s been in the past, or the Supporters’ Shield, it is a special tournament, one in which we hope never to see again. So, that’s our piece of history.”

Within 24 hours of the Timbers’ victory, the regular season resumed in the teams’ markets, culminating in Columbus Crew winning the MLS Cup in December.

Through the bubble tournament, the remaining 2020 season, and the beginning of the 2021 season in April, Ebobisse and BPC have been working to put substance behind all of their statements and demonstrations from last summer, the exact actions Ebobisse stressed for white Americans.

The Black Players Coalition set out two umbrella goals to fixing soccer’s – and by extension America’s – problems when it comes to race: youth accessibility and representation in MLS.

Whether because of finances or racial acceptance, African American youth participation lags way behind that of white Americans. For representation, while MLS tops all other male American sports in percentage of people of color who work in the league office (41.6%), Black people make up just 6.6% of all MLS league office employees, according to The Institute for Diversity and Ethics in Sport at the University of Central Florida.

Over the last 12-plus months, BPC partnered with LeBron James’ More Than a Vote initiative to increase Black youth participation in November’s presidential election; launched the Blackout Collection customized kit line, donating proceeds to FC Harlem, a youth soccer development organization in Harlem, New York; and built mini-pitches across the country to both provide access to playing areas for, and to engage with, young Black kids.

Greater diversity in MLS and team front offices is more of a long-term initiative, but Ebobisse said Black players now have a “relevant seat at the table” when it comes to diversity and growth-of-league concerns, including the establishment of a league diversity committee in October 2020.

“The formation of our group showed the league early on that we were loud, we were educated and we were going to make sure they were on board with us,” he said.

For his work, Ebobisse was individually nominated as a finalist for the MLS WORKS Humanitarian of the Year Award, given each season for exemplary community service work, along with Los Angeles FC midfielder Mark-Anthony Kaye and Toronto FC defender Justin Morrow. But the MLS ended up giving the award to all 170-plus members of BPC. Ebobisse and others agree with the decision to not single out one player for the honor.

“While we’re on the right path in terms of getting players in the MLSPA [MLS Players Association] executive board, and getting someone like Sola Winley hired for the DE&I [diversity, equity and inclusion] hire for the league, I do believe the BPC played a strong part in the influence there,” said New England Revolution goalie Earl Edwards Jr., also a member of the BPC executive board.

“Those are the things that are really going to push the needle, when we have guys in decision-making positions to really create long-lasting change and improve the lives of Black people in our communities and in the league itself.”

Ebobisse also reckons with the fact that all the gains he, the BPC and other anti-racism activists have made over the last year-plus were only attainable because yet another Black man was killed by the police.

Would you have been able to accomplish all this without the death of George Floyd?

“No chance,” he responded.

“An organization like this wouldn’t have been taken seriously two years ago, three years ago. It would’ve been another group of angry Black men complaining about the status quo, not wanting to work hard to get to where we’re at, or where we want to be.

“It’s sad to me, it was always sad … that it takes Black death, Black tragedy to awaken a certain segment of the population, temporarily.”

The little faith that Ebobisse had in society, even after the groundswell of support for racial equality following Floyd’s death, was justified as the months went on. Support of the Black Lives Matter movement has eroded, with polling showing similar opinions of BLM in the months after the nationwide protests as they were before the video of Chauvin killing Floyd spread across the internet.

“There’s almost a statute of limitations on how long people can support activism and racial equity,” he said.

In the early months of the 2021 season, Ebobisse has continued this work. He advocated for vaccines for minority communities in the spring and publicly supported Black women (particularly soccer players) and the LGBTQI+ community through Athlete Ally’s “Playing for Pride” movement in June. (He’s also the creator of the Timbers’ “Educate. Elevate. Engage.” campaign to combat anti-Black racism, which provided teaching resources, including author Ta-Nehisi Coates’ article, The Case for Reparations.)

Jalil Anibaba, a defender with Nashville SC playing in his 11th season, met Ebobisse during Ebobisse’s rookie year in 2017 and has been a fan of the forward ever since.

“He’s extremely intelligent. His work ethic is impeccable; he always shows up,” said Anibaba, who, like Ebobisse, serves on the BPC executive board. “He’s always well-versed on all of the aspects of what we’re trying to do as an organization.

“… So, all-encompassing, Jeremy is just very much beyond his years and somebody who deserves all the respect and love that one could get.”

At the end of our conversation, I asked Ebobisse what progress, if any, he’s seen in America since he told white people that he wanted to make them uncomfortable.

“It’s complicated,” he said. “Generally speaking, I think it has been a positive out of a terrible situation. I think politicians are understanding race – are being forced to deal with race – in a way they hadn’t had to in 50 years.

“… We all have to do our parts as individuals within the various machines that we’re a part of. There’s enough of us doing the work that there will be change over the next year, to hopefully eight, that younger generations feel and can pick up on.”