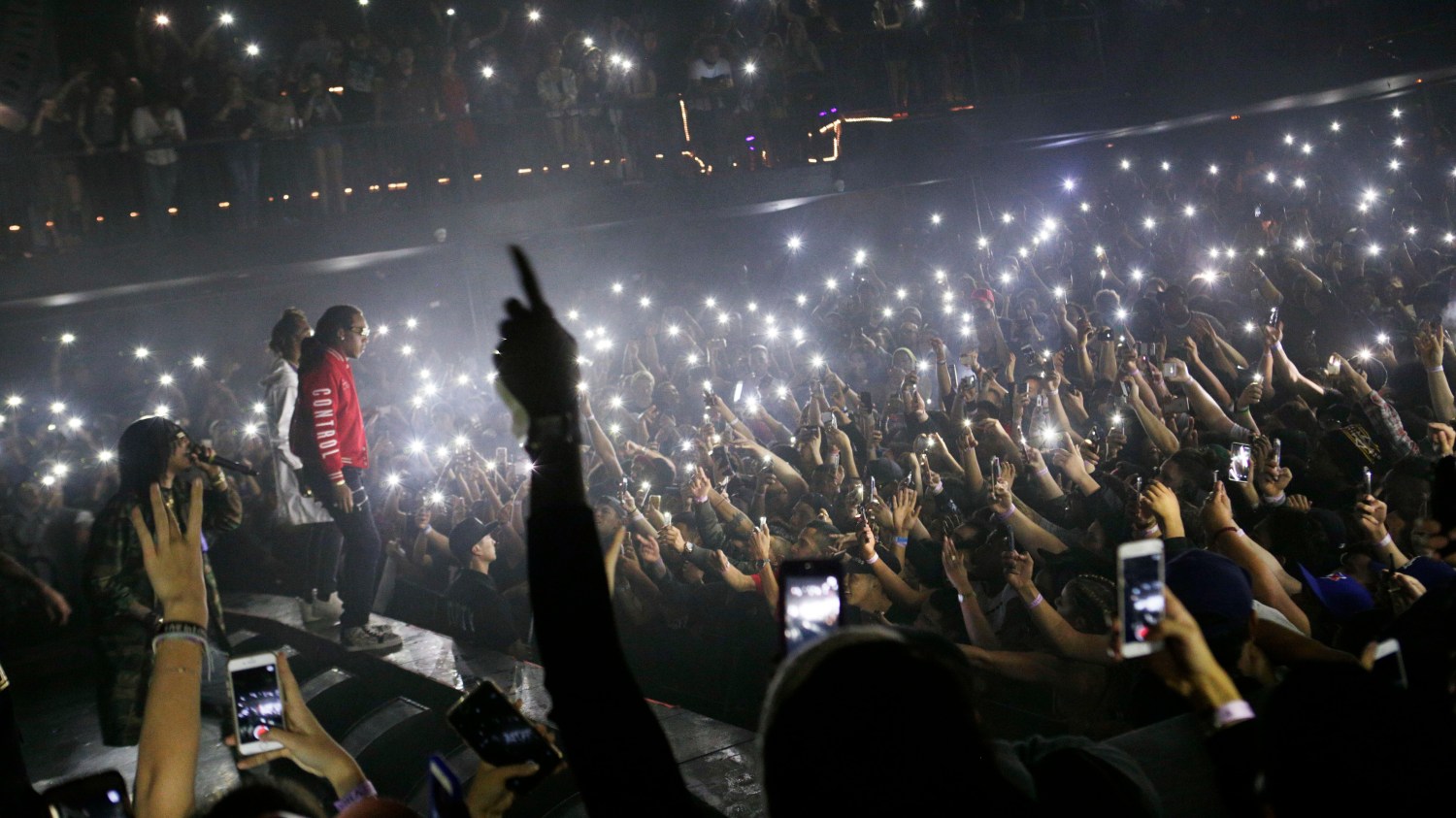 The Atlanta trio created ‘The Dab,’ has a No. 1 song, a No. 1 album and millions of streams — but they aren’t on the award show’s radar

On the same stage where Stevie Wonder once swayed, Carlos Santana once strummed, and Adele once serenaded, emerges Quavo, Offset and Takeoff. Dreadlocks hanging, custom frames shading their eyes, and blunts between their fingers, they are ready. The hip-hop trio from North Atlanta known as Migos finally rushes up the stage steps of New York City’s Highline Ballroom, on the fashionably late cue of DJ Durel.

Just hours before, hundreds of fans waited in the blistering cold of a late January night — all the way down West 16th Street, past the Western Beef Supermarket — for this very moment. And the Migos had been waiting, too. “If you don’t know,” Quavo informed the crowd, “Culture came out last night at midnight.” Snaps were already open in a sea of extended arms. Lights from phone flashes illuminated the stage as they steadily recorded, each person anxious for another beat to drop.

Of course they all knew. The faces in the crowd were highly anticipating Migos’ second album, Culture, aptly named after a culture of carefree blackness and youthful resistance — the one many of us, a good part of the time, are living within. Do it for the culture / They gon’ bite like vultures, Quavo flowed through his autotuned mic on “T-Shirt.” And that’s one price of doing it for the culture — peers, and even skeptics, try to replicate the magic. The Migos are true trendsetters, and everyone wants to do what they’re doing. As Takeoff says — “The drip, the swag, the dab, all of it.”

The Migos went on to perform every single one of Culture’s 13 tracks, all the while superproducer Zaytoven accented their rhymes with sounds from his keytar. Takeoff coolly came in late on one of his verses after getting distracted dapping up fans in the crowd, and all three members showed off new platinum plaques for their No. 1 megahit featuring Lil Uzi Vert, “Bad & Boujee.” The song hasn’t just sold over a million copies, it’s become a worldwide social phenomenon. It’s been dubbed over a clip from a 1990s sitcom. Nigerians are partying to it. The memes it inspires are endlessly creative, from an actual raindrop drop top to a rendition of a 230-year-old painting that features Quavo, Offset and Takeoff — “This ain’t Van Gogh, this Mi Gogh.” Go up to a random person in, let’s just say, Timbuktu, and say “raindrop.” How much you want to bet they respond “drop top”?

It’s the timeless opening of the hook of “Bad & Boujee” and it’s from the group that created what is still the most popular dance of the 21st century, “The Dab.” Just ask NFL MVP quarterback Cam Newton, Ellen DeGeneres and Hillary Clinton, Betty White or even contestants from the Scripps National Spelling Bee — the move is hard to resist on any stage, big or small.

The Migos are true trendsetters, and everyone wants to do what they’re doing. As Takeoff says — “The drip, the swag, the dab — all of it.”

So on that January night, while floating across the Highline Ballroom stage, the Migos are superstars. And in a week’s time, they’d have both the No. 1 song and the No. 1 album in the country, as Culture climbed atop the Billboard 200 chart in the days leading up to the 59th Annual Grammy Awards.

But don’t expect the Migos to be onstage in the 21,000-seat Staples Center during the awards show on Sunday. The best musical artists on the planet right now received no nominations. On the Grammys stage, the Migos might as well still be nobodies, though the musical and social empire they’ve built says otherwise.

Back in 2015, on the night of the 57th annual Grammy Awards, a premonition took the form of a meme that began circulating on Twitter. Someone skillfully photoshopped a picture of the Migos with the official Grammys branding and hashtag. “WINNER: Best Group of All Time,” the top of the image read. A joke, obviously. And to the chagrin of many, the Migos retweeted it. Some fans, however, tellingly believed the meme was real, and even tweeted a congratulation to the group for “making history.”

At the time, the Migos had made a name for itself with mixtapes such as Y.R.N. (Young Rich N—-s) and No Label II, which feature a slew of hits. Their debut commercial single, “Versace” which blew up massively when Drake hopped on the remix. There was “Bando,” “Hannah Montana,” “Fight Night,” “Handsome and Wealthy,” “Freak No More.” But the Migos from back then are a far cry from the Migos of right now.

Like rock, heavy metal and hip-hop icons before them, the Migos are not always the best role models. Beyond their embodiment of drug culture, past encounters with the law and wack stance on homosexuality (for which they later apologized), there’s genius in the Migos — behind the music, in their style and just the way they party. Quavo is the quintessential hook man, and so versatile on his verses that there’s an hourlong mix of only his features. Offset is a wordsmith, arguably the best lyricist in the group — his performance on Culture a coming-out party, as he’s spent nearly 17 months in jail since 2013. Takeoff is the king of ad-libs, from “MAMA!” to “DAB!” to “SKRT SKRT!”

“Our first album didn’t even do good,” said Quavo the day after the Highline show during a “Culture Class” the Migos hosted for students at New York University’s Clive Davis Institute of Recorded Music. “We felt like it got too tight on us. It was our first time: ‘Now it’s time to make an ‘album,’ let’s lock down and lock in and just try to be this person you ain’t.’ It didn’t work. So when we went back to the drawing board, and started talking out the real Migos lingo, I feel like y’all learned something from us, and we learned something from y’all.”

Of course Culture should be nominated in the best rap album at the 2017 Grammys. However, it’s not that simple. According to the Recording Academy’s website, “For the 59th Annual Grammy Awards, albums must be released between Oct. 1, 2015, and Sept. 30, 2016.” The No. 1 Culture dropped on Jan. 27, making it eligible for next year’s awards, not this year’s.

But what about the No. 1 “Bad & Boujee”? The song has already made it to the Golden Globes stage this year. “I really wanna thank the Migos — not for being in the show, but for making ‘Bad and Boujee,’ ” said Donald Glover while accepting the Golden Globe for best television series, musical or comedy, for his FX show Atlanta, on which the Migos appeared during its debut season.

“Like, that’s the best song ever,” Glover concluded. This co-sign led to a 243 percent increase in streams on Spotify. A week after the early January Globes, the song reached No. 1, and thought it’s battled with Ed Sheeran’s “Shape Of You,” it seems to like the slot a lot.

“My phone caught fire, no Samsung, though,” Quavo said of Glover’s moment. “It was crazy, man. That was the biggest blessing. For him to do that on that stage. That s— had old people in they phones wanting to know who we is. I walked through the airport and they’re like, ‘Migos! My-gos!’ It’s crazy. It’s crazy.”

So, why isn’t “Bad & Boujee” nominated for a Grammy? Maybe the song’s release didn’t meet guidelines for nomination — Apple lists Oct. 28, 2016, (past the 2017 Grammys deadline) as its official release date, though the Migos posted the song on their Facebook page on Aug. 28, 2016. Maybe it wasn’t one of the biggest hip-hop records of the year — nah, that can’t be the case, as only two out of the five songs in the category (“Hotline Bling” and “Famous”) have more Spotify streams than the Migos hit.

A hip-hop track has never won in the Song of the Year or the Record of the Year categories in the award ceremony’s nearly six-decade history. A hip-hop album hasn’t won in the album of the year category since 2004. Amid a renaissance of fresh hip-hop, blossoming supergroups such as the Migos and Rae Sremmurd are moving the culture but perhaps not the establishment. Rae Sremmurd’s had a Billboard No. 1 pop single with “Black Beatles,” which launched the #MannequinChallenge phenomenon. “Black Beatles” is eligible datewise for Grammy consideration, but was overlooked — even though Khalif Brown, aka Swae Lee of Rae Sremmurd, has a back door to winning a gold trophy. He co-wrote Beyoncé’s smash hit “Formation,” which is nominated for both Song and Record of the Year. Both Rae Sremmurd and Migos, along with other young stars such as Travis Scott, Lil Yachty, Lil Uzi Vert, 21 Savage and more, are the future of music whether the Grammys like it or not.

“We need to fix this. I feel the Grammy awarding system is way off and completely out of touch,” 21-time Grammy Award winner Kanye West wrote in a series of tweets in 2016, after Atlanta rapper Future’s hit “March Madness” failed to receive any nominations. “You like your black people a certain way also. You wouldn’t have Future perform and that man owned clubs last summer,” West continued on Twitter. “Has anyone at the Grammys ever heard March Madness??? Yes I have a problem with the Grammys. All artists have a problem with it and I am going to fix it starting right now … make the Grammys culturally relevant again.”

Almost a year his Grammy rant, in his first tweet of 2017, West put on for the future of the culture:

At the NYU’s Iris & B. Gerald Cantor Film Center, before taking their seats, members of the crowd were given pencils and notebooks. Culture Class was in session, and its instructors — Quavo and Takeoff — received a standing ovation upon taking the stage.

For more than an hour, they discussed their influence on fashion, pop and music culture, often revisiting their humble beginnings via jokes and anecdotes, while revealing what makes them tick.

“We family,” said Takeoff, who is Quavo’s nephew. “Nobody can try to separate us because it’s real family. Nobody can come between us.” He spoke about the Atlanta groups that came before Migos. “Cash Money, OutKast … just watching MTV, BET, just looking at them do what they do, perform, made me wanna do what I wanna do today.”

In the realm of authoritative flow, fashion sense and vibrant personality, no collective has come as close to replicating the OutKast oeuvre as the Migos.

In the realm of authoritative flow, fashion sense and vibrant personality, no collective has come as close to replicating OutKast’s oeuvre as the Migos. It took OutKast nine years to get its first No. 1 album on the Billboard 200 — 2003’s critically acclaimed, 11-times platinum Speakerboxxx/The Love Below, the last hip-hop album to win a Grammy for album of the year. It took the Migos eight years to get their first No. 1 album, but they’re still chasing that first Grammy nod.

So, the group “straight out Nawf Atlanta” is far from being OutKast, let alone the “greatest group of all time.” But they’re hungry. And, the Migos have the people — they have the culture — behind them.