The NCAA doesn’t have a Rich Paul problem. It has a problem with black men

The NCAA doesn’t have a Rich Paul problem. The problem is that its structure is designed to regulate the freedom of athletes to turn pro in primarily black sports but not in white ones.

And an entity that now preaches the importance of college graduation for agents doesn’t have the same righteous energy for black athletes at its most lucrative institutions.

Earlier this week, the NCAA implemented what was immediately labeled the “Rich Paul Rule,” after the man who represents NBA players LeBron James, Anthony Davis, Draymond Green, John Wall, Ben Simmons and 2019 first-round draft picks Darius Garland and Darius Bazley. The new regulations require that agents interested in representing players who are considering declaring for the NBA draft now must have a bachelor’s degree, be certified with the National Basketball Players Association for at least three years and take a comprehensive in-person exam at NCAA headquarters in Indianapolis. Paul, who never attended college, is one of many agents affected by this rule — but unquestionably the most prominent.

The NCAA’s move was instantly lambasted as hypocritical and vindictive. “The world is so afraid of ground breakers.…This is beyond sad & major B.S.,” tweeted comedian Kevin Hart. James, Paul’s biggest client, longtime friend and confidant, could only laugh at the NCAA’s energy, saying, “Nothing will stop this movement and culture over here.”

Only basketball must adhere to the new NCAA mandate. The actual text doesn’t mention race. Nevertheless, the writing is not just written on the wall, it’s been carved. It’s a “race-neutral” rule that isn’t race-neutral. This comes with historical precedence that the NCAA knows all too well.

One of the worst-kept secrets in sports is how top-tier college football and basketball programs directly benefited from desegregation. Before integration, the vast majority of top black athletes had no choice but to attend historically black colleges and universities (HBCUs). Once the larger and richer predominantly white schools began to integrate, HBCUs couldn’t compete. But there’s been a parallel development too: The graduation rates for black athletes at top sports programs remain consistently and embarrassingly low.

Shaun R. Harper, executive director of the University of Southern California’s Race and Equity Center, found that, overall, black male athletes graduate at higher percentages than black males who are not involved in sports. But that’s not true for the NCAA’s wealthiest leagues: the Power 5 of the ACC, Big Ten, Big 12, Pac-12 and SEC.

“The [NCAA] has claimed in television commercials that black male student-athletes at Division I institutions graduate rates are higher than black men in the general student body,” the report says. “This is true across the entire division, but not for the five conferences whose member institutions routinely win football and basketball championships, play in multimillion-dollar bowl games and the annual basketball championship tournament, and produce the largest share of Heisman Trophy winners.”

And an entity that now preaches the importance of college graduation for agents doesn’t have the same righteous energy for black athletes at its most lucrative institutions.

Black men made up 2.4% of the Power 5 student population but 55% and 56%, respectively, of its football and basketball teams. Of those numbers, 55% of black male athletes graduated in under six years, compared with 60% of black men in the overall undergraduate population and 76% of all college graduates.

“Over the past two years, 40% of these universities have actually had black male student-athlete graduation rates that have declined,” Harper said. “We’re supposed to be getting better, but actually 40% of these places have gotten worse.”

Meanwhile, the debate over paying college athletes is sharply divided by race. Most whites are against “pay to play,” while most blacks strongly support it because the current system exploits a largely black athletic base.

In the NBA, the sport is still primarily black. (The Institute for Diversity and Ethics in Sport found that during the 2015-16 season, 81.7% of NBA players were people of color and 74.3% were black.) But black athletes have significant power and influence over everything from where they play to who coaches them to the structure of their contracts.

This shifting power dynamic is beginning earlier and earlier too. Bazley skipped college last year to become a million-dollar intern with New Balance. R.J. Hampton and LaMelo Ball, both touted as 2020 lottery picks, are taking their talents to Australia for a year before declaring for the NBA draft. Hampton has already inked a shoe deal with Li-Ning.

As Yahoo’s Dan Wetzel noted, the new rule’s standard doesn’t apply to college hockey players who can be drafted out of high school but can choose to attend college if their draft placement doesn’t appeal to them.

If this wasn’t about a young black man who achieved his success out of the mud and then empowered other black men to recognize their worth in spite of an organization that has for years manipulated their talents for the organization’s gain, if this wasn’t about yet another American institution attempting to police black mobility and freedom, then it’s difficult to see what the actual reasoning is.

This brings the discussion back to Paul and James. It’s often been said there is a Jay-Z lyric for any situation in life. Perhaps the most fitting here is a bar from Jay’s 2001 album The Blueprint, which entered the Library of Congress in March: All I need is the love of my crew / The whole industry can hate me, I thugged my way through, he pledged on “All I Need.” In essence, this has been the motto for Paul, James and the two other members of their inner circle, Maverick Carter and Randy Mims. 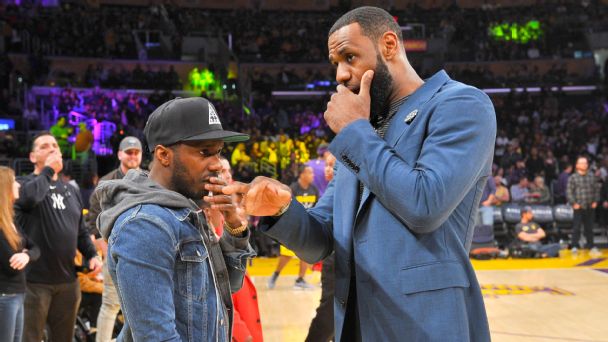 More than an Athlete: The Player’s Agent Read now

When James cut ties to agent Aaron Goodwin in 2005, eyebrows raised and many said that the young basketball phenom had risked his career before it truly tipped off. At the time, it was easy to understand why, given that Goodwin had helped the 2003 No. 1 overall draft pick obtain a bevy of endorsements, including Bubblicious chewing gum, Upper Deck trading cards, Sprite, Powerade and, most gaudy of them all, a seven-year, $90 million shoe deal with Nike. Few believed in James’ vision when he turned to three of his childhood friends to chart the course of his career on and off the court.

“I will promise you really ugly things will happen,” said former NFL player turned financial adviser Jim Corbett. “This is a big mistake, a bad decision that is going to cost LeBron.”

so i don't think it's the rich paul worse. it's actually worse than that. #highnoon pic.twitter.com/SAizOKe6yP

Which leads us to another Jay lyric, this one from 2009’s “Already Home”: And as for the critics, tell me I don’t get it / Everybody can tell you how to do it, they never did it. Thanks to the friends he entrusted with his career nearly 15 years ago, James is not only the most powerful player in basketball history but also a player in Hollywood, fashion, education and politics.

Money and power elicit respect, as elucidated by Kimberly Jones. But they also open the door for fear and angst. President Donald Trump took shots at LeBron on Twitter last August after the launch of his I Promise School in Akron, Ohio, saying it was hard to make “LeBron look smart” and weighed in on the NBA’s most contested debate, saying he preferred Michael Jordan over James — which Jordan quickly rebuffed. The two were labeled “mob bosses” by an unnamed Western Conference general manager last season after public attempts to move Anthony Davis to the Lakers (a move that eventually happened).

Rich Paul is a threat. To the status quo. To the hierarchy of power. And to the image of an industry that is still dominated by white males and has long exercised fiscal and moral authority over black athletes.

Basketball altered its rules to make it harder for three players who made the game look too easy (i.e., they dominated the white players too much): Bill Russell, Wilt Chamberlain and Kareem Abdul-Jabbar. Maybe the NCAA didn’t implement this rule with Paul as its sole motivation. Just like maybe the NCAA wouldn’t be so open to criticism if it made the education of players a higher priority.

Unfortunately, the NCAA addressed a perceived problem while never addressing its own. Sometimes sports really is a reflection of life.