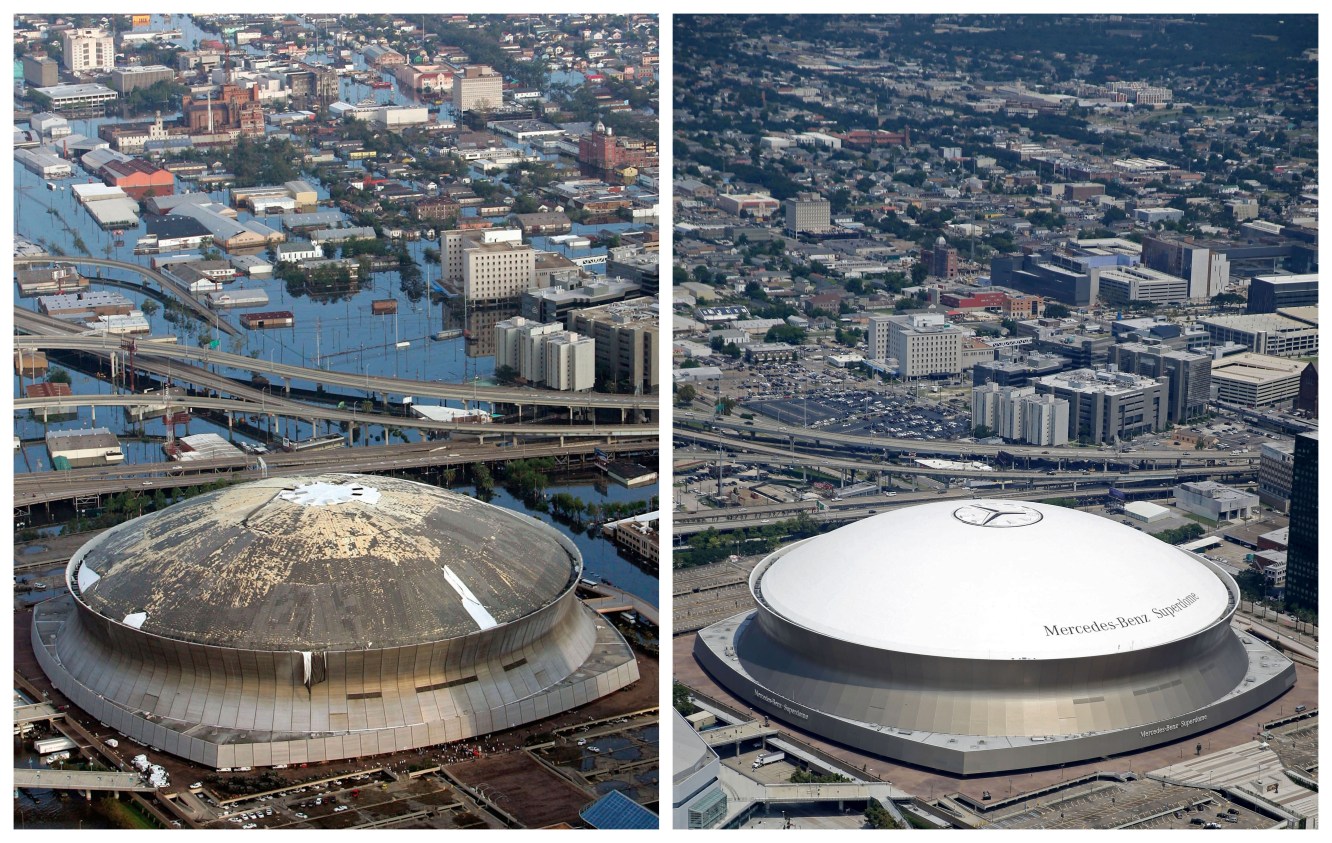 This combination of Aug. 30, 2005, left, and July 29, 2015 aerial photos shows downtown New Orleans and the Superdome flooded by Hurricane Katrina, left, and the same area a decade later. When the New Orleans Saints host rival Atlanta on Monday night, it’ll mark the 10-year anniversary of the stadium’s reopening, and a victory over the Falcons that symbolized a city’s determination to rebuild from one of the worst natural disasters in American history. AP Photo/David J. Phillip, left, and Gerald Herbert, File
Get Lifted

The Saints go marching in: Rev. R. Tony Ricard hopes for a victory in MNF rematch

Monday night, the team’s chaplain celebrates memories of returning to the Superdome 10 years ago

Ten years ago, Rev. R. Tony Ricard drove through the streets of New Orleans, anxious to arrive at the Louisiana Superdome. He parked his car and headed to the exterior plaza surrounding the dome, where he joined thousands of other fans for a special pregame show. Rock bands U2 and Green Day performed special tributes to a city that was still recovering, but very much alive.

In a few hours, Ricard’s beloved New Orleans Saints would be taking on their longtime divisional rival Atlanta Falcons on Monday Night Football. He was sure to get there in enough time to park and make his way through the crowd before entering the stadium.

“I would say the crowd had probably been building all day long,” Ricard recalled. “When we got there, there was already a thick crowd waiting to get in the dome. As we stood outside, a countdown clock above every entrance. It was so exciting outside because people were just waiting for that moment. And so, as the clock was ticking down, it was almost like celebrating New Year in Times Square. For us, it really was like New Year. For us, it was the beginning of something new.”

This night would be a special one to Ricard, and thousands of other New Orleanians who had traveled near and far to meet for this game.

The previous 74 Saints-Falcons matchups were nothing more than a gathering of fans on either side, cheering and jeering, hoping to be rewarded with a team win and the bragging rights to match. This time, the rivalry’s 75th meeting, was more than a football game.

It was a homecoming for the Saints, who had not played in the dome since their preseason game on Aug. 26, 2005, three days before Hurricane Katrina made landfall. This game symbolized a revitalization of the city Ricard knew and loved so dearly.

It was the rebirth of New Orleans.

Just 13 months before the reopening of the Superdome on Sept. 25, 2006, Hurricane Katrina devastated the Gulf Coast, leaving nearly 2,000 dead, 800,000 homes destroyed and more than 400,000 displaced. Ricard was included in the number of displaced residents of New Orleans. He was evacuated to central Louisiana, where he sought temporary housing at the Louisiana Lions Camp site in Leesville for 2 1/2 months before moving into a used recreational vehicle in Algiers, a neighborhood in New Orleans. He spent his days repairing his home as well as his former church, Our Lady Star of the Sea.

During drives on Interstate 10, Ricard would pass the Superdome and take note of its damage. The stadium’s structure — which served as shelter for more than 40,000 during the storm — stood firm, though the building was a shell of itself. The building’s interior was filled with trash, grime and rain damage sustained during its use as a shelter. Its signature white roof was shredded from wind damage, and now bore two large holes. Ricard wondered when, or if, the Superdome would even make a full recovery.

On Sept. 25, 2006, while walking around the newly renovated dome, all of Ricard’s doubts had been removed. His faith had been rewarded.

“When we walked in, I think my section was 134. We were at Gate C,” Ricard said. “Although 134 was way, way away from Gate C, I had to go through the entrance to walk in and see the field. It was almost like having a loved one who went away to war, and when they got home, you’re so excited you just want to hold them and hug them. If I could’ve ran down and hugged the field, I would have.”

Once the game kicked off, Ricard found himself wrapped into the action. The crowd chanted and yelled so loudly that fans, commentators and players could barely hear themselves. When then-Saints safety Steve Gleason blocked a Falcons punt with 13:35 left in the first quarter, the dome erupted even more. The moment was so powerful, a statue was sculpted and later unveiled outside of the Superdome, six years after the 23-3 Saints blowout victory.

As Ricard observed and absorbed the electrifying scene around him, there was only one other memory he could think of when the energy in the room gave him chills.

“The only other time I felt that same feeling in the dome was in 1987 when Pope John Paul II came into the Superdome,” Ricard said. “He was led by the St. Augustine Marching 100 Band, riding in the popemobile. St. Aug came marching, and the pope was behind them. There was a feeling that could only be compared to the moment the Saints stepped on the field in the first game after Katrina. In ’87, I was standing in the presence of a living saint. In 2006, I was standing in the presence of the new Saints.”

Ricard, a 52-year-old native of New Orleans, was born into Saints fandom. “I come from a family that you’re either a Saints fan, or you’re not allowed in the family,” Ricard joked. Ricard, along with his brother Kevin and sister Deidra, were taught to be proud Saints fans, no matter the score of the game or how terrible the season. What started as a tradition, with Ricard, his father Rodney and his brother attending Saints games at the Superdome, grew to also include his mother Rita, who didn’t like football but wanted to spend time with her family.

“My dad told her she didn’t like football and she said, ‘I like my family, and if I want to be with my sons on Sundays, I know I need to be in the Superdome,’ ” Ricard said. The tradition never ended.

In a city where nearly 30 percent of residents are Catholic, Ricard, or “Father Tony,” is somewhat of a local celebrity. Besides being the campus minister and chair of the theology department at St. Augustine High School, Ricard serves as pastor of St. Gabriel the Archangel Roman Catholic Church in New Orleans. From his entertaining yet informative sermons and love for the Saints, Ricard also landed a side gig as the New Orleans Saints’ Catholic chaplain. He began as a substitute for Rev. Robert Seay, the former Saints chaplain, shortly after being ordained by the Archdiocese of New Orleans in 1995. Ricard officially took over the role as chaplain in 2000 when Seay, a Franciscan priest, left his position with the Saints to head a church parish in Lafayette, Louisiana. For 16 years, Ricard has led Mass for Saints players, coaches and staff the night before every home game.

In this role, Ricard is awarded two tickets and a parking pass for each home game, and sometimes receives extra tickets from Saints owner Tom Benson. Ricard attends the home games and usually gives his spare tickets to fans he knows will enjoy the game just as much as he does. As a priest at a game where crowds are generally rowdy and often fueled by alcohol, Ricard still manages to take in the atmosphere and blend right in.

“I always jokingly say I never ever wear a cross or a collar when I’m in the stands in the game because I know something will happen in the game and I will jump up and something will flow out of my mouth that should not flow out of the mouth of a priest,” Ricard said. “I’m always afraid that if I say something, as they say in New Orleans, ‘It’ll hurt somebody’s religion.’ ”

What makes Ricard such a popular priest in New Orleans are his unconventional methods of spreading the word of the Lord, which some detractors disapprove of. Whether appearing in Thursday Night Football promos or dancing his way down the aisle and donning a Saints jersey after Mass, Ricard believes it’s OK to have fun while keeping the message intact.

“If you can’t have fun when celebrating God, you must be serving the wrong God,” Ricard said. “But even more, if God gives us all this joy and excitement, why can’t we bring it into church? Why can’t we celebrate how we really feel and what we really feel in the midst of it all?

“What I try to do with all of my Masses is to lift them up in a whole new level of life and understanding, and I think part of what we have, as we laugh and joke about the New Orleans Saints in church, is a realization that the Saints are an integral part of the city of New Orleans.”

Religion in New Orleans is so deeply rooted that it should be no surprise it also had a hand in the naming of the city’s first football team. Even before the team was founded on Nov. 1, 1966, the Catholic holiday of All Saints’ Day, Dave Dixon, the New Orleans businessman who led the charge to bring an NFL team to New Orleans, cleared the name with the late Archbishop Philip M. Hannan. According to Dixon’s 2008 book, The Saints, the Superdome and the Scandal, Hannan thought “Saints” would be a perfect name for the new team.

“Oh, I think ‘Saints’ is a wonderful name for our team,” Hannan said. “Nothing sacrilegious at all. Besides, I have this terrible premonition that we might need all the help we can get.”

Ricard also makes the connection of Christian hymns that have now been incorporated within the culture of the football team, noting the song When the Saints Go Marching In as a perfect example of the cross-section of sports and religion in New Orleans.

It’s a theory Ricard hopes will carry over into Monday night’s game, along with his “Prayer of the Who Dats,” a special Saints prayer that gets updated every year before the season begins.

As Ricard prepares for the game, he’ll remember the special memories he made 10 years ago in the building that many thought would never reopen. Ricard hopes to witness the Saints earn their first win of the season, and looks forward to creating more memories with the fans in attendance.

“I’m just excited about the game as always,” Ricard said. “Although some people think that football is just a game, for us it’s more than a game. When people come into the Superdome, they put aside all their differences and all the things that separate us, and they become one. I’m looking forward to that.”