‘The New Yorker’: Kadir Nelson’s ‘A Day at the Beach’

Everything in ‘A Day at the Beach’ is suggestive of a day that’s utterly ordinary, and therein lies its beauty 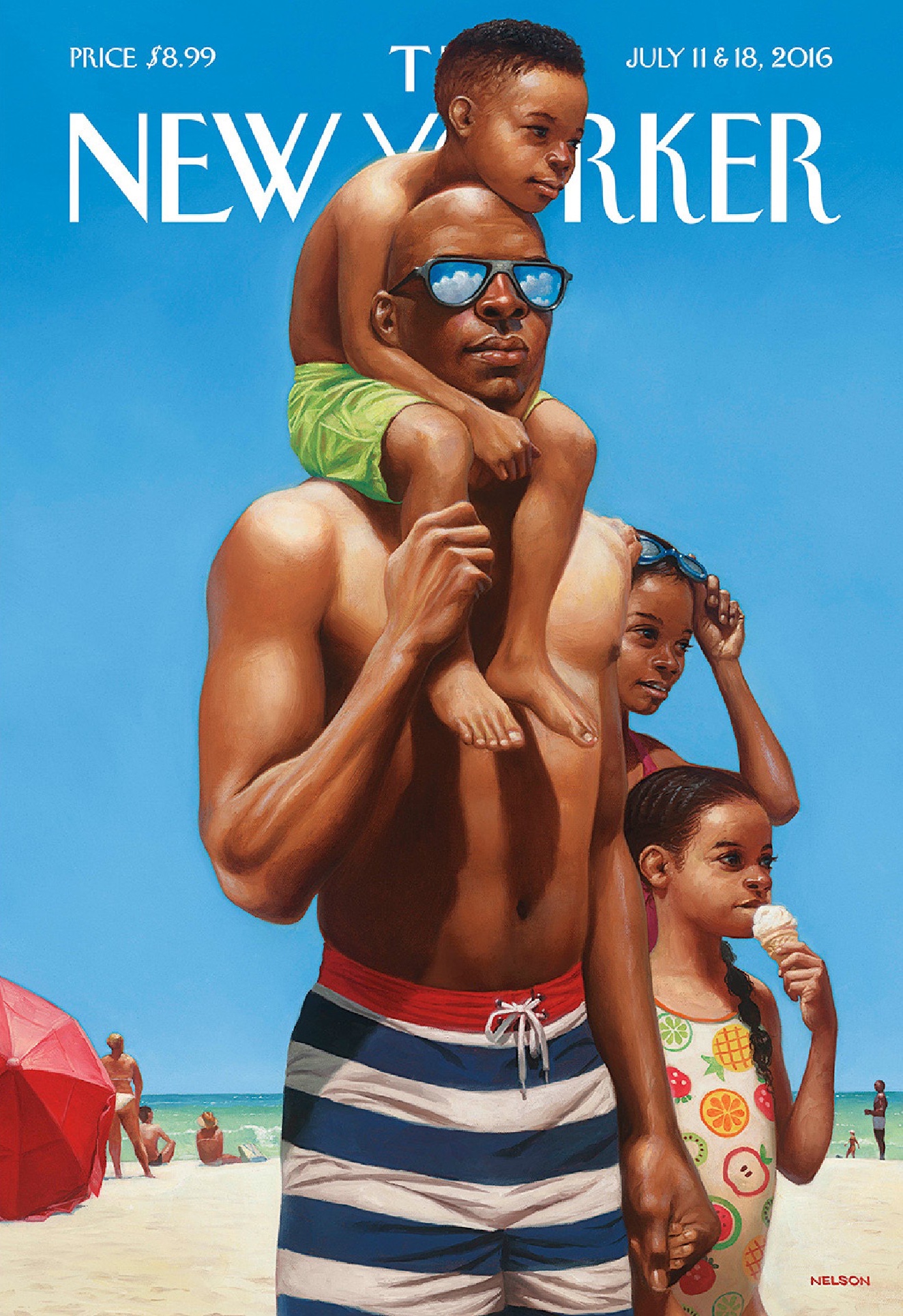 Kadir Nelson’s recent A Day at the Beach is an illustration of what it means to, in the words of first lady Michelle Obama, “be better.”

Nelson, 42, is an acclaimed Los Angeles-based artist and illustrator whose work has been featured in more than 20 children’s books. In 2008, he received a Caldecott Honor for his illustrations for Henry’s Freedom Box written by Ellen Levine. 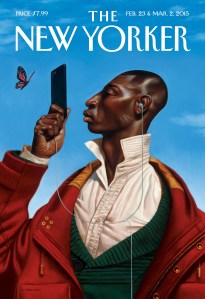 Nelson specializes in illustrating stories of black history, including stories about abolitionist Harriet Tubman, baseball pioneer Jackie Robinson, and South African leader Nelson Mandela. He’s also penned children’s books, including 2008’s We Are the Ship: The Story of Negro Baseball. His commissions include works for Sports Illustrated to DreamWorks to Coca-Cola. His portrait of politician Shirley Chisholm hangs in the U.S. Capitol. Last year, Nelson’s take on The New Yorker avatar Eustace Tilley, Eustace Negro (see above), was one of nine cover illustrations chosen to celebrate the magazine’s 90th anniversary.

The New Yorker has repeatedly tapped Nelson for cover illustrations, but it’s this summer’s cover featuring a dad and his three children that has struck a chord — it’s a deceptively simple portrait of black fatherhood. It recalls another moment from earlier this summer, when the White House hosted its first United State of Women summit. The first lady sat down for a casual interview with talk host Oprah Winfrey — you know, just her, Oprah, and a ballroom of several thousand people, almost all of them women. “There’s a lot of cool men out here,” Winfrey remarked. “I love the president’s speech saying you’re looking at a feminist. What can men do leaving here?”

The dad of A Day at the Beach is the antithesis of bumbling pictures of fatherhood promulgated by Daddy Day Care or Three Men and a Baby.

“Be better,” the first lady said, her tone deliberately arch, to raucous applause. “Be better at everything. Be better fathers. Good Lord, just being good fathers who love your daughters and are providing a solid example of what it means to be a good man in the world, showing them what it feels like to be loved.”

Obama was just getting warmed up.

“Men can be better husbands, which is — be a part of your family’s life,” she continued. “Do the dishes. Don’t baby-sit your children. You don’t baby-sit your own children!” More massive applause and whooping. “Be engaged. Don’t just think going to work and coming home makes you a man. Being a father, being engaged, all that stuff is important.”

In A Day at the Beach, which served as the cover illustration for the July 11-18 issue of The New Yorker, an attractive young black man in red, white and blue striped swim trunks is pictured at the beach with his three children. His son sits on his father’s shoulders, his arms wrapped lovingly around his neck. His chin rests comfortably on his father’s head. The man’s left hand holds that of his daughter, who is licking an ice cream cone. The eldest daughter is pictured behind them, adjusting her goggles. It’s a bright, peaceful image. The only reflection in the father’s aviators is an image of boisterous cumulus clouds.

Everything in A Day at the Beach is suggestive of a day that’s utterly ordinary, and therein lies its beauty.

For most of us, forays to the beach are 80 percent logistical endeavor and 20 percent actual leisurely enjoyment of sun, surf and sand. There are coolers to stock, chairs and umbrellas to schlep, towels and sunscreen and hats and flip-flops to remember. It’s a whole mishegoss. And that’s a trip that doesn’t include small children. Of course, these logistical duties — all the requisite labor that makes a trip to the beach feel fun and effortless — seem to fall disproportionately at the feet of women, especially when there are children involved.

It’s a bright, peaceful image. The only reflection in the father’s aviators is an image of boisterous cumulus clouds.

Which brings us back to Obama and Oprah. What Obama was imparting to the men of America, in her entreaty to be better, was how to lead lives as feminists. It was about how to not let silly, long-entrenched gender roles get in the way of being decent fathers and husbands.

A Day at the Beach is what being better looks like.

“I grew up close to the shore, and I have always loved spending time at the beach,” Nelson told the New Yorker. “When I was young, it meant time with my dad, and now that I’m a father myself, I relish the long summer days spent with my own children.”

The father in Nelson’s illustration is clearly at ease, and so are his children. This exercise — of beachgoing, of ice cream-eating, of swimming and sunning — is remarkably unremarkable. It’s normal. The dad of A Day at the Beach is the complete antithesis of the bumbling pictures of fatherhood promulgated by Daddy Day Care or Three Men and a Baby, movies whose comedic appeal relied on defining the work of parenting as the work of women. He’s familiar because he’s Nelson, he’s Nelson’s father, and because he’s the president with Sasha and Malia vacationing in Hawaii, not to mention countless other black fathers all around the country.

This exercise — of beachgoing, of ice cream eating, of swimming and sunning — is remarkably unremarkable. It’s normal.

It’s not a surprise that this work would come naturally to Nelson. After all, part of being an effective children’s book author and illustrator requires a certain ability to see the world through the eyes of children, and a desire to make it understandable. It’s not an enterprise suited to big artistic ego, where the challenge lies with the audience to come to the artist, rather than the other way around. “As a young kid, I didn’t see a lot of representations of African-Americans,” Nelson told CBS This Morning earlier this year. “ I felt like I had a responsibility to tell that story — that children who would go to museums or art galleries or open their books and see images that look like them and be proud of those images.”

Weeks before he published an essay in Glamour about how fatherhood informed his feminism, the president gave a speech at United State of Women, too, where he was, essentially, one of many opening acts for his wife.

“I may be a little grayer than I was eight years ago, but this is what a feminist looks like,” the president said. “Of course, in my household, there’s no choice.”

Gray hair aside, he could have just as easily been referring to the father in Nelson’s illustration.