The NFL without Odell

It was written all over Odell Beckham Jr.’s face. He didn’t have to say a word. His fractured ankle — suffered in Sunday’s 27-22 loss to the Los Angeles Chargers, which dropped a decrepit New York Giants squad to 0-5 on the season — will require surgery. Beckham tallied 97 yards on five catches and one touchdown before going down. In what could be his final 2017 image, the league’s most dynamic talent sat demoralized on the back of a cart in tears.

The loss of Beckham is a hit stick to the league’s cultural capital. He’s set to cash in more than $10 million in endorsements. Nike can’t be too happy: In May, the company and Beckham came to terms on the richest shoe deal in NFL history — nearly $5 million a year for five years. Beckham’s wardrobe, the football equivalent of Russell Westbrook’s, makes nearly as many headlines as the wind sprints, acrobatic one-hand catches and intricate end zone routines that could moonlight as music videos.

In a quarterback-driven league where fan loyalty largely resides with the entire team, Beckham is an individual, non-quarterback star (like Randy Moss before him) whose brand is just as much about name on the back of his jersey (fourth overall in 2016 sales) as the team logo on his helmet. Beckham’s social media influence is huge — he’s the most followed NFL player on Instagram with more than 9 million followers. For context, Miller, J.J. Watt, Tom Brady, Russell Wilson and Newton have 1.2 million, 2.8 million, 2.8 million, 3.1 million and 3.9 million followers, respectively. With 55 percent of all 18- to 29-year-olds in America on Instagram, Beckham’s appeal to the younger crowd separates himself from his peers.

Jerry Jones tells players to stand up or be benched.

Should NFL owners be allowed to tell players they have to stand for the anthem?

On his off days, Beckham is a regular fixture at NBA games. He has the respect of LeBron James. Kaepernick, too. He’s won the adoration of Drake (and likely a spare set of keys to his mansion). He even, allegedly, friend-zoned Rihanna. He texts Michael Jordan. He takes selfies with Beyoncé and rubs shoulders with an even more famous Beckham — David. And Beckham’s cleats are always in. He shifts the culture by driving it, which is why his injury affects NFL culture far beyond the Giants’ red zone offense.

The Giants’ season had effectively been in rice for weeks. But the loss of Beckham means the loss of one of football’s most popular ambassadors at a time when America’s most popular sport is in the crosshairs of societal debates that the president weighs in on almost daily. While Beckham’s attitude has long been perceived by some as a character’s most notorious flaw, his impact on the sport is felt leaguewide. “I would be remiss not to acknowledge how engaging and professional Odell [Beckham Jr.] was during the entire week of the Pro Bowl,” NFL executive vice president Troy Vincent said in February. “By far and away, he represented the New York Football Giants and the NFL with great poise, congeniality and professionalism.”

Beckham’s fractured ankle, the same one he injured in a preseason game versus the Cleveland Browns, is likely the bookend to his turbulent 2017. The year, of course, began with Beckham, Victor Cruz and several other Giants partying on a yacht in Miami with Trey Songz.

The January boat party followed a playoff-clinching win over the Washington Redskins, and Beckham was largely blamed for the team’s lackluster postseason exit a week later against the Green Bay Packers — for what it’s worth, and as far as the mood on Twitter, the Giants haven’t won a game since. Then, in July, Beckham, who reached 3,500 yards faster than any receiver in league history, declared he wanted to be not only the league’s highest-paid receiver but the highest paid player, “period.” And just last month during a game versus the Philadelphia Eagles, Beckham critics feverishly salivated at the opportunity to throw him under the bus after a touchdown celebration in which he mimicked a dog urinating in the end zone. Beckham revealed later that the celebration was a response to President Donald Trump’s “son of a b—-” statement. After his second touchdown in that game, to far less fanfare and debate, Beckham raised his fist. Except for Kaepernick and maybe Lynch, there is no more polarizing NFL personality than Beckham. The conversation around him never stops. The goalposts just shift in a league that served up the following just on Sunday: 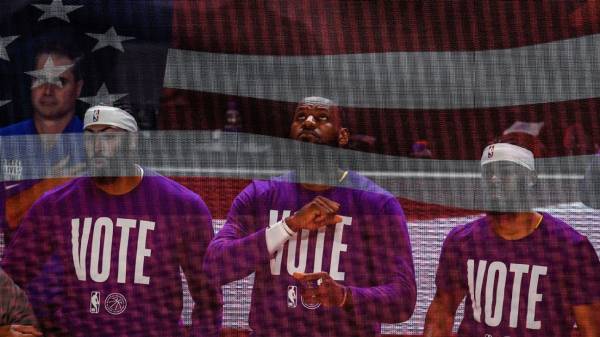 In a long-planned move, Vice President Mike Pence walked out of the Indianapolis Colts-San Francisco 49ers game as several members of the Niners kneeled during the national anthem. Dallas Cowboys owner Jerry Jones lashed out after his team’s 35-31 loss to the Packers by saying that any member of the team to “disrespect” the flag would not play. Miami Dolphins offensive line coach Chris Foerster was seen snorting a white substance in a video posted on Facebook by a woman Foerster was confessing his love to. The Tennessee Titans denied Kaepernick a tryout after a hamstring injury to its starting quarterback, Marcus Mariota, opting instead for unsigned journeyman Brandon Weeden. Houston Texans superstar defensive lineman Watt suffered a tibial plateau fracture in his left leg. Meanwhile, after a week of self-inflicted controversy, Carolina Panthers star quarterback Newton pieced together a second consecutive MVP-like performance with 355 yards and three touchdowns versus the Detroit Lions.

In quarterback-driven league and where fan loyalty is to teams, Beckham is the rare individual non-quarterback star (like Randy Moss before him).

And then: “I knew it was bad,” Giants tight end Evan Engram said about Beckham’s injury after the game. “Bad” is an understatement. Beckham’s ankle headlines a decimated Giants receiving corps that had the makings of quite possibly the best in football. Both Brandon Marshall and Sterling Shepard were ruled out of the second half of Sunday’s game with ankle injuries. Per Adam Schefter, Dwayne Harris’ fractured foot will end his season. Sunday’s setback also destroys Beckham’s quest for a fourth consecutive Pro Bowl and 1,000-yard season and the pipe dream of exorcising the demons of playoffs past. It complicates an already foggy contract situation too. Down their best offensive player, the Giants lose their most marketable face, with two prime-time games still left on the schedule, in a season on pace to go down as one of the worst comedy of errors in team history.

For the NFL, it’s a season in which the biggest headlines come from the sidelines, and the Oval Office. The season isn’t even halfway over and its traffic jam of moral dilemmas, including the saga of Kaepernick’s quest to return, dominate discussion. Which is why the NFL without Beckham is a blow it could ill afford. There’s no Plan B for replacing one of the most recognizable stars in the world in the league’s biggest media market. There’s no way to re-create that cocktail of production, swag and divisiveness that comes from the former LSU standout. The NFL is in a position it’s become all too familiar with in recent years — although Beckham’s injury is, of course, beyond its control — behind the eight ball.

As Beckham was carted off the field Sunday, towel over his head to mask the pain, he again didn’t have to say a word. One of his famous friends already had, fittingly on a song called “Do Not Disturb”: They tell me I need recovery/ Maybe gettin’ back to my regular life will humble me/ I’ll be back in 2018 to give you the summary.