The only thing to fear is playing like that again

How do the Cavaliers recover from two epic stinkers?

The motto at the Athletic Mind Institute in Dublin, Ohio, is simple: “Perceive. Believe. Achieve.” Which beats the collective national slogan for the Cleveland Cavaliers today: “Put a fork in ’em.”

Todd Kays, a sports psychologist at the institute, perceives, along with most of America, that LeBron James and his inferior NBA Finals team played like capitulating kittens in Game 2 Sunday night in Oakland, California, where the Cavs lost to the Golden State Warriors by 33 demoralizing points.

“I was watching with my stepson and my first thought was they’re so tentative,” Kays said by phone Monday from his office. “My second thought, honestly, was shock, like, ‘What is happening? This is happening again.’ ”

Being a sports psychologist in northern Ohio, where the scarred citizenry has not celebrated a major-revenue sports title since 1964, is a little like being a real estate agent in a war zone: Once you think you’ve sold someone on the idea of happiness, upward mobility and serenity, it all gets blown to hell.

So how to believe and achieve after the Warriors spanked you hard on their way to what felt like much more than a 2-0 series lead, in a Finals in which you’ve already been outscored by 50 points, against a team you’re 0-for-your-last-7 against – heck, in a series that Warrior Stephen Curry has yet to erupt in?

Really, how do you psychologically come back from a beating in which you were dominated so thoroughly that the only people publicly saying the series isn’t over are on the two teams involved, mothers of Cavs’ players and Moondog, the team mascot?

You don’t do what Tyronn Lue did after Game 2, which was to dismiss the notion that his Cavaliers’ confidence was wounded in a game in which 35-year-old journeyman Richard Jefferson was his team’s second-leading scorer. (Replacing the reeling J.R. Smith with R.J. is less going to the bench than going on an archaeological dig.)

“I don’t see a mental hurdle … it isn’t anything mental,” Lue, Cleveland’s first-year coach, said with a straight face. When asked if it would be difficult to get past the two games in Oakland, he replied, “No, these two games are over.”

This was a rookie mistake, according to several sports psychologists, including Kays:

“The first thing I recommend they do is put everything on the table,” Kays said. “They’ve been outplayed on every front. Hit it head on. When we face fear, we take away the power of that fear. The human mind often makes things out to be more fearful than they are. It’s time to put it out there and deal with the acronyms for fear.”

The Cavs have two F.E.A.R. options before Game 3, he said. They can:

Forget Everything and Run.

Or … Face Everything and Rise.

I know. It’s not exactly Denzel Washington’s motivational speech in Remember the Titans, or Kurt Russell’s in Miracle. But since Cavalier Kyrie Irving is going 1-on-5 at the moment, teammate Kevin Love is seeing stars and James suddenly has no confidence in his midrange game, just go with it. James already has.

In the book, How Champions Think: In Sports and In Life, the renowned University of Virginia sports psychologist Bob Rotella writes candidly about his sessions with James several years ago, which were prompted by Lance Blanks, the Cavs’ former assistant general manager and a former Virginia player.

When he asked James how he was doing in regard to his goal of being the game’s greatest player, James initially only spoke about his skills. “My teams aren’t going to win championships if I don’t become a better 3-point shooter,” he told Rotella.

Rotella’s remedy included visualization, suggesting the Cavs compile a video of James making 3-pointers to his favorite music and hire a shooting coach and putting in the work: 200 3-point attempts off the dribble per day, followed by 200 more catch-and-shoot 3s. He also suggested he read about basketball legends Michael Jordan and Bill Russell and spoke to both of them about what made them great leaders.

James went on to the Miami Heat, of course, where he became a 40 percent 3-point shooter, won two titles and became the most accomplished player of his era.

Now he and his team face another crisis of confidence: He appears timid on the perimeter, so convinced he’s going to miss that he puts his head down and bulls toward the basket, no matter who’s in the way. The Cavs can’t get out of their own way against a vastly superior and deeper offensive unit.

It takes a certain indomitable mindset to move on after that eyesore the Cavs played on Sunday night, a certain mental fortitude to step back from the carnage, breathe and make your mind follow your body.

But if Irving is going to trust his teammates again, if James is going to find his range and rhythm from outside and the bench is going to wake from its Finals slumber, the way back into this series begins one way, said Kays. 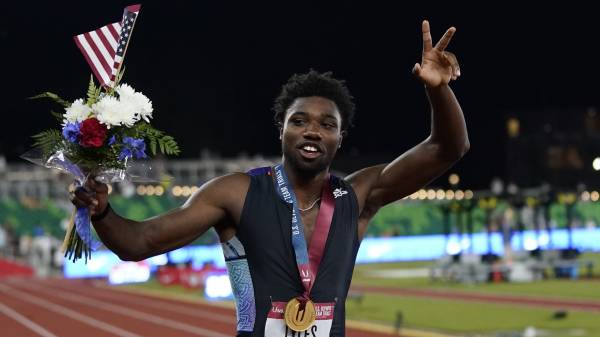 A man of many interests, Olympian Noah Lyles is now only focused on winning the 200-meter dash Read now

“Realizing fear doesn’t matter,” he said. “Courage is when we step toward the fear. That’s what the Cavaliers need. They have to be very, very clear, each one of them, of their individual roles and their game plan as a team.

“They can’t get caught up in this thought before Game 3, ‘Oh, we’re already down 2-0.’ We’re human. We get caught up in all this stuff. But I would tell them to focus on their role for just that game.”

Kays said he’s sorry to miss Game 3 in Cleveland, but he was leaving on a plane for Oakland to work with a couple of clients in the Bay Area. He maintained that none of them played for the Warriors.