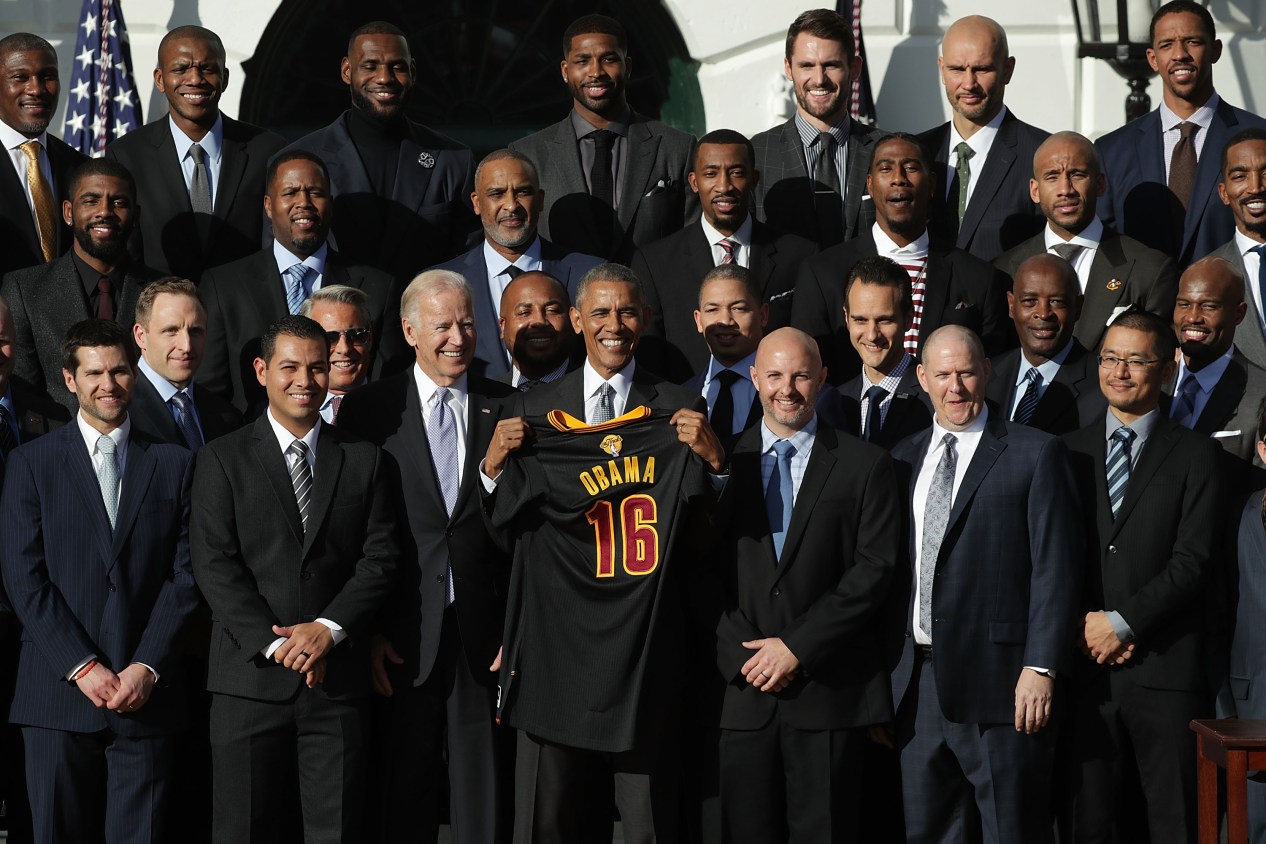 The president, the king — and a country in transition

The final White House meeting between President Barack Obama and LeBron James came with laughs, mutual respect and an aura of uncertainty

As reporters waited for access to various rooms in and around the White House last Thursday, there were certain themes uniting the conversations.

What an odd day.

Donald Trump and LeBron James at the White House on the same day? You can’t plan irony like this.

How will President Barack Obama maneuver such polar opposite appointments?

How will he do it following the most volatile campaign cycle and most improbable election night in the country’s history?

Can anyone blame Obama if his mind really isn’t all here?

On Jan. 31, 1963, Bill Russell’s Boston Celtics visited the White House. When he heard that the world champions — who had defeated Elgin Baylor, Jerry West and the Los Angeles Lakers in a seven-game thriller the season before — were in his crib, President John F. Kennedy invited the squad to the Oval Office. The leader of the free world wanted to meet basketball’s preeminent franchise as much they wanted to meet him.

This kind of presidential/NBA championship courtship — which wouldn’t happen again until 1978 with the Washington Bullets and President Jimmy Carter — is the first instance of NBA champions visiting the nation’s most famous mansion with the world’s most powerful leader as their tour guide.

Barack Obama and LeBron James’ biggest curse? Living up to a legacy that’s still ultimately more of a working draft than a finished product.

Head coach Red Auerbach and players Bob Cousy, Tom Heinsohn, Sam Jones, John Havlicek and more were immortalized in a photo and grainy video with Kennedy. Russell, who averaged 23 points, 27 rebounds and six assists in the NBA Finals, was conspicuously absent. JFK inquired about why the face of the Celtics was AWOL. Not for political reasons, personal issues or prior commitments. Russell ignored his teammates when they told him where they were going, believing they were playing a prank on him — he stayed in bed and missed his chance to meet the president of the United States at the White House. Kennedy was assassinated 296 days later in Dallas.

There was no way LeBron James, Kyrie Irving, Kevin Love or any Cleveland Cavalier would sleep through a scheduled afternoon appointment at 1600 Pennsylvania Ave. Especially as Obama himself requested their attendance — and J.R. Smith’s shirt — shortly after the Cavaliers defeated the Golden State Warriors in June. And especially as they would be the final NBA championship team to visit the first black president.

Obama and James’ relationship — at least politically — can be traced back to July 2008, when the basketball megastar donated $20,000 and delivered an address at a fundraising event for the then-freshman senator from Illinois. The two most analyzed, critiqued and polarizing black men in America, the duo — born 23 years apart — have evolved and experienced growing pains in the public eye. Obama: The Affordable Care Act, or “Obamacare,” a very public tug of war involving gun control, commuting sentences for 944 nonviolent inmates (more than the last 11 presidents combined), campaigning for re-election, controversially approving the Dakota Access Pipeline and managing issues both domestic and abroad. James: dealing with the backlash of “The Decision,” his emergence as a willing spokesman on social issues, bearing the weight — fairly and unfairly — of his influence far beyond basketball, or one must-win playoff series after another with his place in basketball history hanging in the balance. Their lives are The Truman Show writ large. Their biggest curse? Living up to a legacy that’s still ultimately more of a working draft than a finished product.

They met when both were fueled by massive potential, with grander expectations from critics who wondered “Would talent ever surpass the hype?” On Thursday, James visited Obama at the White House for the third and final time — tied with his own teammate (in Miami and Cleveland) James Jones for the most of any NBA player during the Obama era.

A buzzing community of reporters, photographers and camera crews scattered around outside the White House last Thursday. Media tents were stationed off to the side, but a great majority of media professionals lined the pathway near the front of the White House leading to a press room and the South Lawn. Many were there to cover James and the Cavs. Even more walked the heavily secured lawns as they covered the first face-to-face meeting between the president and president-elect Donald Trump.

The meeting was a reportedly “excellent” 90-minute exchange. But feelings of shock and tension still very much lingered in the air. The day before, Obama congratulated Trump in a news conference and said that he looked forward to a seamless transition of power. Vice President Joe Biden, customary of the last eight years, stood alongside his close friend and running mate and, at one point, made the sign of the cross. Obama believed what he was saying. He does want Trump to succeed — a la James and Dave Chappelle — but only if it means the betterment of America, not just the betterment of certain pockets or classes of people.

But Obama didn’t believe in what he was saying. Only days earlier he’d all but dropped to his knees like a ’90s R&B singer, pleading with America not to place Trump in a position of unmatched worldwide power and influence. The final weeks of the campaign — an ugly and contentious sprint to Election Day — led to what felt like Obama’s most vulnerable moment. And, if his words from earlier this year are to be taken at face value and applied to the present day, maybe, he momentarily lost faith in the American public. He swore, after all, it would not allow Trump to happen.

Wisps of clouds interrupted the monotony of a gorgeous blue sky. Light laughter permeated the chilly air. Cigarette smoke, too. The vibe, despite the hustle and bustle of the day, was eerily calm. Even as protests to deliver Trump his own classic catchphrase from The Apprentice — “You’re fired!” — erupted in cities such as New York, San Francisco and Chicago. Even as a surge in racial taunts using the election as its inspiration further exposed very real divisions that appear to be widening.

Obama needed this moment with the Cavaliers. Perhaps we all did. It was a temporary escape from the fact that in a little over two months, he’ll hand the keys — and nuclear codes — over to a man who once questioned the legitimacy of his very residency in this country. A man whose name first lady Michelle Obama refused to say in the weeks leading up to the election. A man whose connection to the African-American community is so nonexistent his team uses MediaTakeOut as an olive branch. And a man whose new chief strategist, Stephen Bannon, has been called a “legitimately sinister figure” by ex-colleagues, a domestic abuser and anti-Semitic by his ex-wife, and the driving force behind Breitbart News becoming a white nationalist propaganda nerve center by hate-watch groups.

One would have to forgive Obama if he saw the ceremony with the Cleveland Cavaliers as a reprieve. Basketball and Obama have been linked nearly from the moment he became a national public figure. It’s a game that has become as much part of his presidency as, say, his must-see sets at White House Correspondents’ dinners. And according to Richard Jefferson’s Snapchat, the White House basketball court will be changed to a croquet/polo ground.

“His determination,” the president said of the three-time Finals MVP, “makes him one of the great players of all time.”

After nearly a two-hour wait posted in front of the White House, doors opened and staffers escorted the media to its assigned location. The ceremony went on without a hitch on the South Lawn — directly across from the Rose Garden and Oval Office — the same location that houses the annual Easter egg hunt, Halloween trick-or-treat throwdown and South by South Lawn. All places the first family have used to portray some semblance of normalcy since 2009 as they lived lives that were anything but routine. The Cavaliers, who brought their significant others, kids and parents with them, Obama and Biden all received standing ovations from the sea of invited guests. His usual engaging self, the president cracked jokes and offered praise.

That Cleveland finally winning a championship is the hope and change he ran on eight years ago.

That Iman Shumpert’s most impressive possession occurred away from the court when he helped his wife Teyana Taylor deliver their baby on a bathroom floor. And used headphones to cut the umbilical cord.

That Kyrie Irving’s game-winning shot was, is and always will be as cold-blooded as we all remember it.

That Kevin Love had an out-of-body defensive experience guarding MVP Stephen Curry in the waning moments of Game 7.

That Richard Jefferson is the inspiration for the AARP crowd that Obama gladly finds himself in these days.

That the Cavs defeating the Warriors actually did him a solid. The victory ensured his hometown 1996 Chicago Bulls would remain the greatest team of all time, a comment that elicited laughter from the audience, Biden, the Cavs and even media members.

That the Cavaliers’ commitment to community involvement moved him, highlighting the team’s donation of $23 million over the past 20 years to local charities.

And that its players represent the growing surge of activism in sports, citing Love’s commitment to ending campus sexual assault and James’ pledge to higher education.

To the surprise of no one on the South Lawn, the commander in chief saved his finest praise for James. “His determination,” the president said of the three-time Finals MVP, “makes him one of the great players of all time.” Obama ended Thursday’s ceremony with the traditional team picture. He held up his customized jersey and joked he wasn’t much of a fan of the sleeved versions. James, who isn’t either, and ripped the sleeves on his during a game against the New York Knicks last November, shot back, “I got you.”

But the climate of America outside of the small bubble that was the South Lawn wasn’t lost on anyone. James and Smith had previously expressed their sentiments about a Trump-led America. There were whispers about the president looking a combination of exhausted and frustrated. A member of the press, taking in the moment as attendees filed out, pleaded solemnly Please pray for this country.

There were whispers about the president looking a combination of exhausted and frustrated.

For a nation facing myriad questions in the coming weeks and months, asking will the Cavaliers return to the White House should they repeat falls laughingly low on the totem pole. But it is still worth asking, and one already under speculation. The country and every life in it is on the cusp of change. Or maybe a regression back to the norm, depending on who’s asked.

But who knows? If the Cavs are blessed enough to go back to back, maybe James does take a page from Russell and hits the snooze button on his next White House visit. Maybe the tradition — of NBA champions visiting the White House — died last week, and we just don’t know it yet. As this entire campaign and election cycle has shown, any and everything is possible.