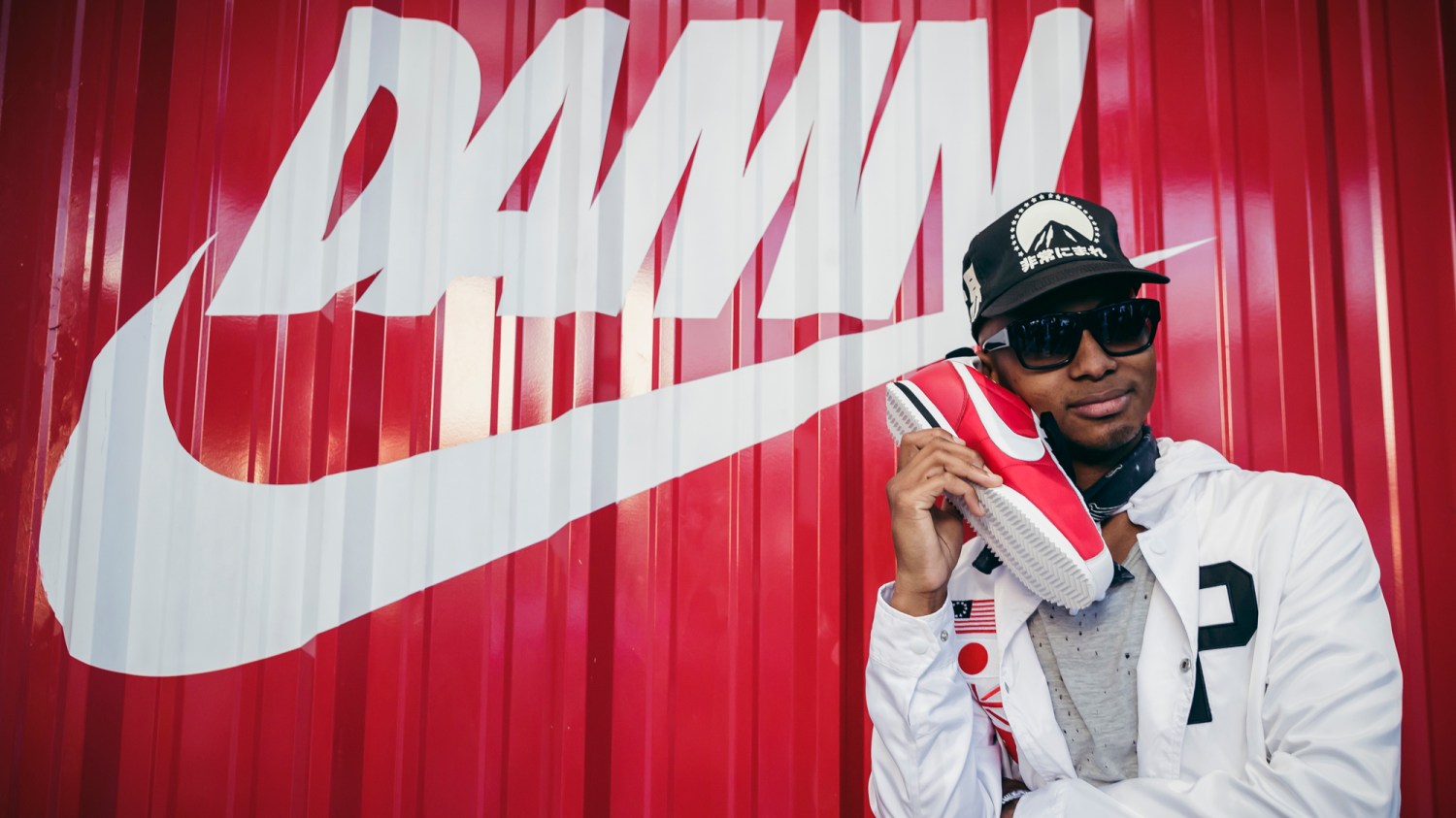 the1point8 for The Undefeated
Sneaker Stories

LOS ANGELES — The hottest stars on the planet, from the worlds of basketball, entertainment and fashion, descended upon the City of Angels for the 2018 NBA All-Star Weekend. And they brought the hottest shoes they could get on their feet. The festivities of the weekend — from pop-ups from the biggest brands in the sneaker industry to spontaneous concerts to the celebrity all-star games, the actual NBA All-Star Game, and even the lead-up practices — was a cultural explosion when it came to sneakers. These are the top 24 (shout-out to the greatest No. 24 in L.A. history, Kobe Bryant) pairs we saw at All-Star Weekend, along with the stars who made them shine.

LeBron's pregame shoes feature his message from throughout the week. (via @NBAAllStar) pic.twitter.com/XF2QbdTnon

LeBron James was named the MVP of the All-Star Game, and we’re also declaring him sneaker MVP of the weekend. Heading into practice before the game, he debuted a low-top version of his Nike LeBron 15, as well as a red, white and blue player exclusive (PE) edition of his first signature sneaker, the Nike Air Zoom Generation. On Instagram he broke out another Air Zoom Generation PE — this one designed with black pony hair and a glow-in-the-dark sole. His pregame All-Star shoes were a custom pair of “More Than An Athlete” Air Force 1s — a nod to the recent critical comments about the world’s greatest basketball player from Fox News’ Laura Ingraham. And last but not least, on the court at Staples Center during the All-Star Game, he rocked a regal pair of Nike x KITH LeBron 15 PEs, featuring rose and vine stitching and gold embellishment fit for a king. God bless Nike, KITH and James for delivering all this heat.

Took care of @QuavoStuntin with custom Huncho Curry 4s and Culture Brons for each half of the Celebrity All Star game this weekend. Thanks to @MrBrando3 and the @FinishLine family for tagging in for this one. #AllStarWeekend pic.twitter.com/nzpdlxWDvH

Quavo took home the trophy as MVP of the NBA’s Celebrity All-Star Game after balling out in not one, but two pairs of custom kicks. With the help of Finish Line, and famed sneaker artist Dan “Mache” Gamache, the rapper a part of the hip-hop trio Migos wore Nike LeBron 15s and Under Armour Curry 4s, both of which were inspired by the supergroup’s No. 1 album Culture II. We caught up with Mache, who discussed his process of bringing the specially designed “Culture Brons” and “Huncho Currys” to life.

From afar, it looked like pop star Justin Bieber was wearing a pair of Off-White Air Jordan 1s while running up and down the court in the Celebrity All-Star Game. But actually, he donned the Fear of God All-Star Pack, crafted by L.A.-based designer Jerry Lorenzo (the son of former Major League Baseball player and coach Jerry Manuel).

Customization was a theme of the weekend, especially for Nike. And one of the brand’s biggest athletes, New York Giants wide receiver Odell Beckham Jr., couldn’t leave L.A. without getting in the lab and getting his custom on. The end product? A red pair of OBJ Air Force 1s, which he swagged with a red and white Supreme x Louis Vuitton shoulder bag on the sidelines during the All-Star Game.

Kanye West made a surprise appearance at Adidas’ #747WarehouseSt in his “Blush” Yeezy Desert Rat 500s. The shoes were also available at the event to the public in limited quantities through a raffle. Shout-out to everyone who got a pair.

Xbox One X is paying homage to the iconic #AirJordan III with 3 custom consoles. And the best part? You can win one for yourself: https://t.co/dDNZyJI50u pic.twitter.com/WKDkUvDscO

It’s been the year of the Air Jordan 3, and Xbox is riding the wave. On Feb. 16, the video gaming brand announced that three limited-edition consoles — inspired by the “Black Cement,” “Free Throw Line,” and “Tinker Hatfield” 3s — will be given away to three fans through a Twitter sweepstakes taking place from Feb. 16 to Feb. 21. 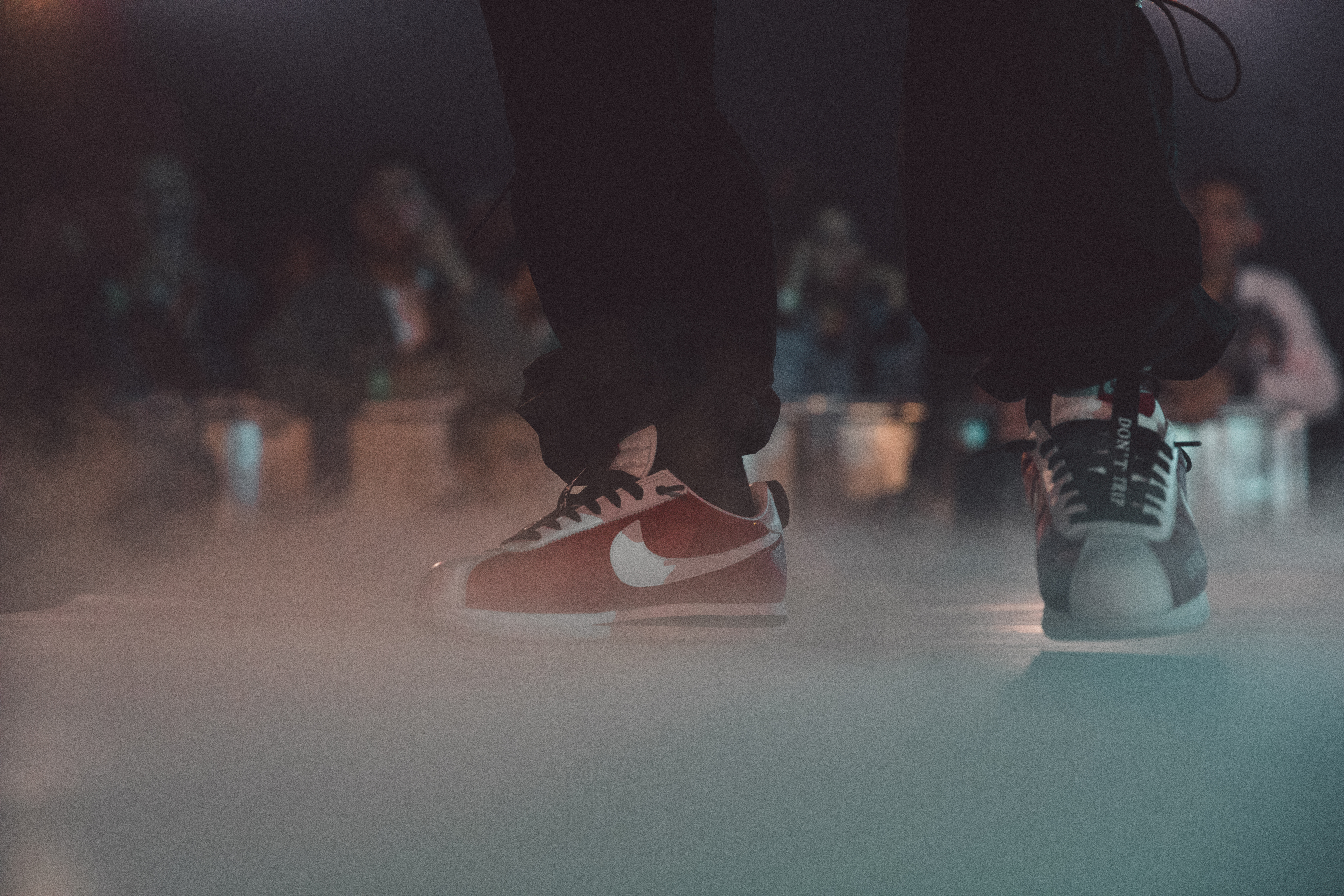 Nike x UNDEFEATED have the collaboration of the year so far, with the Zoom Kobe 1 Protros that were released to the public in a camouflage colorway at an exclusive pop-up in L.A. during the weekend. Toronto Raptors star, and Compton, California, native DeMar DeRozan wore a mismatched pair of the Protros — one green camo shoe and one PE red camo shoe — during the All-Star Game. We also saw pairs of PEs from Giannis Antetokounmpo of the Milwaukee Bucks during the Celebrity All-Star Game, and Devin Booker of the Phoenix Suns during the 3-point shootout.

To: Usher
From: Tinker

Yes, that is Usher wearing a pair of Air Jordan 5s, signed by Tinker Hatfield, the greatest designer in the history of sneakers.

Today was a good day. They came out with new Dames. (@2chainz voice)#Dame4 Bapes drop today at the @adidas #747WarehouseSt space in Downtown LA. pic.twitter.com/4zoGkeDCGh

Portland Trailblazers All-Star point guard Damian Lillard is endorsed by Adidas and is a huge fan of the Japanese streetwear brand BAPE. So this weekend, he brought us the BAPE-inspired Adidas Dame 4 in camo, red and black. Simply beautiful.

There have been reports for quite some time that Nike and Kyrie Irving would be coming out with a new and affordable basketball shoe separate from his signature line. It appears to have arrived. On the practice court before the All-Star Game, Irving broke out the unnamed sneakers, which honor the Boston Celtics with the words “Boston” and “Pride” featured on the outsoles, as well as the years of Boston’s championships on the laces. Look for this shoe to eventually drop at rumored retail price of about $80.

One pair of Dwyane Wade’s Li-Ning All-Star Way of Wade 6s, which were unveiled and presented to fans in limited-edition fashion through a raffle on Feb. 17, went to this little girl. What a moment.