The unbearable whiteness of ‘Oklahoma!’

In new Broadway revival, the blinding sunshine of the Territory exposes the violence beneath the romantic myth

Though it hasn’t always been acknowledged, Rodgers and Hammerstein’s Oklahoma! has always been a musical about whiteness.

This is important because a new and well-reviewed production is now running on Broadway. Oklahoma! has often been summarized through a lens of racial neutrality as a romantic musical about a woman named Laurey Williams trying to make a choice between two suitors: Jud Fry, a hard-working farmhand who lives in the smokehouse of a farm owned by Laurey and her Aunt Eller. And guitar-strumming Curly McClain, who is more socially adept, but doesn’t offer much beyond a pretty face. Set in the Claremore Indian Territory of Oklahoma in 1906, Oklahoma! delivers a rose-tinted view of history that centers on happy white people whose greatest concern is a town dance that will raise money to build a new school. It’s a classic example of willful erasure and ahistorical mythmaking.

In 1838 and 1839, President Andrew Jackson forced thousands of Native Americans to abandon their homes east of the Mississippi. Even though Oklahoma was the end point of the genocidal forced migration known as the Trail of Tears, Oklahoma! doesn’t feature a single Native American character. In fact, its only explicitly nonwhite character is Ali Hakim, a Persian peddler who seeks romantic encounters that don’t come with marital strings.

Director Daniel Fish’s new, stripped-down revival of Oklahoma! doesn’t play by those rules, though. In this version, now running at Circle in the Square Theater through Jan. 19, Laurey is played by a black woman, Rebecca Naomi Jones. Laurey’s best friend, Ado Annie, is played by Ali Stroker, who uses a wheelchair, the first actress to do so on a Broadway stage. When Stroker won the Tony for best actress in a featured role in a musical in June, she was the first performer who uses a wheelchair to be nominated, much less win.

That’s because this version, which faithfully maintains the original script and lyrics of the 1943 musical while updating the orchestrations with modern arrangements, subjects toxic whiteness and masculinity to the glaring bleach of the noonday sun.

Oklahoma! provides a nuanced opportunity for audiences to reexamine systems of power from the view of those least protected by them.

The revival is unique because of its deft interrogation of the whiteness and toxic masculinity that has long been romanticized in the American western, and in the many treacly iterations of Oklahoma! that have been mounted since 1943. This version asks its audience to consider a familiar world in an unfamiliar way: through the eyes of a black woman with little to no physical security or power of her own.

The first thing one notices upon entering Circle in the Square is the aggressive brightness of the room’s lighting (more than a few members of the audience wore sunglasses through the performance). The second is that the walls are lined with racks upon racks upon racks of shotguns.

The lighting turns out to be subversive. Much like a black light held over the surfaces of a sketchy motel room, it illuminates all the ickiness lurking on surfaces that appear otherwise innocuous. It welcomes you to the Oklahoma territory, where flowers fill the prairie and the june bugs zoom, and then it ensures that you cannot turn away from the ugliness that lurks there. “Everything’s going my way” certainly applies to the men of the Territory. But its female residents? Not so much.

It’s strange to see Oklahoma! when the horrors of mass shootings (most recently in Dayton, Ohio, and El Paso, Texas) are still in the shallow recesses of one’s consciousness. But mostly, I was reminded of violence specifically linked to virulent misogyny, and so Alek Minassian, Elliot Rodger, and George Sodini entered my mind within minutes of the introduction of Jud (Patrick Vaill). Minassian, Rodgers, and Sodini are white men who committed mass murder because they were angry, lonely, and felt entitled to attention from women when they weren’t getting it. Minassian identifies as an “incel,” or involuntary celibate.

There is a rhythm to the news of mass shootings, and one beat in particular is frustratingly metronomic: The killers, more often than not, have a history of abuse or antipathy toward women. In Oklahoma!, Jud is armed with an unshakable crush, a shifty attitude, and a revolver. Vaill imbues Jud with a patina of gentle shyness, underneath which beats a familiar pulse of resentment, entitlement, and a violent temper precariously held in check. Jud might be an excellent farmhand, but he is not a good man. It makes for a terribly dangerous combination for Laurey.

To survive in the modern world, women develop a spidey sense about men who would potentially harm us, and we mold our lives around the avoidance of male aggression. We move to a different subway car if someone stares a little too long, or brushes up a little too close. We slow our gait to let someone pass rather than take the chance that he may be following when we must walk late at night. And we get very good at managing — managing expectations, managing tempers, and managing egos.

The same reality of ever-present male danger is true for the women of the Territory. For them, the most effective way to guard against it is to get married. (Nothing sucks the romance out of courtship quite like knowing you’re seeking a man in hopes that his presence will prevent your rape or murder.) Laurey has a decision to make about who she will choose for the dance and her life afterward: Curly or Jud? By Laurey’s second interaction with the seemingly mild-mannered Jud, I felt my stomach grow queasy with worry. Oda Mae Brown from Ghost made an entrance in my notebook: “Laurey,” I wrote furiously, “You in danger, girl!”

Before Fish reimagined her, Laurey was usually portrayed as a lucky woman blessed with a surfeit of romantic possibilities. Nowhere is that more clear than in Fred Zinneman’s 1955 film adaptation. In Zinneman’s Oklahoma!, Laurey is played by Shirley Jones, a sunny, self-assured blonde whose good looks, tiny waist, and homespun charm are enough to tame any man.

When Shirley Jones sings “Many A New Day,” she’s surrounded by white women pirouetting in bloomers and petticoats, and she’s laying out a philosophy that Ellen Fein and Sherrie Schneider would come to monetize some four decades later in The Rules, possibly the worst self-help book about dating ever published. Essentially, it is a doctrine that tells women that all their power and moral authority lie in their sexual availability or lack thereof, also known as playing hard to get.

But this display of performative reluctance isn’t an indication of power, so much as the lack of it, especially when you consider the presence of armed threats like Jud. From the beginning of the musical, Aunt Eller is telling Curly how much her niece likes him, no matter how much Laurey’s behavior indicates the opposite. It’s strategic: Aunt Eller’s trying to provide some security for Laurey, in the limited way that she can, by playing matchmaker. Sexual violation is a constant threat for women, even for Ado Annie, who is generally portrayed as a ditsy, well-meaning slut with her rendition of the song “I Cain’t Say No.”

Stroker’s Ado Annie, on the other hand, delivers a rollicking, proudly sex positive rendition of the song, a recognition of the character’s agency.

Still, in both scenarios, Ado Annie’s choices are protected by her father’s ever-present shotgun — to a point. She may get around, and she may like it, but she’s still got to marry somebody, and furthermore, someone with money. Ado Annie’s father insists that a man vying for her affections have at least $50 to his name before he’ll let him marry her. (Remember, it’s 1906.)

Laurey doesn’t really have two viable options so much as she’s faced with making a choice between a man who will almost certainly kill her if he doesn’t get what he wants and a well-meaning dunce who thinks the height of being gentlemanly means getting down to the dirty business of dispatching the Territory’s resident incel.

Jones is not the only member of the Oklahoma! company who is black, but her blackness serves to reinforce just how vulnerable and disenfranchised Laurey is in a place where men hold an overwhelming amount of sociopolitical power and women have nearly none. That social order is enforced and maintained with guns:

Jones plays Laurey as a woman moving through the world with tense, uneasy reluctance. At times, she exhibits an attraction to Curly, but it never seems to permeate too deeply, perhaps with the exception of the dream ballet (danced with magnetic athleticism by Gabrielle Hamilton) that explores Laurey’s subconscious. It concludes with Laurey’s id scooching crotch first offstage toward Curly — she’s made her “choice.”

But even when Laurey agrees to marry Curly and enters the stage in her wedding dress, she’s bereft of the glowing, floaty ebullience typically associated with brides. Instead, the subtle hesitations in Jones’ movements and the drawn expression of her face leaves the viewer wishing poor Laurey had a trusted maid of honor to ask, “You OK, sis? I got the horses in the back if you want to ride east ’til we can’t ride no more.” It’s a beautifully crafted performance, full of simmering internal contradictions that Laurey dare not raise aloud. She seems more resigned than anything to spend her life with Curly, if only because he provides protection from the Juds of the world and she knows that she needs it.

For Mo’ne Davis, her first year at Hampton was a winner, though it ended abruptly Read now 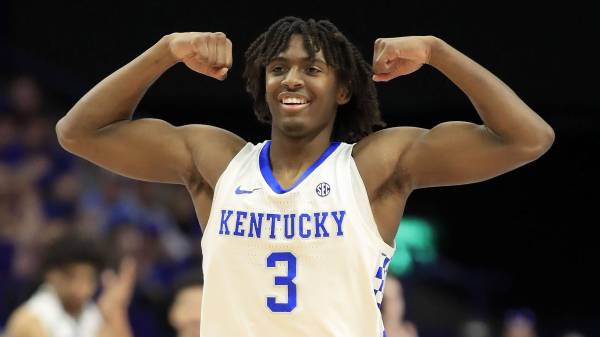 Kentucky’s Tyrese Maxey on entering draft: ‘My game was ready to go to the next level’ Read now

I could not help but see parallels between Laurey and the protagonist of Test Pattern, a new film from director Shatara Michelle Ford that premiered earlier this year at BlackStar Film Festival and is currently seeking distribution. Test Pattern explores the aftermath of sexual assault for a black woman living in Austin, Texas, named Renesha. Renesha (Brittany S. Hall) is in a loving interracial relationship when she is sexually assaulted during a celebratory night out with a friend. (Coincidentally, the two works share an actor; Will Brill plays Hakim in Oklahoma! and Renesha’s boyfriend Evan in Test Pattern.) Like Laurey, Renesha ends up spending a great deal of time managing the emotions of two white men, one of whom is ostensibly “good” and the other who is “bad.” It turns out the two men are not so different. Like Jud and Curly, they both prioritize their own wants over the needs of the black woman who is the object of their desire or devotion. This is not accidental. In both the Territory of 1906 and modern-day Austin, the world is constructed to serve these men, and that’s what they’ve come to expect. This is their version of neutral.

Oklahoma! becomes a jaunty horror show when Laurey is splattered with Jud’s blood on her wedding day after Curly guns him down and the entire company belts out a lively rendition of “Oklahoma.” The residents of the territory ignore the cancer infecting their community in favor of singing, dancing, and the avoidance of discomfort, in much the same way that no amount of tragic deaths seems to spur meaningful action on gun control.

Ultimately, Oklahoma! provides a nuanced opportunity for audiences to reexamine systems of power from the view of those least protected by them. The artists will even serve you chili and cornbread during the show’s intermission. The timing is key — better to eat a bowl before pore Jud is daid, when its contents can’t remind you of his bullet-blasted innards.

Soraya Nadia McDonald is the culture critic for The Undefeated. She writes about pop culture, fashion, the arts, and literature. She's based in Brooklyn.