CTE and head injuries are terrifying, but the team dynamics help the whole family

I have learned to dread the month of August. The sticky, swampy heat that blankets Washington, D.C., doesn’t bother me much, nor do I dread the countdown to summer’s end. Like many parents, I’ll trade a stretch of 90-degree weather for the peace, quiet and order of having my children where they belong: in a classroom.

Every day in August, my son Blake, 12, suits up in pads, helmet and mouthguard for football practice in his 115-pound division in our local tackle league. It’s his third year in the league, and his first playing slot back on offense and defensive end for the team. Weekly scrimmages have started, game films are being watched and studied, and updated copies of the head coach’s playbook arrive in my email inbox on the regular.

To be clear, I’m not a fan of Blake playing tackle football. His father (my ex-husband) and I argue about it every year — before, during and after the season. The risks for kids getting hurt are too great, I say, especially as they get older and play against bigger, faster and meaner opponents. My ex and I agree that the data about chronic traumatic encephalopathy (also known as CTE, a degenerative brain disease found in athletes, military veterans and others with repetitive brain trauma) and neurological injuries in professional players are horrific. Recent findings by Boston University are terrifying: CTE was found in the brains of nearly all of the deceased professional football players studied. More and more professional football players, as well as athletes in other sports, are now refusing to let their own children play tackle.

To be clear: I’m not a fan of my son playing tackle football.

Yet, despite weeks of arguing, pleading and attempts at bribery, I gave in. I’m once again on board the tackle train. Why? Because Blake loves the game and wants to play. And my ex makes a valid point that the game of football has changed since we were kids. He says it’s being taught differently, and measures are in place to avoid excessive hitting, especially during practice.

Still, my elder son, Cole, went on the record years ago about hating tackle, much to the dismay of every football coach we’ve ever met. Cole is a 6-foot-5, 190-pound bruiser at age 14, but he’s made no bones about not liking the violent contact required by the sport. Good to know, my G. Because if you hate hitting or being hit, football cannot be your thing. 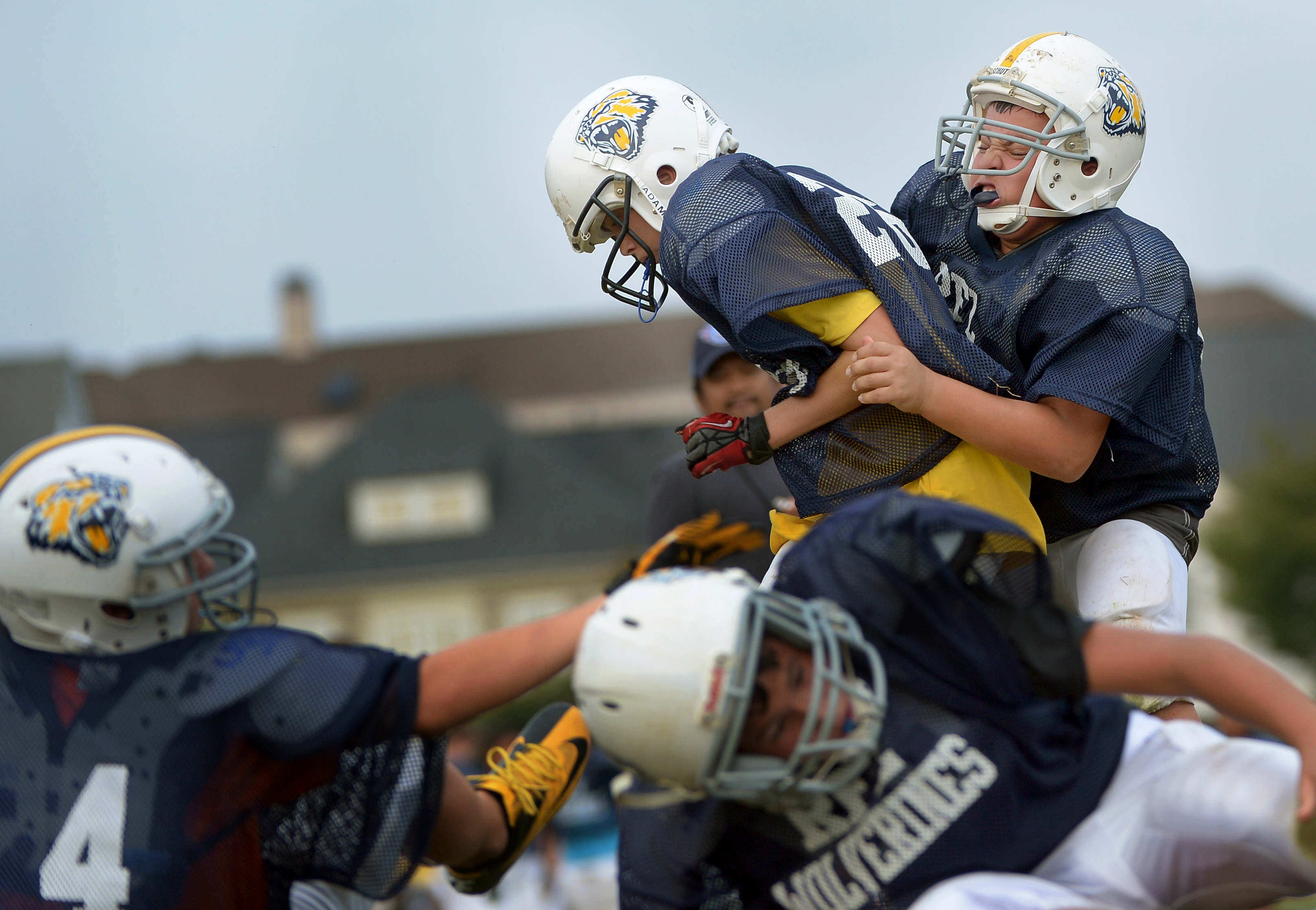 The problem is that there are few sports that can guarantee a zero risk of injury, including gymnastics, cheerleading (it apparently ranks very high in catastrophic sports injuries), baseball, lacrosse and soccer. Just this past season, two of Blake’s AAU basketball teammates got concussions after diving for loose balls and hitting their heads on the hard court. That’s one more than his football team suffered all last year. Head injuries happen in sports, obviously. One friend’s 16-year-old soccer-obsessed son got a concussion from a header during a game. Doctors eventually inserted a permanent metal rod into his right arm after two bad breaks from rough play. Another friend’s son played rugby at Middlebury College; his on-field concussion was severe enough that he has since quit the sport for good.

Mama has been seated on the sidelines for the past two seasons chasing a Xanax with peppermint latte.

But while Mama has been seated on the sidelines for the past two seasons chasing a Xanax with peppermint latte, football has been teaching Blake valuable skills. He’s learned about teamwork, pushing through emotional pain, being a gracious loser and sticking together with colleagues through adversity. He has respect for the trustworthy older men who are coaches and assistant coaches. As an African-American woman, my concerns for my black sons can be overwhelming. Having additional adult role models in my “village” helps ease my anxiety (somewhat) about the risks to teenage boys, including racial strife, unethical police and judicial officers, and the high rates of drug use among black youth.

Another upside to letting the lad play tackle football? What he’s not doing. The hours that Blake spends on the field at games and practice are hours away from a television and cable TV, wireless devices and social media.

Talking to Blake about getting injured while playing football turned out to be a great opportunity to discuss things we often take for granted, such as good health and true sportsmanship. Seeing a whole team take a knee on the field when a player is hurt can be profoundly touching. It’s the type of kind, empathetic gesture I wish happened in many other areas of our daily lives.

But I don’t need a list of excuses to let my kid play football. I’m not a head-in-the-sand kind of mother. I balance worry with being the kind of parent who is mindful and encouraging. At least until next summer when the battle begins again. Maybe that’s the summer Mama wins.