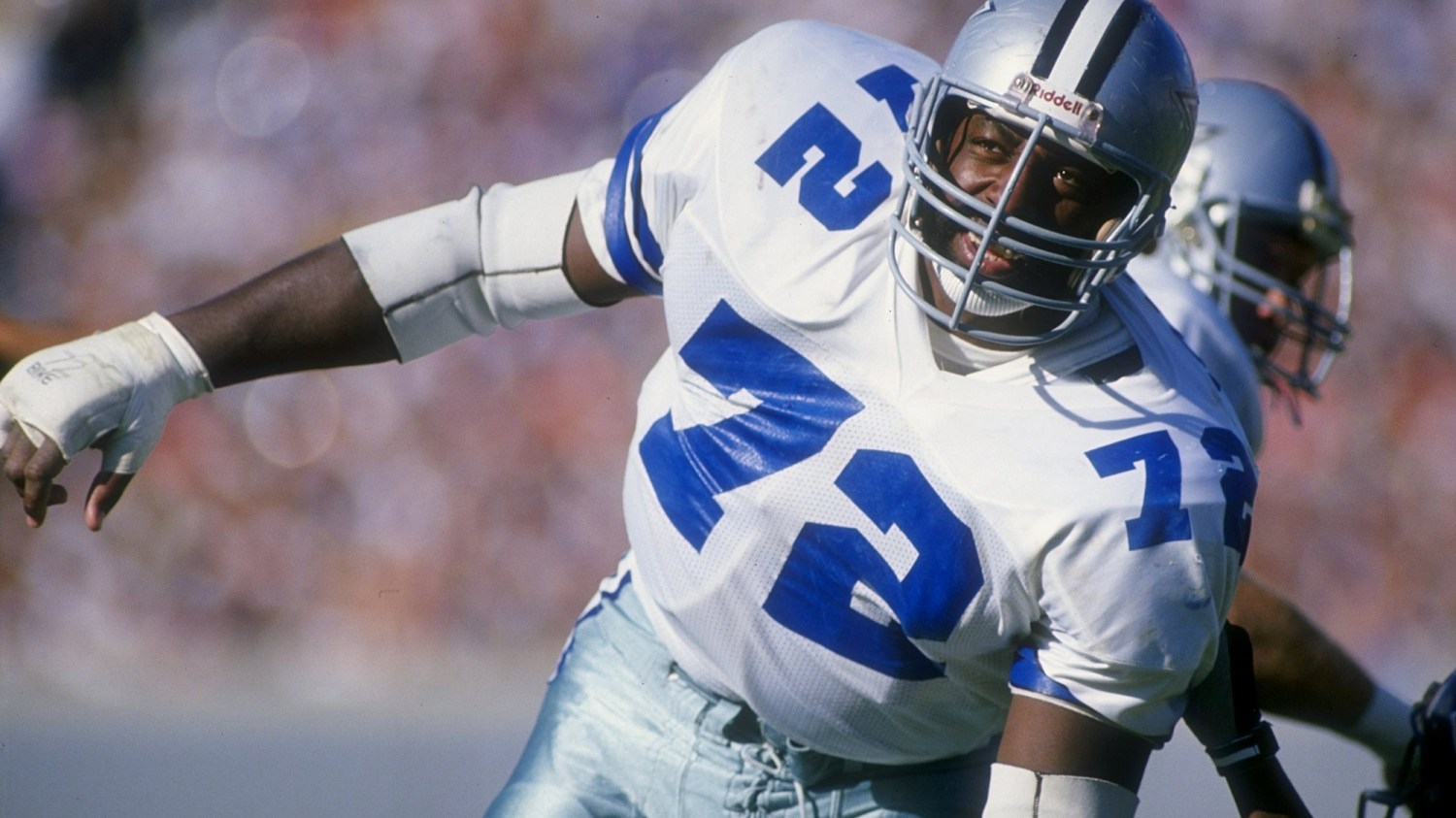 Defensive end Ed (Too Tall) Jones of the Dallas Cowboys in action against the Chicago Bears during a game at Soldier Field in Chicago, Illinois. Getty Images
The Next Chapter

‘Too Tall’ Jones: ‘Pay the price with hard work’

It’s hard to miss the 6-foot-9 man weighing about 250 pounds walking through the lobby of the famed Peabody Hotel in Memphis, Tennessee. Ed “Too Tall” Jones, a member of the Dallas Cowboys’ famed “Doomsday Defense,” gets noticed.

He was in Memphis last weekend to put on his annual golf classic in collaboration with the Southern Heritage Classic weekend, which features a big football game between Jackson State University and Tennessee State University.

“This is the 27th for the Classic and the 25th year for the Ed Too Tall Jones Golf Classic. I absolutely love it because it’s Tennessee, and I have a home 83 miles from here in Jackson, Tennessee, that I still maintain,” Jones told The Undefeated.

The game and the classic give Jones the opportunity to see people he only sees once a year from his hometown and his alma mater, Tennessee State.

He likes it “not only because I get to see family and friends, but also because it does so much for the community here in Memphis. Every community needs a Southern Heritage Classic and I’m just glad to play a small role in it.”

Jones participates in the entire weekend, and his favorite parts of the three-day event are the concerts.

“I say that because I’m not a very good golfer. I’ve never won my tournament. I don’t golf with consistency. I’d be a much better golfer if I played more. It’s very time-consuming. I have so many excuses because of my height. It’s not an advantage at all being tall and playing golf. It was for blocking passes in football, but not hitting a golf ball, because there’s so much room for error. But nobody enjoys the game more than I do, because that four or five hours, regardless of what’s happening in my life, whether it’s positive or negative, I don’t think about it. So I think everybody needs an escape, and golf is escape, and golf is my escape.”

In 1974, the Dallas Cowboys had the No. 1 overall draft pick for the first time in their history. They selected Jones out of TSU, which he said was one of the proudest moments of his life.

“Going to a Division II school, being the first lineman ever drafted No. 1 overall, is mind-boggling to me,” Jones said. “Here I am a country boy from Jackson, Tennessee. The first overall pick made me so proud.

“The first thing the Cowboys told me was to call my mom, who didn’t know anything about football. I called mom and to hear her say, ‘I am so proud of you,’ knowing my mom didn’t really know what happened. She was such a big disciplinarian and you didn’t get compliments like that from her. It made the hair stand up on my head to hear her say that. It also made me very proud.”

Jones is a proud grad of a historically black college (HBCU) and doesn’t mind giving back.

“I wouldn’t be sitting here talking to you today had I gone to a Division I school to try and play football, because they wouldn’t have had the time to work with me. I was a very raw talent. So by going to Tennessee State, I will always be indebted to HBCUs. That’s why I go out of my way to recruit for them. That’s why I’m glad when I was in school you had to stay four years. It took four years for me to develop. HBCU schools are the best to me because they give opportunities to people like me.”

Jones played baseball, basketball and ran track through his childhood years and in high school. It wasn’t until his brother-in-law recognized that he could use his size and agility on the football field that he considered that sport seriously.

“He said, ‘You need to play football, you’re a football player.’ I was thinking, ‘I don’t know anything about football.’ We didn’t have football,” Jones said. “My high school couldn’t afford the insurance for football.”

Jones’ brother-in-law became his mentor. He had earned scholarship offers to schools all over the country for baseball and basketball and had settled on Arizona State. After his father died, his mentor told him he should go to Tennessee State, which is two hours away from his hometown, to be closer to his mother.

He was a mere 6-foot-7 back then. The staff at Tennessee State told him he would be the tallest person in the game of football at the time and they really wanted him to play basketball and baseball. But he was determined to play football.

Staff warned him about the risks of the game. He was told that most injuries are knee injuries and they often occur in the fourth quarter when fatigue sets in. He was told that if he was lucky enough to make the program at Tennessee State, he’d have to be the most conditioned athlete to protect his knees due to his height.

Jones was committed to a rigorous workout program. He said he was always the first player to work out and the last one to leave. He not only worked out with the football team, but with the baseball team as well.

The defensive lineman became a two-time All-American and the team lost only two games under head coach John Merritt. They won championships in 1971 and 1973. Jones ranks third in school history in sacks in a season (12) and fifth in career sacks (38).

Being drafted to the Cowboys was a dream come true for Jones. He was the first player from an HBCU to go that high in an NFL draft. He’d been a Cowboys fan growing up and remains one to this day. “We didn’t have a professional team in Tennessee during that time and I grew up on a farm. We only got to see the Cowboys or the St. Louis Cardinals, Arizona Cardinals now. Well, Dallas was winning, so we got to see the Cowboys a majority of the time,” Jones added.

Transitioning from college into the pros was fairly easy for Jones.

“My attitude was I’m the toughest, biggest, baddest on the block,” he said. “That was my attitude throughout my career. That’s why I retired with a year left on my contract. It got to the point where after 15 years, I didn’t get excited about practice. I didn’t get excited about bringing material home and studying. And when you lose it mentally, you better get out. I’m so glad I had a long career. I got out on my own terms. I never heard that knock on the door from a trainer.”

Jones has taken notice of the recent protests at pro football games during the national anthem by San Francisco 49er Colin Kaepernick and other NFL players and he believes that they have every right to do so if it’s coming from the heart.

“If there is something you truly believe in, then speak out about it, and speak volumes and live it. Today’s athletes, because of social media, they really have it made when they want a voice to be heard. It’s a lot easier now for leaders to come forward. Athletes now are finally realizing that when they speak, they speak volumes about any social issue regardless of what it is.”

Jones looked up to several athletes, including football great Deacon Jones, basketball star Oscar Robinson and famed boxer Muhammad Ali, whom he got a chance to meet. He has a signed glove on display in his home. The glove is unique because it was not signed with a permanent marker and the signature is distorted from the bleeding of the marker.

If Jones could’ve given his younger self some advice, he’d tell the adolescent to work hard.

“From the minute your parents drill in you about the importance of education, you can’t decide too soon what it is you want to do in life and pay that price for it. Realize, too, that nobody is going to hand you anything. I’d say all these things to myself. Nobody’s going to give me anything. I’m going to have to prepare myself and work hard for everything I achieve.”

As at a tennis player and fan, he was glued to this year’s US Open and watched Serena Williams as she lost in the semifinals.

“She’s one of the best. One of the most dominant ever. I saw Steffi Graf play her first tennis match in Florida. And I knew she was going to be special. But Serena took it to another level. I think we’ve seen the best of her. Whether she wins or loses now, I hope she goes out on her own terms. If you are a young lady out there, regardless of what sport, and you see what she’s accomplished, it’s gotta be inspiring for those young girls.”

Jones got involved in business during his years with the Cowboys. He invested in a lot of different ventures before retiring from football in 1990.

“I didn’t think I’d be around. Little did I know, I’d play 15 years. So I was already established in business when I walked away from the game, so that transition was very easy for me. I haven’t missed it. Even though Dallas is struggling, I’m still a big fan. We haven’t done anything in 18 years. I’m still at peace with myself because I’m not sitting watching the game thinking there is something I can do to help,” he said.

“I went from fast-food chains, real estate, tax service, promoting concerts, just getting involved in as many things as I could. Until this day we have bought and sold things.” He’s launching a social media company in January 2017.

“I will never retire and I try and keep as many irons in the fire as I possibly can and I absolutely love it. I played with very smart coaches who wanted to fool your opponents, so we had to study a lot. That was one of the things our coaches taught us. If you want a career here, you’ve got to work hard, study hard, you got a career here. When you’re involved in a lot of different things, it’s the same thing. I took the same attitude that I had on the football field into business.