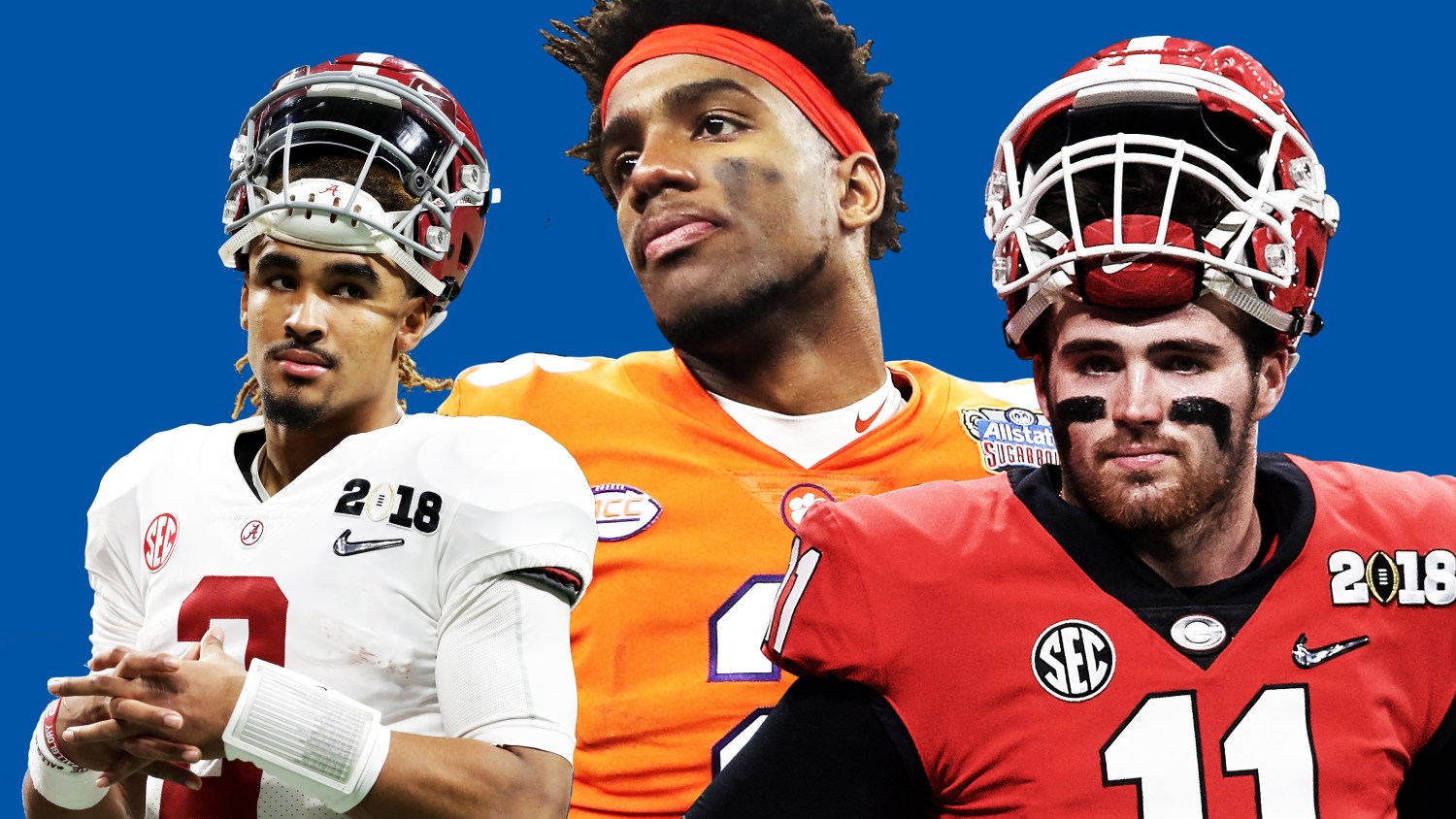 As the new college football season kicks off, I imagine a football made of question marks and dollar signs spiraling through the air. As always, the biggest questions surrounding big-time college football involve risk and reward: Is the game too dangerous to play and, if so, what, if anything, can be done about it? Should the players, unsalaried apprentices in the multibillion-dollar enterprise, be paid directly and how much? After all, they can be injured at any time. And the big-boss coaches can demote, if not fire them, at any time, too, potentially jeopardizing millions of dollars in future earnings for the players.

This season, each of the top three teams in the 2018 preseason Top 25 poll has an incumbent quarterback starter who has faced a challenger for his position.

Despite going 26-2 over two seasons and leading his Alabama team to two straight trips to the FBS championship games, Hurts faces a serious challenge from sophomore Tuanigamanuolepola “Tua” Tagovailoa. He replaced a faltering Hurts in last season’s championship game and brought the Crimson Tide to victory over the Georgia Bulldogs, 26-23. Fromm, a rising sophomore who showed real promise in his first year (24 touchdowns and just seven interceptions) was on the losing end of the Alabama rally in the championship game. Now, after suffering a broken bone in his non-throwing left hand, he has to beat back Justin Fields, an incoming freshman with a strong arm and quick feet. He was Mr. Georgia Football, an accolade Fromm has won, too.

Meanwhile, Kelly Bryant, a senior at Clemson, is poised to begin his second year of starting. He’s waited his turn behind Deshaun Watson, now of the Houston Texans in the NFL. Bryant is a dual threat quarterback: Last season, he threw 13 touchdown passes and ran for 11 more. He faces the challenge of Trevor Lawrence, a freshman passer, who has been called a “once in a generation player.”

Alabama, Georgia and Clemson are so stocked with great players that each team could contend for the national championship, no matter who starts at quarterback.

But it will matter a great deal to someone like Hurts, if he’s goes from being the starter to mopping up for Tagovailoa. It’s likely that Hurts, who has thrown 40 touchdown passes and just 10 interceptions in his two years as a starter, will seek to attend another college, where he can start and star, boosting his NFL stock. Hurts is on schedule to graduate this school year and could go to another school as a graduate transfer and play next season.

If that happens, Hurts will join a growing list of itinerant college quarterbacks who’ve played at more than one school before landing in the NFL, including Cam Newton (Florida and Auburn), Russell Wilson (North Carolina State and Wisconsin) and Baker Mayfield (Texas Tech and Oklahoma).

(As of early morning Aug. 24, Alabama had made no announcement about the starting quarterback for the Sept. 1 opener against Louisville. Coach Nick Saban has suggested both his talented quarterbacks could play in that game.)

Big-time college football is a sumptuous game, filled with pageantry, tradition and rivalries. It’s played across the country. Still, it’s a sport that speaks with an accent and sensibility that’s redolent of the old American South, a region that became rich off centuries of unpaid labor. Today, it’s the unsalaried labor of its big-time college football players, many of whom are African-American, that helps the region rule the sport.

The perennial powers in big-time college football benefit from having rosters bulging with great players. After all, you never know when one of the program’s stars will be injured, become embroiled in scandal or fail in the classroom. You never know when one of your big-time players will shrink in the face of the demands of the big game, as Hurts did during last season’s championship game.

Still, the abundance of star players means even elite players must play their games while looking back to see who might be gaining on them on the depth chart, who might push them to the bench or from the program.

The head coaches such as Alabama’s Saban, formerly the coach at LSU, easily move from team to team in search of higher salaries, better players and more championships.

But for players seeking to move from one program to another, the message has been: not so fast. In the past, coaches have sought to restrict where their departing players could go. And underclassmen still usually have to sit out a year when they transfer.

The talk that swirls around the game from fans and sports commentators is often spirited and well-informed. But sometimes, when the debate over who should play and who should sit on the bench becomes fodder for the food fight sports TV talk shows, the humanity of the players is lost: the pressure the young men face, the emotional toll of losing a prized position, especially for quarterbacks.

Consequently, as a new season unfolds, let’s remember that starting and starring at the right college could mean the difference between young a man’s future NFL riches or a lifetime sitting on cracker barrels talking about what might have been and nobody listening.