As the nation’s No. 2-ranked girls high school player, Angel Reese has remained tough while playing with a target on her back — especially playing for St. Frances Academy in Baltimore, the oldest running black Catholic school in the country. So when Reese, a senior, was in tears late Tuesday, her mother was alarmed.

“I was sleeping when she came into my bedroom at about 11:30, and she was really upset,” her mother, also Angel Reese, recalled. “Then she showed me why.”

The 17-year-old Reese had become unnerved after seeing comments about her on a social media post.

Overtime women’s basketball Instagram page had posted a video clip praising Reese on Tuesday. But that post prompted the user of the Instagram account of an opposing coach to send a direct message to the Overtime WBB page, criticizing Reese and claiming her success was because she was “genetically blessed.”

Chloe Pavlech, who curates much of the Overtime women’s basketball content, was going through the messages when she discovered the message:

“Celebrating a player (w god given height and talent) and zero humility or impulse control. As a female coach of female high school ballers, I find this behavior repulsive, unacceptable, unflattering and unnecessary. You can have swag while not acting like a punk. Highlight some other girls in the conference who aren’t as genetically gifted …”

Pavlech found a second direct message from the coach’s account in response to a different video in December celebrating Reese:

“She’s not the greatest player that’s ever come out of this area. She’s genetically blessed. And lacks any humility. Guess you haven’t watched the film of her…” 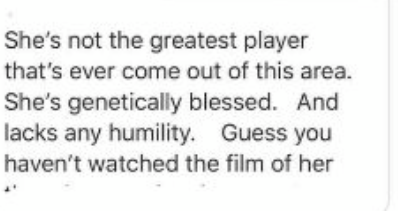 The area that was whited out (by Pavlech) is the coach referencing a fight that Reese was involved in during a scrimmage last season against a non-league opponent, an altercation that earned her a three-game suspension.

“Angel had to apologize in front of the student body, and she’s played this year knowing if anything else happened she’d be off the team for the year,” her mother said. “People come at her, but she plays at a college level against high school girls. When she steps on the court she doesn’t hold back. She’s going to go at you until you sit down.”

Pavlech took a screenshot of both messages from the coach and posted them on her personal Overtime Instagram page (that post, as seen above, has since been removed). Pavlech included her own message at the top of her Tuesday post: “Why do women try to tear down young girls?”

“I was shocked that an adult — especially a coach — would be talking about a young girl in that manner,” Pavlech said. “The context of those remarks was also surprising; she was DMing in response to a very positive video Overtime WBB had posted about one of the country’s most gifted young talents.”

The direct messages came from the Instagram account of Lisa Smith, who, as of Thursday morning, was listed as the head coach of Archbishop Spalding High School girls basketball team. Later Thursday, Smith’s name had been removed from the site, with athletic director Jeffrey Parsons now listed as the current head coach of the girls team. Reese’s mother told The Undefeated that the school had alerted her that Smith was fired from her coaching position.

The Undefeated reached out to Smith and Parsons and Archbishop Spalding principal Amy Cannon for comment, but messages were not returned.

The Undefeated also reached out to Susan Thompson, the executive director of the Interscholastic Athletic Association of Maryland (IAAM) — the league the two schools are members of — for comment. She replied via email: “I won’t be commenting on this. Please contact the respective schools.”

Reese’s mother had reached out to the Instagram account linked to Smith and notified the coach that she was going to report her to IAAM officials.

She received an apology from Smith.

“I am sorry that you were privy to my message. My intention was never to personally hurt or offend anyone when I sent the DM (privately) and foolishly never imagined that anyone other the [sic] curator would read them. But this is a painful lesson that there are, in fact, real people behind the IG name/account. With that said, I regret sharing my thoughts and actions. But moreso [sic] I deeply regret that I offended you and your daughter. I don’t expect your forgiveness- I’d likely respond the same if I were you. I do sincerely apologize.”

“Lisa Smith sent me an Instagram message to apologize about the situation, and so did Mr. Parsons,” Reese’s mother said. “The comments were inappropriate and, as a coach, I hold her to higher standards. I felt like she was slandering my daughter’s name, and by using words like ‘genetically and God-given talent,’ I feel like there were racial overtones in what she said. …

“If I hear something like that from another parent or player, that would have been fine because games are intense. I’m not comfortable with a coach saying that because I have no idea what she’s told her players, and what her players might do to my daughter.”

Reese averages 17.2 points per game for St. Frances, the nation’s 17th-ranked girls basketball team. In September, she announced her decision to attend Maryland next season.

The criticism has left Reese stunned.

“That’s a team that I played against for four years, and we just played them last week and I never had a problem with them,” Reese said. “It’s hurtful that someone would come at me in that way. I never try to hurt anyone. I just play hard.”

There’s a reason Angel Reese is #2 in the country. 💪 @shegotgameclassic pic.twitter.com/UK6mafM9aO

Reese’s mother added that many of the players in the league are the same height as Reese, who stands 6 feet, 3 inches.

“It’s not her height, it’s her skills that set her apart,” Reese’s mom said. “So to say that it’s genetics, those are clearly racial overtones.”

St. Frances was also in the news last year when its football team had to scramble to put together a schedule after they were dropped by the opposing schools in the Maryland Interscholastic Athletic Association (MIAA), which features many of the same schools in the IAAM. Opponents who had no problem playing St. Frances when the football team won only two games in 2015, suddenly didn’t want to play the East Baltimore school, citing “size and athletic disparity” and “player safety” as reasons.

Pavlech said she has no regrets in revealing the direct message on her page.

“Adults should be building children up, not tearing them down,” she said, “and women should’t tear down other women, especially young girls. That’s the last thing we want to teach our kids.”

Reese didn’t play when St. Frances won at Archbishop Spalding 60-53 on Jan. 6. The teams will play again on Feb. 7 at St. Frances.

Reese promises that the criticism from the opposing coach won’t affect the aggressive style of play that earned her Maryland Player of the Year honors last season.

“It bothers me that someone could come at me for the way that I’ve always been,” Reese said. “I’m just trying to put on for St. Frances and attempting to lift the status of basketball in Baltimore City.”