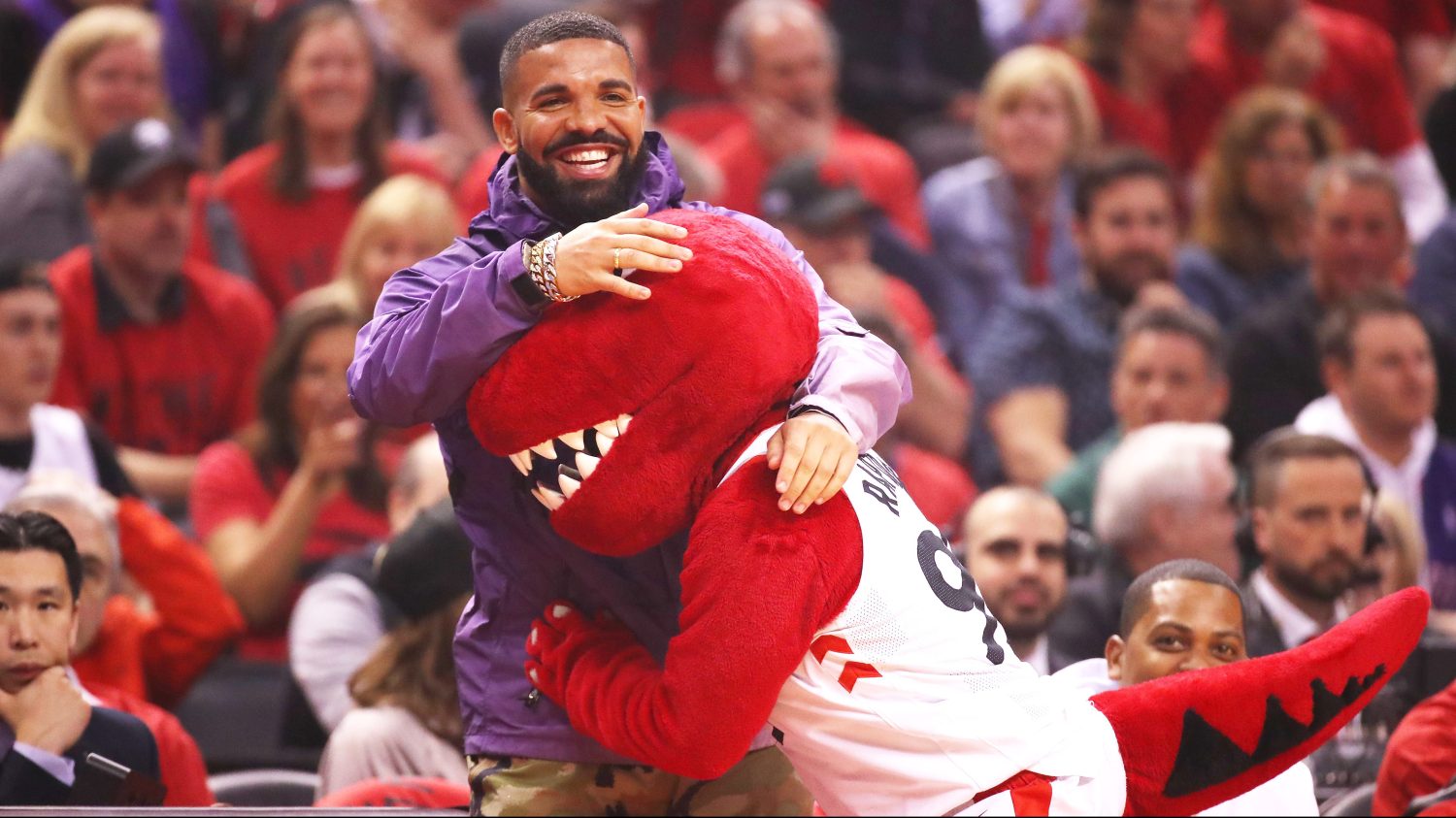 Rapper Drake attends Game 3 of the NBA Eastern Conference finals between the Milwaukee Bucks and the Toronto Raptors at Scotiabank Arena in Toronto on May 19. Gregory Shamus/Getty Images
Commentary

From trolling the Greek Freak to massaging Nick Nurse’s shoulders, Drake has made himself part of the Eastern Conference finals

There are many ways to look at Drake taking home the award for best supporting actor in a (postseason) drama. The great majority of which are true.

Are his courtside antics grating? Sure. Are they corny? Hilariously, yes. Was massaging Toronto Raptors coach Nick Nurse’s shoulders awkward? Yes, but it likely doesn’t even rank in the top 20 most cringeworthy moments of Drake’s career. Love and despise him, because people do both, his moment with Nurse was a quintessential “Drake going full Drake” moment.

Drake has long been a master at media manipulation and always understands where the camera is. The past week was nothing more than an affirmation. Has he officially taken the mantle as Spike Lee’s heir to most polarizing courtside celebrity? Yes. Drake is the NBA’s most recognizable overzealous superfan.

The Canadian rapper is back in the news for his imprint on the 2019 Eastern Conference finals. First, he helped Gucci Mane live up to his rhymes from “Both” — “I got so many felonies I might can’t never go to Canada/ But Drake said he gon’ pull some strings so let me check my calendar” — as the 1017 Brick Squad impresario, wearing a Giannis Antetokounmpo jersey, took in Game 3 on the wood at Scotiabank Arena. Their 2016 collaboration, not so ironically, was certified three times platinum this week. Then he mocked, taunted and laughed at the Milwaukee Bucks superstar for missing free throws and waved goodbye. On Tuesday during Game 4, he gave Nurse that eye-opening in-game massage, which ignited a firestorm of debates over etiquette and conduct. Drake’s now public enemy No. 1 in the Cream City for simply being, well, Drake. The superfan who acts just like a superfan, only he’s one of the most recognizable people in the world.

The entire shtick is equal parts objectively annoying (to the other team and his critics) and artistically hilarious. It was no surprise to see the series take a turn for the petty Thursday night in Milwaukee. Mallory Edens, the daughter of Bucks’ owner Wes Edens, was seated courtside next to Green Bay Packers quarterback Aaron Rodgers wearing a Pusha T t-shirt. The nod to the Virginia MC was a flashback to a year ago when Drake found himself behind the eight ball for the first time in his career with a heated and highly personal beef with Pusha that involved Drake’s son, a rumored adidas deal gone awry and a picture of Drake in blackface. Eden’s wardrobe was a solid response — the franchise’s best rebuttal so far — that was diluted by the Bucks’ 105-99 defeat, which put them one loss away from elimination.

“There’s certainly no place for fans — or whatever Drake is for the Raptors — on the court,” Bucks head coach Mike Budenholzer said on a Wednesday conference call. “There’s boundaries and lines for a reason.”

Antetokounmpo’s former European agent carried the same energy. “Imagine a gig & an athlete on VIP seats, right next to the band, stands upon the stage just to show off during the entire game, knowing cameras are on him, occasionally even massaging the singer,” Georgios Dimitropoulos, a senior executive at Octagon, said in a since-deleted tweet. “Security & him both allow it. Never seen anything as disrespectful as this before …”

Drake responded via Instagram through a series of emojis and a live broadcast that showed him liking a comment in support of his actions. And following Toronto’s Game 5 victory, Drake took to his Instagram Stories to poke fun at Budenholzer and the younger Edens, telling the latter, “All is far in war and war and trust me I’ll still get you tickets to OVO Fest.” Anyone familiar with Drake and how he moves understands this is all part of the blueprint. Just as he remained strategically silent about Kanye West’s demands that he dispel rumors of an affair with Kim Kardashian last year, Drake didn’t directly address Budenholzer’s or Dimitropoulos’ comments, allowing the pendulum of media momentum to stay in his court. For now, at least.

There are three undeniably important days in the Raptors’ 24 seasons. The first was June 24, 1998, when the team traded No. 4 pick Antawn Jamison to the Golden State Warriors in exchange for the fifth pick, Vince Carter. The second came 20 years later when the Raptors traded Toronto favorite DeMar DeRozan for Kawhi Leonard on July 18, 2018. And the third was Sept. 30, 2013, when the Raptors named hometown kid turned superstar rapper Aubrey Drake Graham as their global ambassador. If it sounds ridiculously foolish, it’s only trumped by how ridiculously accurate the job title has since become.

Despite a season of adverse player-fan interactions, many of which had racial undertones, Drake’s courtside antics do little to affect the league or the Raptors negatively. He didn’t violate any sort of NBA policy for his interaction with Nurse. And judging by its past actions, the league isn’t giving Drake a hometown pass.

In 2014, the Raptors were fined $25,000 after Drake made what the league considered a public recruiting pitch to Kevin Durant, who attended his OVO Festival in Toronto. Last year, both the NBA and the Raptors warned Drake about his behavior after a verbal confrontation with then-Cleveland Cavaliers center Kendrick Perkins.

Drake vs. the Bucks is yet another twist in Drake’s interest in sports. The games and the athletes who play them are frequent muses in his music. And being recognized in a Drake song is pop culture gold. “I made it, I made it,” said Stephen Curry, quoting Draymond Green’s excitement over being name-dropped in Drake’s “Summer Sixteen.” “ ‘First All-Star Game and I got into a Drake song.’ ”

The flip side is that the internet will never let Drake live down his air ball — while in the layup line! — during Kentucky’s 2014 Big Blue Madness. Then there’s the Drake curse, which has allegedly affected the likes of Serena Williams, Conor McGregor, the Alabama Crimson Tide, the aforementioned Kentucky and others. Some New York Giants fans blamed him in part for wide receiver Odell Beckham Jr.’s mercurial moods. As coincidence collided with fate, Drake sat courtside at Game 5 of the 2016 NBA Finals when Kyrie Irving and LeBron James each went for 41 points — and kick-started the greatest comeback in NBA Finals history. But the hex was so deep even Drake believed in the energy as he wore Philadelphia 76ers shorts during Toronto’s Game 7 instant-classic victory earlier this month.

Like Lee, Drake is no stranger to the rush of vitriol against him. He’s also no stranger to inserting himself on to the NBA’s biggest stages. This marks the fourth consecutive postseason where Drake has become a subplot — others might say “antagonist” — during the playoffs. While taunting both Irving and James via, yes, Instagram in 2016, Drake watched his Raptors fall in six games — with James giving Drake an earful in the process. A year later, James not only again led the Cavaliers to victory over the Raptors in the playoffs, he offered to buy Drake margaritas after the game to soften the sting. In 2018, the tide temporarily shifted in Drake’s favor as he trolled John Wall and Kelly Oubre Jr. during Toronto’s first-round series victory over the Washington Wizards. This year, he taunted 76ers superstar center Joel Embiid, mimicking his airplane gesture in this year’s Eastern Conference semifinals.

All of the taunts, gestures and boisterous sideline dances could come back to haunt Drake should the Raptors fail to win either Game 6 or 7. And a new crop of Drake memes and GIFs will populate the internet. But understanding that Drake isn’t just a famous fanatic is part of the calculus in understanding why he acts the way he does. For starters, Drake’s not just a fan. “Been flowin’ stupid since Vince Carter was on some through the legs, arm in the hoop s—,” he reflected on “Weston Road Flows.” “I got a club in the Raptors arena,” he barked on his “30 for 30 Freestyle,” “Championship celebrations during regular seasons. F— all that rap-to-pay-your-bill s—,” he waxed on the Grammy-nominated “0 to 100/The Catch Up,” “I’m on some Raptors pay my bill s—.” This is a business investment.

His $7,000-per-year, invitation-only Sher Club (named after his maternal grandparents) sits inside Scotiabank Arena. Both Drake and the Raptors are donating millions of dollars to modernize local basketball courts and to Canada Basketball. Part of his “I’m Upset” video, which has nearly 100 million YouTube views, was filmed at center court of Scotiabank. Canada’s The Sports Network said Drake “is one of several factors responsible for legitimizing the organization in the eyes of the league’s primary demographic and many of its players.” Of those players, DeRozan said it was Drake who played the role of amateur therapist and helped him through the shock of being traded. “Just to hear the words that come from him being the person that he is in this world, especially in Toronto,” DeRozan said. And then there’s his overall economic impact on the city. A 2018 Vice News Tonight report concluded Drake is worth $440 million annually to Toronto’s economy, 5% of the city’s $8.8 billion tourism industry, because “he’s helped to rebrand the city. He’s kind of made himself the same as Toronto.”

None of this excuses anything Drake does from his courtside seat. But it gives some insight as to why. He acts the way he does because he’s fully aware of the weight his name holds in the city. He’s involved with the Raptors’ growth both financially and culturally. And he’s now part of the theater that the Eastern Conference finals have become because it’s no longer just about basketball. For some, there’s genuine joy in seeing Drake double down on his antics. For others, there’s pure disdain as they impatiently await his emotional downfall. But everyone feels some type of way. That’s a cultural moment. Drake’s got the sports world in their feelings.