Trae Young and the Hawks: ‘A whole new era of basketball swagger in Atlanta’

It wasn’t that long ago when Killer Mike would get occasional requests for Atlanta Hawks tickets. But with the Hawks winning again – and as popular as they were back in the Dominique Wilkins days in the 1980s – the rapper/activist, who owns a barbershop in State Farm Arena, now has friends frequently reaching out for tickets to the hottest show in Atlanta.

“The last couple years I would get a call every couple of months for Hawks tickets,” Killer Mike told The Undefeated on Wednesday. “I got at least 20 calls for tickets the last two days. That’s the difference. People want to see us win. People that are actually from Atlanta and not people who just moved here with their home team jerseys. What I’m starting to see is a lot less away jerseys at the games and a lot more Hawks jerseys.”

The Hawks missed the playoffs for three straight seasons from 2018 to 2020. This season got off to a rough start, too. Injuries to key players led to a 14-20 record and Atlanta relieving head coach Lloyd Pierce of his duties on March 1. Then the unexpected happened.

Under interim head coach Nate McMillan, the Hawks soared to a 27-11 record and rose from the 11th spot in the Eastern Conference to the 5-seed. With point guard Trae Young leading the way, Atlanta defeated the New York Knicks in the first round of the playoffs in five games.

Hawks fever reached an even higher level this week after Atlanta split the first two games on the road in its second-round series against the Eastern Conference’s top-seeded Philadelphia 76ers.

“People didn’t expect much from a team in the 11th spot when it all began,” Wilkins said. “Then Nate McMillan came in and put trust and structure in place. Now, the guys believe all that and they’re coming into the playoffs with unbelievable confidence. It’s great to see.”

Nationally, the Hawks are viewed as the least likely of the four remaining East teams expected to make the 2021 NBA Finals. But don’t tell Atlantans, who have been wearing Hawks T-shirts and jerseys around town. Game 3 at State Farm Arena is sold out, with rappers 2 Chainz and Quavo, Atlanta Falcons players and actor-comedian Chris Tucker all expected to be in the arena this weekend, a source said.

“It’s pandemonium here,” Wilkins told The Undefeated. “The fans have been so excited. The temperature is hot here, and for me it’s great to see that kind of energy.”

Many would argue that this is the most exciting time for the Hawks in Atlanta since Wilkins starred for the team as “The Human Highlight Reel.” 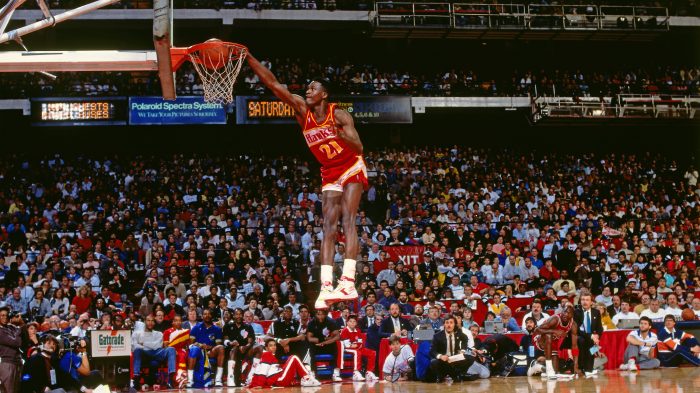 Wilkins averaged 26.4 points per game during 12 seasons with the Hawks while wearing his now-retired No. 21 jersey. The Hawks’ all-time leading scorer was known for his high-flying dunks and won two dunk contests. There is a statue of Wilkins dunking outside State Farm Arena.

Wilkins was not only popular in Atlanta, filling seats in the Omni Coliseum, but was popular with fans throughout the NBA.

While the Hawks have had some talented players since Wilkins, including fellow Hall of Famer Dikembe Mutombo, Mookie Blaylock, Joe Johnson, Al Horford and Josh Smith, Wilkins said there is “no question” that Young is the most exciting player to wear a Hawks uniform since he suited up.

“From a star player standpoint with Trae Young and what he helped create here, it’s truly amazing,” said Wilkins, now a television analyst for the Hawks. “He brings that entertainment. That’s what people want. Along with wanting to win, they want to be entertained. This little guy is something else.”

Coming off his first All-Star season in 2020, Young averaged 25.3 points and 9.4 assists per game. “Ice Trae,” as he has been nicknamed in Atlanta, is known for his deep shooting and clutch scoring. In the first postseason appearance of his career, he is averaging 28.9 points and 10.0 assists through seven games.

“We’ve had some great players,” said Killer Mike, “but in terms of the ability to ignite a fire under the audience, the fans that are watching, when you are talking about basketball, you’re talking about Dominique Wilkins and Trae.”

Killer Mike credits the players’ winning mentality and the Hawks ownership for the franchise’s current success. Tony Ressler, former NBA star Grant Hill and several other notable investors reached an agreement to purchase the Hawks in 2015 from a previous ownership group led by Bruce Levenson. Levenson’s decision to sell the Hawks came after he admitted to the NBA in 2014 that he sent a racist email in 2012.

“It starts with ownership and went down to the players and back to ownership,” Killer Mike said. “When we traded [Luka] Doncic for Trae on draft night [in 2018], the trade was for the swagger that Atlanta needed. I knew the kids would really get behind [Young]. I thought we would do something. But I didn’t know it was going to be this early and dynamic.” 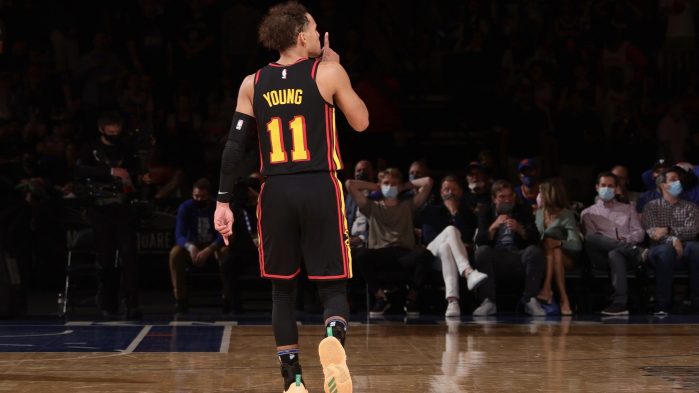 Young is surrounded by a talented group of players that includes Bogdan Bogdanovic, John Collins, Clint Capela, Danilo Gallinari, Kevin Huerter, De’Andre Hunter (who will miss the rest of the postseason with a knee injury) and Atlanta native Lou Williams.

Regardless of what happens with the Hawks this postseason, Killer Mike is confident that the future is bright for the NBA franchise in Atlanta.

“I would love for us to go all the way and win. But even if we don’t, we are going to be so pumped up for next season. This city will be on fire. This is the beginning of a whole new era of basketball swagger in Atlanta.”