Tyron Woodley always has Ferguson on his mind

Ahead of Woodley’s first boxing match against YouTuber Jake Paul, the 39-year-old reflects on the city that made him tough enough to win

Tyron Woodley hasn’t won an MMA bout in three years (four straight losses). He’s 39 years old in a sport where you might say 29 is pushing it. And, in just a few days, he will step into the boxing ring for the first time.

He’s an underdog, of course. But, despite the odds, fear of losing is the last thing on his mind.

“I grew up in environments and circumstances that are way more scarier than a fight,” Woodley said. “Fighting doesn’t give me any anxiety. My fear comes from underachieving and not doing my best.”

Woodley will certainly need his best come Sunday when he faces professional boxer and social media sensation Jake Paul, 24, in a bout to be televised at 8 p.m. on Showtime pay-per-view from Rocket Mortgage FieldHouse in Cleveland, Paul’s hometown.

Paul is 3-0, all by knockout: over YouTuber Ali Eson Gib, the second over former NBA player Nate Robinson and third, in April, over former MMA champ Ben Askren, a close friend of Woodley’s. In fact, Woodley was in Askren’s corner the night he lost to Paul.

“We started going back and forth talking [smack] after I knocked his boy out, and the fight [between me and Woodley] was on from there,” Paul said.

Woodley is by far better than Paul’s previous opponents. Woodley won 19 of 26 MMA bouts, had an impressive undefeated run from 2014 to 2018 and is a former UFC welterweight champion who held the title for three years.

“When we announced the fight, half of my phone calls were people wondering what the heck is Jake doing and the other half saying what a great challenge for Jake and this will give him a chance to display his skills,” Espinoza said. “That’s what you want, a competitive event with an unclear winner going in.”

But Woodley can be seen as a slight underdog in Sunday’s bout, with his recent string of losses, his age and because it’s his first fight in a boxing ring.

He claims a greater purpose.

“I’m an artist, and art is all things,” said Woodley, a rapper, music producer and actor who has appeared in several films, including Straight Outta Compton. “It can be music, television, MMA, boxing or wrestling. I never want to be limited. This is just another form of art I want to perform in, and I’m excited.”

Woodley grew up in Ferguson, Missouri, with 12 brothers and sisters. He played football and wrestled in high school, winning the state wrestling championship in 2000, which led to several college scholarship offers. Woodley accepted the offer to attend the University of Missouri.

But before embarking on his college wrestling career and living through the racial unrest in his hometown that drew national attention in 2014, Woodley experienced many of the same racial profiling issues that several Ferguson residents have reported.

Woodley said he’s been pulled over for “driving while Black” and harassed by police. He said he’s seen friends beaten by police.

“You can’t get away from being racially profiled in Ferguson,” Woodley said. “For me, it was how I responded. My mom did a really good job of instilling values and self-worth in me and my brothers and sisters. No one could tell me that I’m inferior.”

That self-pride followed Woodley to Missouri and helped him become the school’s first Big 12 Conference wrestling champion. He was a two-time All-American and posted a 110-38 career record. Woodley ranks third in school history with 10 career technical falls, and his 28 major decisions rank second in school history. He also earned academic All-Big 12 first-team honors as a senior. 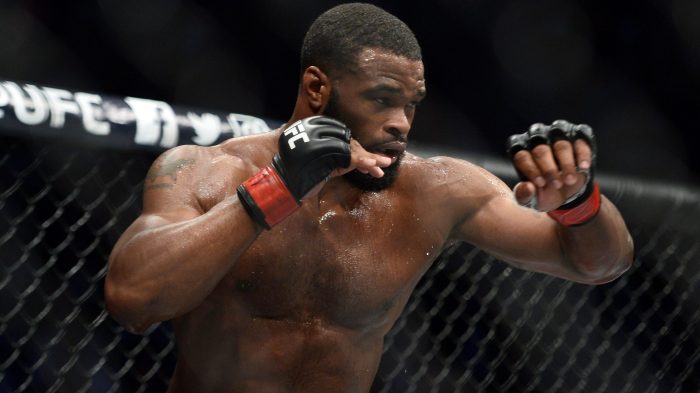 MMA champ Tyron Woodley is preparing for his fourth title defense, but it’s his life outside the cage that makes him a superstarRead now

Woodley turned pro as a mixed martial artist in 2009. He worked his way up through the ranks with his wrestling skills, but also developed a reputation as what is known as a solid striker. He knocked out seven fighters in his 19 wins. Woodley joined the Ultimate Fighting Championship in 2013 with a 36-second, first-round KO over Jay Hieron.

Woodley continued to climb and build his reputation as a formidable foe, but the events that transpired in his hometown shifted his attention.

Unrest in Ferguson followed the day after Aug. 9, 2014, when white police officer Darren Wilson shot and killed 18-year-old resident Michael Brown. The shooting and protests brought national attention to the shooting of unarmed Black men by law enforcement and the relationship between police and the Black communities they serve.

“I know those streets,” Woodley said. “I dated a girl where Michael Brown was killed. The riots happened near where I lived. I walked to that Walgreens that went up in flames. Many of those rioters weren’t even from Ferguson. They were from different countries and states who saw it as an opportunity to do some destruction. I wasn’t happy about that because the city where I grew up looked kind of messed up.”

Now, seven years after his hometown was in flames, Woodley said Ferguson is relatively quiet.

“Unfortunately, someone had to lose their life before we actually tried to make a stand and get some visibility nationally on law enforcement,” Woodley said. “But I’m guessing the city’s overly cautious and a lot of protocols have been put into place.”

The football team said it would boycott all football-related activities until Wolfe resigned. He stepped down two days later, on Nov. 15.

Woodley was proud of the stance.

“I was so dedicated to wrestling and reaching my athletic and academic goals, I didn’t have a lot of spare time to really get involved, but I’m glad the football players did,” Woodley said. “I’m glad they shed light on some of the racism that happens on college campuses.”

Woodley’s boxing career was stunted at an early age when his mother turned him away from the ring despite his interest while watching the older kids at the local boys club. As he got older, wrestling and football became his sports. The boxing bug returned once his college roommate (Askren) lost to Paul, and when the social media star accepted his challenge.

But the switch from MMA to boxing is and has not been easy for many who have tried. The most famous was Conor McGregor, who was carried by boxing legend Floyd Mayweather until Mayweather won by TKO in the 10th round. Anderson Silva has made the most successful switch. Two months ago, in only his third boxing bout, Silva defeated the more experienced Julio Cesar Chavez Jr. by a split decision.

Regardless of the past failures and successes of MMA fighters in boxing, Woodley took the necessary steps to prepare for this new venture by training with Mayweather.

“It was amazing,” Woodley said of working with Mayweather. “He’s a perfectionist and I learned so much. Now, I’m not going to share everything we worked on, but everything we did is beneficial for this fight.”

Some of those adjustments include Woodley’s change in his customary wrestling stance, which is square to be in a position to explode. One foot is in front of the other, compared to standing sideways in boxing.

“That’s probably been the biggest adjustment, the stance and the positioning,” Woodley said. “But I learn quickly, and I’m powerful and I’ve been battle-tested. I’m excited about the fight. I’m not out there for nothing, because eventually, I want to win a belt.”