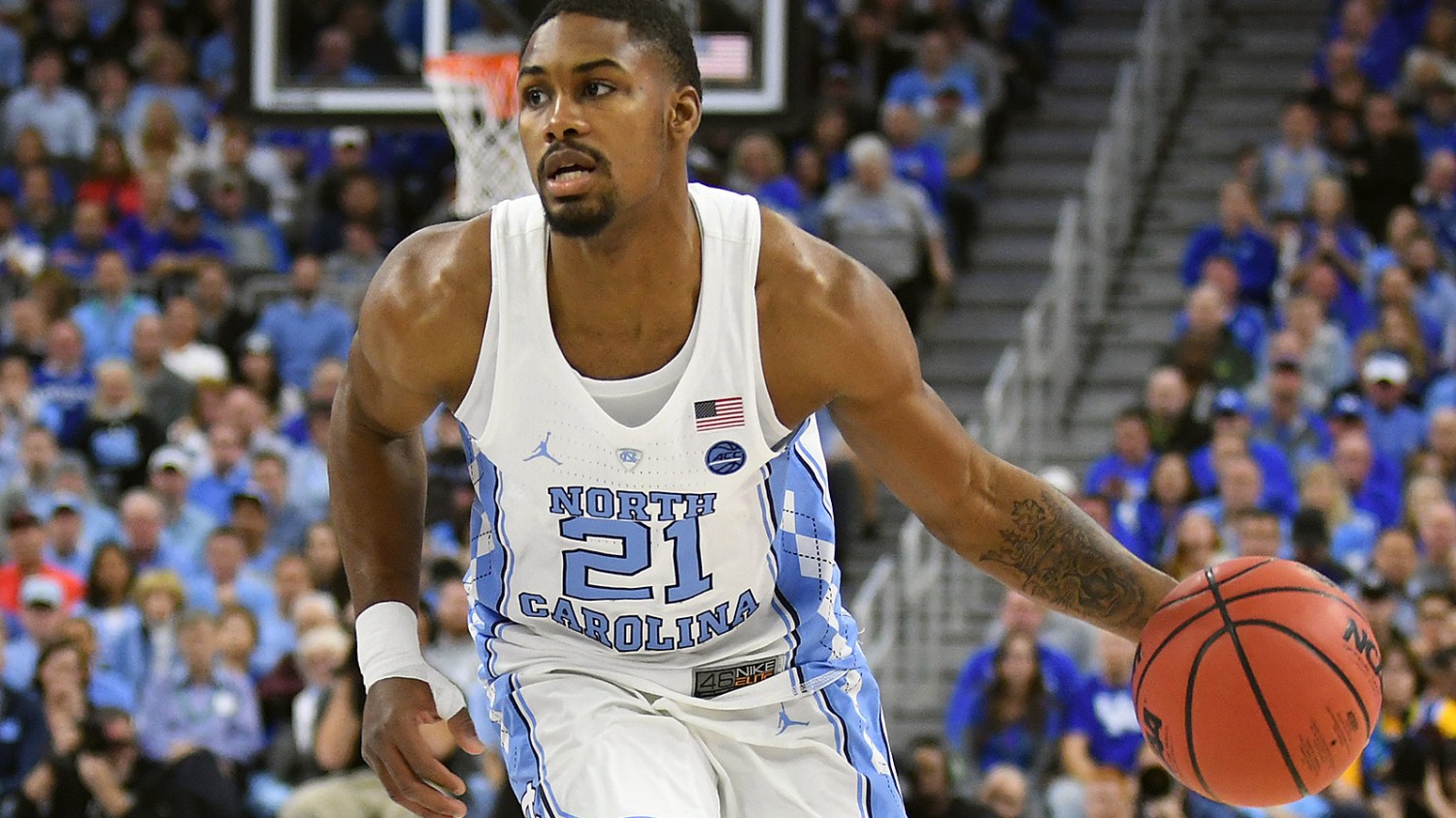 The visual will be forever embedded in Mark McClam’s brain: It was a winter day in early 2011, and he sat in the bleachers of Crayton Middle School in Columbia, South Carolina, watching his son’s seventh-grade game. It wasn’t much of a contest, as the visiting school, Alcorn, was overmatched. But suddenly an Alcorn kid jumped in the passing lane for a steal, drove the length of the court and rose up.

“This was an 11-year-old skinny kid in seventh grade, and he’s trying to dunk the ball and it goes off the back rim,” McClam said. “And he misses dunks off the back rim two more times in the game.

That kid, McClam would soon discover, was Seventh Day’Vonte Woods. Within a year, the two would be working together: McClam, a former point guard at the College of Charleston, had taken the head coaching job at the Hammond School a few months before Woods’ parents decided to place their son in a better academic environment.

Fast-forward to spring 2013, when a mixtape of Woods — then a ninth-grader playing his second year of varsity at Hammond — caught fire and made him a viral star. Four years later, it’s the most successful basketball mixtape on YouTube, with 14.8 million views.

The next season, Woods’ status as a high school sensation was further cemented when his dunk over an opposing player was voted ESPN’s Top Play of the Day on SportsCenter.

This week, Woods enters the Final Four as a freshman backup point guard with the North Carolina Tar Heels, averaging 1.6 points and 1.3 assists per game. With starter Joel Berry having sprained both of his ankles in recent weeks — he’s not expected to practice much before Saturday’s national semifinal against Oregon — there’s an outside chance that Woods could have a bigger role than the spot minutes he played for much of the season.

He’ll have to do better than he did against Kentucky on Sunday, when Woods picked up two quick fouls and was replaced by third-string point guard Stilman White. Woods played less than a minute and never got back in the game.

Was it a case of jitters on the big stage for the 6-foot-1 Woods? Perhaps.

But the high school teammates who watched Woods transform a small private school into the best team in the state, and a top 10 national ranking, don’t doubt his ability if he’s forced to take a bigger role this weekend.

“I’m excited about the Final Four this year, and the fact that our state is represented so well,” College of Charleston forward Chevez Goodwin said about his high school teammate, Woods, and the run of South Carolina, led by Sindarius Thornwell. “I’ve known Seventh since we were 4 and [South Carolina’s] P.J. Dozier for a long time. The fact that I’m going to turn on the TV in a couple of days and see both of those guys as part of the top four teams is incredible.”

Asked earlier in the tournament about his journey with the top-seeded Tar Heels into his first NCAA tournament, the reserved Woods simply said, “This whole experience is great.”

With a legend like Seventh Woods, it’s fitting that everybody has a favorite story.

Goodwin’s favorite was when they both were in 10th grade in a game against Ridge View High School. He was filling the lane on a fast break as Woods, wearing No. 23, was on the attack from the left wing.

“He leaps in the air several feet outside the lane, and I’m thinking this guy’s going to get hung up in the air because there’s no way he’s reaching the rim,” Goodwin said. “And he dunks it, hard. I had never seen anybody that age travel that far to dunk a ball. I’m on the court thinking, ‘He’s a freak of nature.’ ”

The favorite story from Xavier McDaniel Jr. — the son of former NBA great Xavier McDaniel, and now a freshman guard at the University of Texas Rio Grande Valley — comes from a 2013 holiday tournament in Raleigh, North Carolina, when Woods scored 23 points in a row in the fourth quarter, including seven 3-pointers, in a loss to Trinity Christian. He finished the game with 42 points.

“He just kept hitting one 3 after another,” McDaniel said. “One of the sickest performances I’ve ever seen in my life.”

McClam remembers the game at Spring Valley High School on Dec. 14, 2014, that featured two of the top players in the state going against each other, Woods and Dozier. The game sold out months in advance, and it was billed locally as the matchup of the decade.

On the morning of the game, Woods’ grandparents were both killed in a house fire. No one expected him to play.

But he showed up for the game. Then, after a team prayer circle before the game, he showed out.

“He gets 37 points, eight assists, eight rebounds and five dunks,” McClam said. “It was a spiritual day, and that performance was absolutely incredible.”

After the game Woods told reporters: “Tragedies happen, but you’ve got to play through it. They watched over me this whole game, and that’s the only reason I did it.”

Woods always delivered. But he was never that kid who rushed home to peep his latest accomplishment. Or boast about what he had accomplished.

“I hated all the attention,” Woods said when asked about the videos. “I hated it because I knew with all that attention, the expectations for me would be inflated. You can see guys get caught up in that and let that destroy them, so I never looked at the social media.”

Goodwin remembers hanging with Woods and watching the phenom study tapes of players such as Allen Iverson, Chris Paul and Kyrie Irving.

“I asked him one time if he ever watched himself, and he said never,” Goodwin said. “He told me that he couldn’t learn anything by watching himself.”

With Woods as the main attraction, Hammond emerged as a state power and its games became must-see events for basketball heads in the region.

“We’d get calls from Atlanta, calls from North Carolina — everybody wanted tickets,” McClam said. “You have to remember, this is a school that won a combined nine or 10 games in the two years before we got there, and all of a sudden we’re the biggest basketball attraction around.”

Few left disappointed after any game featuring Woods. To this day, Woods jumping over a Dreher High School opponent for a dunk is still a hot topic in the state.

“I was on the right wing, and I’m expecting him to dump the ball to me,” McDaniel said. “He took off from just inside the free-throw line and kept going up.”

That night, McDaniel was watching ESPN’s SportsCenter top 10 highlights and was stunned.

“They had his dunk on,” McDaniel said. “They called it ‘The Kid vs. The King’ and the dunk was the top play, over LeBron. I went crazy. It’s just so surreal to see your small school in South Carolina on ESPN!”

Woods, who was a two-time Mr. Basketball in South Carolina and was named the 2014 Gatorade Player of the Year in the state, was challenged nightly. Banged, bumped and verbally bashed, he never lost his cool.

“The closest thing I saw to trash talk was a game in my senior year when a kid stole the ball from Seventh, dunked it and said something as he came downcourt,” Goodwin said. “Seventh looked at him and smiled. Then he motioned for me to give him a screen and he gives a hesitation move on the guy, who slips, and goes in and scores a layup.

“As Seventh goes down court, he smacks the guy on the butt and says, ‘You gotta do better.’ And I laughed because I’d never seen him say anything to anybody.”

For Jacob Luksik, being a reserve on the Hammond team gave him the best seat in the house for the Seventh Woods show.

“A little school, mostly white, and we’d go into the gym of every top school and beat them all,” said Luksik, now a student at Clemson. “The fans would yell, ‘Private school boys!’ and ‘You’re soft, you’re not ready for this stage!’ It was great to walk out of a gym against a school that was embarrassed to lose to you.”

By the end of his high school career, Hammond was attracting players such as Goodwin and McDaniel, which allowed Woods to become a different player.

“He had to attack when he got there, but by the end he had some players to take some of the pressure off him and he became more of a facilitator,” McDaniel said. “All he wants to do is win, and he’s never been a ball hog or showoff. If you’ve never seen his YouTube videos, you would never guess that he’s as athletic as he is.”

On the eve of the NCAA Tournament, North Carolina coach Roy Williams was asked about Woods, who had battled knee and ankle injuries during his senior year at Hammond that affected his development going into his first year with the Tar Heels.

That led to limited usage and slow development for Woods.

“Just recently we’ve started seeing Seventh do the things that we thought he could do all along,” Williams said. “But because of his body and aches and pains and not being healthy, he lost some of his confidence there, and I haven’t been able to get him back to where I’d like for him to be confidencewise.”

With Berry banged up, though, there’s a chance Woods might get called on to play this weekend on college basketball’s biggest stage.

“My mindset hasn’t changed. I want to make the most of my minutes and just try to play hard,” he said. “I’ve been hurt, but I’ve learned that you have to be ready when your number is called.

“I’m happy for this experience,” he added. “This is the school I always wanted to be at, and Coach believed in me more than anybody else. I just think I owe him to go out there and play my hardest.”