Understanding the greatness of Gary Sanchez

When the New York Yankees and Alex Rodriguez messily split earlier this summer, manager Joe Girardi insisted the team was playing to win and that he was doing “what is right for the club and the organization.”

That was hard to believe, given that many Yankees had already been shipped off or lost in one form or another — Aroldis Chapman, Andrew Miller, Carlos Beltran, Ivan Nova, Nathan Eovaldi. But thanks in large part to 23-year-old catcher Gary Sanchez, the Yankees have been playing to win and doing so often enough to hang around the playoff hunt. On the last day of July, the Yankees were 5.5 games out of first place in the American League East and seven games back for the second wild card spot.

With a jumble of teams atop them in the playoff race, it’s still doubtful the Yankees will play in October, but they have found out something terribly important this season — they have a sensation whose greatness is difficult to overstate. He was called up on Aug. 3, but no player has put up a higher wins above replacement over the month of August than Sanchez.

That’s a loaded list of players Sanchez is topping. Kris Bryant, Mookie Betts and Corey Seager are all bona fide MVP candidates this season. It’s still just a month of games, so the sample size is small enough to warrant a disclaimer: *Attention*: Sanchez will probably definitely maybe not be this good forever.

Warnings aside, try not to be impressed by this: Only four other players have hit nine homers in the first 21 games of their careers. Then, Sanchez became the quickest player in MLB history to reach 11 home runs. In Yankees history, only Joe DiMaggio had more hits in his first 24 games than Sanchez’s 34. 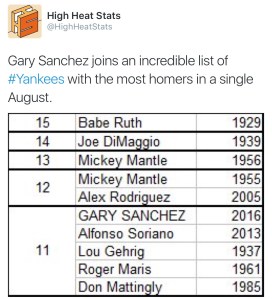 .@ElGarySanchez has hit his first 11 career home runs in 23 games, faster than ANYONE in @MLB history. https://t.co/LxYCVRE8jY

Gary Sanchez, in 86 career at-bats, already has more homers than 21 players with at least 10 times as many at-bats:https://t.co/Y56bethCaA

Just last week, Sanchez hit .522 with three doubles, five home runs and nine runs batted in, earning player of the week honors for back-to-back weeks, the first AL player to do so since Albert Belle in 1998.

Gary Sanchez is on a 73-homer pace over the 664 plate appearances that Barry Bonds had in 2001 if you're wondering how ridiculous Bonds was.

Most 100+ mph Batted Balls in August among Yankees:

“I think it’s hard not to look at Gary Sanchez and be somewhat in awe of what he’s done,” Girardi said this week.

How Sanchez originally found his way on the Yankees in the first place also provides a certain level of shock and awe. In 2008 when he was just 15 years old, Sanchez was alongside a couple of young prospects the Yankees were in the Dominican Republic to scout.

The group of kids eventually began a game, according to NJ.com. The goal: To hit a home run to right field, centerfield and left field.

Sanchez needed only four hacks to win the game and mesmerize his future employer.

“We didn’t have many other kids do that,” Mark Newman, the then-head of the Yankees farm system said.

Sanchez ended up inking a $3 million bonus with the Yankees in 2009.