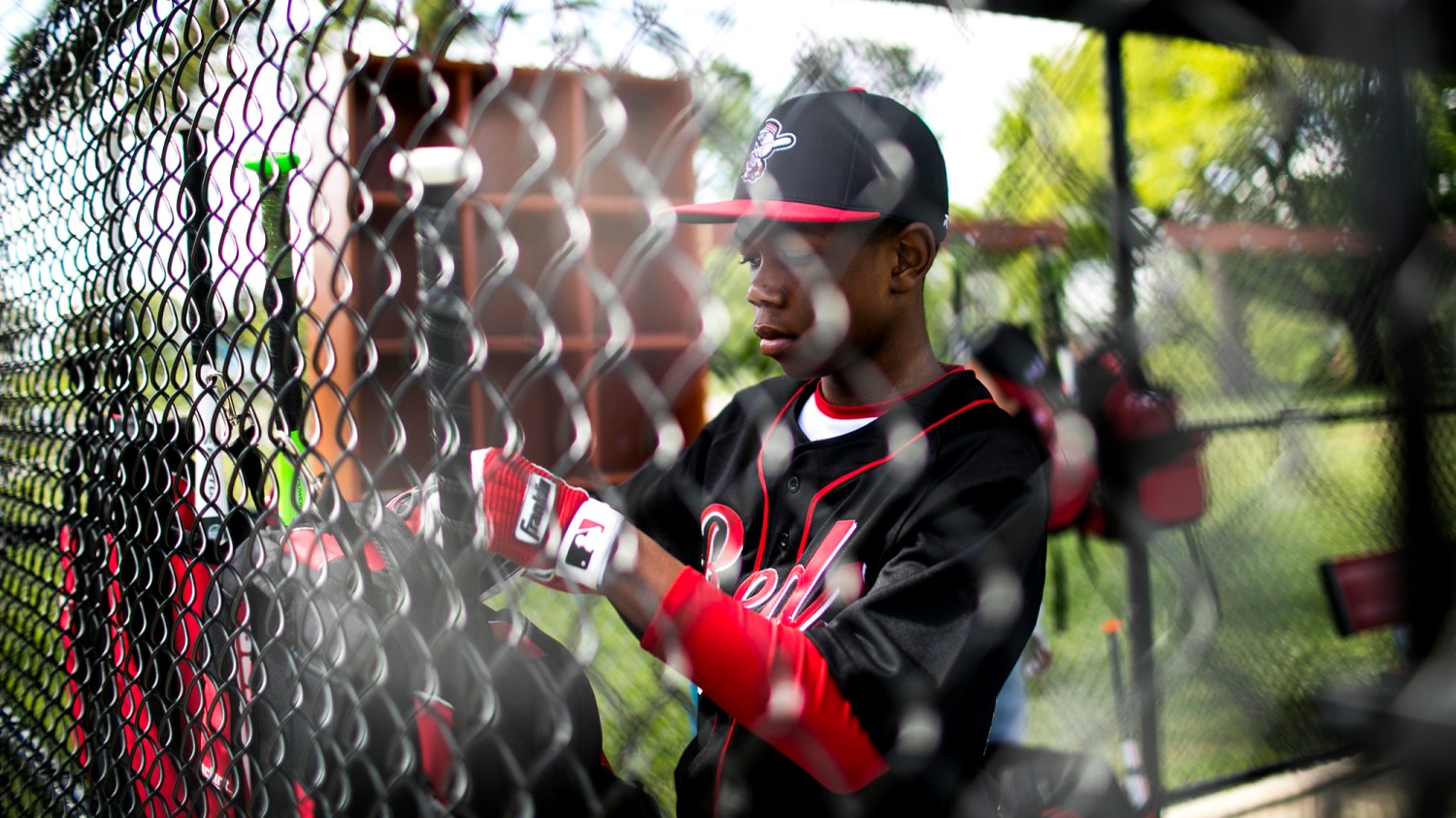 Members of the Cincinnati Reds RBI team practice at the P&G Cincinnati MLB Youth Academy on May 6, 2017. Maddie McGarvey for The Undefeated

Urban Youth Academies get black players back in the game

A look inside the Cincinnati baseball academy, the first built in a cold-weather city

Morgan, a member of the famed Big Red Machine in the 1970s that included fellow greats Johnny Bench, Pete Rose and Tony Perez, was overcome to see his work as a baseball ambassador result in something so meaningful.

“For a black kid, I came to the conclusion that you’re better off living in Cuba to get to the big leagues than you were living in the United States,” Morgan said. “Fortunately, [then-Major League Baseball commissioner Bud Selig] listened.”

Selig could see the steady decline of African-Americans in major league baseball, from 18 percent in 1991 to what would drop to 7.7 percent at the beginning of the 2017 season. There are various opinions on why the numbers have sunk so low, from African-Americans’ interest in other sports to the expense of participating. Major League Baseball tried to address the issue when it launched the Reviving Baseball in Inner Cities (RBI) program in 1989, but the numbers remained low. The number of foreign-born players, meanwhile, continued to rise. MLB rosters are composed of 29.8 percent foreign-born players, the largest percentage in baseball history.

Many foreign-born players are products of academies in Latin America supported by individual organizations in baseball. The academies provide players — mostly teenagers — with equipment, living quarters and everything needed to develop their game. All 30 major league teams have at least one academy in the Dominican Republic.

The emphasis on developing talent and interest outside of this country ignited Morgan to plead for some changes.

“I read about all of this about 15 years ago and it infuriated me,” Morgan said. “I told [Selig] that this doesn’t make sense that we have academies in the Caribbean and all over but not the same for our kids in the United States. I told the commissioner that I’m only asking that our kids get the same chance as the other kids.”

Because of Morgan’s push, the first MLB Urban Youth Academy was born in Compton, California, in 2006, followed by Houston and New Orleans. The academy in Cincinnati was the first built in a cold-weather city. There also are academies in Dallas; Kansas City, Missouri; Philadelphia; and Washington, D.C., with three more in development in the Bronx, New York; Chicago; and San Francisco.

MLB donated $2 million toward the $7 million total raised by the Reds and corporate sponsor Procter & Gamble. The Reds had run an academy out of an unused public high school building since 2009, but this state-of-the art complex gave the ballclub everything in one place to provide baseball for urban youths. The academy is a 33,000-square-foot indoor facility with a turf field, batting cages, pitching tunnels, a weight room and classrooms for students to receive tutoring.

There’s a Progress Wall in the main hallway honoring the young men and women who have graduated from the program and from high school, as well as those who have earned or are pursuing college degrees. Outdoors, the academy has four fields; one is a small stadium with a press box. And when you take Joe Morgan Way, the main road that leads into the academy, the landscape honors legends of the past. There’s a statue of Chuck Harmon, who became the Reds’ first African-American player in 1954, and plaques of many Negro League players and former Reds, including Hall of Famers Barry Larkin and Ken Griffey Jr.

The academy was designed to play host to the Reds’ RBI program. RBI offers area boys and girls ages 7 to 18 the opportunity to participate in baseball and softball clinics, travel baseball and character development programming, and even academic tutoring and vocational training, all free of charge. Players buy gloves and cleats at a 70 percent discount through an equipment partner with MLB, or players are provided donated equipment.

Clinics are often held by former Reds players such as Eric Davis and Dave Parker.

“It’s awesome when guys like Dave Parker come here and help us,” said Mark Davis, who will attend the University of Dayton on a baseball scholarship this fall. “I haven’t seen any other place that would give me this kind of opportunity, from the type of facility to the former major league volunteers to the affordability the RBI program grants us.”

About 1,200 boys and girls participated in the free programs during the 2016-17 school year.

“Our goal is to help kids get well-positioned for life,” said Reds Community Fund executive director Charley Frank. “We clearly want to develop softball and baseball players, but we want them to excel on and off the field.”

High school talent was once the lifeblood of major league baseball, and where most pro scouts searched for the next big leaguer. The rise in college baseball talent in the late 1970s and early ’80s generated even more talent.

The philosophy changed with the creation of more showcase tournaments, where the top amateur baseball players convene. The most popular is the Perfect Game, the largest scouting service, which puts on more than 100 tournaments per year. Since 2003, 9,295 players who have participated in Perfect Game have been drafted and 949 have played in the major leagues, according to Perfect Game. Not being able to afford the costs of travel to participate in these types of events has been another obstacle for many African-American players.

“We pay for those expenses,” said Jerome Wright, director of the Urban Youth Academy in Cincinnati. “We pay for the chartered bus, hotel, meals and entry into the tournament.”

MLB has seen some improvement recently when it comes to African-American participation in the sport. Over the past six years (2012-17), the first round of the draft has featured 41 African-American players out of 204 total selections (20 percent). In 2017, eight of the top 26 selections in the draft (30.8 percent) were African-American or Latino. June’s draft marked just the fourth time that the first two players picked were African-American: No. 1 overall pick Royce Lewis (Minnesota Twins) and No. 2 pick Hunter Greene (Cincinnati Reds). It also marked the third consecutive year that an alumnus of the RBI program was selected within the top five picks (2017, Greene, No. 2; 2016, Corey Ray, No. 5; 2015, Dillon Tate, No. 4).

R.J. Barnes became the first Reds Youth Academy alum (and RBI player) to get drafted when the Reds selected him in June in the 34th round.

“The academy gives a strong presence in the community and a place for kids to learn,” Barnes said. “You see rec centers with big open fields and basketball courts but not rec centers teaching kids how to play baseball. The free instruction helps you become the best baseball player you can be. Plus, the academy gives me a chance to play with so many black kids that are serious about baseball, and you can’t get that anywhere else.”

Wright said Barnes’ selection in the draft shed a light on the work being done at the academy.

“It’s beyond words because he’s such a great face on what we’re doing,” Wright said. “For example, he was just here this week volunteering with over 300 kids. That’s the kind of people we want to develop here, which makes R.J. a great face of our place indeed.”

The increase in African-American participation and the addition of more academies — at least one in every major league city in the next five to 10 years, says Reds chief operating officer Phil Castellini — will only help the MLB product. And that encourages Morgan, who is not only pleased that his former team was able to get an academy but also optimistic that the academy will provide even more kids with an opportunity to play.

“And if the kids in the urban communities get the same opportunities as the rich kids, you’ll discover the talent,” Morgan said. “The numbers didn’t drop overnight, and it’ll take a while to get it back. The numbers will never return to its peak, but we’ll give more black kids an opportunity to get to the big leagues, and that’s all one can ask for.”