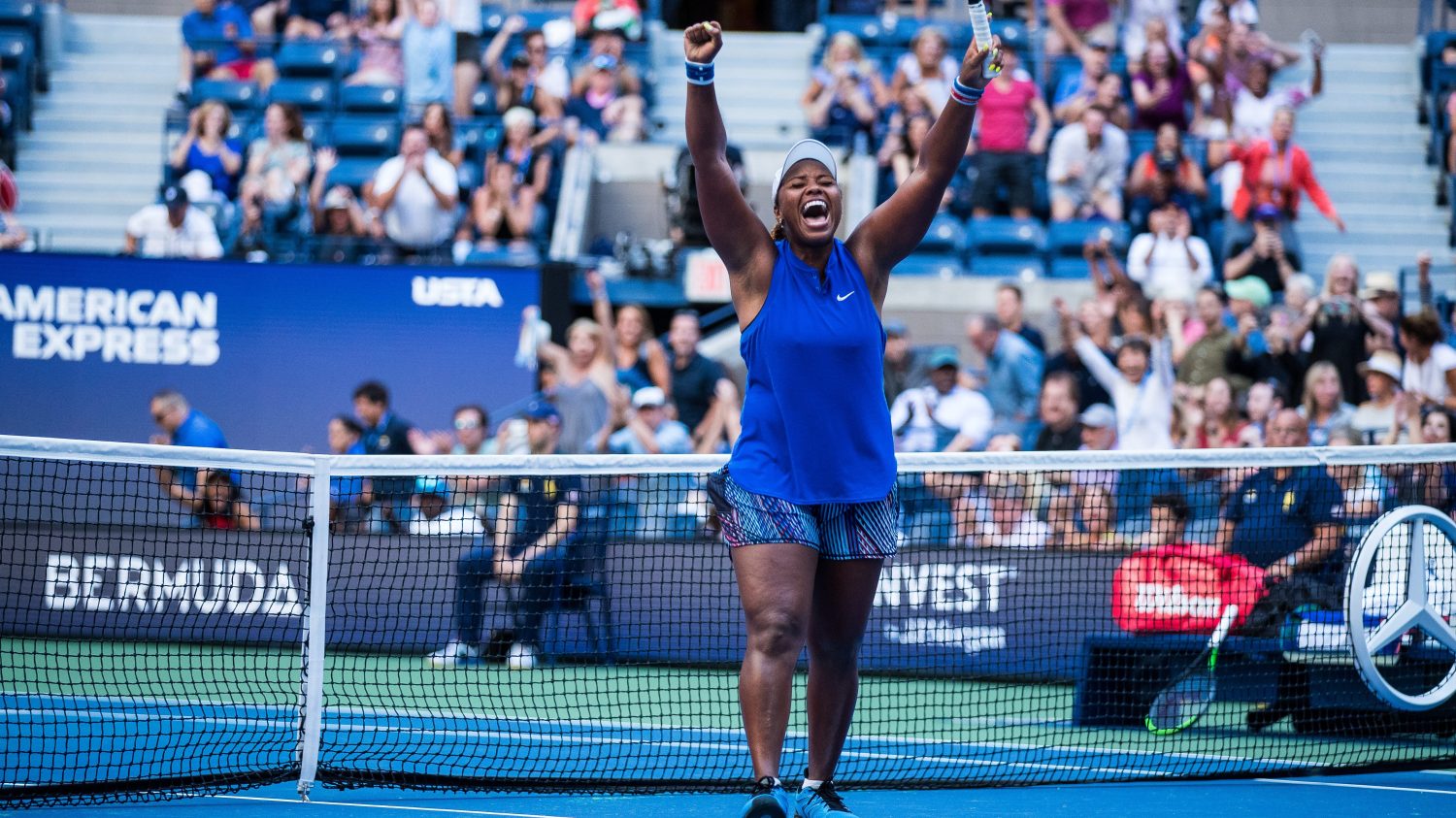 Taylor Townsend celebrates her victory over Simona Halep in the second round of the 2019 US Open at the USTA Billie Jean King National Tennis Center in New York City on Aug. 29. Chaz Niell/Getty Images
Tennis

Taylor Townsend has her come up at the US Open

‘I think for some years I was lost, lost in a sea of a lot of stuff. It’s nice to be able to come up to the surface and float, eventually swim.’

In a career full of trials and tribulations where Taylor Townsend struggled through being body-shamed and abandoned, perhaps the lowest point of her journey came while playing a 2016 International Tennis Federation tour event in Pelham, Alabama. As Townsend stepped up to serve during her first qualifying match of that $25,000 tournament, she glanced across the net at a 69-year-old woman who was three decades past her prime.

“I couldn’t believe what was happening; it was insane,” recalled Townsend on Thursday, talking about an opponent, Gail Falkenberg, who had achieved her highest ranking (No. 360) back in 1987. “I was like, ‘What the F is going on.’ But I was playing lower-level tournaments that allowed something that should never happen in professional sports. It was a slap in the face. I knew I was better than that.”

That moment lit a fire under Townsend that never burned brighter than her current run through the US Open, which continued with Saturday’s third round win over Sorana Cîrstea, 7-5, 6-2, to send her to the second week of a major for the first time in her career. The southpaw, who had to win three qualifying matches to get into the main draw, has emerged as the biggest surprise of this year’s tournament with a serve-and-volley style that saw her come to the net 75 times against Cîrstea (winning 47 points).

“I’m here now,” Townsend said Saturday, when asked about playing into the second week. “Might as well ride this all the way.”

She's into R2 of the @usopen after being a set down to Kateryna Kozlova.#TeamUSATennis pic.twitter.com/3oZiei3AtO

It wasn’t simply that Townsend beat Halep, the 2019 Wimbledon champion, but it was how she did it: overwhelming the two-time Grand Slam champion with an old-school serve-and-volley game that’s rarely seen in today’s game. She came to the net 106 times, winning 60% of her net points.

Being bum-rushed left Halep perplexed, for good reason, as she had won all three of her previous matches against Townsend without dropping a set. That confusion carried over during her postmatch interview Thursday, where she described Townsend’s style as being “a little bit weird” while at the same time questioning her own tactics to combat the constant net-rushing that made the 5-foot-7 Townsend appear larger than life.

Asked whether she had ever played a match against a player who rushed the net so consistently, a dazed Halep replied, “Never. Never.”

It was only fitting that the final point of the match came with Halep drilling a return into the middle of the net, just feet in front of where Townsend was firmly planted. As Townsend screamed with both arms raised high and began to tear up, she was showered with love by most of the crowd at Arthur Ashe Stadium — a place that assumed she’d be a fixture after a successful junior career in which she won both the singles and doubles junior championships at the 2012 Australian Open.

What happened after that 2012 success? That’s probably related to the message Townsend posted on her Instagram page shortly after Thursday’s win, a lyric from a Drake song:

“I’m buying the building of every door that closed on me.”

Despite achieving the status in 2012 as the top-ranked junior player in the world, Townsend had the door shut on her by, of all organizations, the USTA, which refused to pay her way to the 2012 US Open and other tournaments until she lost weight.

“Our concern is her long-term health … and her long-term development as a player,” was the response from Patrick McEnroe, who at the time oversaw the USTA player development program. [McEnroe, coincidentally, showered Townsend with praise while calling Saturday’s match for ESPN].

Financial backing for Townsend to get to that US Open came from supporters, who raised money through a fundraiser held by the South Chicago tennis program where she learned how to play.

Verbal encouragement came from diverse voices within the tennis community, ranging from Serena Williams (“For a female, particularly, in the United States, in particular, an African American, to have to deal with that is unnecessary.”) to former world No. 1 player Lindsay Davenport:

I'm really disheartened by this Taylor Townsend news :( makes me sad. Also makes me wonder if any females were involved in decision making.

The USTA eventually apologized and reimbursed the travel costs incurred by Townsend’s family.

But the damage was done: A 16-year-old who dominated her sport was abandoned by the tennis establishment because she didn’t fit a certain look.

For Townsend, that left scars that will last a lifetime.

“When personal issues are publicized … that’s always attached to you,” Townsend said. “It’s been a long road, a lot of haters.”

Townsend set out to prove that she could become a success.

In 2013, she made her WTA tour debut, winning her first tour-level professional match at Indian Wells. In her next tournament, the 2013 Citi Open, she reached the finals in doubles.

In 2014, she played her first Grand Slam match as a wild card at the French Open, winning two matches (including a second-round win over the top-ranked French women’s player, No. 21 Alizé Cornet). Townsend, who entered the tournament ranked No. 205, eventually lost in the third round to the No. 15 player in the world, Carla Suárez Navarro.

But then her career went into a deep dive. Townsend won just four matches the rest of the year, leading to a rankings free fall that reduced her to playing ITF-level events. After losing the first match of an ITF event in October — she won $228 — Townsend decided to take a few months off.

“I lost my passion for the game,” Townsend said. “The realization of being in the main draw of Slams to playing qualies in 25s was really, really hard for me. I was just trying to persevere.”

Townsend, playing mostly ITF events, fell to No. 394 in March 2016. But as she put an ungodly number of miles on her car while driving to the small towns that make up the tennis version of the “Chitlin Circuit’,” Townsend’s low point came in that April match against Falkenberg (who three years earlier, at the age of 66, had lost a match in straight sets to a then-15-year-old named Naomi Osaka).

“There was a moment where I accepted where I was, and I just said out loud to myself, ‘I don’t like this,’ ” Townsend said. “I wanted to be back on the WTA, I wanted to be in Slams, but my ranking was at a certain place. I was like, ‘All right, what tournaments should I enter to make this right?’ ”

Townsend reached the semifinals of that Alabama tournament. She won her next tournament, which was also in Alabama, as a qualifier.

She wound up playing in the 2016 French Open (she lost in the second round), Wimbledon (lost in qualfiers) and the US Open (lost to Caroline Wozniacki in the first round after winning three qualifying matches) and ended the year ranked No. 132. Since then, Townsend has continued to grind, reaching a career-high ranking (No. 74) last year.

Even with that dramatic career shift, Townsend, despite the great promise she demonstrated as a junior, is ranked outside of the top 100 (No. 116), which has kept her from being a regular at WTA events (she has played the majors). Conversations over recent years that focused on the next generation of great American women’s players — Sloane Stephens, Madison Keys and now Coco Gauff — have mostly excluded her name.

“Honestly, that conversation doesn’t really matter to me,” Townsend said. “It’s an ever-evolving door. Anytime that someone has one or two good results, they’re the ‘next.’ … But it doesn’t matter, because I’m here now.”

And Townsend’s here, set to play in a third-round match on Saturday, playing a serve-and-volley style that’s uncommon in today’s game. How to spot the difference: In photos of old grass court tournaments, much of the wear and tear on the court includes the service areas; the worn-out spots in today’s game are almost exclusively along the baselines.

“It’s a lost art because nowadays the game of the great players is bang, bang, from the baseline with everybody seeing who can hit the ball the hardest,” said Lenny Simpson, a professional tennis player in the 1970s who now is an instructor in North Carolina. “Townsend’s a great athlete, and you take someone like that who can come to the net and shove it down an opponent’s throat, they won’t know what to do with that.”

Townsend’s game was, indeed, savage, which is the word that was part of her postmatch outfit, printed on the left side of the orange shirt she wore as she walked the grounds making her media rounds on Thursday.

Next up for Townsend: Sorana Cirstea, the No. 106-ranked player whose career-best Slam result was reaching the quarterfinals of the 2009 French Open.

In 2012, Townsend became the top junior player in the world and was expected to make headway on the international tennis scene.

In 2019, Townsend, by beating the No. 4 player in the world, appears to have finally arrived.

“I think for some years I was lost, lost in a sea of a lot of stuff,” Townsend said. “It’s nice to be able to come up to the surface and float, eventually swim.

“I feel this was a huge, monumental moment,” Townsend added. “It was a defining moment for me to realize that I belong here.”