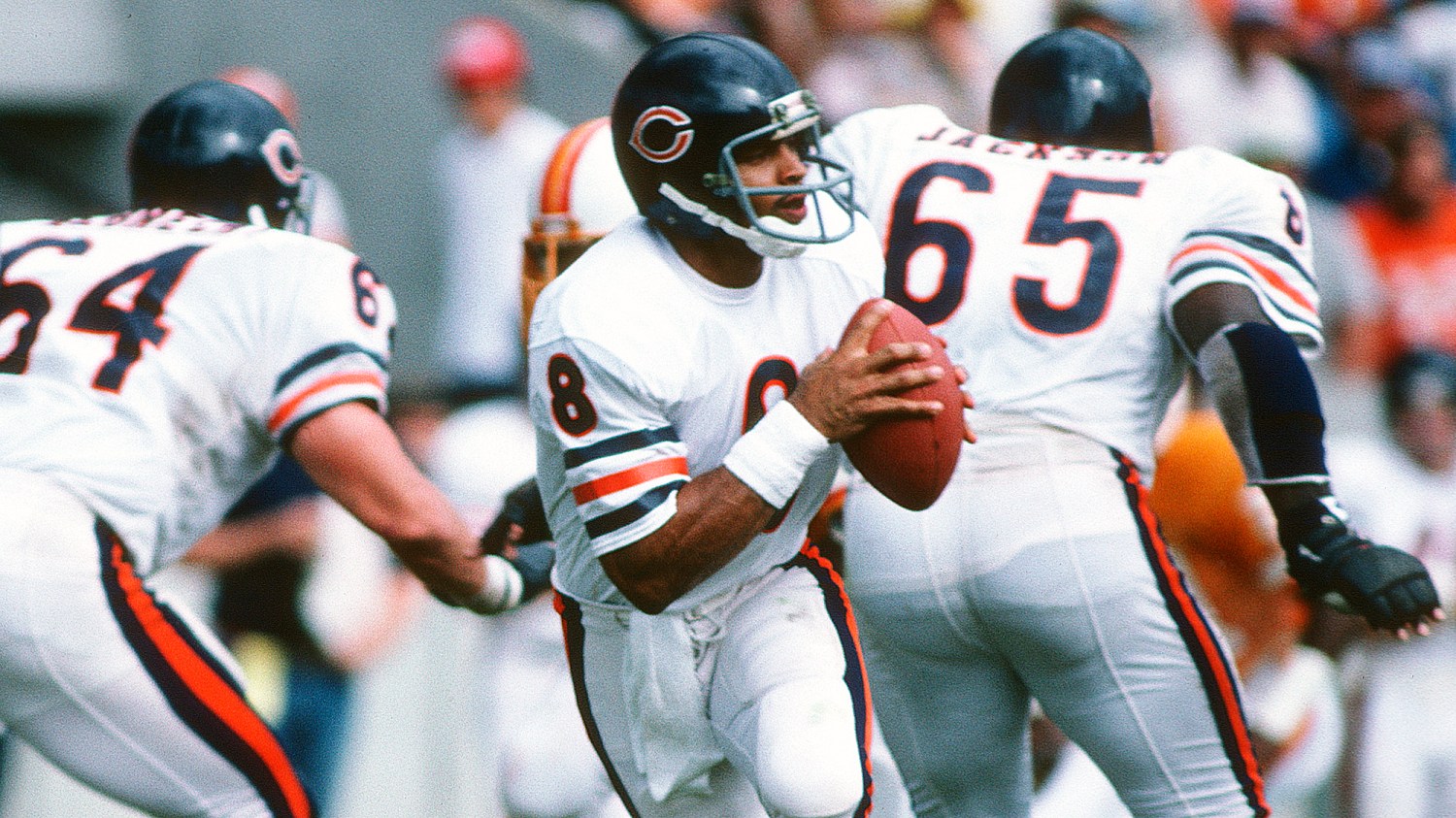 Vince Evans #8 of the Chicago Bears drops back to pass against the Tampa Bay Buccaneers during an NFL football game December 20, 1980 at Tampa Stadium in Tampa Bay, Florida. Evans played for the Bears from 1977-83. Focus on Sport/Getty Images
Black Quarterbacks

Vince Evans was steadfast on playing quarterback in the pros

Evans was excited by that 1967 matchup (No. 1 UCLA vs. No. 4 USC), thrilled by the high stakes between the teams (a trip to the Rose Bowl) and impressed by O.J. Simpson’s 64-yard touchdown run early in the fourth quarter that gave the Trojans the lead for good in a 21-20 win.

But what helped put the whole series of events that day over the top?

“This beautiful Arabian white horse with this Trojan mascot on it, running around the Coliseum floor,” Evans recalled. “I looked at my father and said, ‘That’s the school I’m going to.’ ”

His father glanced at his 12-year-old son, who had never been out of the state of North Carolina or even on an airplane.

“Boy,” he said, incredulously, “you done lost your mind.”

The next year as a sophomore he was a backup quarterback at USC, which was impressed by Evans’ arm after seeing him play in a junior college showcase.

As a junior, Evans settled in as the starter for the Trojans, setting up a senior season in which he led the Trojans to a Pac-10 title and an MVP performance in a Rose Bowl win over Michigan.

When the Chicago Bears drafted Evans in the sixth round of the 1977 draft and sent signals of converting him to a different position, he resisted, insisting on a contract clause that stated he would only play quarterback.

During his career, he often played the position well. In 1980, the first of his two seasons when he was a full-time starter with Chicago, he posted the only perfect quarterback rating in Bears history when he completed 18 of 22 passes for 316 yards and three touchdowns in a 61-7 win over the Green Bay Packers.

“On that day, I felt like an artist,” Evans recalled. “It was like poetry in motion. Every play that was called, every block that was needed, every pass route that was run, every pass thrown, it was all in perfect symmetry. It’s rare that happens to you.”

Evans played professionally for 16 seasons in a career that spanned three decades and eventually ended when he was 40. He was a part-time starter in the NFL early and a longtime reserve late. Those largely clipboard-holding years at the end might have been affected by his 1984 decision to join the USFL after seven seasons with the Bears.

“One of the major regrets of my football career,” Evans said of leaving the Bears for the Chicago Blitz. “The Bears had drafted Jim McMahon, and the USFL was offering a lot of money and a starting position. McMahon got hurt, and I probably would have played. My ego got in the way.”

After one year with the Blitz, Evans went to the Denver Gold, and then the league folded. He assumed his previous stint in the NFL would immediately give him a second chance.

He missed the entire 1986 season after the USFL folded. Evans returned only after the NFL strike two games into the 1987 season, when desperate owners worked feverishly to fill rosters.

Evans reached out to every NFL team, with the Oakland Raiders offering the lone opportunity.

When players began to cross picket lines, eventually leading to the end of the strike, Evans was one of two replacement players to remain with the team.

He was never an opening day starter from that point, and his favorite memories of the remainder of his career are the game-winning drives he led when he was summoned off the bench to replace an ineffective or injured quarterback.

“Do I regret not being a starter for most of my career? That’s the hand I was dealt, and I have no regrets,” Evans said. “I dealt with the circumstances that were in front of me, and hopefully I did it with class, grace and a style that the fans appreciated.”

While he’s happy he stayed firm in playing quarterback when he came into the league, Evans understands that his complexion had him judged differently.

“During the time I came up, every time you got in the game you had to be damn near flawless,” Evans said. “That was not the case with my white counterparts. We’d be in film sessions and see the mistakes they were making, and there wouldn’t be a glaring criticism. That wasn’t the case with me.”

Evans’ long career allowed him to witness Doug Williams become the first black quarterback to win a Super Bowl in 1988, and to bond with some of the African-Americans considered to be pioneers at the position.

“We had a black quarterbacks club we called the ‘field generals,’ and that allowed me to have a bond with guys like Doug Williams, Marlin Briscoe, James Harris, Warren Moon and Randall Cunningham,” Evans said. “We kicked that club off when Joe Gilliam died; we wanted to not only commemorate his life but continue the legacy of what he had done with his tenure in the league.”

Which makes him proud to see that legacy continue with the likes of Dak Prescott, Cam Newton, Russell Wilson and Deshaun Watson.

Since leaving the game after making three starts in the 1995 season, Evans has had a successful career in real estate in Southern California.

“I often wonder what would have happened had I gotten into real estate earlier, because I’ve made more money in this business,” Evans said. “All those times Bubba Baker planted his helmet on my chest, I could have been selling real estate!”

Even with all the hard knocks Evans took over the course of his career, he’s ecstatic that he’s considered one of the pioneers who helped open the doors for the current black quarterbacks.

“I think for any of us, we like to think that whatever body of work we were given, we did a good job,” Evans said. “I got to play with some of the greatest players in the world. I’m glad I could help pave the way for others.”