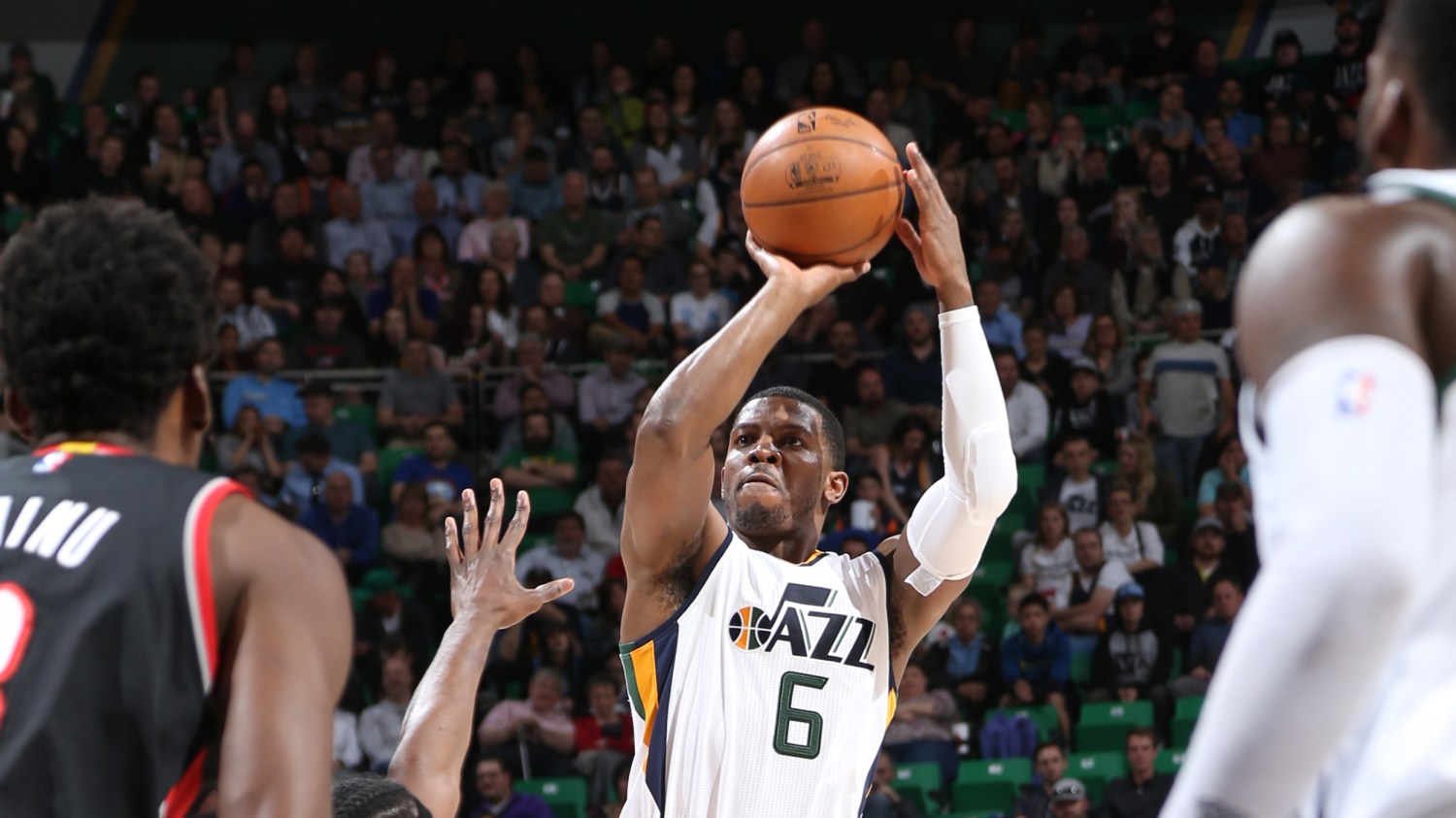 ‘To be one of the dinosaurs still around, I’m happy for that.’

The No. 1 pick in the 2001 NBA draft was Kwame Brown, a renowned bust now signed up for Ice Cube’s upcoming 3-on-3 league. Phoenix Suns coach Earl Watson was selected that year, as was Golden State Warriors assistant coach Jarron Collins.

While Collins worked out Warriors players before Game 1 of a second-round playoff series versus the Jazz on Tuesday night, Johnson sat courtside after putting up shots and expressed appreciation for his longevity.

“It’s been 16 seasons. I’m still able to play at a high level. It says a lot because a lot of the guys in my draft class have come and gone. To be one of the dinosaurs still around, I’m happy for that,” Johnson told The Undefeated before the Warriors beat the Jazz, 106-94.

Johnson is 42nd in NBA history in career points with 20,033 and ninth all-time in 3-pointers made with 1,938. The seven-time NBA All-Star has done well financially, too, as he has earned $199 million. “Iso Joe” will be playing in his 110th NBA playoff game when the Jazz attempt to even their series against the host Warriors on Thursday night.

The 35-year-old swingman can still play, as evidenced by the buzzer-beating game-winning shot he nailed against the Los Angeles Clippers in Game 1 of their first-round playoff series. Johnson spoke to The Undefeated about mentoring the young Jazz players, the challenge of beating the Warriors, Paul Pierce, whether he should make the Hall of Fame one day, the best advice he’s ever received, and more.

You regularly say you “enjoy the moment” of playing in the NBA now. What do you mean by that?

You never know when this opportunity is going to be gone. You can’t take it for granted. That’s what I mean when I say enjoy this moment. Obviously, we’re playing against a great basketball team. You’ve got to believe and be confident.

What came to mind when you saw ex-teammate Paul Pierce play his final NBA game last Sunday when your Jazz eliminated the Clippers in the playoffs?

I was happy for him, man. He had a great career. Twenty-six thousand points. A title. He played on some great teams. I had a chance to play with him on two separate occasions [Boston and Brooklyn]. It was fun.

How did you feel seeing another NBA player from your era retire?

I’ve never even thought about it that way. For me, I don’t even think about retirement because I’m enjoying the game so much and my body feels great. I don’t look at it like that. I’m happy for him, and I know he is about to start another career. I’ve had thoughts about what I will do [upon retirement]. But I’m not really sure yet.

Do your young teammates keep you young and also tease you about being the old guy?

They tease me about being old, but at the same time they gave me energy and give me life day to day, especially when you come to work. For these guys, this is their first time in the playoffs. That was their first time playing in a Game 7 [versus the Clippers]. That was my ninth time playing in Game 7. It’s fun to see these guys grow in the moment. That’s one of the things I’m most proud of, is how we’ve grown.

How much mentoring have you had to do with the Jazz?

Honestly, not a whole lot. But I do give advice when I feel it is needed or if I’m asked.

Before you made the game-winning playoff basket against the Clippers, the assumption was that Jazz All-Star forward Gordon Hayward would take the last shot. What made you confident and comfortable to take the shot instead?

The play was for me to take the ball out, actually. But [Jazz forward Derrick] Favors actually took the ball out and then gave it to me. I was looking for Gordon, but C.P. [Clippers guard Chris Paul] was chasing him. I was like, ‘Oh, let me just take the ball up the court.’ And as I take it up the court, I looked at the clock and saw there was like seven seconds. I was like, ‘All right, I’ve got to look into my bag now.’

[Jazz guard] Joe Ingles had [Clippers guard] Jamal Crawford on him and set a pick to force a switch [defensively]. I was going to go with five [seconds] on the clock, but I didn’t want to leave that much time. So I kind of hesitated and went to business.

You have made a lot of big shots during your career, but where did that one rank?

That’s right at the top because I always feel that the best game in a series to get is the first one, especially if you’re on the road. We put our imprint on that game.

What kind of advice have you given to Hayward?

The one thing with Gordon, because we pretty much play the same position, just be consistent and dialed in, day in and day out. Especially in the playoffs. They are going to give you different looks. You’ve got to be able to adjust. He’s been great.

What do you think about the challenge of beating the Warriors?

This is the biggest challenge trying to beat these guys in a seven-game series. You know it’s going to be tough. They’ve got guys who can really put numbers on the board. We have our work cut out for us.

It was a surprise when you signed as a free agent with the Jazz last summer. Looking back, are you happy about your decision?

I’m always sure of myself. Who knows how things may turn out? So far, it’s been pretty good. I’ve enjoyed watching these young guys and seeing them improve and still being able to play at this stage and age of my career.

Do you dream of making it to the Naismith Memorial Basketball Hall of Fame?

I would like to, but it wasn’t one of my main goals when I got here. When I came into this league in 2001, I just wanted to give everything I have to become one of the greatest.

If you were to go to the NBA Rookie Symposium this summer, what would you tell the newcomers?

My advice would be to create great habits. That was one thing that was taught to me coming into the league. Whether it’s how you eat, lifting weights or taking care of your body, get to the gym, get the massage, be a creature of habit. Make things routine. That is how I learned coming in.

When I went to Atlanta, I felt like everything was on my shoulders. I remember one day talking to [then-Phoenix Suns guard] Jim Jackson in Atlanta. We started off 7-27. I was talking to Jim Jackson, and he was telling me, ‘Man, you have to create great habits. Don’t develop bad habits.’ I saw myself developing bad habits. As the years went along, it started to get better for us. But you have to be a creature of good habits.