Vikings’ Stefon Diggs returns to hometown of Washington to donate coats to students in need: ‘I’m not that far off from you’

WASHINGTON — In a spacious black and gray room inside the Early Childhood Academy Public Charter School in Southeast Washington, lunchroom tables have been repurposed into makeshift display tables like one would find at a department store. On each table sit mountains of winter coats in a multitude of colors: pink, burgundy, gray, blue, orange, red.

Dozens of schoolchildren — from prekindergarten to third grade — line up outside the multipurpose room, awaiting the help of volunteers to usher them in. One of the volunteers is Minnesota Vikings receiver Stefon Diggs, who reaches out his hand to a small boy. Smiling, the boy grabs Diggs’ hand and walks over to one of the tables. He selects a bright orange coat that swallows his tiny body like he was Baby Yoda. Over the course of an hour, approximately 300 kids go through the same process with Diggs and the volunteers.

Diggs, who recently surpassed 1,000 yards receiving, is back in his hometown on this early December morning for the first of what he hopes will become an annual winter coat drive for needy schoolchildren. Diggs has held his own events in Minnesota and initially planned to hold the winter coat drive there, but he later told Operation Warm — a Pennsylvania-based nonprofit organization that donates hundreds of thousands of new winter coats every year to children in need — he would rather make an impact with children who had backgrounds similar to his in the Washington metropolitan area. 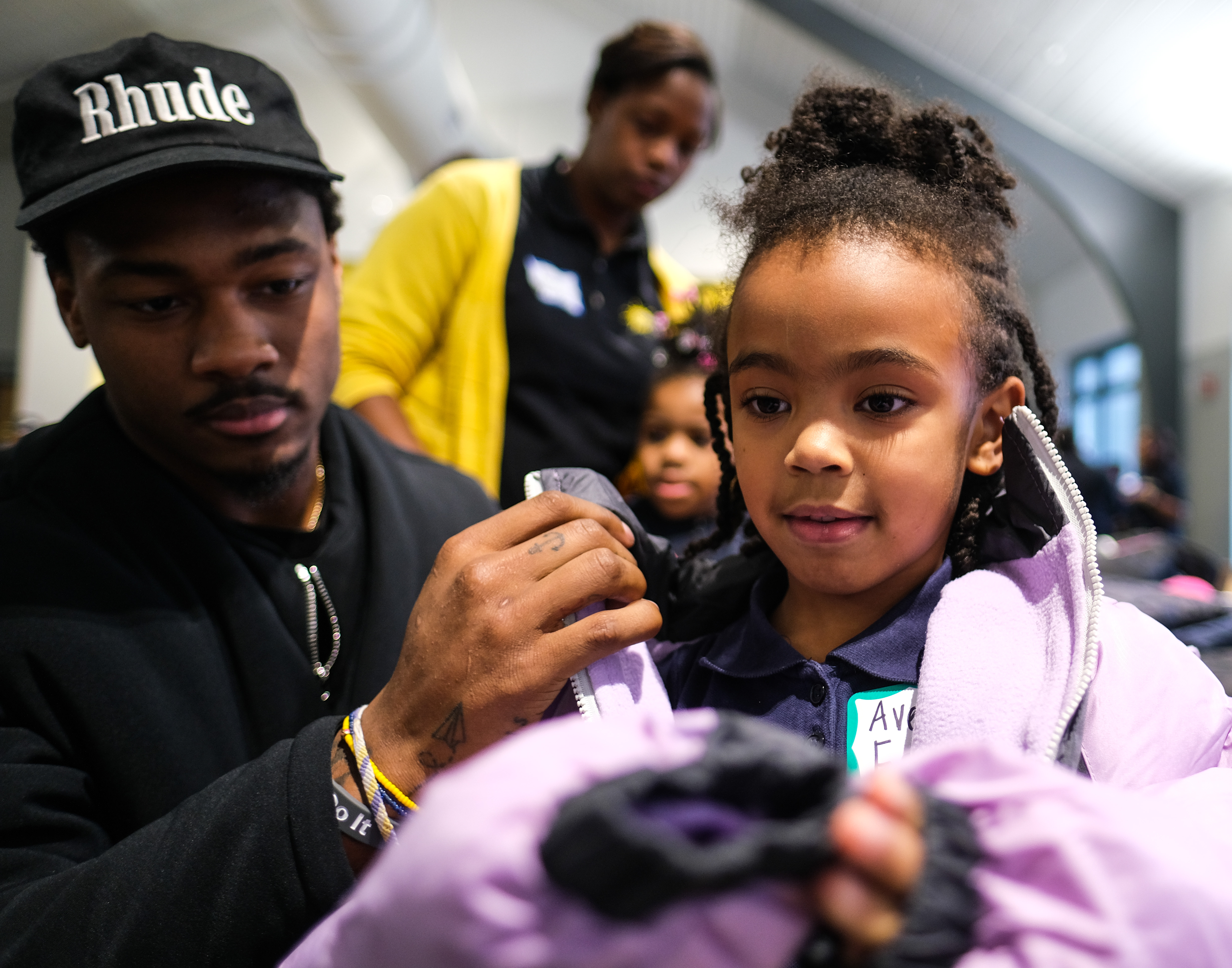 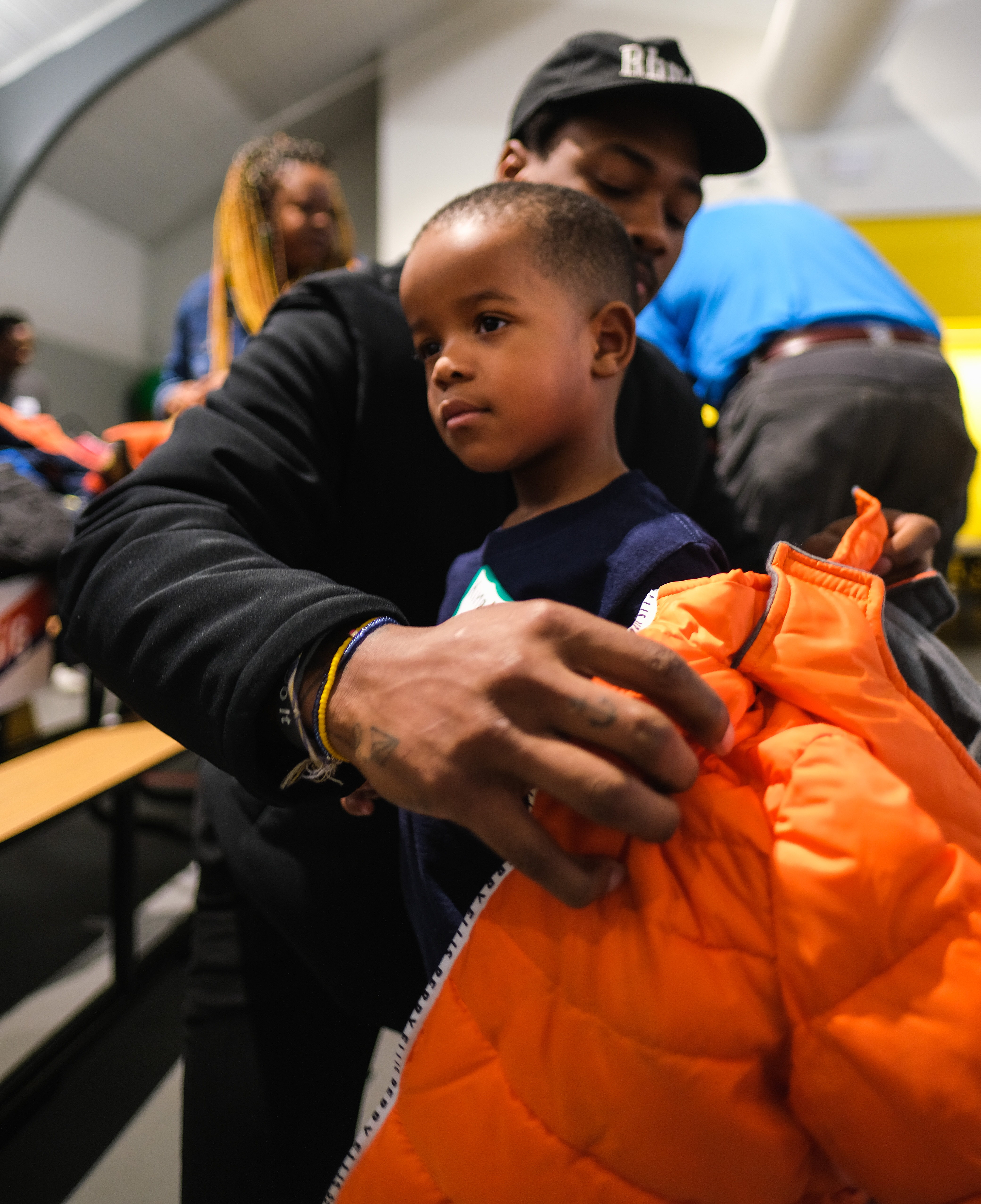 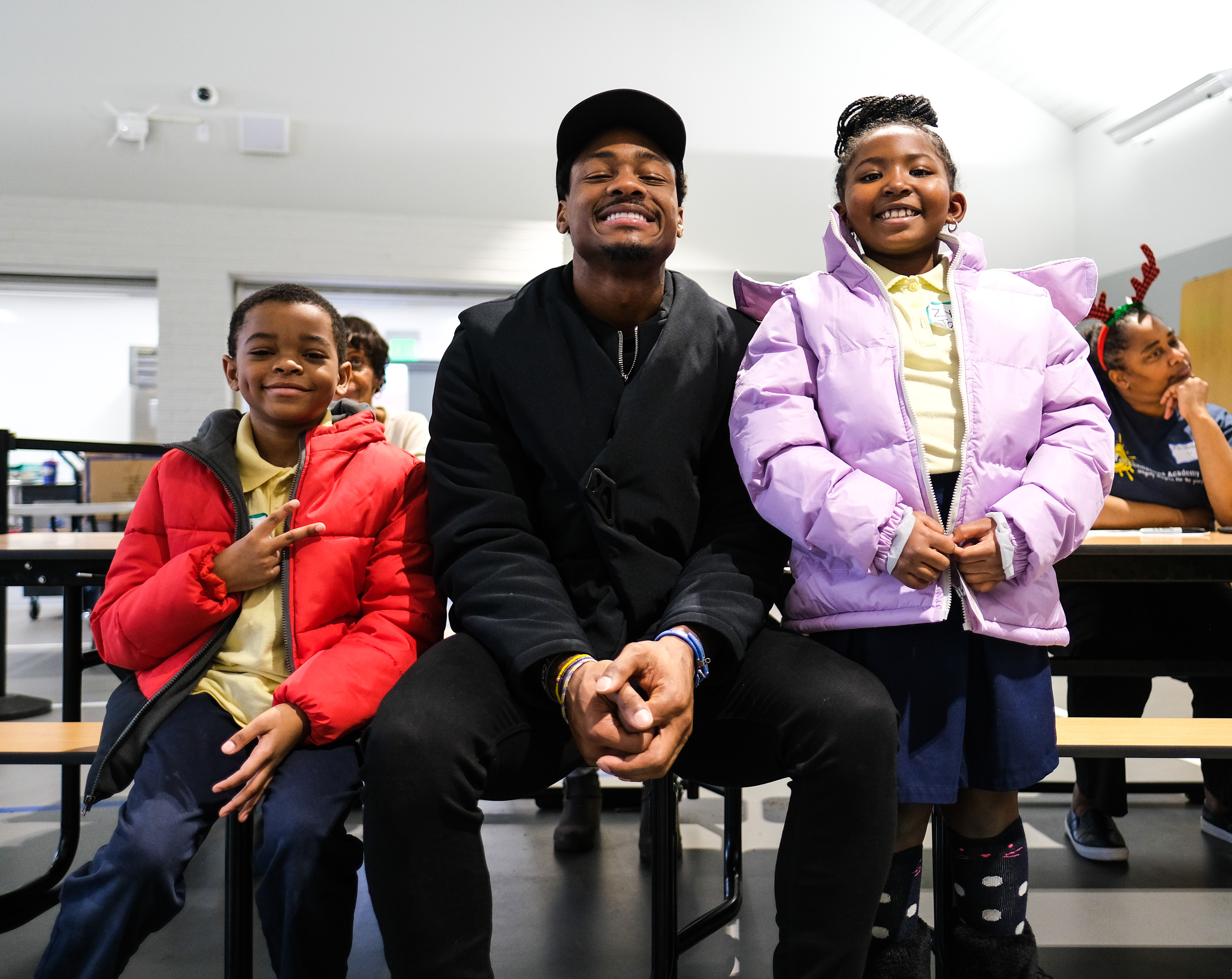 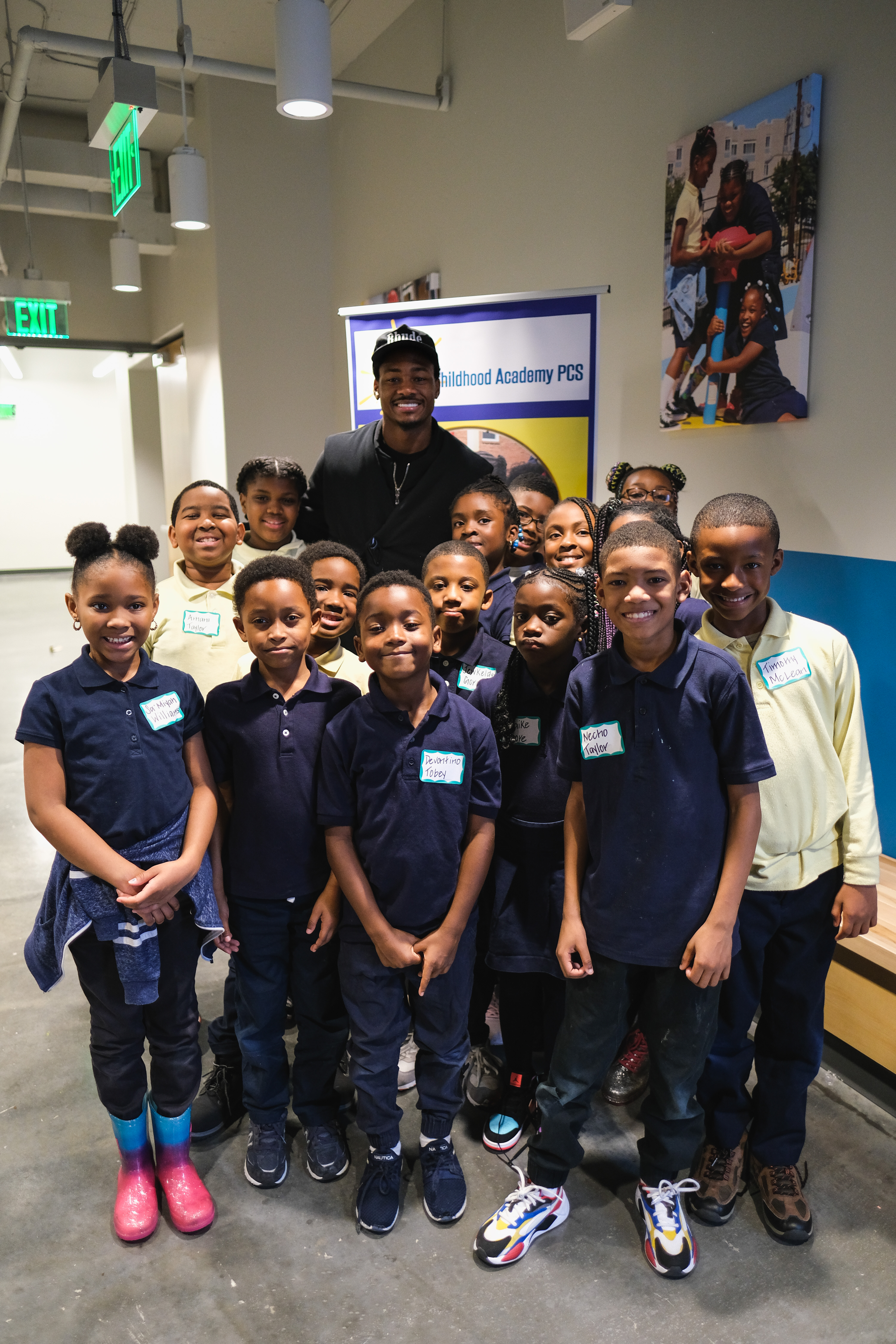 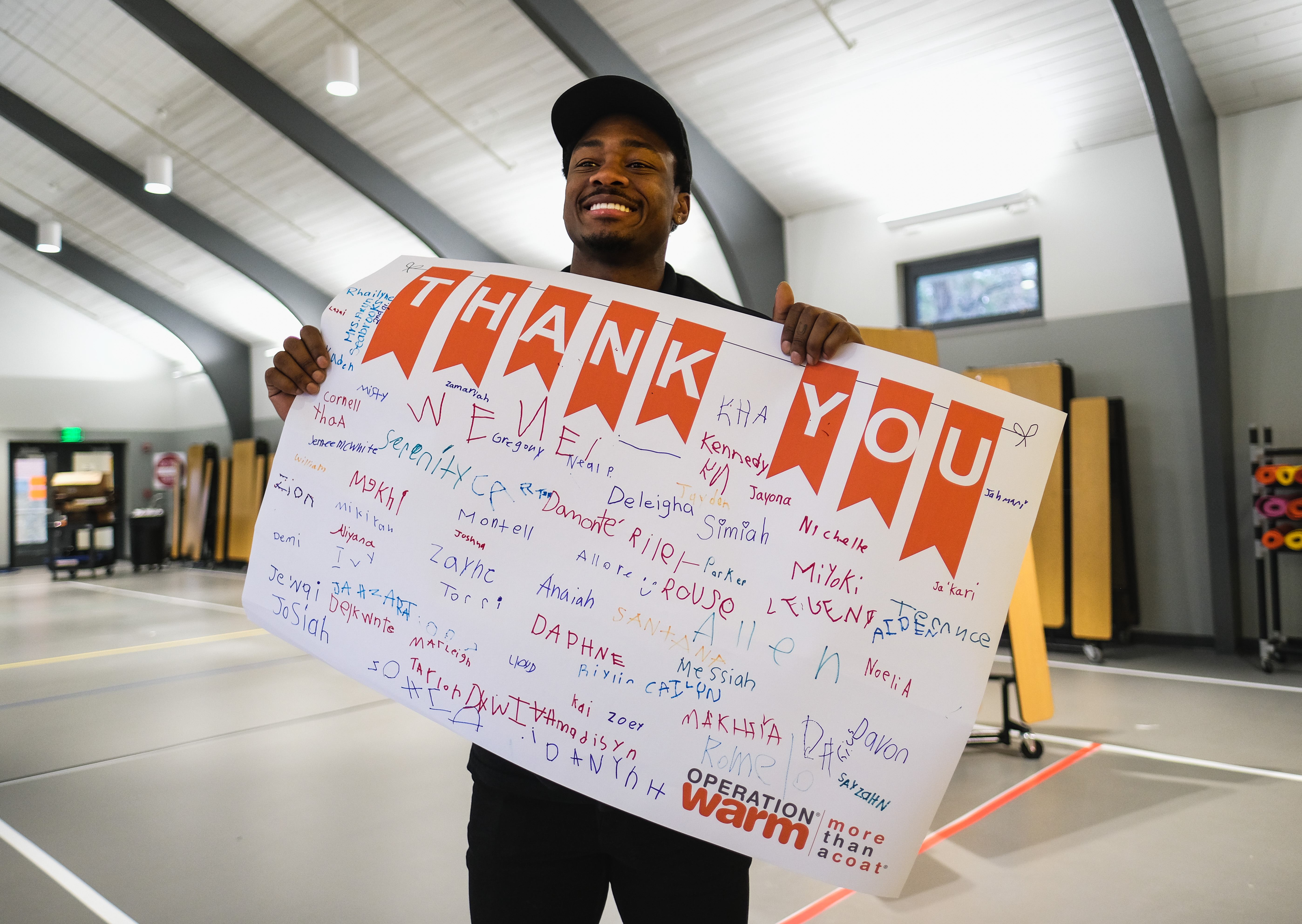 The 2015 fifth-round pick understands the importance of a personal winter coat firsthand: While growing up he had to share coats with his siblings. His mother, Stephanie Diggs, had to do everything she could to afford the essentials for her kids, especially after her husband, Aron, died of congestive heart failure in 2008, when Diggs was just 14 years old. Watching his mother shift into survival mode back then instilled philanthropy into Diggs.

“For me, I hold that dear to my heart and try to give some coats to some kids that, whether their mom had it or didn’t have it, it’s something less to think about if she already has a lot on her plate,” Diggs said. “It was kind of rooted in me to give back when I can give back, just as she did everything she could. So, to help other people is huge.”

Diggs, who spent part of his adolescence in Virginia and Maryland, specifically targeted Southeast Washington because he knew coats would have a greater impact here. The area has a stigma of being poor, black (nearly half of the district’s black population lives here) and drug-ravaged, but to Diggs, it’s where he was raised, where his people are, he said.

Parts of Southeast Washington, located east of the Anacostia River, have poverty rates three times as high as the rest of the district, according to a 2016 report by the DC Fiscal Policy Institute, a progressive think tank. At the same time, the area has a bustling African American culture, highlighted by the Frederick Douglass National Historic Site, the Anacostia Community Museum and Busboys and Poets, a restaurant-bookstore-performance center tailored to the black identity.

Chefik Simo, who consults and advises for Operation Warm and whose father-in-law, Richard Sanford, founded the organization in 1998, targets black athletes like Diggs (“players from the culture, of the culture,” Simo said) who have a desire to effect change in underserved black communities. Operation Warm has also collaborated with athletes, including the Philadelphia 76ers’ Ben Simmons and players from the Utah Jazz.

The presence of prominent black people does two things for young kids: 1) gives them something to aspire to and 2) allows them to see someone who looks like them giving back. A single winter coat, Simo said, does way more than keep a child warm; it can improve the kids’ self-esteem, confidence and interpersonal skills.

“The effect and impact goes much farther than just this initial drive and giving them a coat,” Simo said.

Most of the kids are shy around Diggs at first. When one girl is initially paired with Diggs, she is both reluctant to grab his hand or acknowledge his presence. She just stares. But by the time she picks out her gray and pink coat and has her name written on the tag by a volunteer at a table in the back of the room, she drops her shield and gives Diggs a celebratory high five. Diggs wants to make it known to them that, in his words, “I’m not that far off from you. I’m not that much different.”

The kids old enough to recognize Diggs as an NFL player spend most of their time asking him questions. During a question-and-answer session reserved for the third-graders later in the day, Diggs fields a wide range of inquiries:

How did you get into football?

Do you take cold showers?

One student asks Diggs to name his favorite team growing up. When Diggs responds that he used to root for the Dallas Cowboys — a faux pas in Washington Redskins territory — the crowd boos its guest of honor. One little girl lets out an audible “ugh.”

It’s a light moment and a welcome distraction for Diggs from the grind of an NFL season. After a rocky start to the season — there were reports of Diggs requesting a trade due to frustration with the offense’s run-heavy strategy — the Vikings have won eight of their last 10 games and are on the verge of clinching a playoff spot. On Monday night, they have a key matchup with the Green Bay Packers (ESPN, 8:15 p.m. ET).

“I feel like we righted all the wrong,” said Diggs, whose role has dramatically increased from the first quarter of the season. “We find out multiple ways to win, not only just running the ball, but being a passing team when we need to be, and the offense has been playing pretty good [since].”

Diggs stepped up as the team’s clear No. 1 option after fellow receiver Adam Thielen, who has led the team in receiving yards the previous three seasons, missed five games from weeks 8 through 14 and played just seven snaps in Week 9 against the Kansas City Chiefs.

“As far as, like, having a prominent role … I take it head on because a lot of my guys look up to me,” said Diggs, who ranks eighth in the league this season in receiving yards (1,073) and fourth in yards per reception (17.9). “I try to do my best to lead by example.

“So regardless if there’s anybody out there with me or not, I got to play at a high level and I take it real serious and I feel like over the course of these weeks they tried to lean on me and I did everything I could have to put us in a position to win.”

Diggs has cemented himself as the franchise’s most dangerous downfield threat since the days of Randy Moss. His eight receptions of 40 yards or more this season are the most by a Vikings player since Moss’ eight in 2000. “That’s crazy,” Diggs said when told of that stat. “You’ve got to think about it as an honor because he played some hell of football back in his time and he was one of the best to ever do it.”

That said, on this day in Washington, Diggs would rather focus on his current company. One kid stops in his tracks, mouth agape, when he notices the star of the “Minneapolis Miracle” is standing right in front of him.

It’s important, Diggs said, for little kids — specifically black ones — to see someone in his position be visible, especially at Early Childhood Academy, where 100 percent of the students qualify for the federal government’s free and reduced-price meal program.

Lee Fulton, vice president of strategy and operations for Operation Warm, which has held donation events in 40 states in 2019 alone, said the star power is just a beginning point for the students.

“When that person talks to them like he knows them — which Stefon does, he understands what it’s like to grow up around here, and he can speak to them in a way that nobody else can — they really respond,” Fulton said.

At the school, on one of the tables, large “thank you” cards are available for the kids to sign. One little boy writes what looks like an uppercase E and a large rock. His work is finished.

It’s the effort that counts.