These six players will play in the MEAC/SWAC Challenge

The six nominees for the ninth annual Walter Payton Achievement Award, which is given to one player from each team participating in the MEAC/SWAC Challenge, have been announced. The 13th annual game, which showcases and celebrates teams from historically black colleges and universities, will feature the South Carolina State Bulldogs of the Mid-Eastern Athletic Conference and the Southern University Jaguars of the Southwestern Athletic Conference. Kickoff is set for 1:30 p.m. CT Sunday, Sept. 3, at Ace W. Mumford Stadium in Baton Rouge and will be televised live on ESPN2.

You can vote here.

First presented in 2008, the award is named in honor of the late Chicago Bears great Walter Payton, a former All-American running back at Jackson State University and a member of both the Pro Football Hall of Fame and the College Football Hall of Fame, who spent his entire NFL career with the Bears. Voting for the award, which recognizes exemplary student-athletes, opened Monday and closes Aug. 24. Winners will be announced at the MEAC/SWAC Challenge welcome banquet at the Hilton Baton Rouge Capitol Center on Sept. 2 and presented by Payton’s son, Jarrett, who has been the award’s biggest cheerleader.

A three-year starter and third-team All-MEAC selection last season, Ishmael finished the season starting in all 11 games and is considered one of the top centers in the MEAC. Ishmael anchored an offensive line that amassed more than 3,200 yards while allowing 13 sacks. “Ishmael is not only a good football player but a better student off the field,” head coach Oliver “Buddy” Pough says. “He has a long tradition of being a Bulldog; his mother played volleyball here, and his father played football here at South Carolina State.”

A preseason All-American selection, the 2016 MEAC Defensive Player of the Year lived up to expectations, leading the MEAC with 124 tackles, 14.5 tackles for loss and four forced fumbles while collecting a season-high 19 tackles in a loss against FBS national champion Clemson last September. Leonard has been named to several preseason All-American teams and last season was a finalist for the Buck Buchanan Award as the top defensive player in the FCS. “[Darius] is one of the most versatile players to suit up for the Bulldogs during this era,” Pough said of Leonard, who also earned All-American honors from STATS FCS, AFCA Coaches, Sheridan Broadcast Network (SBN), Boxtorow and HERO Sports. “He can play on both sides of the ball at wide receiver and linebacker, needs just three more tackles to become the all-time leader tackler in school history.”

A first-team All-MEAC selection last season, Taylor finished the season second on the team in tackles with 83 (54 solo), 10.5 tackles for loss for 25 yards, 1.5 sacks, one fumble recovery and two forced fumbles. “Dayshawn is a very physical player who takes no plays off, and you can always depend on him to make a big play,” Pough raves of Taylor, who is considered one of the top linebackers in the MEAC.

The 5-foot-10 senior has proven his worth to his defensive-minded head coach over his career, playing with relative ease in both press man coverage and in zone coverage. Maybe that’s why Southern coach Dawson Odums can’t stop raving about him. “Danny has been a mainstay in our program for four years,” Odums says. “He’s a graduating senior, one of the top leaders on our football team. He also has a son that he’s a great father to. As a coach, if you don’t have any sons in your life, Danny Johnson would be the kind of guy that you would want to be your son. He’s great in the community, he’s great with his teammates, and he’s a 3.2 student. He’s everything a coach looks for — he’s one of the better players I’ve ever coached.”

At 5-foot-11, 245 pounds, Preston is his team’s physical enforcer, and the numbers back that up. “Kentavious is a young man that has played a lot of snaps for us,” Odums said of the linebacker who led the team with 69 tackles last season. But Preston is more than just a speedy ball-stopper. “He’s already graduated No. 1 in his class in the College of Business,” Odums continued. “He’s an exceptional young man with a [3.4] GPA that brings great leadership to our football program. He’s outstanding in the community, is great for our football program and will be great for society.” Numbers don’t lie. 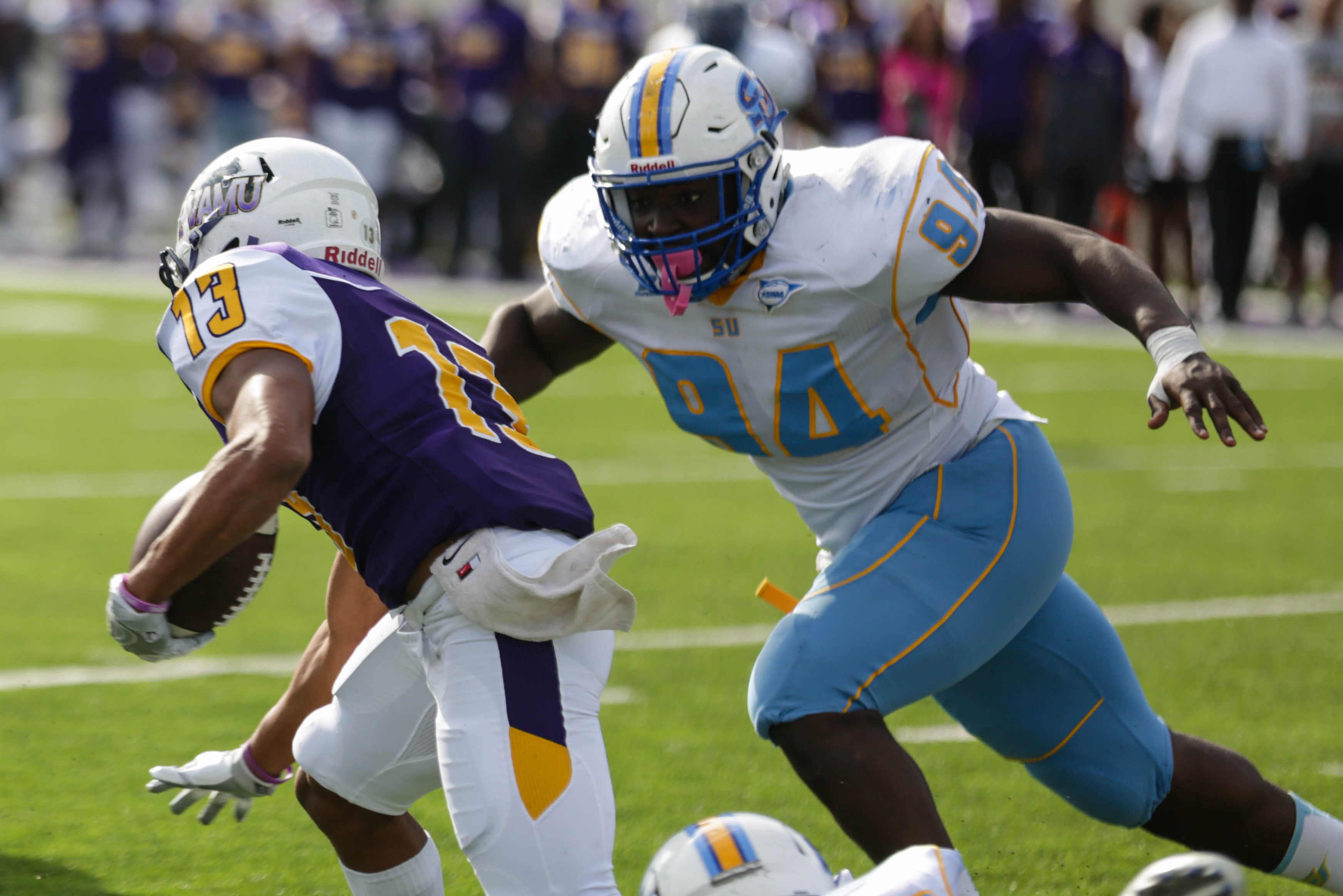 Coach Odums has always known that Tiller had another level; that level came to life, for all to see, on Nov. 12 versus Prairie View A&M. Tiller had a monster game, finishing with 13 tackles, 5½ tackles for loss, four sacks, a forced fumble and a fumble recovery for a touchdown. “This was an unprecedented performance for him,” Odums said after the 44-34 Southern win. “Four sacks in a game where you had to make some plays at a time when we had to have them.” Odums is still high on Tiller, calling him one of the greatest push rushers he’s ever had the chance to see in football. “He is one of the better football players in FCS, if not FBS,” Odum continues. “His attitude, work ethic, and strength are characteristics that make him special on the football field.”