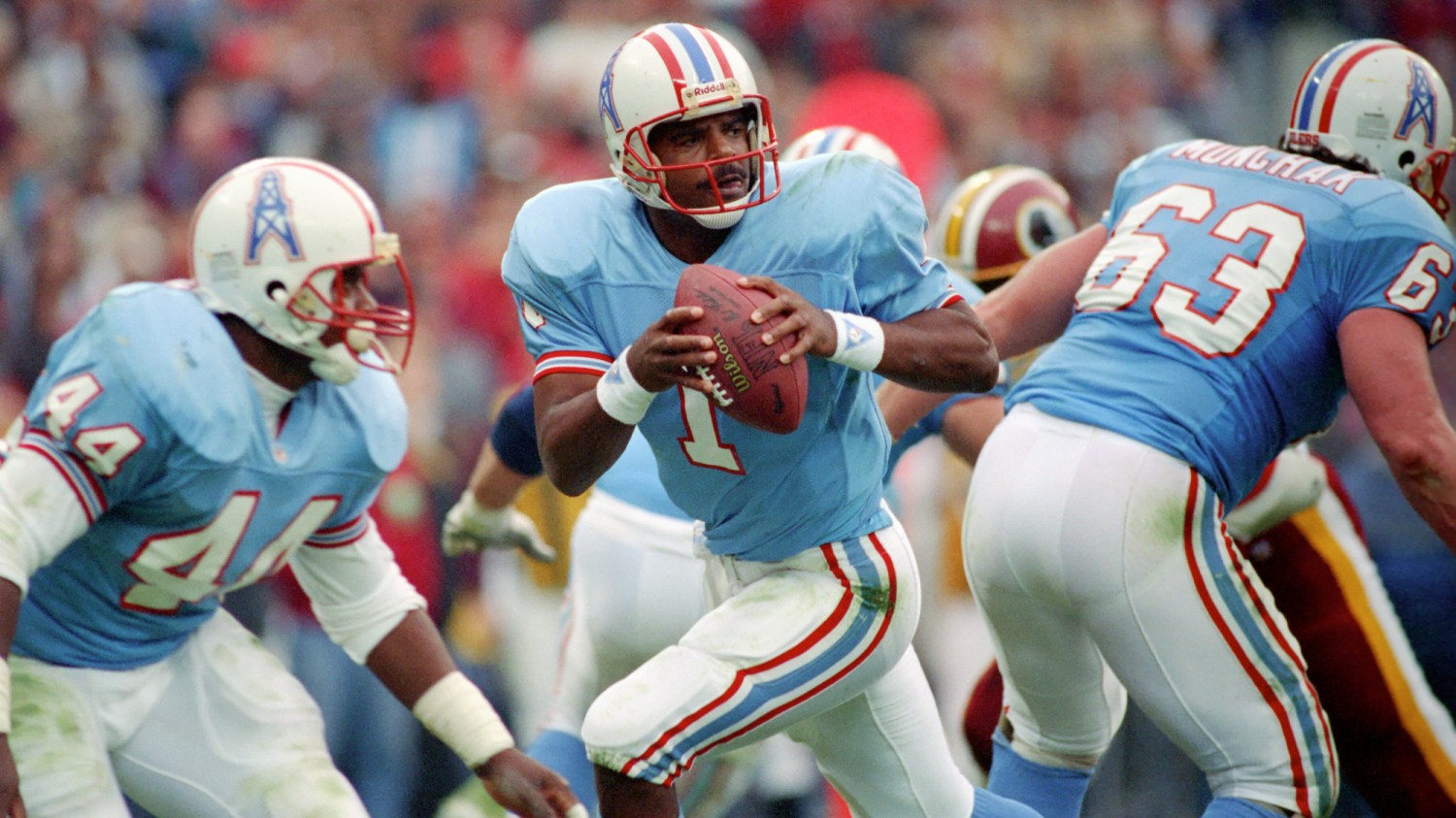 Warren Moon dreamed of playing in the NFL, but the NFL didn’t want Moon. At least not at quarterback.

The Hall of Famer dominated in Canada before getting a chance to play quarterback in the U.S.

Warren Moon stays busy. The only African-American quarterback in the Pro Football Hall of Fame, Moon is an analyst on Seattle Seahawks broadcasts. Throughout the NFL season, his work with the team keeps him on the go. But it’s Moon’s other role as a mentor to young black passers that occupies much of his time. He wouldn’t have it any other way.

Whenever he’s asked to help, Moon eagerly provides his counsel. The conversations could be as simple as how to best identify certain defensive coverages, or as serious as how to cope with the pressure of playing quarterback at the highest level. No matter the subject, Moon provides sage advice.

Moon has served as an adviser to Carolina Panthers signal-caller Cam Newton. He also has an unofficial role as a sounding board for the Seahawks’ Russell Wilson. Moon’s positive influence on both stars is reflected in their development as elite passers.

The Hall of Famer possesses unique wisdom, born both of a spectacular 17-year NFL career and the experience of a black man who thrived in the face of racism. Moon possessed the necessary combination of talent and inner strength to succeed despite the barriers placed in front of him. These days, he wants to help others achieve their dreams.

“I’ve always felt that whenever a young guy comes to me and wants my help, I want to be there for them in any way I can,” Moon said. “There’s a lot that goes into playing quarterback in the NFL, and there’s a lot more that we have to deal with. I always wished that I could have had someone like me to talk to when I was coming up. But the truth of it is, there weren’t any of us like that back then.”

Moon came up in an NFL era that couldn’t end fast enough for black folk. And Moon wrote the book on it.

In Never Give Up on Your Dream: My Journey, Moon chronicles the racism he encountered. Most black players of his generation, and definitely those who came before Moon, could tell similar disheartening stories. Repeatedly pushed to move to another position by coaches who assumed he lacked the smarts to play quarterback, Moon, believing he had the chops to lead, never gave up.

“You have to look at the history of pro sports in this country to understand how slowly things changed in the NFL with certain positions,” said Moon, who went undrafted out of college and received an opportunity to play quarterback in the NFL only after he obliterated passing records and won multiple championships in the Canadian Football League. “In football, the ‘thinking’ positions down the middle — quarterback, center, [inside] linebacker — were the ones that we weren’t allowed to play.

“Despite the fact that there were a lot of African-Americans playing in the National Football League in the ’50s, ’60s and ’70s, there was a stereotype that we weren’t capable of succeeding at certain positions. If you played those positions in college and you got drafted, you knew you were probably going to get moved in the NFL. Supposedly, we weren’t smart enough or had the leadership qualities or whatever it took. At every position, for African-Americans, conquering that myth at quarterback was so important.”

Moon played a big part in finally changing the wrongheaded thinking. Because of racism, however, he had to go north to begin his groundbreaking journey.

As a senior at the University of Washington, Moon was selected the Rose Bowl MVP. Then, Moon hoped to fulfill his dream of playing in the NFL. The NFL, though, didn’t want Moon. At least not as a quarterback.

“You just have to keep believing in yourself,” Moon said, “and go wherever you have to go to prove you can do it.”

In five seasons in Canada, Moon balled out.

He racked up massive passing numbers while leading his team to multiple championships. Moon accomplished so much that the NFL came after him. After a bidding war, the Houston Oilers signed Moon. After an inevitable adjustment period, Moon proved that he was a superstar in any country.

During both the 1990 and ’91 seasons, Moon led the NFL in passing yards, producing almost 9,400 combined. In 1990, Moon was chosen the Associated Press Offensive Player of the Year. He was selected to nine Pro Bowl teams. For a long stretch in the 1990s, Moon was as good as any passer in the game, Doug Williams said.

“Man, Warren was a great quarterback,” said Williams, the first African-American passer to win a Super Bowl and Moon’s close friend. “He didn’t get a chance to come right into the league, but once he finally got in there was no doubt about how good he was.

“You couldn’t deny it because he went out there and did it. You saw it with your own eyes. And I’ll tell you this: You better believe there were a lot of teams that wished they hadn’t passed on Warren [when he came out of Washington].”