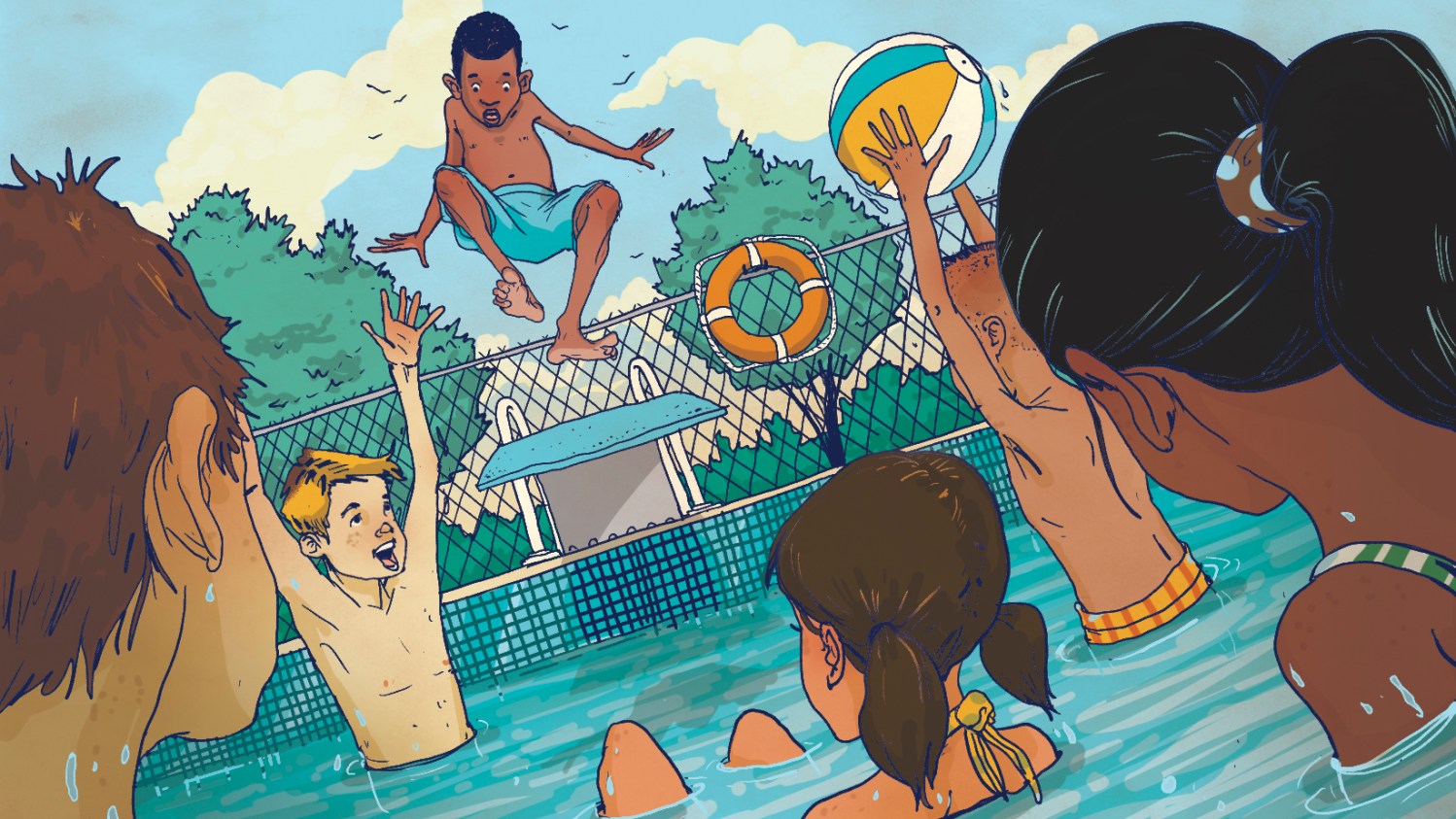 It was at the apex of my jump off the diving board at Virginia’s Pocahontas State Park when the realization of death hit me. Before moving on with the story, let’s paint the scene a little clearer.

A young Tins, of about 12 or 13, was enjoying summer vacation. Pocahontas was the Fancy Pool, located in Chesterfield, Virginia, not too far from Richmond. The pool attracted people from all over the area. It was supposed to be a cool way to meet girls — though in hindsight, I’m not even sure I knew how to talk to the opposite sex at that time. But a certain proof of masculinity did come from jumping off the diving board. Girls would look and laugh at all the crazy stunts boys would do jumping from the diving board. So, one day, a couple of the homies decided to do that — to jump off the diving board. They could swim. As for myself? I never really learned.

My stepfather had tried to teach me. And I did get the whole moving arms and legs in unison thing. Call me Young Phelps when it comes to that. I just never mastered the most important part. You know, the whole turning your head and breathing part. Every time I tried, all I got was a mouth full of water, eyes full of tears from coughing and a bruised ego.

Anywho, back to the diving board. There’s like three or four of the homies in front of me. They’re all hype, already pointing to the girl they’re trying to impress. As for myself, I’m walking to the diving board and it’s feeling like a scene from a Spike Lee movie. You know, where the character isn’t really moving but everything around him is? The only thought running through my head was a simple one: Dog, get your ass off this diving board. You can’t swim. WTF is wrong with you? You gon’ die, n—-. Yet on the surface I was as cool as Aaron Rodgers on a fourth-quarter drive. I walked to the diving board with a Diddy bop. Kids were laughing and yelling at each other. Lifeguards were posted, monitoring the scene. And even more people were laid out working on their tan. The only calming presence in my mind was from Kevin McCallister in Home Alone.

So, I jumped. And as I said before, at the height of the jump, that’s when I figured I was about to die. All because I wanted to impress a girl who, if she walked in front of me right now on the streets of Washington, D.C., I wouldn’t know who she was.

I looked down, and all I saw was water. Not the bottom of the pool. Just water. I thought about what they’d play at my funeral. Maybe Boyz II Men’s “It’s So Hard To Say Goodbye To Yesterday.” Or maybe Bone Thugs-N-Harmony’s “Crossroads.” Or maybe Master P’s “I Miss My Homies.” I thought about my mom, who probably would have saved me, only to kill me again for doing something so stupid. Whatever the case, when I hit the water, that’s when full panic mode struck.

The only thing you hear underwater is the water around you and your own thoughts.

Not being a great swimmer and not being able to feel the bottom of pool’s floor is like receiving a “We need to talk” text from your girl at 7:30 a.m. and you won’t see her again until that night. You’re that Mr. Krabs meme. Your day’s ruined, wondering what the hell you need to talk about, what the hell you possibly did and what the hell you’re going to do to get out of whatever prison sentence she’s ready to give you. But being in the pool is like 100 times worse. The only thing you hear underwater is the water around you and your own thoughts.

Honestly, I’m not sure how I got out of the pool. The damn lifeguard just looked at me, didn’t even bother to come help. To her credit, she probably didn’t know what to make of it. I had been flailing. As for the homies? They laughed. Hell, we all laughed. We still laugh at this. As for the girl I was trying to impress? Couldn’t tell you. I was just happy to be alive.

The overwhelming majority of my homies are great swimmers.

Fast forward. I’ve got quite a bit more facial hair, I’m a little wiser and a lot more versed in a lot of things. But I’m still not a great swimmer. And by “not a great swimmer,” I really mean “I don’t swim at all.” I view learning to swim at 30 the same way the late Biggie Smalls viewed trying to rap at 30. “I don’t wanna be the 30-year-old rapper, man. I really don’t,” he told ego trip magazine in 1997. “I figure like this, I started rappin’ when I was 20, 21. If I ain’t seen what I want in nine years in the game, what am I here for? If I ain’t got everything I want out of this game being in the game so long, obviously this ain’t the right game for me.”

Is it fair to equate swimming, a life skill, to rapping? Probably not, but it makes sense to me. And so if I haven’t learned to swim by 30, then maybe it’s just not for me. Shaquille O’Neal never learned to shoot free throws and he’s getting inducted into the Hall of Fame in a few weeks. Despite being aquatically inept, maybe I’ll win a Pulitzer Prize one day or something. Or not, but you get where I’m going with this. 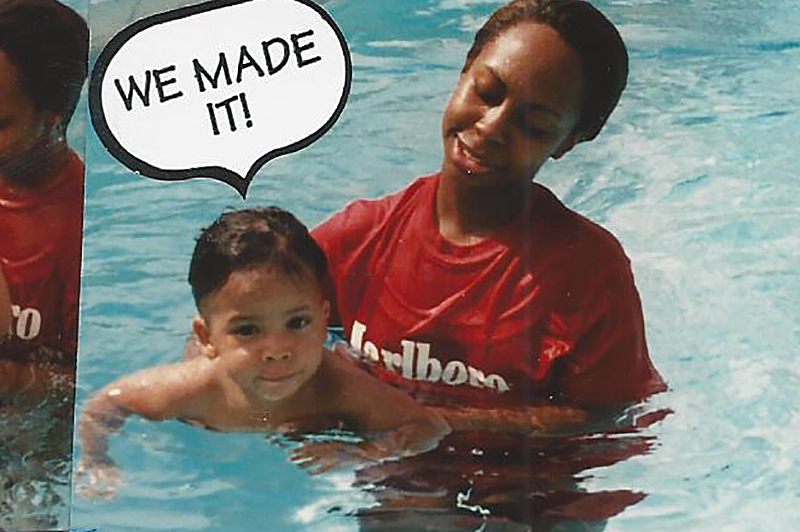 Yet, even to this day, I love the water. I love going to pools. I love the beach. As with anything in life, though, a man must know his limits. And once the water goes over my head, it’s time to head yonder to safer pastures. I also say this happily knowing I’m the minority. There’s this stereotype that’s been prevalent in the black community that black people can’t swim. To keep it G with you, I’m one of the few black people I know that can’t. The overwhelming majority of my homies are great swimmers. They can teach my kids. Because I’m going to be a great father one day. One so good that when they go on to accomplish great things in life, they’ll thank me the same way J.R. Smith thanked his dad in June after winning the NBA Finals.

I’ll teach them how to ride a bike. How to tie a tie. How to practice proper sports fan etiquette. How to get the most out of life with their God-given talents. The only thing I won’t do is teach them how to swim. But I’ll make sure they do. I don’t need my future son, Tupac Malcolm LeBron X Tinsley, being on a diving board trying to impress a girl he won’t remember.