‘With the platform I now have, I definitely have a chance to help younger Black female athletes more’

It’s a moment, for Odicci Alexander, that occurs often while scrolling through her social media accounts. She’ll come across the video of the final moments of her college softball career, which shows her walking off the mound to a standing ovation during the 2021 Women’s College World Series.

It’s an incredibly emotional moment with almost every fan in the stands standing and applauding Alexander’s efforts.

And Alexander, when she sees that video, just keeps scrolling.

“I try not to watch, because it makes me cry,” said Alexander, the breakout player during the WCWS who led unseeded James Madison to the semifinals of the tournament with shocking wins over top-seeded and eventual champion Oklahoma, and fifth-seeded Oklahoma State. “That was my last pitch of my college career and we were losing. The crowd giving me a standing ovation helped me out a bit, but also made me cry a little bit more.”

While Oklahoma would triumph in the WCWS, Alexander, the 2021 Softball America NCAA Pitcher of the Year, won over a legion of sports fans with her performance during a tournament that not only concluded as the most-viewed but also outperformed the Men’s College World Series.

Alexander, riding that record level of exposure, brings her growing popularity to the Athletes Unlimited softball league, which opens its second unique five-week season on Saturday in Rosemont, Illinois.

The Athletes Unlimited league is softball with a wrinkle: Players are drafted onto a different team each week with an individual being anointed the champion in lieu of a team. Alexander was drafted onto the team of Cat Osterman, last year’s Athletes Unlimited champion, who’s won three Olympic medals (gold in 2004 and silver in 2008 and 2021) while pitching for the USA women’s softball team. 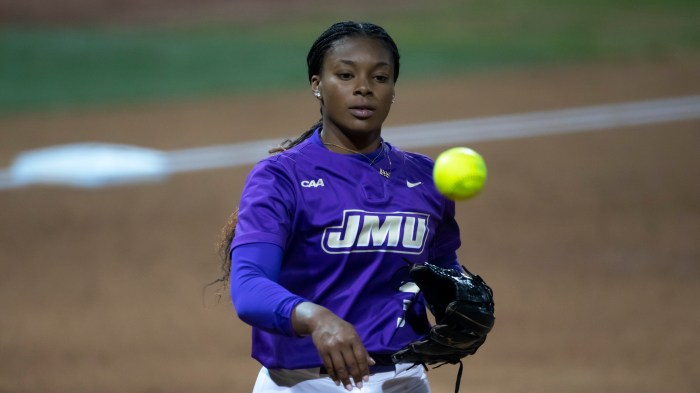 “The draft was exciting, and it definitely gave me jitters,” Alexander said. “We’ll see how the first game plays out, and what my role will be. I’m looking forward to playing with everybody, from the younger athletes to the players that I’ve idolized for years.”

Alexander wasn’t an overnight sensation. She was the Colonial Athletic Association Rookie of the Year as a freshman, and the CAA Player of the Year as a sophomore when she led the team in RBIs while finishing with a 25-8 record on the mound.

After the pandemic cut Alexander’s senior season short, she came back as a redshirt senior and received a long list of honors, including the CAA Pitcher of the Year and earning a spot on the conference first team.

But Alexander’s life took a 180 with her performance at the WCWS, where she not only earned the respect of the players and coaches of the nation’s top programs, but also the admiration of adoring fans.

“Everything has happened all of a sudden, and I’ve just been going on and going and going since the College World Series,” Alexander said. “While it’s been overwhelming to a point where you say is this ever going to stop, I’m just embracing everything and enjoying the moments.”

Like the invite to The ESPYS, where she walked the red carpet as a nominee in the category of best college athlete in women’s sports.

“I was grateful for the opportunity, and being there and seeing all the celebrities – I was like, ‘Is that Tracy Morgan, in person?’ ” Alexander said. “I met Sha’Carri Richardson and a ton of other celebrities, and took pictures with some of them, including a few wrestlers. But I was really fangirling over Taye Diggs when I saw him and should have said something to him, but didn’t.”

Now, softball fans are fangirling over Alexander. After debuting with the USSSA Pride over the summer, she often looked into the stands each game and noticed young girls wearing her jersey and screaming her name.

“That warmed my heart, and I probably signed every jersey that I saw worn at games,” Alexander said. “I love it. It’s a sign that softball is growing, and that’s what we all want to see the sport do.”

Alexander also has a growing following of Black girls who have expressed their interest in the sport following her emergence in the WCWS.

“When I got to the College World Series, I didn’t know I would have a chance to inspire so many people, and with the platform I now have, I definitely have a chance to help younger Black female athletes more,” Alexander said. “When I came up, I was often the only Black girl on the team, and I never had the best gear. The message I send to them is, ‘Guys, you can do whatever you want to do. Just be the best version of yourself.’ ”

Alexander has come a long way from the high school player who had no college offers until then-James Madison coach Mickey Dean saw her at the Virginia high school state championship semifinal in 2014. Dean was there to recruit another player, but could not take his eyes off of Alexander.

“As I watched, I thought to myself, ‘I want her,’ ” Dean, now the softball coach at Auburn, told The Undefeated in June. “She was the best player on the field. Powerful. Determined. Her team really shouldn’t have been competitive with the team they were going against. But she kept them in the game.”

Dean wound up making Alexander her first Division I offer.

​​”Sometimes I do look back at that and say, like, what if I didn’t play softball. What if I didn’t go to college?” Alexander said. “But I always talk to God, and God had a plan for me. He planted me at a place, JMU, where he wanted me to grow.

“I’m just happy and grateful that I had the chance,” Alexander added. “That gave me a chance to play D-1 college softball, and put me in a position to get to where I’m at today.”