Welcome to the Todd Gurley show

The new face of L.A. Football is a man of few words and many yards. Are you ready to be entertained?

By Jason Reid September 8, 2016
An ESPN The Magazine collaboration.

The crowd at Rams training camp in Irvine, California, is eager to get home. Practice wrapped 30 minutes ago, and the late-afternoon sun is hotter than preseason NFL buzz. Most days, Todd Gurley works the rope line just off the right corner of the field. Put something in front of the running back, he’ll sign it. Point a camera at him, he’ll pose. Need a shoutout, he’s got you. He’s all about the fans. Today, however, the fans have to wait.

Gurley stands on the hashmarks, waxing poetic. He’s on a roll about Rams running backs from days gone by, straight-up lecturing on the football magic of Eric Dickerson, Marshall Faulk and Jerome Bettis.

“Man, those guys are legends,” he says. “They played for a long time and did stuff guys only dream about. I’m young. I’m just getting started. … I’m trying to get there, for sure.”

Forgive the requisite Hollywood tie-in to the Rams’ return to LA, but Gurley is a running back straight out of central casting, despite—or maybe because of—his surgically reconstructed left knee. Just try to find a young back right now with a better combination of cutback ability, speed and power. Or one more motivated to prove that his Year 1 splash—1,106 yards and AP Offensive ROY in just 13 games—was just the beginning of a built-for-the-long-haul career.

The problem isn’t Gurley’s potential. It’s that the Rams, after 21 seasons in St. Louis, are all about the LA life now. And they’re not returning home with a winning touch—they haven’t had that in a long time. So Gurley doesn’t have time to try to get there. After last year’s 7–9 season, the Rams need him to carry the offense, at least until rookie QB Jared Goff gets his stance under him.

They called Los Angeles home for 49 years, but the Rams are now nomads, with team operations spread throughout the city, Ventura and Orange counties. They need to win back fans they abandoned in the mid-1990s and attract a new generation of ticket buyers without much of a sizzle reel. The Rams haven’t qualified for the playoffs since 2004. They last had a winning season in 2003. In the short term, all the fuss around “The Return of Football to LA” will drive attendance. But as any team owner, big market or small, will tell you, it takes victories and marquee names to keep the people coming back.

Goff is part of the plan. Los Angeles leveraged some of its future by trading six draft picks, including two first-rounders, for the right to pick him first overall this year. (It also got two back). The Rams are exercising patience with their rookie QB in the early going, though, and all the hits he took in the pocket during preseason show it might be awhile before he catches up to the speed of the NFL game.

It’s Gurley who has to put butts in seats. Since he came into the league, he has made a habit of oh-wow moments. Remember that ridiculous 71-yard touchdown run against the 49ers in Week 8, when Gurley sprinted through a hole untouched and outraced safety Eric Reid the final 53 yards? Doesn’t seem right that someone can move so fast at 6-foot-1 and damn-near 230 pounds. A week later brought an SMH touchdown against the Vikings. Hit by two defenders after leaping from about the 3-yard line, Gurley maintained his balance and broke a tackle before spinning into the end zone. And for overall degree of difficulty, check Gurley’s 5-yard scoring run in Week 14 against the Lions. Running to his left after a deep handoff at the 10, Gurley got to the corner, took off again from a few yards out, but this time he adjusted his body in midair to elude safety Glover Quin, essentially dunking the ball into the end zone near the pylon.

Watching Gurley at field level, it’s the cutbacks that get you. Just ask Mike Shanahan. In 20 years as an NFL head coach, no one was more committed to the running game—or had more success at it with a variety of backs, from Terrell Davis to Clinton Portis to Mike Anderson. Shanahan sees Gurley helping Goff get in the game.

“With a back like that, teams have to play the run with gap responsibilities,” he says. “[The quarterback] can sit back in the pocket because [the defense] has to play run first. … And he’s a lot like Dickerson, where any time he touches the ball he has a chance to go the distance.”

Gurley last season became the first rookie in NFL history with at least 125 rushing yards in four consecutive games. In Rams history, only three rookie runners have gained at least 1,000 yards: Dickerson, Bettis and Gurley. But the most telling number from 2015 was 47. That’s the number of tackles he broke, according to Pro Football Focus. Seventh highest in the league at his position. As a rookie. “There are backs in the league who have quickness and acceleration,” Fisher says. “But he’s violent after contact. At the same time, as a defender, you know he’ll make you miss as quick as he’ll run over you.”

That’s what’s been giving offensive coordinators around the league Gurley envy. Any one of them would gladly script plays for the guy who was 29th in ESPN’s 2016 ranking of the NFL’s top 100 players, tops among second-year pros and the second running back, behind No. 12 Adrian Peterson. “Rare combination of balance and elusiveness,” one NFC East offensive coordinator offers. “He is a great finisher with excellent instincts in the hole, and he gets to the second level in a hurry.” Says an NFC South offensive coordinator, “What separates him from other guys … is he can make his cuts without slowing down. He is through the hole before it closes. The pursuit can’t get there.”

Or as Dickerson more succinctly puts it: “This boy can run.”

Gurley missed four games of the 2014 season at Georgia, serving a suspension after receiving more than $3,000 for signing memorabilia. His first game back was against Auburn. With 5 minutes and 21 seconds remaining in the fourth quarter and Georgia leading 27-7, his left leg planted awkwardly on a 6-yard run. He tore his ACL and was out for the season. 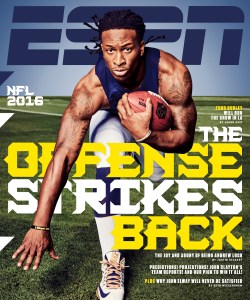 A franchise back is the player you’re waiting to see get up after the others peel themselves off the pile on top of him. Eddie George, in an interview with Esquire last September, defined the running back role as “me and 11 defenders trying to take me down.” This time, Gurley didn’t get up.

After nearly a year of rehab, he fell to the Rams at No. 10 overall in the 2015 draft. “These guys only come out once every 10 years,” Fisher told the NFL Network last season. “We had done all of our research with the knee. We were just hopeful that someone didn’t trade up ahead of us.” They limited his work in camp and continued to pump the brakes once the season began, not fully integrating him into the offense until Week 4. With the Rams out of playoff contention, they sat him in Week 17.

But in between, he was a workhorse. According to ESPN Stats & Information, Gurley accounted for 27.2 percent of the Rams’ scrimmage yards last season, the seventh-highest such percentage of any player in the NFL. If you count only the 13 games he actually played, he topped the league at 35.8 percent of his team’s yards. That’s Adrian Peterson (33.2 percent) territory.

And there are no doubts that Gurley’s touches will go up. Shortly after the team drafted Goff, GM Les Snead said, “Don’t worry about throwing the ball, you have to learn to turn around and hand it to 30.”

Until a player comes back from a ligament tear, there’s a chance he won’t. But Gurley was drafted in 2015, not 1915. Nowadays injured athletes have decent odds. That’s what Dickerson thought while he waited for Gurley’s name to be called. “I really was shocked [he slipped to 10th],” he says.

Nine other teams had a chance to get him. Now they have to stop him. “They’re mad at themselves,” Bettis says. “That’s one of those situations where some teams say, ‘Ah, no, we can’t pick him in the first round … coming in with an ACL injury.’ Well, everybody who doubted him, he proved them wrong.”

What Gurley himself doesn’t yet know is what it will be like to be the man, to be the load bearer, to take the beating you take when the defense knows the QB’s job is to turn around and hand it to 30, maybe 30 times a game, for a full 16-game season. What he doesn’t know is what it’s like to do that in a city that has been hungering for football so long, their memories are on VHS tapes in a box in the closet. What he doesn’t yet know is what it will take to do that, week in and week out, for a coach who addressed a preseason team meeting on Hard Knocks by saying, “I’m not f—ing going 7–9.”

Case Keenum, the Rams’ likely starting QB (for now), drops back and rushes a swing pass that looks to be out of anyone’s reach. Gurley pops out of the backfield somewhere, races past several now-burned defenders and catches the ball just along the right sideline as if it had been meant for him all along. As it went last season, so it goes in training camp. Time after time, Gurley darts into an opening that seems too small for a runner half his size and emerges on the other side of the crowd with the ball. He makes it look easy. There’s no question who the best player on the field is.

He hears the buzz. Does he know what people are saying about him, the potential they think he has? Gurley nods quietly. He’s heard similar stuff since he was a high school standout in football and track growing up in tiny Tarboro, North Carolina. But he knows he’s not in Tarboro anymore, or St. Louis either. “There’s definitely a lot going on out here,” Gurley says of LA. “Everywhere you look, you got the best of the best out here, it’s crazy.”

He deflects talk of himself to talk of the team, his O-linemen, and you can see their connection. After running plays in practice, linemen hustle to help him up, a sign of respect. When he breaks off a long run, teammates cheer and share in the excitement. “I just come in and try to be me,” Gurley says.

As he finally approaches the rope line at the Rams’ practice field, the crowd has grown and fans are chanting, “Gur-ley, Gur-ley, Gur-ley!” Moments before, looking out at the field, maybe soaking up the moment, he takes it back, the way the NFL’s greats have done for years: Pretend the pressure isn’t real and talk football.

His no-worries quote game is already legendary: “It’s a game you’ve been playing for your whole life—that part hasn’t changed,” he says. “So just go out and play. Just do what you know you can do.”