Phoenix Suns head coach Monty Williams momentarily took his focus away from the NBA Finals at the end of practice on Friday. In front of all his players, he wanted to take the time to congratulate assistant coach Willie Green, who is expected to be named head coach of the New Orleans Pelicans after the Finals.

This will be Green’s first head coaching job after five years as an assistant. And on a larger scale, Green is among seven Black coaches who will fill the eight available head coach openings in the NBA this offseason, representing long-awaited progress for African American coaches in a league predominantly made up of Black players. Heading into next season, 13 of the league’s 30 coaches will be Black, one will be Latino and one Asian American.

“The last few weeks have been really cool in that regard,” Williams said. “The way I look at it is I just wanted everybody to have the same opportunities to get a job and I just think it’s important that African Americans, white, brown, it doesn’t matter, I just wish that every team would have a lengthy process so that guys would get the experience, that’s how I view it. I think when teams just pick a guy and not allow for younger coaches and African American coaches to at least go through the process, it’s hard, because we all need that experience so you can learn like, what I need to do, where my strengths are, where my weaknesses are.

“So I think the process is important for all coaches and as I’ve been pretty open about, I’m not looking for a leg up, I’m just looking for equal ground for everybody. So it has been pretty cool to see Chauncey [Billups] and Ime [Udoka] and guys that I’ve known for a while get an opportunity to be a head coach. At the same time, I just want everybody to be on the same equal playing field as it relates to opportunities.”

The state of Black NBA head coaches appeared to be on the rise during the 2012-13 season as a league-record 14 of the NBA’s 30 head coaches were African American. But at the start of the 2020-21 NBA season, there were only seven African American head coaches: Williams (Suns), J.B. Bickerstaff (Cleveland Cavaliers), Dwane Casey (Detroit Pistons), Tyronn Lue (LA Clippers), Lloyd Pierce (Atlanta Hawks), Doc Rivers (Philadelphia 76ers) and Stephen Silas (Houston Rockets).

In February, the Minnesota Timberwolves were criticized across the NBA, and most notably by the National Basketball Coaches Association (NBCA), when they fired head coach Ryan Saunders and hired his replacement, another white coach in Toronto Raptors assistant Chris Finch, on the same night. After the hiring, the association said in a statement: “The NBCA understands and respects each organization’s right to hire and fire whomever and whenever it chooses. But it is also our responsibility to point out when an organization fails to conduct a thorough and transparent search of candidates from a wide range of diverse backgrounds.”

Heading into this offseason, several NBA sources said the expectation was that most of the head coach openings could be filled by African Americans. According to NBA sources, the list of African American assistant coaches who interviewed for jobs included the Los Angeles Lakers’ Jason Kidd and Phil Handy, the Dallas Mavericks’ Jamahl Mosley, the Denver Nuggets’ Wes Unseld Jr., the Golden State Warriors’ Mike Brown, the Philadelphia 76ers’ Sam Cassell, the Milwaukee Bucks’ Darvin Ham and Charles Lee, the Brooklyn Nets’ Udoka and Jacque Vaughn, the Clippers’ Billups, the New Orleans Pelicans’ Teresa Weatherspoon and the Timberwolves’ David Vanterpool. Sources said Dawn Staley, USA Basketball women’s head coach and University of South Carolina women’s head coach, was another African American considered for NBA openings, but she was focused on the Olympics. 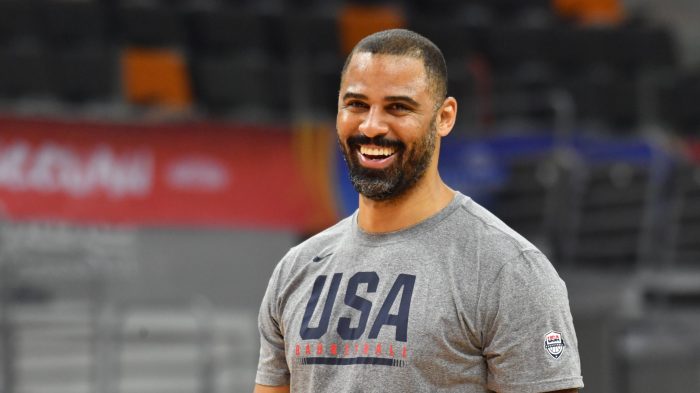 “I am encouraged by the recent progress,” NBA commissioner Adam Silver said to The Undefeated. “And, while we’re moving in the right direction, we must continue to work at it through programs like the Coaches Equality Initiative and by ensuring that our teams are looking at a broad and diverse pipeline of talent.”

Here’s a look at the seven Black coaches who were hired this offseason:

The Indiana Pacers, meanwhile, hired former Mavericks head coach Rick Carlisle as their new head coach. While Carlisle coached Dallas to an NBA title in 2011 and is the 15th-winningest coach in NBA history, the Pacers received criticism for their coaching search. The Timberwolves believed that the NBCA, which is led by Carlisle, failed to criticize the Pacers for the lack of a diverse head-coaching search as they did them, sources said.

Bickerstaff, who will be entering his third season as the head coach of the Cavs, is excited that the African American coaches hired all had respected credentials.

“It’s a nod to a long list of intelligent, talented and qualified leaders of men who happen to be Black but who weren’t hired simply because they were Black,” Bickerstaff told The Undefeated. “Instead they were hired based on their intelligence and skills.”