It was just a few days ago — Sunday night, to be exact — when Kevin Durant stood in an NBA arena wearing a Team USA basketball jersey as fans hammered him with vitriolic boooooooo-ing. But that was at the Staples Center, where jealous Los Angeles Lakers and Clippers fans reside, not Oracle Arena where Durant’s new fans live. On Tuesday, he got a taste of that fresh love.

With Team USA taking on China in an exhibition Tuesday night, Durant watched as the crowd at Oracle Arena erupted upon hearing his name called during introductions — they did so for more than 15 seconds. After the cheers, Durant went out and put up 13 points on 4-for-8 shooting in the 107-57 win. All it took was watching the man hit a single 3-pointer for his Golden State Warriors teammate Klay Thompson to say, “This could be a problem [for the league],” according to ESPN’s Ethan Sherwood Strauss.

No kidding. And if you missed any of Tuesday night’s tune-up, check out just how at home Durant looks with his new teammates and arena full of adoring fans:

Durant celebrating 3s while theyre still in the air — full heel turn to the Warriors is now complete https://t.co/RlZ15pZgTu

when your ex is prospering without you pic.twitter.com/NzYIc7Loio

Kevin Durant is being swarmed by autograph seekers, including one with this sign: "KD is not a villain." pic.twitter.com/zLsHYgZop4

In one corner, we have artist and former American Idol singer, Kelly Clarkson: 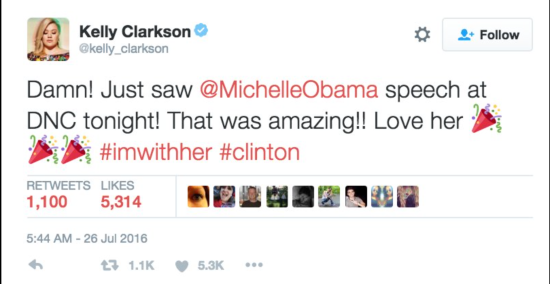 In the other corner, we have a disgruntled Twitter user:

The decision: Clarkson with the knockout in the first round: 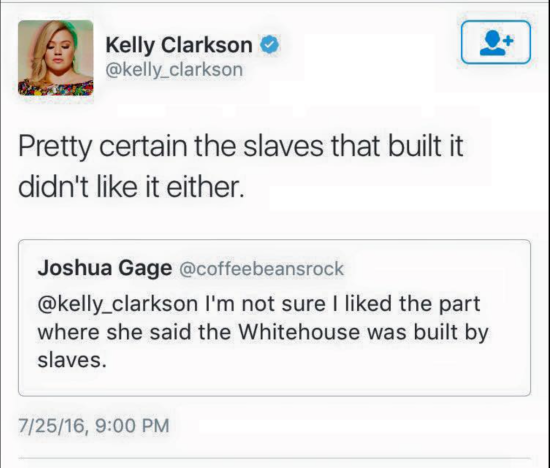 Also, The New York Times did a fact check on the statement that slaves built the White House, and *drum roll, please* determined that it was a true statement.

Do y’all realize how good a dunk in garbage time has to be in order to almost break Twitter?

DeMar DeRozan didn’t almost take one body. Oh no, he nearly snatched the souls of the whole Chinese national team with this immaculate 360 dunk Tuesday night.

The almost posterization quickly lit Twitter aflame with where the dunk would’ve placed all time.

Man if @DeMar_DeRozan would have made that dunk, would have been top 5 All Time! #USABMNT

If DeMar DeRozan pulls off 360 dunk on somebody in Rio, he'd give USA another Vince moment. Hopefully he's got hops in reserve for real show

No ma'am @DeMar_DeRozan let me find out you're about to give us a @mrvincecarter15 moment in Rio😳😆 Lets Go 🇺🇸 https://t.co/eDvOortbeP

There will be no charges in the case regarding the girl in Waco, Texas, who had a rope placed around her neck by her classmates, which caused severe burns. The family is proceeding with its lawsuit, The Associated Press reports.

For the first time in 25 years, an African-American club pro, Wyatt Worthington II, will play in the PGA Championship.

Here are some of the names of the slaves who built the White House.

BET released its “30 people 30 and under to watch for in New York” list, and Darian Harvin, a regular contributor for The Undefeated, made the list.

Amar'e Stoudemire retires with the Knicks. Let’s remember that time he interviewed in a bathtub filled with wine. pic.twitter.com/Y6zt07XbVP

Amar'e Stoudemire is retiring from the NBA.

A look back at the time we interviewed him in a bathtub of wine: https://t.co/TwKdOAmsuG

Our brother Jason Reid took a look at the inspiring career of former NFL coach Dennis Green, a true pioneer:

“He showed what we could do as coaches if we got the opportunity,” said Doug Williams, the first black starting quarterback to win a Super Bowl (with the Washington Redskins). “And Denny understood that getting the opportunity and doing something with it was all part of something bigger. Once he got in there, he gave other black coaches opportunities. He got there and remembered there were people coming behind him who also needed opportunities. It wasn’t just black coaches who had opportunities under Denny. But he helped a lot of black coaches.” Tony Dungy, who served as a Vikings defensive coordinator under Green, was the first black coach to win a Super Bowl. On Aug. 6, Dungy will be inducted into the Pro Football Hall of Fame in Canton, Ohio. Green took pride in the achievements of everyone who coached and played under him.

This Story Tagged: Kevin Durant What Had Happened Was DeMar DeRozan Beyonce