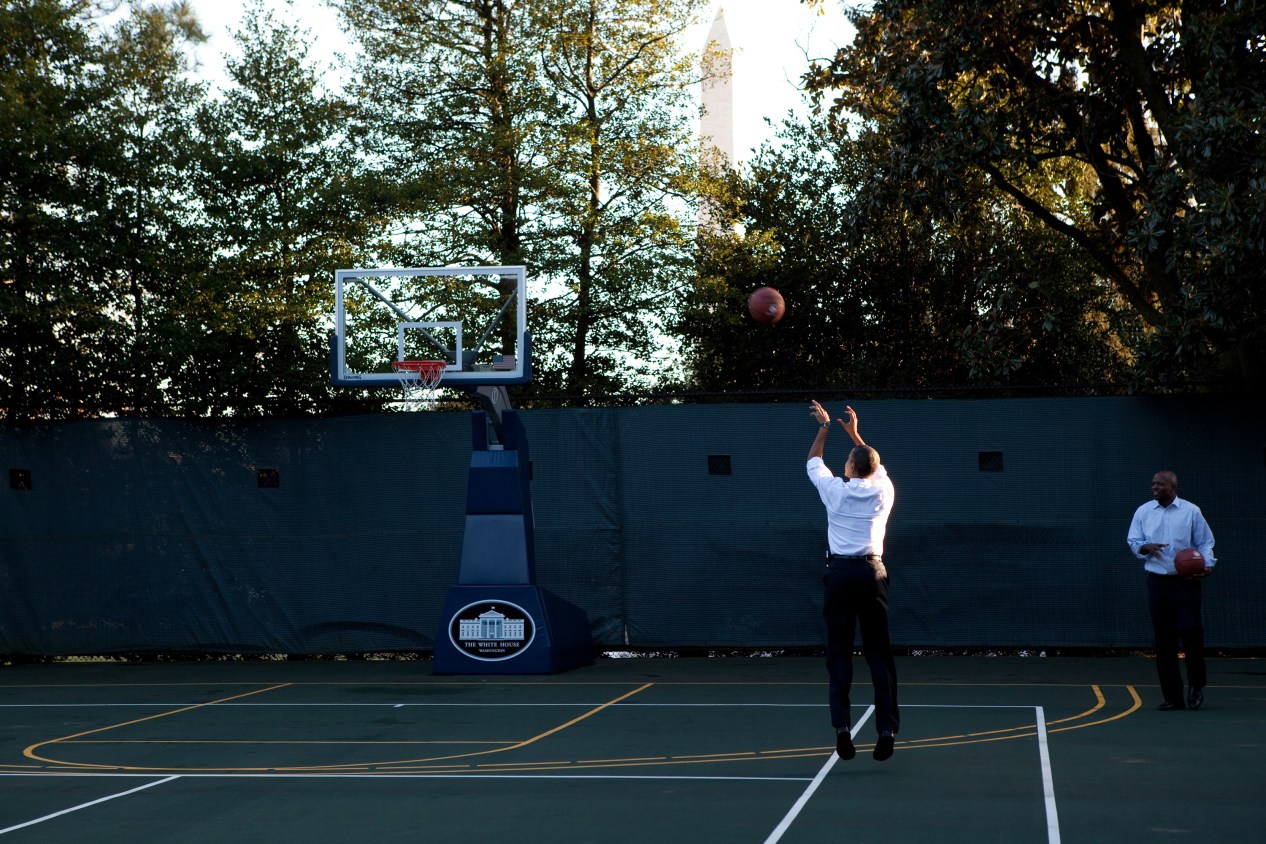 Will Trump get rid of the White House basketball court?

He hadn’t played full-court basketball in months, maybe a year, and most everyone who ran with him over the past eight years was expecting his shot, if not his 55-year-old ligaments, to be caked with rust. But rituals are rituals, and President Barack Obama would keep this one on his last election day in office.

Youth, as always, would be served by Reggie Love, the president’s former body man and a national champion from the 2001 Duke team, and his thirtysomething crew.

The president’s first shot went in that day. Then another. And another. They were mostly silky southpaw jumpers from a few steps left of the key, by a man who goes harder to his left on the court than Bernie Sanders and Michael Moore off it. All net, all morning.

“He was on fire,” Love recalled when we spoke Sunday, admitting that the old heads won. “He hadn’t played in a while, but he kept making them.”

Before midnight it was clear the executive branch would change parties. And the first president to have two stanchions and a full-length basketball court installed at the White House would be giving up the rock to Donald Trump. Lord knows whether he can shoot – or even wants to.

“What is going to become of the basketball court at the White House? Good question,” Love said.

Wherever you lie on the political spectrum, anyone who lives for the game – who sees in it the connective fibers of racial and cultural unity achieved by giving yourself to the good of the group – will be nostalgic about the Baller-in-Chief.

There was something about the first black president playing a predominantly black man’s game. Obama was every hoop junkie’s president, repping all that was good and right about Naismith’s game.

Oh, and using his power as the leader of the free world to put together his own fantasy birthday game was every hoop lifer’s dream.

Who among us – especially those who never played competitively past high school – wouldn’t use our executive privilege to summon living legends such as Bill Russell and Earvin “Magic” Johnson for our 49th birthday celebration, the way the president did in August 2010? He brought in contemporary stars, such as LeBron James, Chris Paul, Dwyane Wade, Carmelo Anthony and Derrick Rose and future WNBA star Maya Moore. He threw in Alonzo Mourning, Shane Battier, Chauncey Billups, Etan Thomas and Derek Fisher for good measure. Kobe Bryant watched from the stands. The game was played at Fort McNair in Washington before a wowed crowd of wounded veterans and youngsters in a White House mentoring program.

Obama played everywhere – Hawaii, Chapel Hill, North Carolina, during a campaign stop, Camp David. He required 12 sutures in his lip in 2010 when he took an elbow to the face. He co-opted a March Madness term for his own NCAA tournament picks (Barack-a-tology).

He used the White House court for not just photo-ops, but for a sanctuary – like the time he brought more than a half-dozen kids from his My Brother’s Keeper initiative to shoot hoops and talk about life. “He had a much nicer game than I thought,” said Noah McQueen, whom Obama helped mentor. “When we were out there, it didn’t feel like we were playing with the president. It felt like he was one of us.”

L.Z. Granderson made a strong case last summer in The Undefeated that the renaissance of social conscience among athletes may have been directly triggered by Obama’s last eight years – that, essentially, having a president who looked and thought like them politically emboldened African-American athletes to speak out like they haven’t since the 1960s and early 1970s.

“[Obama] is very approachable, he knows and loves the game … plus he’s a brother,” longtime basketball agent Bill Duffy said. “There’s a level of trust there because they have similar experiences. I would like to think the guys who have felt comfortable using their platform to bring awareness to things will keep doing so, but to be politically active, you have to do more than just bring awareness. You have to get involved and I’m not sure if the players will do that once President Obama is gone.”

“There was a common love, a common language spoken,” Duncan said of the relationship between Obama and NBA players. “It was a brotherhood, where you could blend race and hoops. Conversations would move from hoops to social issues and sports became what we all hope to become – that bridge to a better world. They could see the bigger sense of what’s important here.”

After Love finished his tenure at the White House and enrolled at Wharton Business School, he remembers receiving a text from Obama one afternoon, and thinking it was urgent. Instead, Obama had decided to coach his youngest daughter’s middle-school team and the president wanted him to design some plays they could run.

Obama even chatted up washed-up small forwards who, like him, had played high school ball in Hawaii.

I first met Obama in 2009, five days before his first inauguration, when he was visiting The Washington Post, where I worked at the time. When he stuck out his hand, I mentioned that I once played against the center on his state championship team, Dan Hale, in a summer league game. “We just played with Dan two days ago!” he said, and we chatted for a minute before Love handed me his card and said to call him regarding a possible pickup game.

Which I did. Twenty-eight times over, oh, eight years. (Actually, it was just a handful of times. It feels like a lot more when you’re bothering the commander-in-chief for a run.)

But I did talk briefly with the president at four basketball games he attended in his first four years, walking past the Secret Service to do the whole pull-in hug thing and act like I was one of the fellas.

Obama was always gracious and good-natured, even when I told him at a Duke-Georgetown game, “You know, us poor public-school kids from Campbell High in Ewa Beach should really one day play with you private privileged Punahou kids in Honolulu [the prestigious school Obama attended], just so the world can be one.”

Looking back, I wish I had asked him if Hawaii’s ethnic melting pot had made him see the world like me, if he remembered this cat on the University of Hawaii’s Fab Five team named Jerome Freeman or this skywalking star from Moanalua High named Sam Johnson, who once rejected my shot into the school band.

There are more important issues as inauguration day draws near. Still … the ball-playing president – what a novelty.

Trump and KellyAnne Conway, counselor to the president-elect, didn’t return messages from The Undefeated regarding the future of the White House basketball court. Perhaps there are some things more important to this country’s future right now than ball, like the possibility that millions of Americans could lose their health insurance. Or that any second now, Russian hackers could seize control of your Apple watch and your Sonicare toothbrush.

But the departure of the Baller-In-Chief is a moment worth marking – just as the future of the court he put in is.

“I guarantee you he’ll dig up Michelle’s garden,” the president told the Tom Joyner Show just before the election. “You think I’m joking?”

“No — and your basketball court, too!” radio host Joyner said, until the president talked over him, going on about Trump promising to undo everything Obama.

Love said his “assumption is [the court] stays there.”

“I don’t know how many changes [Trump] will make, since he’ll be in New York so much. But maybe the court is not that well-maintained anymore.”

When I visited the White House on Jan. 12, several staffers said they assumed it would revert to being a tennis court, which is how George H.W. Bush used the space.

Either way, we are unlikely to see another president so intimately connected to the game anytime soon.

“The one memory that still stands out for me is 2012, playing that [election] day in Chicago,” Duncan said. “Mitt Romney was trailing in the polls, but it wasn’t a shoo-in at all. I was panicked. I finally asked him, ‘How do you feel?’ And I’ll never forget his response: ‘I’ve got two great girls, a wonderful wife and everybody is healthy. I’m good.’

“Literally the weight of the world was on his shoulders and he was in absolute peace – his values and priorities extraordinary clear. The court was always the one place where he could be a normal human being.”

Love may have summed up the president’s influence through the game best: “My most impressionable times in life came with a guy named Barack Hussein Obama, who not only had a great love for the game of basketball, but also showed me how to appreciate life, how to be hungry for information, how to be empathetic, how to put yourself in someone else’s shoes – qualities you need in the game of basketball. That attitude and those principles – in the game and life – he exemplified it.”