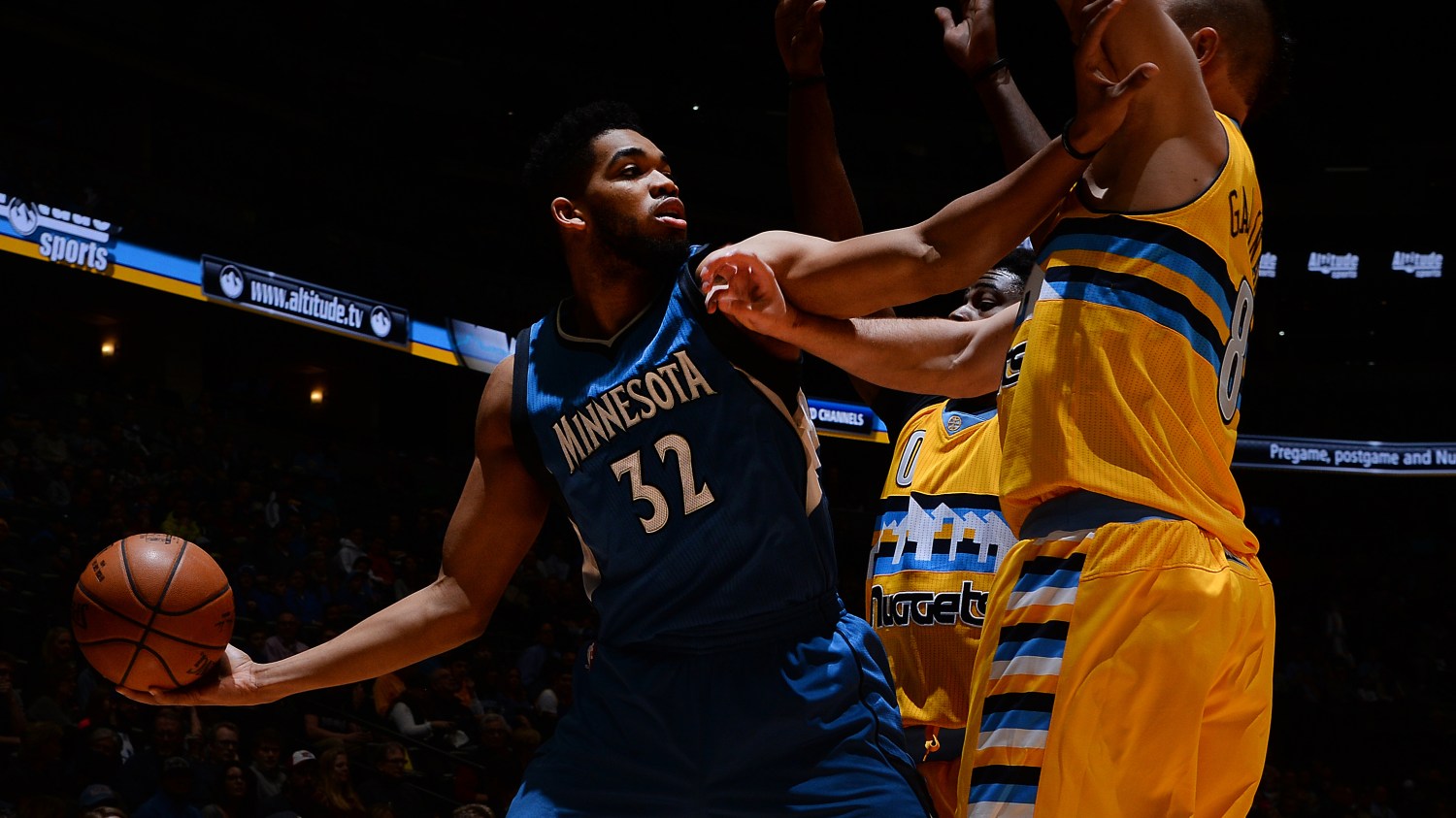 Karl-Anthony Towns #32 of the Minnesota Timberwolves handles the ball against the Denver Nuggets on December 28, 2016 at the Pepsi Center in Denver, Colorado.= Bart Young/NBAE via Getty Images
NBA

Dominican cuisine can be quite complicated, but Karl-Anthony Towns likes to keep it simple.

Sancocho, the Dominican Republic’s national dish, includes beef, chicken and sometimes even pork, all meats that are regular staples in most Dominican meals.

But whether it’s his food preference or his love for his mother’s Dominican heritage, the Minnesota Timberwolves big man is committed to what he truly enjoys.

“I love arroz con pollo,” Towns told The Undefeated. “I keep it really simple and plain, to the point. My mom makes some of the best chicken and rice and I know why. She makes it how my grandmother makes it and the recipe was passed down. There is nothing better than having some of mom’s homemade cooking.

“I keep it simple because my taste buds are so weird. I’m a very picky guy with everything. I don’t eat pastries. I don’t eat red meat. I don’t eat pork. I don’t even eat fish really. There are little [Dominican food] things that I like and enjoy it very much.”

Towns was born on Nov. 15, 1995, in Edison, New Jersey. His father, Karl Towns Sr., is African-American and his mother, Jacqueline Cruz, is a native of the Dominican Republic. Believing that the name Karl alone was boring, Towns’ mother and older sister, Lachelle, loved the uniqueness that a hyphenated name provided and added “Anthony.”

Towns got some early lessons on his Dominican heritage during weekend barbecues at his grandmother’s home in Perth Amboy, New Jersey. There was always lots of Dominican food. Towns and his first cousin, Michael Quezada, loved eating pollo empanizado (breaded chicken) with white rice beans and plantains. They always played basketball in the backyard, too, while listening to lively music in the background.

“What I really enjoyed was just being in the backyard barbecuing,” Towns said. “We had a lot of talking. Listening to music, that’s where my love for it started. Me and my family did a lot at my grandmother’s house. We always had, every Saturday or Sunday, barbecues at her house in the summer.

“We had a ball just talking to my family, my godmother, my cousins, uncles. Just sitting on the porch and enjoying each other’s company.”

“He ate a lot of chicken. His favorite plate,” Quezada said. “There was also nonstop basketball being played in the backyard until the sun set.”

There was always bachata, merengue and salsa music playing as well. Despite Towns’ unique height and big feet, his sister actually taught him how to dance. Towns said he has Latin music saved on his cellphone to play on special family occasions.

“My family loves to dance. They tried to grab anyone who was near to dance. The house was full of music. It’s just a lot of fun. A lot of great memories,” Towns said.

“He wasn’t much of a dancer back then,” Quezada said with a laugh. “He got some skills now.”

Towns said his mom took him on his first trip to the Dominican Republic when he was 15 years old. They visited Santo Domingo, the capital and largest city in the Dominican Republic. It was during this visit that Towns truly fell in love with his mother’s homeland as they took in the history, monuments and sites.

He described his first trip to the country as “special” and “important.”

“My whole life leading up to that point I’d only seen the USA. To see the way my mom’s country is, how beautiful it is, see a different side of the world, it was eye-opening. It was amazing. I had so much fun. I enjoyed it,” he said.

Towns rose to a height of 6-feet-11 by the time he was 16 years old and earned elite basketball skills to boot. ESPN.com ranked him as a top 10 prospect in the Class of 2014. It was safe to say that USA Basketball would have had strong interest in the American big man to compete in the 2012 London Games.

Towns, however, opted to play for his mother’s native Dominican Republic instead. In July 2012, he was introduced to the basketball world when he played against a USA team led by Kobe Bryant and LeBron James in an exhibition game.

There was no rematch though, as the Dominican Republic didn’t qualify. The country known for baseball dominance has never made an Olympic appearance in men’s basketball, while USA has won 15 gold medals in 18 appearances.

“It was really special to me,” Towns said. “It was a chance to represent my mother and a big part of my family. It was an amazing experience. I was very excited. When an opportunity like presents itself, it’s hard to say no.”

“I made my decision and I never look back on it,” Towns said. “I do everything I can to take [Dominican Republic] to the next level and get them to the Olympics.”

Considering the pride that Towns’ family and followers in the Dominican Republic and in the New York area have toward him, his loyalty is understandable.

“My grandmother comes back with tons of newspaper articles from the Dominican Republic every time she visits,” Quezada said. “Everyone knows who her grandson is. I’m from Washington Heights, New York City, and he’s huge over there. He’s the most talked-about player in all the Dominican barbershops.

“When he played for the Dominican Republic at 16, I felt that was an introduction for him to the Dominican people. Not too many people knew who he was before that. Now in D.R., everybody loves him.”

“I’m not doing this just for myself. I’m doing it for everybody,” Towns said. “I’m just very blessed with the opportunity to play in the NBA at a high level. I am able to represent my culture well.”

Towns starred at the University of Kentucky for a season before being drafted with the No. 1 pick in the 2015 NBA draft. He averaged 18.3 points, 10.5 rebounds and 1.7 blocks per game last season, and has improved, averaging a double-double of 21.5 points and 11.5 rebounds through 34 games this season while scoring a career-high 47 points against the New York Knicks on Nov. 30. While the Timberwolves’ poor record will likely be held against him, an individually worthy Towns will learn whether he will be selected for his first NBA All-Star appearance later this month.

And once he gets some free time, Towns said, he hopes to learn Spanish fluently in 2017. He has asked his mom and sister to speak to him exclusively in Spanish to help further his growth. He hopes to eventually be comfortable conducting media interviews in Spanish and would like to return to the Dominican Republic next off-season.

“I understand Spanish, but I can’t speak it very well,” Towns said. “I understand what you’re saying so I mostly speak like a Spanglish. My grandmother, my mom and my sister speak to me in Spanish and I speak back in English.