Why Michael Jordan playing baseball was the coolest thing

Watching MJ in the minors was motivating for young ballplayers

Before the 1994 MLB season, Mike Huff got a phone call from his team asking him to help teach an unnamed player how to catch and throw a baseball and play defense. An outfielder with the Chicago White Sox at the time, Huff might’ve been instructing his way out of a job, but he didn’t have much choice. Being a solid teammate, he said yes.

Then, his student was revealed: Michael Jeffrey Jordan, the 31-year-old god of sports who had freshly retired from the NBA.

“So I’m going to help out,” Huff said of his decision at the time. “But when it’s Michael Jordan, then it becomes very easy to say, ‘yeah, this is going to be really fun to work with this guy.’ ”

Nowadays, Huff is still a member of the White Sox, working with youth teams around Chicago and running the Kid Zone at the ballpark. But his time with Jordan was a reminder of exactly what the transformation of No. 23 with the Chicago Bulls into No. 45 of the Birmingham Barons was: difficult as hell. Not to mention dope. 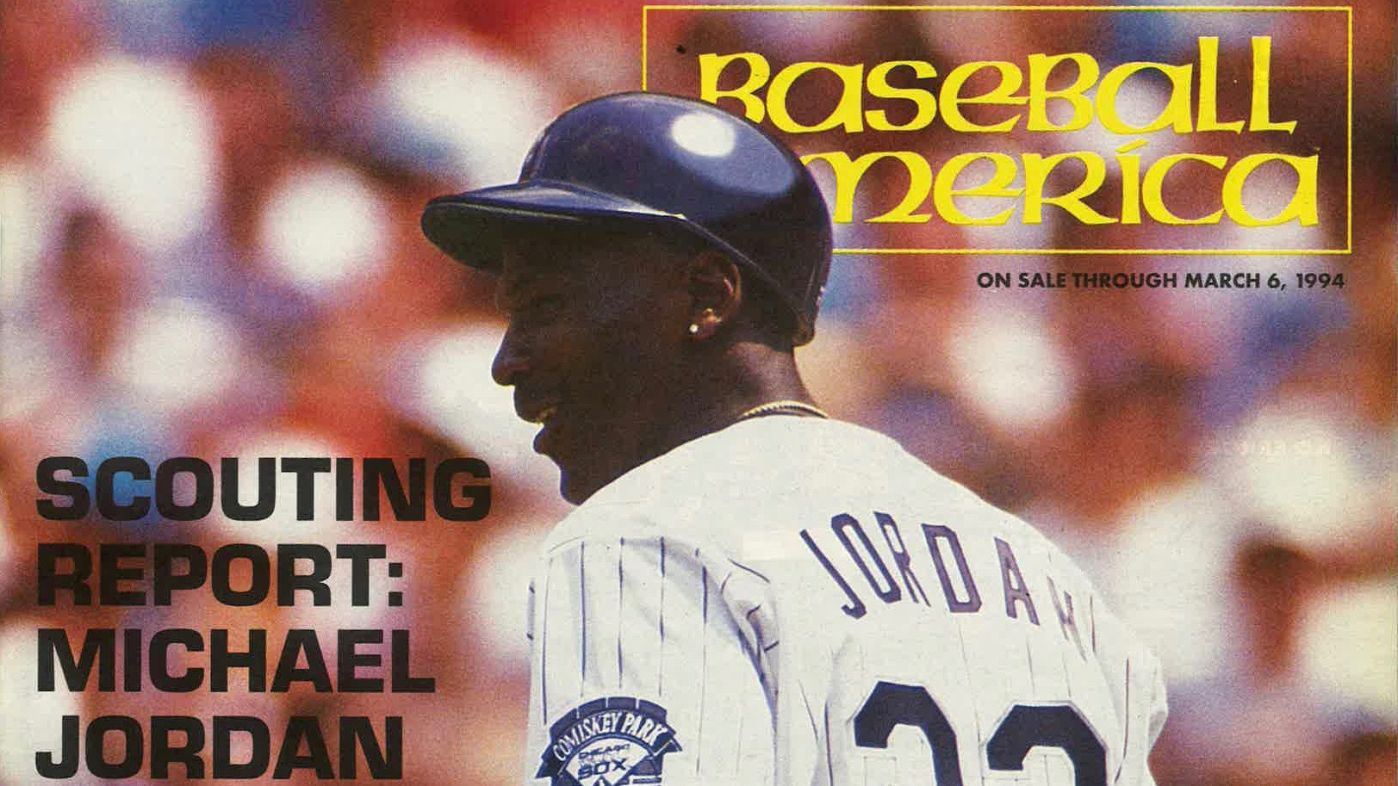 “My first thought was I’ve seen his moves on a basketball court growing up in Chicago and he had that basketball glide, basketball movement, but I didn’t really see baseball with the exception of that explosive first step,” Huff said. “We were together, December, January, February, heading into spring training. I was doing the best I could to get him to understand the communication role, to get him to understand the movements and — could that stride, think of a Dave Winfield, think of Devon White, all legs — could he get that basketball explosiveness into a baseball explosive.”

Perhaps it didn’t translate exactly on the diamond, but what did come across the TV screen was obvious: Jordan’s star power. And that wattage brought more than just eyeballs on baseball. It also reminded everyone of just how difficult it is to be a professional baseball player at any level, never mind the major leagues.

For a baseball-obsessed 13-year-old like me at the time, it was easily the coolest thing Jordan would ever do. Of course, Jordan was already on the level of Babe Ruth, Wayne Gretzky and Muhammad Ali. But I didn’t box, nor did I play hockey if it wasn’t on Sega Genesis, and I certainly didn’t care about the big leagues pre-integration. Nor was I from Chicago. Jordan on a baseball field was the most amazing thing my young shortstop eyes had ever seen.

Jason Goff, a longtime Chicago radio host and Bulls pregame and postgame host for NBC Chicago, was viewing it then from the other side.

“In this instance, so many people who couldn’t care less about baseball became highly aware, and the young black kids who rocked with the game were allowed to be the leaders in that realm of discussion,” said Goff, who is from the North Side of Chicago but has been a fan of the South Siders since he was a kid.

“My best buddy Laplace played little league every year and I was super envious because my parents didn’t put me in the mix. … All of a sudden Laplace and I started talking about baseball and he probably had no clue why I was interested as much in that moment. It was kinda because he and I had a commonality finally. It was Michael Jordan.”

What often gets lost in the narrative about Jordan’s sojourn with the Barons in the Southern League and the Scottsdale Scorpions in the Arizona Fall League, is that what he accomplished in a short period of time was not only remarkable, but incredibly motivating for young black ballplayers.

Yes, the ’90s had plenty of incredible African Americans in baseball. A good number of them played in the outfield right there on the South Side. Tim Raines, Lance Johnson and Ellis Burks were the starters for the White Sox. (Huff was the defensive replacement for those three dudes, which is why he had time to teach.)

But if Jordan was cool, and if Jordan was playing baseball, for a hot second the sport was cool. And nowhere was that more clear than the 1994 Windy City Classic, an exhibition game between the ChiSox and the Chicago Cubs at Wrigley Field.

Legendary Cubs broadcaster Harry Caray was beside himself. For all the wacky shtick that the bespectacled Hall of Famer made famous, on this day, his glee and enthusiasm were nothing but real. He wasn’t a kid in a candy store, he was a grown man talking to a sports hero, and he couldn’t hide it.

“I’ve been around this game for 50 years, and this is the biggest thrill of my life,” Caray said, shaking his head in disbelief on WGN, as he interviewed Jordan. “Just seeing you in a baseball uniform.”

The most famous character in Cubs history openly fawning over a White Sox player? That alone was incredible. And then the game happened.

Jordan caught a ball in right, but also had an error early on. Then he knocked in two key runs and scored on a homer after reaching base on a double. On the first RBI, the announcer said, “Jordan with an RBI single, how about that!” The thrill was palpable. When he trotted halfway around the bases after another player hit a home run, the broadcast showed Jordan’s trot for more than half the clip.

There’s no overstating this — that day something happened that probably never has or will happen again in Wrigley Field history: A White Sox player received a standing ovation. That alone tells you how exciting this was for baseball fans.

“I think what it does is really give credibility to the game of baseball as a whole,” Jordan told Caray before that dazzling performance. “A lot of people view me as a decent athlete, and yet, I’m trying to come out and show, well, I found that these athletes, these professionals are athletes, and yet it takes a real good talent, exceptional talented player or person to come out and do this.”

My teenage self felt that. It hit differently for Jordan to describe the sport you love and play as requiring exceptionalism to succeed.

“Not gonna lie, like Mike invigorated this great love [for baseball],” Goff said. “When Jordan started playing baseball, I know of plenty kids who were then introduced to Ken Griffey Jr., Frank Thomas, David Justice. All of this while wondering if he was taking someone else’s spot who was maybe more deserving because of all the analysis I tried to consume. It was a fascinating time to be coming-of-age. Things like this will never happen again.”

One guy who knows a ton about this is Darrin Jackson. Colloquially known as the guy who had his job taken by Jordan — a slightly unfair description — in 1994, he was a journeyman playing regularly in right field for the White Sox. By 1995, he was playing in Japan.

His days around Jordan, however, were not resentful.

“I’ve been around a lot of great athletes,” Jackson recalled of that season with Jordan in the wings. “So it was impressive to be around him day in and day out and watch his work ethic and how hard he wanted to make sure that what he was doing out there on the baseball field was not a joke, because he was taking it serious, and his intent was to be a big league ballplayer.”

While that didn’t pan out, the maligning of Jordan’s baseball career is absurd. Double-A baseball is no joke. And for a man in his 30s to be actively decent is incredible. Even for Jordan, who batted .202 but had three home runs, 51 RBIs and 30 stolen bases.

aka, not low key garbage https://t.co/TformXySgl

“If you looked at that league, I’ll bet there weren’t but 10 players, maybe 20, that had 30 stolen bases, more than likely 10. MJ had over 50 RBIs,” Huff noted of Jordan’s time in Birmingham, Alabama. “So he was being productive. And then again, he went to the Fall League. He hit over .250 there playing against better competition.

Terry Francona, now manager of the Cleveland Indians and the skipper who led the Boston Red Sox to a World Series title in 2004, was Jordan’s manager in Birmingham. While it’s a fun piece of trivia for baseball nerds, at the time, Francona was basically winging it.

“You gotta remember, man, I was 34 years old in my second year managing in AA,” Francona told me on Baseball Tonight Live last week. “Shoot, I was just happy the games were on the radio, and just trying to survive and learn. And I got put in the greatest learning experience you could ever be put in. Michael treated the game with so much respect, that it worked. And I give him so much credit, because of how he treated the people in the game, and the game, it always worked.”

In Jay-Z’s classic banger “Encore” from The Black Album, he says, “When I come back like Jordan, wearing the 4-5, it ain’t to play games with you, it’s to aim at you.” Of course, it’s a reference to Jordan returning to the NBA to torch the league. But if you know the game, you know that what Jordan was actually going back to with that number was Laney High School, the last place he’d played organized baseball before joining the White Sox organization.

What did Jordan do wearing 45 in high school? Just like so many other brothers, he played for fun. The same reason that so many of us always have, and always will.